At this point I'm fairly certain I've watched this movie more times for the sake of this site than I have because I actually wanted to. Each time I come away with a different opinion, where the first time I reviewed it (as part of my Star Trek Overview) I hated it, the second time (for a proper review) I put it in the top five of the series. So when I went into this project to cover every bit of Star TrekOriginally conceived as "Wagon Train in Space", Star Trek was released during the height of the Hollywood Western film and TV boom. While the concept CBS originally asked for had a western vibe, it was the smart, intellectual stories set in a future utopia of science and exploration that proved vital to the series' long impact on popular culture. I could, I knew I needed to watch this film again and see where on the scale I felt it rated now, years after it came out. 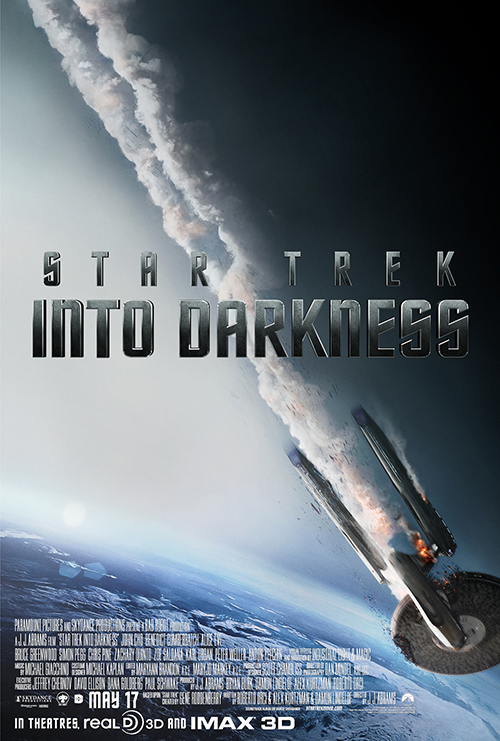 In honesty, it's probably somewhere in the middle, although I do think it's largely better than it's reputation. Picking up some time after the events of the 2009 reboot, Into Darkness see the crew of the Enterprise working to stop an active volcano was wiping out the sentient civilization just starting out on a new planet. While the crew is able to save the people, they do it at the expense of the Prime Directive, accidentally exposing the tribal, pre-warp people to the Enterprise. This doesn't sit well with Starfleet when they hear about it, although they don't hear about it from Kirk since he didn't make any mention of it in his official report. Lying on the report was only the last in apparently a whole line of incidents where Kirk disobeys the rules and laws of Starfleet, so they elect to demote him and strip him of his command, giving the Enterprise to previous commander Admiral Pike.

Pike does at least intervene and make Kirk is second in command. Incidents, though, are set to change everything again as a terrorist attack on Starfleet brings a bunch of commanders together (including Pike and Kirk) for a con-fab. Then the terrorist attacks the meeting, killing Pike in the process. Kirk, pleading to the Fleet Commander, Admiral Marcus, reclaims the ship so he can go after the terrorist (who managed to beam himself, via trans-warp tech) all the way to Klingon space. So the Enterprise has to fly out after him, kill (or recapture him, although officially just kill), and head back to Earth. Only one small problem: nothing is at it seems. Oh yeah, and the terrorist is Kahn.

Each time I watch this movie, my first reaction is always, "did we really need another Kahn movie." When handled right, Kahn can be a great villain. The thing is, he's already been handled right. Twice even. Once in the Original Series episode, "Space Seed", and then again in Wrath of Kahn. The reason why Kahn work in the TV series was because he played on the fears of World War III and nuclear annihilation. An insane ubermench genetically engineered to rule the world, who then causes a mass war that nearly wipes out humanity? That's pretty scary, and for him to come back and threaten to do that again, that's truly powerful stuff. Bringing him back the first time around, back in Wrath worked equally well because so few would remember Kahn, lending him time to be forgotten to come back with a vengeance.

Now, though, Wrath of Kahn is often considered the best of the series (even if we astronauts at the Asteroid G headquarters think Star Trek VI is better). No one is going to forget Kahn, so for a movie to revisit that well again, they'd have to have a pretty epic story to tell, one that really uses Kahn in a new and special way. 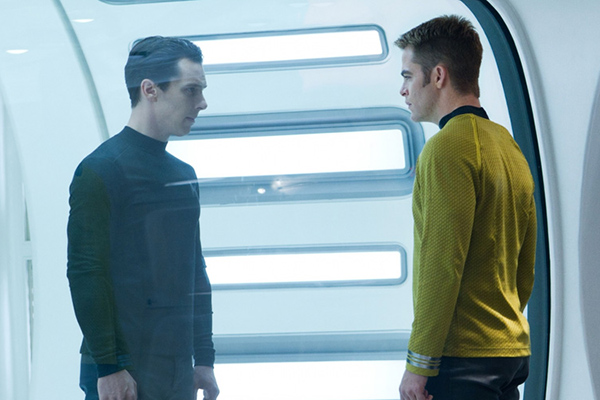 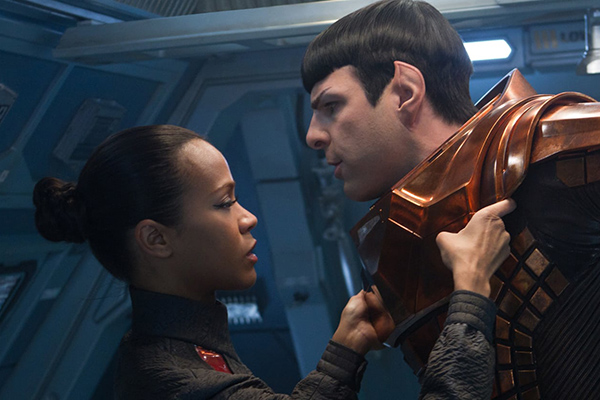 The movie almost pulls it off, too, which surprised me. There are moments where Into Darkness is able to use the elements of "Space Seed" and Wrath and reinvent them in interesting ways. Due to the time travel shenanigans that launched the new version of the universe, everything is thrown off. Kirk and crew aren't the ones to discover the Botany Bay, Kahn's ship -- no, that was done under the directive of Admiral Marcus as he commanded Starfleet to prepare for whatever new threats might show up (especially those more powerful ones from the future). This then further shifts events, allowing Kahn to create weapons, strategize, and prepare for a time where he can double-cross everyone, reclaim the frozen bodies of the rest of his crew, and take over the galaxy. That's a great twist, and on its own it really could have worked.

But, when it comes to Kahn, the movie just seems kind of lost. Kahn isn't really the villain of the piece, he's just an agent, a deus ex machina to do the bidding of the real villain, Admiral Marcus. The problem then is that Admiral Marcus is never given enough weight to be a true and powerful bad guy. He always feels like he's competing with Kahn for the role, and Kahn is given more screen time. Kahn, though, doesn't have any agency in this movie, since he's blackmailed to do the Admiral's bidding. They essentially are always fighting, back and forth, for the role of the main antagonist, sucking the oxygen away from the other, leaving both compromised.

Kahn has a story that could work in this film, being the agent of someone else but always fighting to reclaim his agency. He could have even made a compelling third protagonist (along with Kirk and Spock), an anti-hero who redeems himself. The movie isn't interested in that, though -- he's Kahn, so he has to be the bad guy, right? Any time it seems like the crew can trust him, we the audience are left waiting for the other shoe to drop, which it will, because he's Kahn. Just making the vilain Kahn robs him of any chance to be more than a shadow of the villain we already expect him to be. The film uses shorthand for the villain based on what we already know about him from the old timeline, which then means he's never compelling in his role because we never, for a split second, believe he'll ever do anything other than what he's done before.

On the side of the heroes, at least, things do fare better. Kirk and Spock bicker and fight, but the chemistry between the two lead, Pine and Quinto, sells every scene between these characters. There's real affection there, so we believe they are great friends even though we've only had one movie before this to sell this version of the friendship. Bones (Urban) still doesn't get a lot to do, but he does get to be part of one of the classic Kirk-Bones-Spock debates, and it was nice that the movie at least tried to nod in that direct. Better are Sulu (Cho), Scotty (Pegg), and Chekov (Yelchin), each of whom get great scenes, and some sub-plots, to allow their characters to shine. 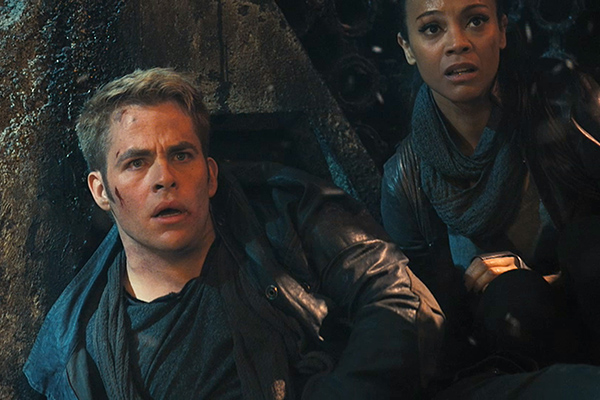 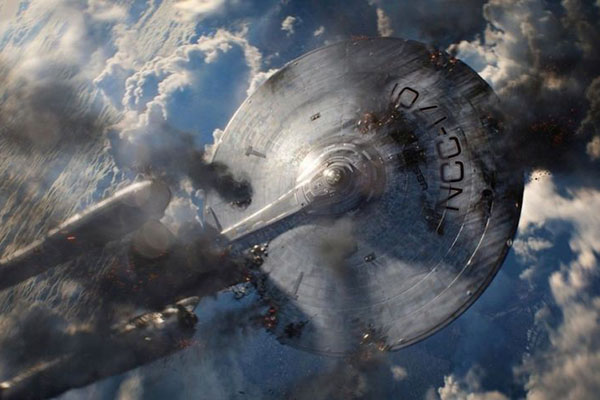 Sadly, the same can't really be said about the female castmates. Zoe Saldana does great work investing Uhura with real emotion, but she does even less as a communications officer this time around, relegated largely to the role of Spock's love interest. Every scene she's in is basically about her as she related to Spock, without much for her to do on her own. Then there's "new" character Carol Marcus (Alice Eve) who's in this movie simply because the older version of her was in Wrath of Kahn. She's supposed to be a science officer and weapons expert, but the most she really does is play the pretty face to distract Kirk or act as a foil for her father, Admiral Marcus. Like Uhura, her time on the ship is spent dealing with situations as they relate to male crew members not what she can do to further the mission. Clearly the producers didn't feel like she was that important to the series since Carol wasn't brought back to the third reboot film.

There are any number of places the movie could have been better -- focusing more on Kahn, or the Admiral, for starters, and then either not introducing Carol at all or making her much more integral to the plot -- and they there are moments where the movie really shines. There's an exchange late in the movie, for instance, where Kirk and Spock have a great, dramatic moment. It's a call back to the earlier moments in the Kahn epic, and the two leads infuse it with such emotion. Then there's an action sequence where the gravity of the ship goes out and the people start shifting and sliding as what's horizontal and vertical are constantly shifting -- that sequence is a real show-stopper. If more of the movie could have had those moments -- big set pieces that were well plotted, emotional moments that allowed the movie to slow down as it earned the dynamics, I think the film would have been even better.

So I'm torn. I've watched a lot of crappy Trek movies at this point because the series, for all its great heights, has had a lot of stinkers, too. I do think Into Darkness is better than it's given credit for, a good flick that easily out-paces half the movies in the series. It's not a great film though, and as much as I like it the film never really illustrates why it had to be a Kahn story. Any other villain would have been better, and that's what keeps it from being truly epic. The film was hobbled by a need to retread old territory when it should have just found a truly new story to tell.