The Best Star Trek Movie to Not Bear the Name

I think it's fair to say that Star TrekOriginally conceived as "Wagon Train in Space", Star Trek was released during the height of the Hollywood Western film and TV boom. While the concept CBS originally asked for had a western vibe, it was the smart, intellectual stories set in a future utopia of science and exploration that proved vital to the series' long impact on popular culture. has not seen a large number of parodies. When you compare it to Star Wars, which has embraced its own fan culture and allowed any number of parodic works to be created (Lucas was reportedly a huge fan or SW comedy), Trek has a relative dearth. There are a number of famous Star Wars parodies, from the Robot Chicken and Family Guy specials, to, of course, Spaceballs, but what does Trek have? Well, porn parodies (like SW), and then an episode of Black Mirror, and maybe The Orville, and... 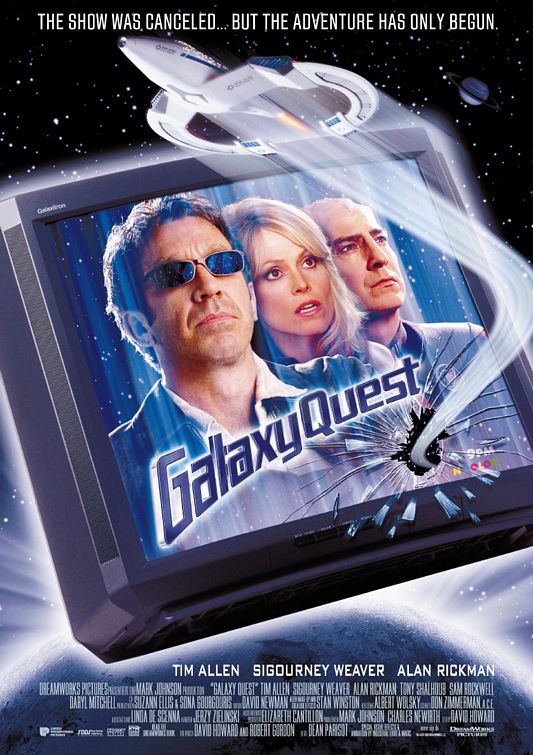 Well, yes, Galaxy Quest. In the realm of Star Trek parodies, our discussion really begins and ends with the crew of the NSEA Protector. That's not to say there haven't been other attempts (a series from the 1970s, Quark is attributed as a Trek parody), but Galaxy Quest was such a loving parody that perfectly sent-up all the conventions of the originating franchise that it pretty well sucked the air out of the room for anything else. It's safe to say that because of how well Galaxy Quest did it's parody, productions like the Black Mirror "USS Callister" episode and the recent series, The Orville owe a debt to GQ -- without that movie paving the way, showing how a Trek parody should be done, would the others have been made?

That's not to say that Quest is a straight parody of the original series. In the realm of parodies, GQ plays around as more of a winking meta commentary on the source. In the movie, the series "Galaxy Quest" was a TV show that aired in the 1980s -- it is essentially Star Trek for this version of the universe. We catch up at a Quest convention 18 years after the original show went off the air with all the actors having show up to sign autographs and talk with fans. The actor that gets off on the attention is series lead, Jason Nesmith aka Captain Peter Quincy Taggart (Tim Allen). Nesmith loves the attention but also seems to think that everyone, including his other cast members, love him back. He gets shaken a bit, though, when some jerks at the con inform him of how little the world really likes him, which causes him to storm out of the convention.

However, when a group of fans (who actually turn out to be aliens) show up to take him to a "gig", Peter ends up on the actual NECA Protector (well, the Protector 2 that the aliens have built). As we learn, the aliens received transmissions of the old Quest episodes and took that as actual "historical records". They built all their technology to mirror the series they were watching, and essentially rebuilt the entire Quest universe with real, actual, working technology. Peter doesn't realize this at the start, but once the alien request his continuing help, he manages to drag his entire cast along for the ride into outer space. 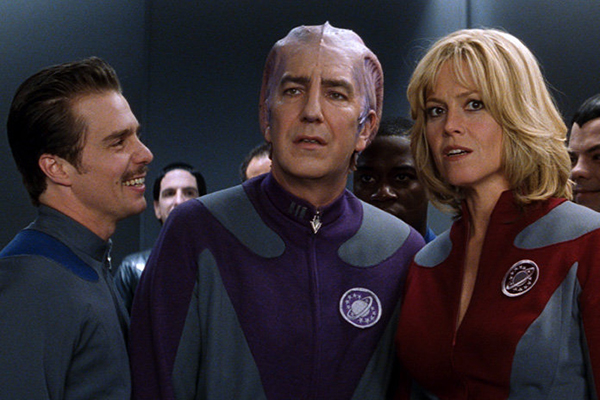 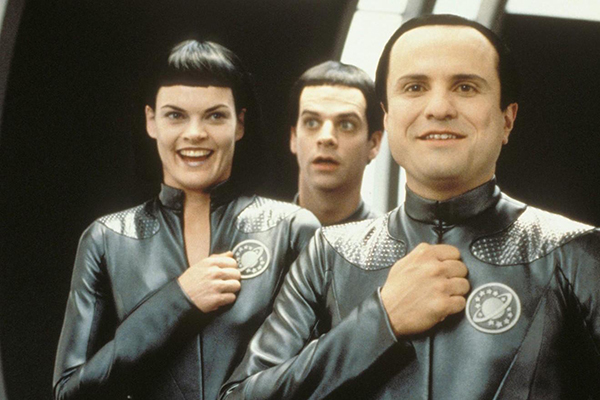 The biggest reason Galaxy Quest works is because of the cast. Along with Allen (an actor we should probably have a discussion about in a separate article), the movie also has: Alan Rickman's delightful acerbic British thespian/Vulcan stand-in lexander Dane/Dr. Lazarus; Sigourney Weaver as the put-upon, in over-her-head Gwen DeMarco/Lt. Tawny Madison; Tony Shalhoub as the eternally Zen Fred Kwan/Tech Sgt. Chen; and Sam Rockwell as Guy Fleegman, a bit-actor who got a whole 6 minutes of fame in one episode of the show before his character, Crewman #6, was bumped off (like a good Trek redshirt). Beyond the meta commentary baked into these characters -- the female castmate who had the most menial task on the ship; the glorified extra, who was also a fan of the show, expecting (and correctly predicting) danger around every corner (usually designed to kill him first) -- there's a lot of great humor mined from the chemistry of these characters.

To say the cast is loaded with a lot of fantastic, funny, famous people undersells it. So many bit players in the movie would go on to be huge names, such as future Dwight Shrute on The Office, Rainn Wilson, and Missi Pyle (who for a while there was in everything), both of whom play aliens on the Protector. Biggest actor among that crew, though, was Enrico Colantoni as alien leader Mathesar, and Colantoni is in everything it seems (like Veronica Mars, Person of Interest, Flashpoint and on and on). Colantoni is so perfect in the role of Mathesar, playing the character was warm yet completely alien. Seriously, he can mine laughs out of little movements and weird trilling noises of shock. He sells the material better than practically anyone else in the cast, making you really think of these guys as aliens.

That's not to say that the meta-commentary doesn't also get a lot of laughs. There are any number of times the show makes a sly reference to the original series that leads to a gut-busting scene. There's a long sequence in the underside of the ship as Peter and Gwen have to race through the bowels to stop a self-destruct, and the movie is able to comment on fandom, merchandising, and stupid episode plotting, all while very rarely drawing attention to any of it. The way the movie blends its comedy and story in with Star Trek beats simply masterful. It's hard to not oversell this movie because it gets so much right.

It's worth noting that this movie isn't in any way an officially licensed parody. Everything is changed enough that it's clear Paramount had nothing to do with the original production (although, amusingly, production studio Dreamworks is now owned by Paramount, so in a round-about way the film is now officially "Trek"). Everything about the film is lovingly crafted to evoke the feeling of Trek, to winkingly nod at Trek without, in any way, being Trek, and the fact that it's able to do it, to walk the tightrope without getting to the point of looking at the screen and saying "eh, see what we did there" (you know, like what happens so often in Spaceballs) is what really sells the film. 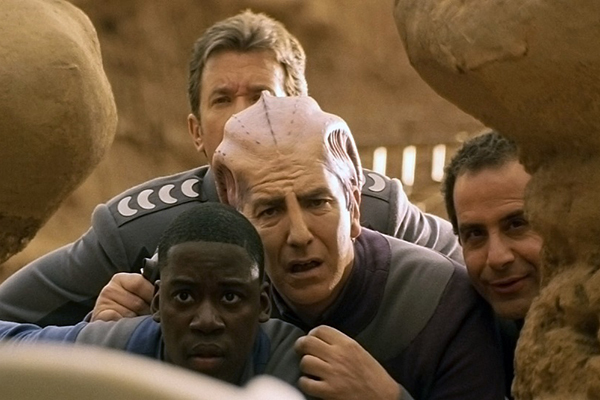 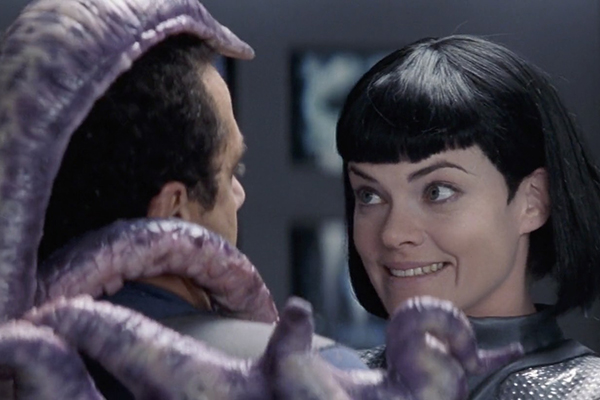 Many have called Galaxy Quest the best Star Trek movie ever. While I don't know if I'd go quite that far (certainly there are small things I'd punch up, like the villain who never quite seems like as big a threat as he sold), it certainly ranks up on the list (you know, if you're willing to fudge it onto a list to begin with). Current Trek producer J.J. Abrams listed it as his favorite Trek movie, and it's regularly listed near the top of fan-voted lists. It really is such a loving tribute, one that doesn't denigrate the source material as it pokes fun.

So yeah, the next time you're sitting there going, "you know what I want to watch? Some Trek," maybe also put this film on as well. It's an enjoyable romp, and hilarious adventure, and one of the best, most loving meta-parodies around.