The Next Gen movies are a bit of a mixed bag. As we already saw from the first on, Generations, they could very quickly get silly and stupid. To be fair, though, the classic movies could also very quickly get silly and stupid (case in point Star Trek V). Negative feelings the fans may have towards the Next Gen run of films likely comes not from a comparable quality to the original films (which had its good and bad entries) but from the fact that Next Gen only got four flicks, two of which were middling, and the last one being so bad it ended that era of the franchise. 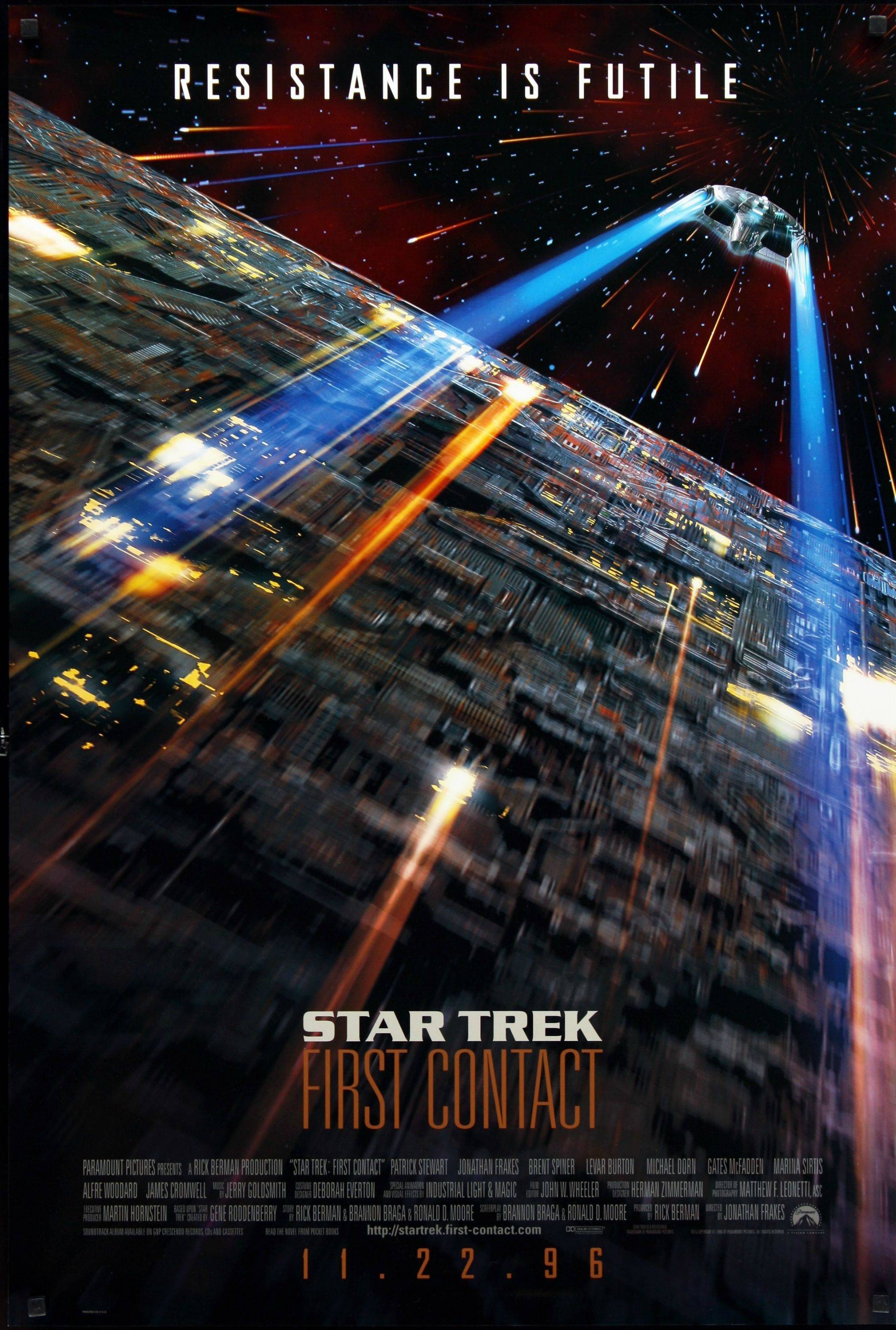 Thankfully, no matter how bad the series got eventually, we did get one pretty decent Next Gen flick: First Contact. A semi-sequel to the Next Generation two-parter "The Best of Both Worlds", First Contact finds the Enterprise E drawn into a battle with the Borg after a Borg cube infiltrates Federation space. The Enterprise is able to turn the tide of the battle, but as the cube explodes under the brunt of the damage, a sphere is launched. This Borg sphere then attempts to transport itself back in time with the Enterprise caught in its "wake".

We then bounce back to the late 21st century where we find the Borg attempting to stop one of the great events of human history: the first successful warp drive test. This warp test directly led to the Vulcans coming to Earth to deal with humans -- if the Borg were able to stop the test, the Vulcans would never show up, humans would remain isolated in space, and there would be no one to aid them if the Borg started taking over the planet. But with the Enterprise E in the past, the crew is able to stop the Borg's immediate threat. However, matters aren't immediately settled as a number of issues quickly arise: the first warp ship, the Phoenix, is damaged; the Borg have somehow transported to the Enterprise E to take over; and there's some new kind of Borg, a Borg Queen, seemingly calling the shots. The Enterprise crew will have to band together and fight this battle on several fronts to ensure their future truly comes to pass.

First Contact is a bit of an odd beast. In some ways it wants to be Next Gen's Wrath of Kahn. Like how "Space Seed" and Kahn relate to each other, First Contact really wants to give us new insight into, and a big revisit of, a big event in the Next Gen era. Picard being taken by the Borg was a big deal in the series, and revisiting that storyline certainly seems like an interesting premise on paper. Certainly, in small doses, the Borg are chilling villains, one of the best Trek has come up with.

The problem is, though, that the story of Picard and the Borg we gain from this movie doesn't really align with the Picard we'd already seen in the past. I'm not going to argue that being captured by the Borg wouldn't have long-term effects on the guy, but the series went out of its way to show him getting over it. Hell, we spent an episode, "Family", giving Picard some kind of closure, and from that point forward he seemed better. He certainly didn't go into this raging, "Captain Ahab" mode (per the movie's own words) back in the series, so this plotline feels out of character, like the writers really wanted to make a movie-sequel to "The Best of Both Worlds" and felt the need to cram it in any way they could. 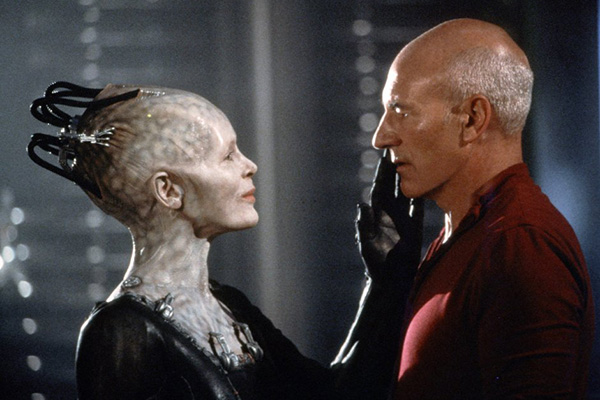 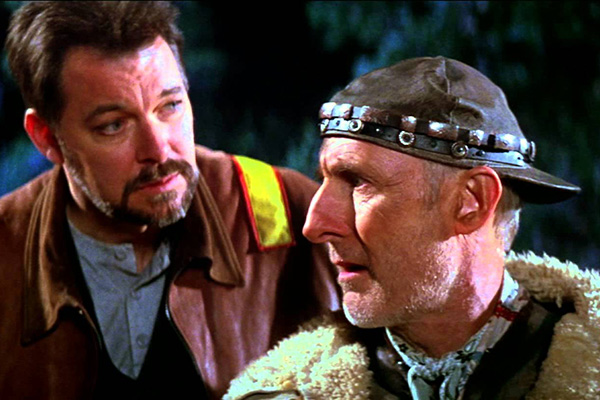 This is also reflected in the big retcon of the movie: the Borg Queen. As we learn in the film, the Borg are not only a hive mind, with each Borg essentially a drone to the collective, but they have a central Queen. She controls the Borg and is, essentially, their singular brain (she even refers to herself as "I" instead of the standard Borg "we"). Picard eventually realizes that the Borg Queen was on the cube that captured him years back, this despite the fact that the cube was blown up. She is, essentially, in every cube, everywhere, operating all of them at once. While this certainly gives the Borg a singular villain, someone for the Enterprise crew to fight, this is the kind of weird revelation that doesn't really make sense when we go back and think about it. If they always had a queen, why did the Borg act the way they did in the past. Shouldn't they somehow be more coordinated, better capable of recognizing threats and dealing with them instead of continuing to operate like a dumb hive?

Not to say that the Queen isn't an effective villain on her own. She's certainly dark and creepy, with actress Alice Krige vamping it up, relishing playing such an evil character. It's just that for a villain like this to truly work there has to be history to the character. The Queen is someone we've never seen before, a new entity that is supposed to have the weight of history behind her because of the overall threat of the Borg that's been felt throughout Next Gen. But the Queen is not Kahn, she neither has the appearances nor the weight of proper history behind her to make us care who she is or the kind of threat she imposes. The franchise would go on to reuse the Queen in various episodes of Voyager, and I'm sure in these later appearances she was probably a more impressive threat. Here, though, she's a one-off villain who has to cram her entire origin story and big plan all into a single story. It doesn't quite work for me.

On the flipside, I guess it is nice to get a villain that isn't just the Klingons yet again. We can at least be thankful for that.

While Picard and some of the crew deal with the Borg Queen, the rest of the team (led by Riker) are planet-side, doing their version of Star Trek IV. This storyline is another retread of "characters go into the past to save the future", which we'd already seen in movie four, let alone in a number of episodes of The Original Series. Don't get me wrong, it is fun to watch the crew hanging out in the past (even if it's a "past" that's actually still in our future even now, 20-ish years after the film came out). This section of the story is light and fun, with the cast clearly enjoying themselves. The film thankfully eschews the campy humor of Generations, playing the comedy with a lighter touch this time around. And it is certainly interesting seeing the first warp drive test in Federation history. It's a neat little plotline. 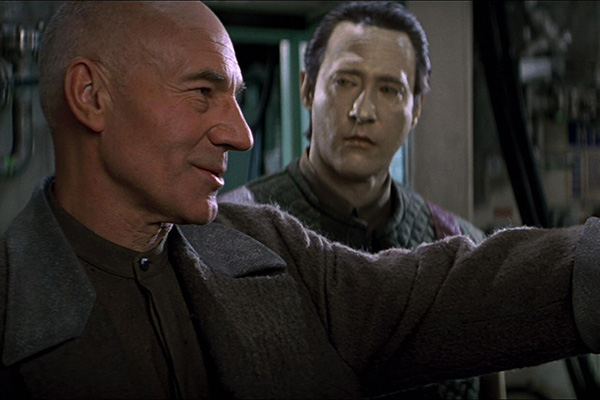 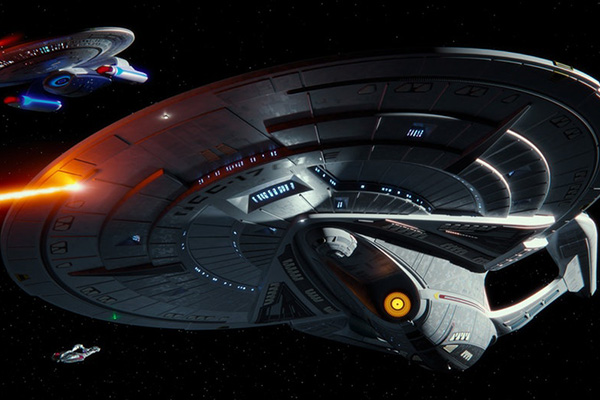 The big issue is that it just doesn't mesh with the rest of the storyline. In a way, First Contact is two films grafted onto each other. One is a dark war story about the Borg taking over the Enterprise E while the other is a light and frivolous adventure about saving humanity and enjoying the past. By the setup of the story to two plotlines don't really intersect at all, leading to some weird tonal issues as we cut back and forth between them. I'm not arguing that the movie should have been all grim-dark Borg or all happy-go-lucky time travel, but there's a serious disconnect in the story with the two halves never quite gelling together.

First Contact is, quite often, a fun movie. It has thrills and laughs and plenty of good moments with the cast. It's a good flick, it's just not a great one. It's damning with faint praise to say its "the best of the Next Gen run", but that's really where it stands. I don't think it quite comes together to stand with the greats of the classic movie series, but it's certainly better than any of the other films in this crew's run.