Is That More of a Purr or a Murr?

During the big Star TrekOriginally conceived as "Wagon Train in Space", Star Trek was released during the height of the Hollywood Western film and TV boom. While the concept CBS originally asked for had a western vibe, it was the smart, intellectual stories set in a future utopia of science and exploration that proved vital to the series' long impact on popular culture. review project, we had to skip a few of the more popular episodes largely because I'd already seen them before and I really wanted to get a feel for the parts of Trek I hadn't seen. Still, going through the whole series like that, I knew we'd have to eventually go back and watch the popular episodes just for completeness sake if nothing else. 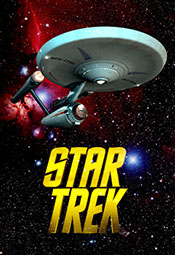 Thus we begin with the fan favorite episodes, and probably the most famous ones of the whole run: the tribbles. Each of the tribble episodes (of which there have been three official entries) are played for human, delightful little larks to break up the more serious plotlines the show could handle. And they really are quite funny. It's no wonder these are fan-favorites.

There are three official tribble episodes from The Original Series, The Animated Series, and Deep Space Nine. Since that's a relatively small amount to review, we're going to go over all of them:

The Original Series, Season 2, Episode 15: The Trouble with Tribbles

While on patrol, the Enterprise crew gets a Priority One distress signal. Heading to the source of the call, Deep Space Station K7, Kirk finds that his crew has been summoned not to fight a battle or defends territory but simply to act as guardians of grain. The nearby Sherman's Planet is prized by both the Federation and the Klingons, and the Federation settlers need the grain to survive. Thus, the mission is of the utmost importance to Federation Undersecretary of Agricultural Affairs Nilz Baris (William Schallert), even if Kirk is rather annoyed at the impertinence of the man.

Giving most of his crew shore leave, Kirk accidentally starts a whole new problem. Uhura finds a cute animal, the tribble, for sale by Cyrano Jones at the space station, and she brings it back to the ship. The tribble, though, is a very prodigious creature, multiplying at an alarming rate. Soon the ship, and the space station are overrun with the cute, purring creatures. Something has to be done about the tribbles, but something also has to be done to stop the Klingons and the machinations towards the grain. And, before too long, both plotlines intersect... 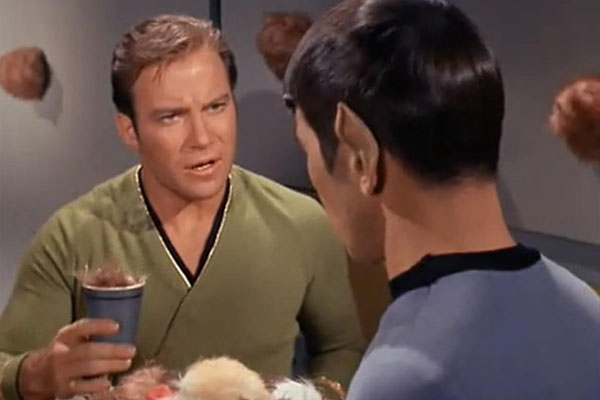 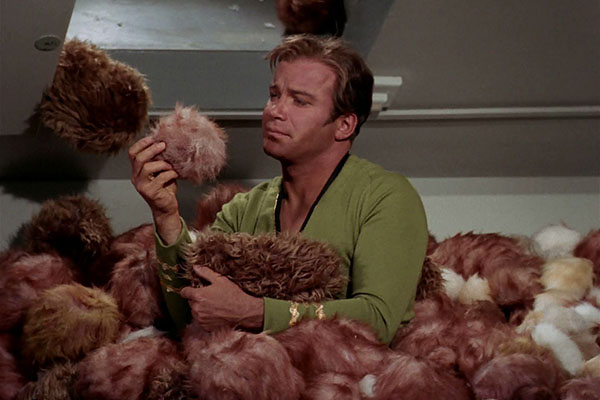 I've seen this episode multiple times and yet, going back now to watch it again, I was struck once again by how funny the episode is. Most episode of Trek tended to have a little bit of humor -- breaking tension with a joke once in a while can actually help to up the tension (as many horror movies have proven). Occasionally, though, the series would do an outright funny episode, and "Tribbles" certainly stands at the head of that pack. There are so many great moments, most of the headlined by Kirk. Shatner was in great form in this episode, giving such a well done, put-upon performance that only heightens the humor of these dumb, fuzzy creatures.

The plot of the episode is pretty threadbare, and the mystery of the grain (and what eventually happens to it) is barely a consideration. All of this is true, but you just don't care while watching the episode. You're laughing along with the antics, amused as much by the verbal word-play of the characters as by Shatner's straight-man act. It's a silly trifle of an episode, and that's why it works so well.

While on a mission transporting grain to Sherman's Planet, the Enterprise comes in the cross fire between the Klingons and an unknown Federation vessel. The Klingons blow up the other ship, but not before the Enterprise crew is able to transport the pilot off of it. The pilot is Cyrano Jones, and he has a new breed of tribble, one that has been genetically engineered not to breed. The Klingons demand that Kirk send them Jones, and to force the issue, they use a new, immobilizing ray on the Enterprise, preventing the ship from fighting back. Kirk and his crew will have to find a way to outsmart the Klingons once again, all while something very strange is going on with the tribbles.

This episode provides and interesting case-study in the differences between The Original Series and The Animated Series. Both episodes deal with very similar subject matter -- tribbles -- with the latter, animated episode serving as a direct sequel to the classic ep. Both also feature scripts by the same writer. And yet where the original episode is a hilarious lark, the animated sequel barely elicited even a smile from me. Much of that is due to the limits of the form as well as the shoddy work on the episode itself.

As I noted when discussing "The Trouble with Tribbles", much of the humor of that episode came from Kirk, acting as the straight man while zany things happened around him. Shatner manage to mine great humor out of simple reaction shots, letting his face and body language do the comedic work. That just couldn't happen in "More Tribbles", though, because the animation of the series was so basic. There were only so many poses for the various characters since the animation was so cheap, so any reaction shots of the captain were just the normal reaction shots we see scattered throughout the series. He wasn't playing straight man, he was just a dull figure upon which pink fluffy orbs bounced. 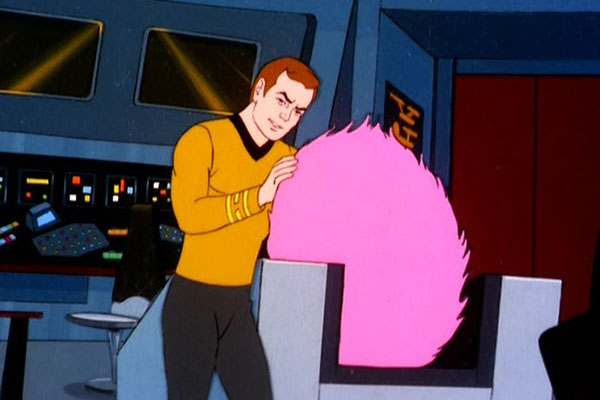 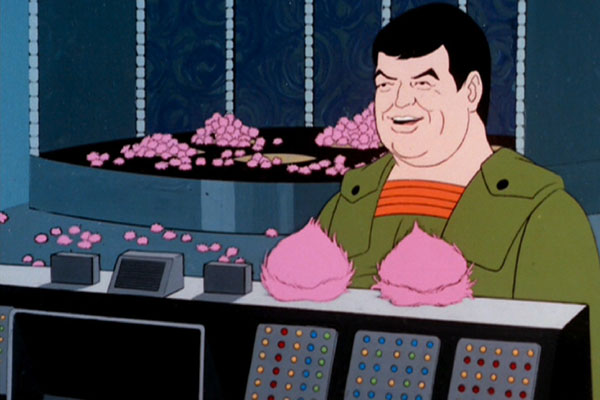 But then, so much of the animation was shoddy that there just really wasn't a way to make any part of this episode work. The space battles in the episode moved like molasses, mostly because the animators were stitching together whatever random shots they could easily make, drawing out the scene to fill time. Comedy requires fast story-telling, quick action, whereas an episode of The Animated Series generally had neither.

If, as the original writer once noted, this episode had been produced for the third season of The Original Series as intended, it might have actually worked. In The Animated Series it's just a waste of a halfway decent story idea.

While transporting a Bajoran Orb (an ancient artifact, usually with some kind of mystical power), along with a refugee from the Cardassian system, the Defiant suddenly experiences a power surge. Once their sensors come back online, they find they've been transported 200 light years from their original course... and nearly 100 years in the past. The ship is outside Deep Space Station K7, and there's the original Enterprise. What happened is that the refugee they picked up was actually Darvin, the undercover Klingon agent from the original "Tribbles" episode. He's used the orb, which just so happens to be the Orb of Time, to warp himself, and the rest of the ship, back to the events of that adventure all so he can get his revenge on Kirk. The Defiant crew has to search the Enterprise and the space station (wandering through past events) to stop Darvin from changing events, all so they can save history.

This episode works as a much better sequel to the original "Tribbles" episode than the animated one. Since the episode is set during the events of the original story, we get to have an adventure where the Defiant crew is literally in the same scenes with their past counterparts. It's amusing to see as they get stitched into key scenes from the episode, and "Trials" gets a lot of mileage having the Defiant crew comment on past events.

None of the cast gets more to do than Dax since she lived through this era in her previous hosts. She gets to comment on Kirk, on Spock, and Bones, sharing stories (and more than a few sexual anecdotes), mining a lot of humor from her past history. Terry Farrell clearly enjoyed playing her character in these scenes which only helps to heighten the humor of the episode. 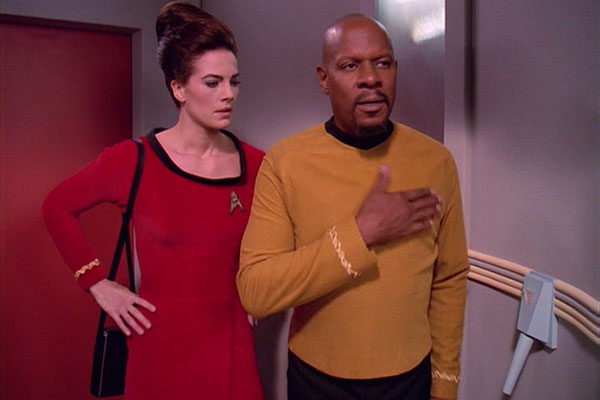 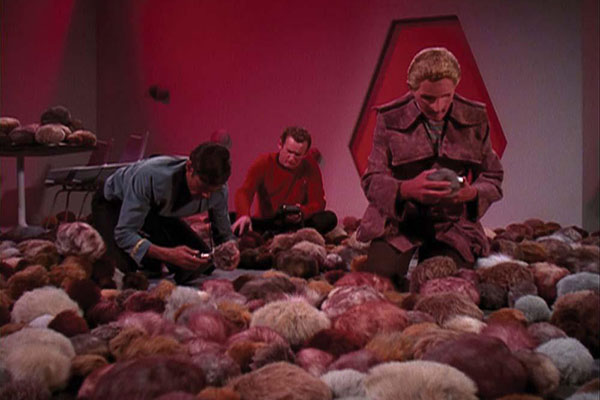 And it is a very funny episode. Much of the humor, of course, is seeing the Defiant crew in the original scenes, dropped in via "the magic of green screens". But there's great stuff all around. Little gags repeated from the original episode, notes and jokes playing riffs on the material. It all works so well, ad is so fun to watch.

About the only knock I have for the episode is that it doesn't really enhance the original that much more. While it's a fun story, it doesn't change our perspective on the original episode, nor does it inform our characters about new things they didn't know. It's a fun parallel story, but not an essential one. Still, sometimes all you need is some humor to have a good time. And, certainly, it's a better episode than "More Tribbles", and that's not nothing. It's a triffle, but a fun one.

Only the first of the "Tribbles" episodes is really essential viewing. It's the funniest of the trilogy, the best crafted and the most amusing. Skip the animated episode as it's a complete waste, but enjoy the DS9 episode, at least once, for the fun the crew is clearly having.

Although these are the only three episodes to officially feature the furry little omnivores, the tribbles have cameoed in other episodes. We get a glimpse of a tribble in Star Trek III before a Klingon feeds one to his targ. They also show up in Enterprise as Dr. Phlox would feed tribbles to the other animals he kept around (for experiments) in his lab.

Tribbles also make appearances in the reboot series, with one showing up in the Federation Base on the Vulcan Moon (where Kirk meets Scotty) in the first film of the new series, while McCoy uses a tribble for a key experiment in sickbay in Into Darkness. Also in the extended materials for the reboot continuity, an IDW comic mini-series tackles the original "Trouble with Tribbles" material for the new crew in "The Truth About Tribbles".