The Scorpion King 4: Quest for Power

I think we can all agree that this series of films sucks. No one expects anything from a film with "The Scorpion King" in the title, at least not once the first film came out and proved how bad this series was going to be. At this point if a film can be even marginally competent, such as the third movie, Battle for Redemption, it becomes a stand-out film, practically a massive success in a sea of all the shit around it. 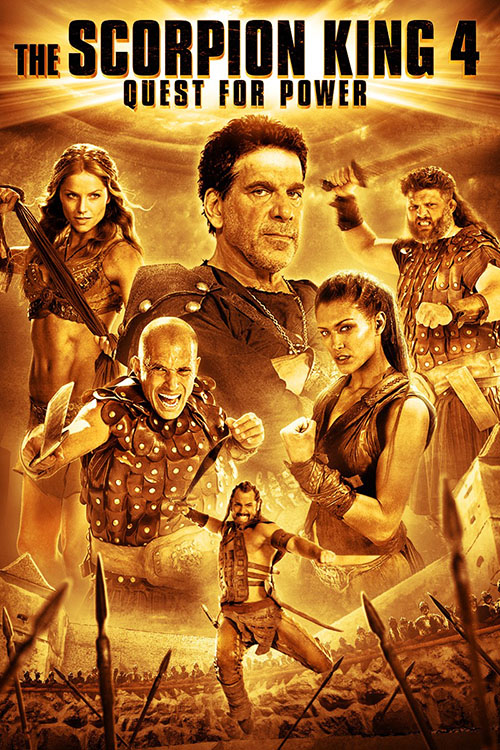 Thus, when I say that the fourth film in the Scorpion King series, Quest for Power, is an utter waste of potential, that should give you some idea of how bad the film really is. It's not just that it's a bad film by normal standards but that it's a bad film even by the low standards of The Scorpion King. This is a wretched piece of trash and, even for a direct-to-DVD film, someone should have come along and questioned what they were doing, putting a stop to it before it even came out.

In the film we join up with Mathayus (a returning Victor Webster, the first time the main character has been played by the same actor... also the last time), as he and his "apprentice", Drazen (Will Kemp), invade the castle of a warlord to raid his treasury and steal a magical urn. If you're wondering why Mathayus is on this random quest when, last we saw, he was ruling a kingdom, don't worry about it; the movie doesn't address it in the slightest, he's just no longer king and doesn't care at all about that backwater kingdom anymore. Regardless, after battling the warlord (played by Lou Ferrigno), Mathayus and Drazen grab the urn, only for Drazen to double-cross Mathayus and leave the Scorpion King stranded (in a cage) while he runs off with the treasure.

Not addressing how Mathayus escapes (we just jump ahead to after), Mathayus is now on a quest for revenge against Drazen, both to get the urn for the king that hired him and also to take out his back-stabbing apprentice. Drazen is actually the son of King Yannick (Michael Biehn), and with the urn in hand son and father break the treasure open to reveal a key. This key will unlock the way to the vault of Alcaman which houses a sacred treasure with in. Sensing an opportunity, Draen kills his father (with scorpions, somehow) and blames it on Mathayus. This sets the chase in motion with Drazen and his armies, chasing Mathayus and his new companions -- the rogue Valina (Ellen Hollman) and her scientist father Sorrell (Barry Bostwick) -- while they try to get the treasure first and prevent Drazen's rise to power.

There are a huge number of issues with this film but the first we have to talk about is the complete waste of talent. Victor Webster already established he could play this part with ease in the previous film; while he didn't play the character even remotely like The Rock, his performance worked within the context of the third film and was generally enjoyable. He was big, charismatic, and let the film roll over him. Here, though, the material is so stupid that even Webster can't get into it. His performance is now just slightly higher than bored disinterest and it drags his scenes down. I don't blame him for that, mind you, as the script is utter crap. It's just that this film wastes a decent actor like this on Z-grade material. 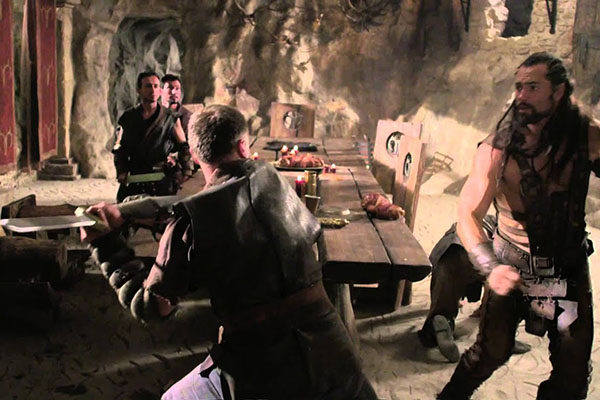 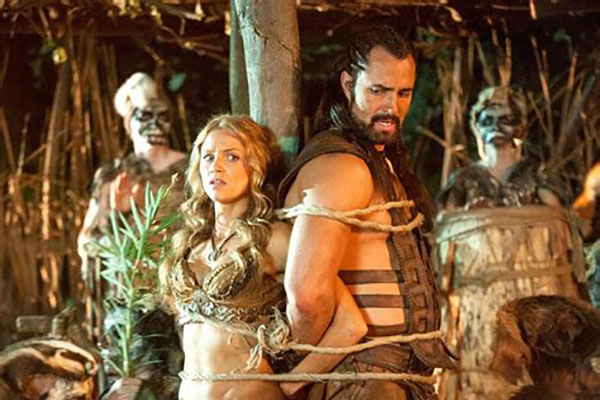 In fairness, Webster does act well opposite Ellen Hollman, and the two leads have an easy, friendly chemistry. In the few moments where they get to just hang around and shoot the shit, their performances work. But most of the time they're forced into stupid situations and to do dumb things, over and over, and neither of them are able to sell it (or in the case of Webster, even trying to sell it) and the film falls on its face. Hollman does give this film her all, but the material just isn't there to save her.

Those are the leads, but there's plenty of other talent that this film completely squanders. While Michael Biehn, Rutger Hauer, Barry Bostwick, and Lou Ferrigno aren't exactly big stars by any stretch, their stars in Hollywood all having long since faded, they are fantastic performers given the right scenes and material. But instead of giving any of these men great parts, the film largely shoves them into a single scene before handing them a paycheck and shoving them out the door. I have to guess the producers wanted to be able to put all their names on the box copy but also wanted to have these "names" without having to spend a lot of money, so it was a lot of one-day shoots to get the actors in the film all for the talking points.

Barry Bostwick is the one I feel the worst about, though. Although he's never been more than a C-list actor, starring in films like Rocky Horror Picture Show (which is a cult phenomenon but not a big blockbuster) or TV shows like Spin City, he is a solid actor. This film turns him into a buffoon, and complete, utter, grating idiot. I hated every second of the film where he was on screen and, more than one, I simply wished his character could get killed off. That blessed ending never comes.

Let's be clear, though: Bostwick's Sorrell is only one small piece of an irritating film. This movie is a shapeless road trip/quest film, and every scene manages to have yet another baffling sequence of idiocy. It bounces around, taking the heroes from one stupefying scene, often trying to shove in humor to perk up its sequences, but none of the jokes ever land. Frequently it has to resort to bathroom humor and gross out jokes, humor that only a five-year-old would laugh at, and I don't think that age group is the target audience for this film (although, frankly, they might be the only ones to enjoy it). This is just a tragic, meandering, shapeless mess of a story. 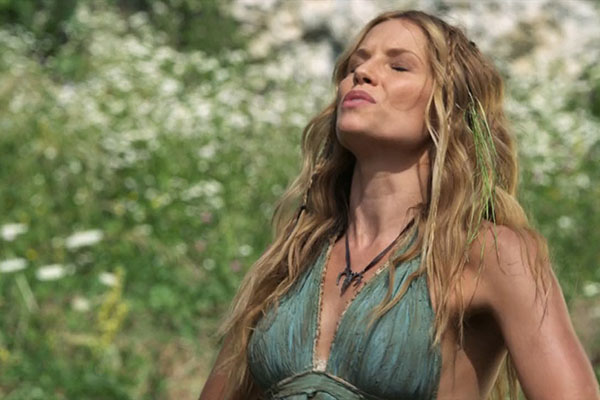 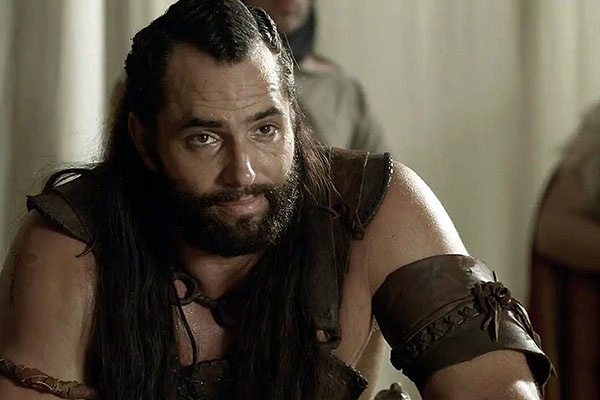 And then you get the moments where the film pillages from other, better films as the producers clearly ran out of ideas. The whole last act, for example, feels like it was stolen from Indiana Jones and the Last Crusade while the first act has a sequence clearly inspired by the "crushers" hall in Galaxy Quest. Needless to say, the comparisons do this film absolutely no favors; it has neither the talent, nor the budget, to make sequences like this stick and it's just painful to watch it try.

All around this film is just terrible. It's cheap looking, even by the standards of the previous films (I seriously think they found some random winery that would let them film on location and just set dressed everything there), it's poorly written, its poorly acted, and is all around painful to watch. I very rarely actively want to turn a film off within the first few minutes, but this movie made me strongly consider it. The Scorpion King 4: Quest for Power is a test of patience, an utterly bafflingly bad film that never should have been released. Even by the standards of low-grade direct-to-video features, this is utter garbage.

Thankfully, as with the previous films, it hardly ties into the series lore at all. If you desperately want to know the story of Mathayus and how he because the giant Scorpion monster seen in The Mummy Returns, you can do yourself a favor and skip this title completely. There's nothing to see here and no reason to torture yourself at all.