I think I need to admit that the brand of comedy Abbott and Costello peddled back in the day just isn't for me. I've watched two of these films so far (both them meeting the Invisible ManOriginally created by H.G. Wells, The Invisible Man is probably best known from the series of Universal Monsters featuring various versions of the titular character. as well as the rest of the Universal MonstersThis franchise, started off with Dracula and Frankenstein in 1931, was a powerhouse of horror cinema for close to two decades, with many of the creatures continuing on in one-off movies years later. over in Abbott and Costello Meet Frankenstein) and I just wasn't entertained. Oh, this film was engaging enough in comparison to other late-era Universal Monsters films, but on the whole I just didn't care much about this film or its silliness. 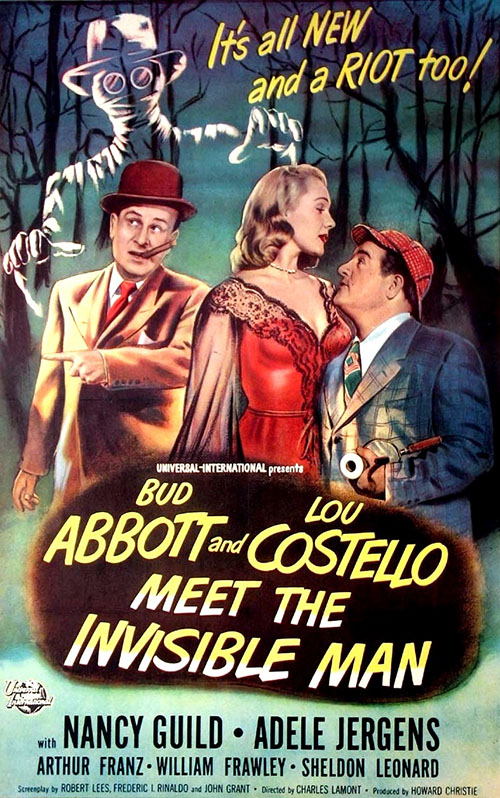 I think, in part, my issue is that this film is nearly a decent Invisible Man flick all on its own if not for the inclusion of Bud Abbott and Lou Costello. Like, there's an engaging story in here about betrayal, redemption, and using the the invisibility formula to get justice (a similar story told over in The Invisible Man Returns) if not for all the mugging comedy from the central duo. And it's not as if these films can't be comedies (as The Invisible Woman proved ably enough). There's just something off, something not right about this film, and it's the comedic duo at the center that cause all the problems.

In Abbott and Costello Meet the Invisible Man, we're introduced to Bud Alexander (Bud Abbott) and Lou Francis (Lou Costello), two freshly graduated detectives hired by boxer Tommy Nelson (Arthur Franz) to investigate the murder of Tommy's manager, a crime Tommy is blamed for. Forced on the run, Tommy makes a devil's bargain and agrees to be a guinea pig for the invisibility serum created by Dr. Philip Gray (Gavin Muir). The serum does work, turning Tommy invisible, but it also slowly starts to twist his mind, making him mad with power.

The focus, though, isn't specifically on Tommy, as compelling as his story would be. Instead we turn to our leads, Bud and Lou, as they work the case, getting into "hijinxs" as they mug for the camera and crack regular bon mots (very few of which actually land). The whole case hinges on the Mafia wanting to rig boxing matches and, when Tommy fails to take a dive, the Mafia comes after him and frames him. So Lou has to go undercover as a boxer, pretending to fight (while the invisible Tommy does all the work) all so he can lure out the Mafia and get them on the crimes of bribery and murder. An intriguing plot were it not for the execution.

I will acknowledge that I just didn't dig the previous effort from these two comedians that I saw (the aforementioned meeting they had with Frankenstein) and that may, in part, be because their brand of humor doesn't work for me, or hasn't aged well into the modern era. Something about it is off, too cartoony for the plotting around them, too silly to feel like it's within the scene of the movie. It's not the mugging, or the fourth wall breaking, or any of that taken on its own -- I certainly loved all that in Deadpool -- but the blend of it on the plot being told just didn't make me laugh. 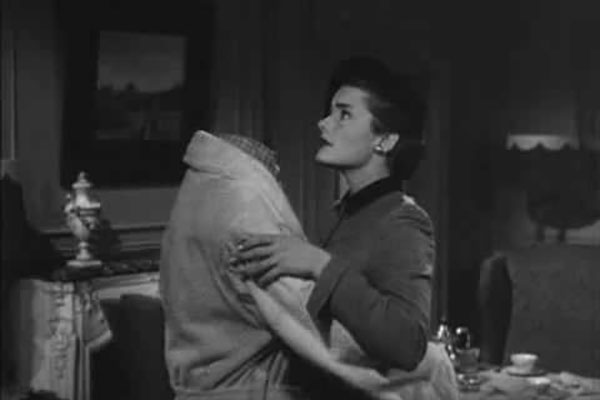 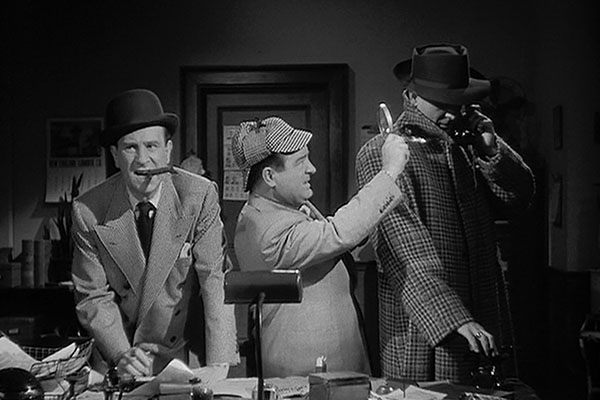 It could, in part, be due to the comedians themselves. Sometimes actors work for me, sometimes they don't, and I will fully admit that I have yet to be won over by Lou Costello. I just don't like the actor or his performance style, and since he's the comedian bumping up against Bud's straight man, their two-man shtick just doesn't thrill me. I like Bud just fine, for the job that he does, but his buddy irritates me, rarely getting a laugh out of me at all.

It's a pity, too, because I really enjoyed the movie going on around them. The Invisible Man once again cast as a tragic hero, out to clear his name and use his powers to right some wrongs, is an angle I liked (it certainly worked in The Invisible Man Returns), and the sports angle was a nice twist, a different direction taken from the previous films in the Invisible Man series. If the film could have played it a little straighter, going through the same setup and story without the two comedians at the lead, I could have really enjoyed this film through and through.

Certainly all the actors outside of Lou and Bud are pretty solid. Arthur Franz does a good job as the boxer Tommy, especially in conveying his tragic emotions as just a floating voice on screen. His lady love, Nancy Guild as Helen Gray, is also strong, as she too conveys her love and loss in their tragic pairing. Heck, all around the actors turning in serious turns on the Invisible Man's side of the story are great and I really wish we had more time to spend with all of them.

And the special effects of the film are great too. This is easily the best looking of the classic Invisible Man films, with special effects that hold up even now. There's very little of the bad compositing or visible edges to the Invisible Man's setup, nothing to draw you out of the picture and make you start noticing the man behind the Invisible Man. Hell, they even have him eat and drink this time and it looks seamless. Considering the era, that's jaw-dropping in its production values. 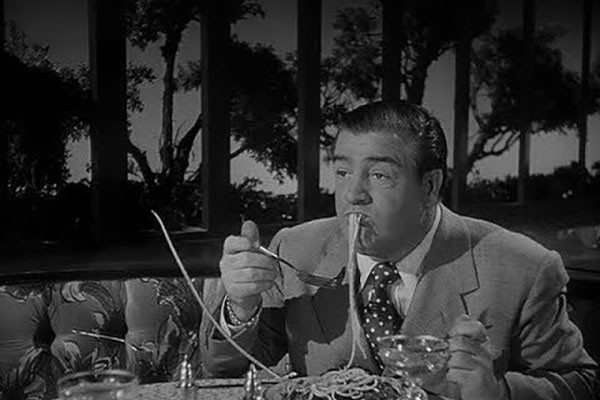 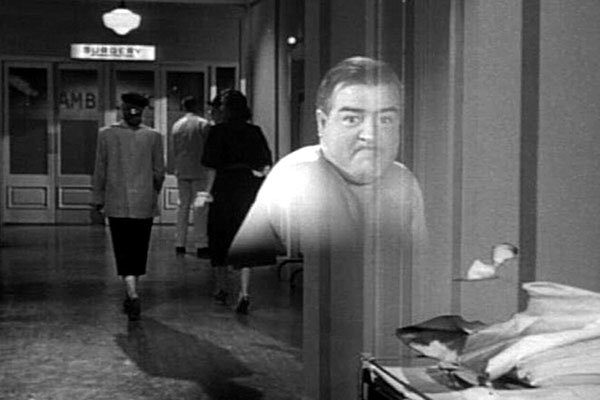 And yet, this isn't just an Invisible Man film but one starring Abbott and Costello, and unfortunately we're back to where the film falls apart. Every time I started to get invested in the crime story, the drama, the actually compelling moments, Lou would wander on screen and be zany, or the camera would cut to a reaction shot of an actor seeing the invisible man and have them go to a clinic for a "humorous" moment talking to a psychiatrist. Over and over the film would rely on the same running gags, beating them down, instead of giving us the good movie that was waiting there, right at its core.

Abbott and Costello Meet the Invisible Man is a frustrating movie. It could be a solid drama in the Invisible Man canon, but instead it's a bad comedy that doesn't ever know what direction it wants to go. Even though it's better than Abbott and Costello Meet Frankenstein, the first of these awkward monster/comedy match-ups, that doesn't make it a good film by any stretch. Better than bad is still pretty awful.