The Scorpion King 3: Battle for Redemption

I know most people don't go out of their way to watch every bad movie in a series (especially if they aren't watching something fun like Mystery Science Theater 3000First aired on the independent TV network KTMA, Mystery Science Theater 3000 grew in popularity when it moved to Comedy Central. Spoofing bad movies, the gang on the show watch the flicks and make jokes about them, entertaining its audience with the same kind of shtick many movies watchers provided on their own (just usually not as funny as the MST3K guys could provide). It became an indelible part of the entertainment landscape from there, and lives on today on Netflix.). Bad movies are bad and once a series falls far enough off a cliff, audiences tune out. There's only a small portion of the populace that will go out and watch terrible films, and a small subset still that will come back, time and again, to watch everything in a series' run. That's probably why barely anyone talks about all the Scorpion King films and how, by the mid-point, there's actually a halfway decent film in the bunch. 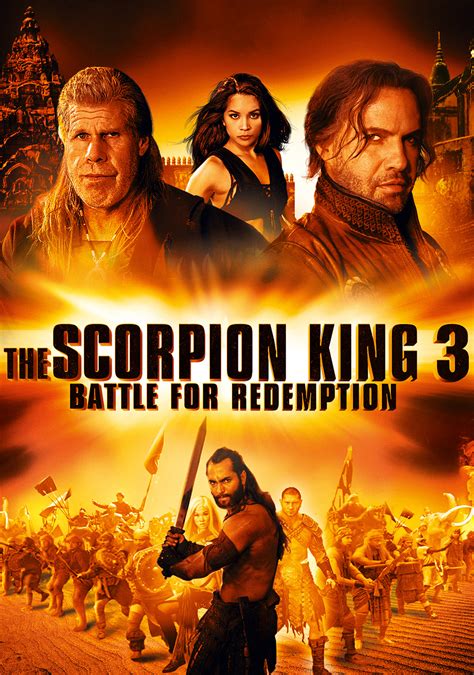 I say that with the caveat that I'm probably lost in the weeds at this point and grasping at a terrible film that has any semblance of decent acting and production values. I still wouldn't rather this, the third film in the series, Battle for Redemption, as "truly good", but by comparison to what's come before (even in relation to the first The Scorpion King film), this third movie is actually pretty okay. It's fun, it's funny, and it provides just enough entertainment to while away a couple of hours. It's never going to make a "Best Of" list (unless it's "Best Films in the Scorpion King series), but where I expected this film to be complete ass I came out relatively surprised.

This film picks up after the events of the first main-line film. Since taking over Memnon's throne, Mathayus (now played by Victor Webster for this and the next film) managed to run his kingdom into the ground. His people were lost to a deadly plague, his wife died, and the Akkadian was left alone and dejected, wandering from place to place as a mercenary (we learn all this in a voice over before the film really begins). His travels take him to Egypt where he's hired by King Horus (Ron Perlman) to go to the Far East and aid the city protecting to the Book of the Dead. If Horus's greedy brother, Talus (Billy Zane), gets the book he'll use the powers within to conquer the world.

Note, Mathayus doesn't care about the world-ending implications. He, and his new companion Olaf (Bostin Christopher) are motivated only by money. The Far Eastern king, Ramusan (Temuera Morrison), will pay handsomely for their services (or so they're told), but then when they get there and help save the city they find that Ramusan's kingdom is fresh out of gold. He does have a daughter though, Princess Silda (Krystal Vee), although she was kidnapped by Talus so Mathayus would have to get her back if he wanted to marry her. Marrying her isn't really on his mind, but she has a mystical pendant that could fetch a pretty penny, so Mathayus and Olaf agree. This this puts them towards Talus, who hires them for a different task and, well, but the end of the film we're not even sure who Mathayus is really serving anymore but he's certainly having fun doing it.

The primary reason why this film works as well as it does is because it understands just what kind of movie it's going to be. The first film still had illusions that it could be a grand franchise starter (and while it did start a franchise it's anything but grand). It had a big budget that it then wasted on a glorified Hercules: the Legendary Journeys episode. The second film, Rise of a Warrior, thought that it could be the first film, but on a smaller budget with a terrible cast, and that assumption did the film no favors. Two for two this series over-estimated what it could pull off. 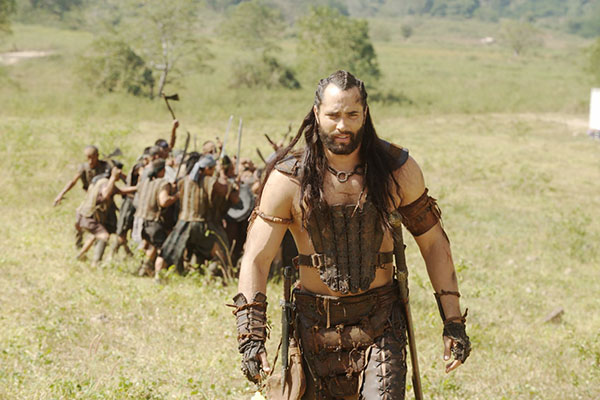 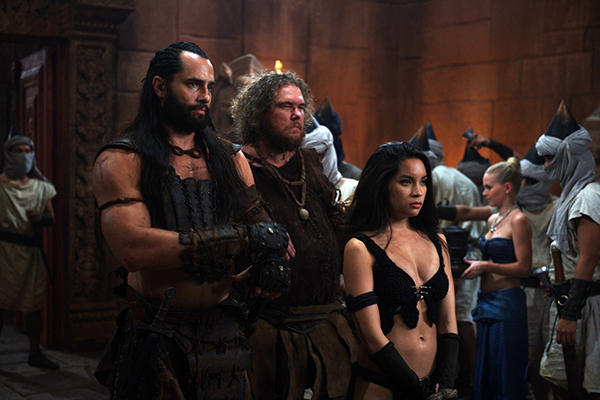 By comparison, Battle for Redemption leans in to the kind of movie it is: a glorified Hercules episode set in a different franchise. Mathayus and Olaf have the same kind of chemistry as Herc and Iolas from the show, just, arguably, with more charismatic actors in the two roles. It's a low-budget schlock-fest, but no one in the film (especially not the leads) acts like its anything else. Webster and Christopher play every scene with a certain air of, "this is dumb but I may as well go with it," and in the context of this low-budget cheese, it really works.

It's actually surprising how many decent actors they have in this film. Perlman, of course, is a dedicated B-movie actor who can sell just about anything he's in, even this terrible script. Morrison, too, has already proven he could sell bad material, just like he does here (if you need a reference, he was the only good actor in Star Wars, Episode II: Attack of the Clones and I'm glad they brought him back for The Mandalorian). Billy Zane used to be in the Hollywood A-list, but his star has fallen far since that time; even still, he has a lot of fun chewing the scenery as the villain here. His performance is dumb, in a "I don't care kind of way," but I liked it for what it is in the context of this movie.

That's not to say that everything in the film works. The first half of the story is certainly better than the back half, as that's focused on the simple fetch-quest Mathayus and Olaf are given. Once we get into the back half, though, the layers of crosses and double-crossed get laid on and the film keeps twisting itself simply for the sake of it without actual logic getting applied. Then ninjas show up, for some reason (this despite the fact that this film takes place a good thousand year BCE while ninjas didn't exist until the 15th Century CE) and the movie goes right off the rails as far as story and tone is concerned. The actors do what they can with the material, but it's hard to care with everything and the kitchen sink being thrown at the story just to see what sticks.

This is actually a bit of a pity because one cool idea, that connects this film all the way back to The Mummy Returns, is implemented: summoning dead warriors from the pages of the book. Three mystical warriors are brought back from the dead (including Dave Bautista who already here showed he could sell whatever material he was given), and if these three could have been the focal point of the back half of the movie (instead of ninjas and whatever they were doing) I probably would have enjoyed it more. There's just so much going on in the last act of the film that this cool idea doesn't have time to land with any real consequence. 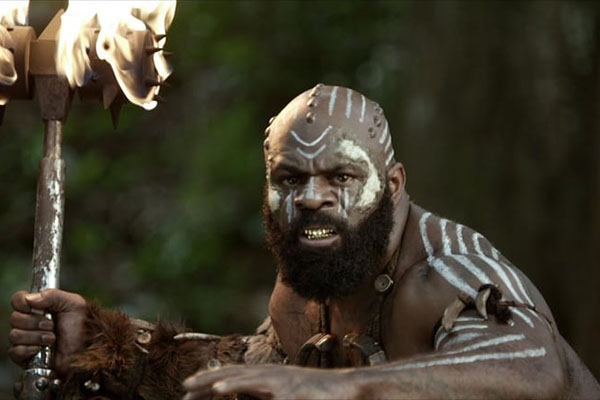 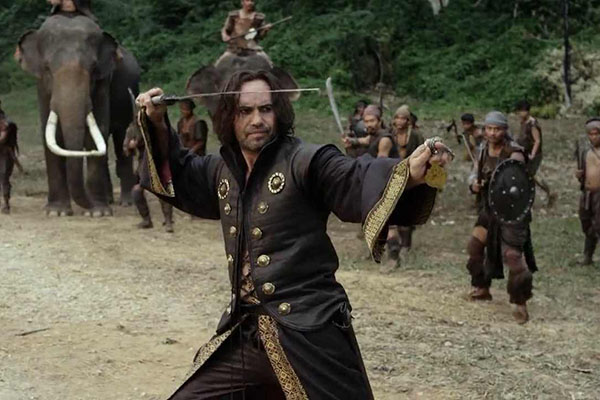 For the most part The Scorpion King 3: Battle for Redemption does a good job of telling a modest story within its means and giving us a fairly entertaining experience. It has too many ambitions in its story eventually, but even when it doesn't work as a story it still has charismatic actors having fun, which gets us through the rougher patches. It doesn't take much to be the best Scorpion King film yet, which really is a low bar for this sad little series, but this film manages to be just that cooling salve we needed after two terrible films. It's bad, but a fun bad that's better than parts one or two of the series.

No, it still doesn't answer any questions I had about the series, and it certainly doesn't give us much of a connection, beyond the fabled book, to go on for how this series will connect to the version of the character we saw in The Mummy Returns (on off-hand end-credit sequence notwithstanding). These films are all so disconnected from each other at this point that you just have to try and ignore all continuity essentially. But if you can shut off your brain and just settle in for a dumb couple of hours, Battle for Redemption more or less delivers.