We noted in the review of the 2014 Hercules that the Brett Ratner film seemed to draw heavily from two influences: the Kevin Sorbo-starring Hercules: The Legendary Journeys and Universal's The Scorpion King. Both of those works were swords-and-sandals epics that were horribly cheesy but delightfully so. If anything, 2014's Hercules felt like a much-improved second draft of the early, Rock-starring film. 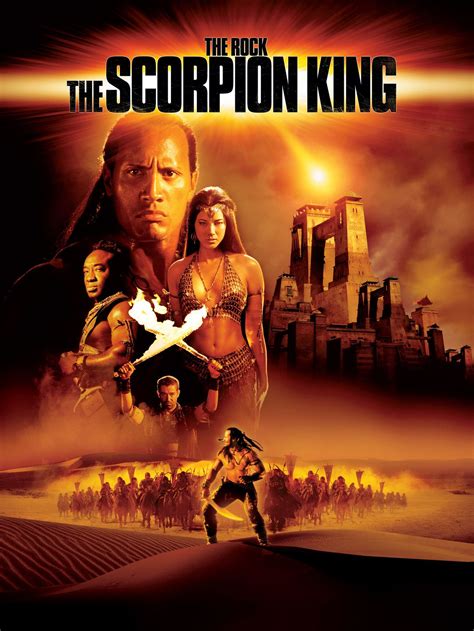 It's time, though, to go back and look at that early film. A spin-off of the Universal Mummy series (specifically The Mummy Returns, the film was meant to kick-start a new franchise for the studio and give Dwayne "The Rock" Johnson a series of films to star in. While the former certainly did happen -- there are now five Scorpion King films, although all but this first one were released direct-to-video -- The Rock left after the first film, presumably due not only to the film's mediocre returns ($180 Mil on a $60 Mil budget) as well as The Rock's increasing star power (and increasing price).

Frankly, setting up the Scorpion King (or, as he's known in this film, Mathayus the Akkadian) as a hero of his own story is an odd fit for the character and the series. When last we saw him, he was the weird monster-villain of the second Mummy film, more of an evil McGuffin than something you'd think would headline his own series. Plus, the special effects used to generate the Scorpion King were atrocious, even at the time. Why would the studio want to make a film starring this guy, especially considering the kind of horrible CGI mass we know he would become?

Well, there's no denying The Rock's charisma, and when you have the guy signed up to make a couple of films you make those films in hope that you'll get your money back (and then some). The Rock was a big star back then (and his star has only risen) so the prospects of a film based on this character, whatever narrative loops were required to make him the star of the show, had to seem like a win for the studio. It might not have made for the best film (and it didn't, with hindsight) but certainly the studio had to assume between the massive success of the Mummy films at the time, plus people wanting to watch The Rock, they could have something of a winner here.

The film is certainly... something. If you felt either of the two Mummy films were cheesy you aint seen nothing yet. This film seems like it saw what the other swords-and-sandals epic of the time, Hercules: The Legendary Journey was doing and said, "hold my beer!". It's about as far from the tragic tale of a warrior-turned-king selling his soul to save his people, and in the process becoming a scorpion monster, as you'd expect. It is, however, a stupid bit of fun. It's not a good film -- it certainly rates as "craptastic" in my opinion -- but it does know how to let its hair down and at least provide and enjoyable time. 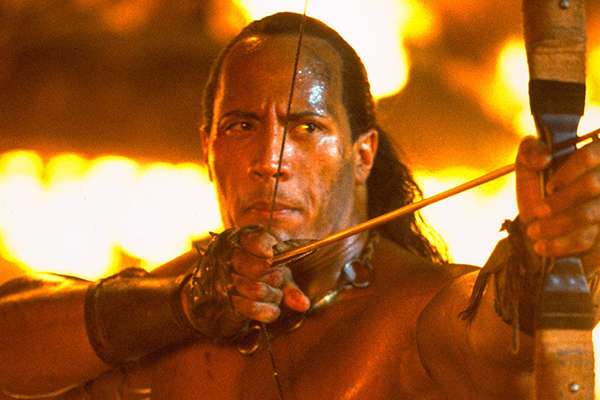 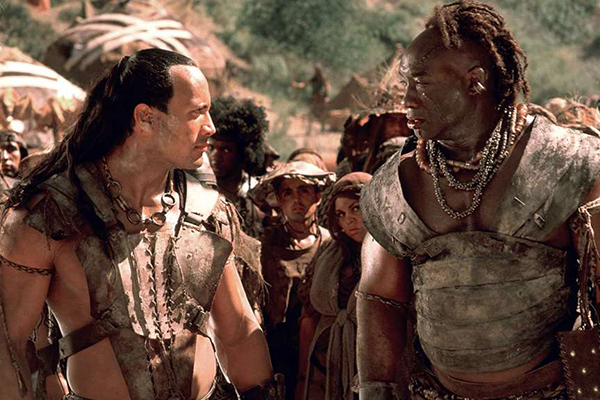 In the film we're introduced to Mathayus (in all his Rock-itude), one of three surviving Akkadian warriors, along with his brother Jesup (Branscombe Richmond) and some rando we never see again, who are hired by King Pheron of the free tribes to take on the evil King Memnon (Steven Brand). Memnon has been taking over the whole of the known world, powered by the visions of his sorceress, Cassandra (Kelly Hu). The Akkadians are meant to kill Cassandra and cut the power out from under Memnon.

Unfortunately for our would-be assassins, their plot is foiled when Pheron's son, Takmet (Peter Facinelli), kills his father and the informs Memnon of the scheme. The Akkadians are captured and all by Mathayus are killed. Due to a warning from Cassandra, though, Mathayus is left alive, put out in the dessert where he'll presumably die of exposure. Out in the wastes, Mathayus meets up with Arpid (Grant Heslov), a horse thief who's also a bit of a weasel, but the two join up so that Mathayus can get into Memnon's capitol and find the sorceress. They end up kidnapping Cassandra, and that's when Mathayus learns she's been a prisoner her whole life and has had no choice but to help Memnon. That's when their quest changes: to free Cassandra, defeat Memnon themselves, and save all of the known world from his evil machinations.

As I noted, this film isn't good and a lot of that has to do with the vagueness of the storytelling. While parts of this story might be based on mythology (although that's unlikely), most of this film is world-building whole cloth but it does it in the most half-assed way. It introduces us to people and concepts -- Memnon, the free tribes, Akkadia -- without really explaining any of it or making the world feel lived in. We get a bunch of cheap sets, a few characters spouting exposition, and then the film rushes off to the next action bit. It's not really concerned with giving us a plot so much as just putting The Rock through a series of action beats.

That said, putting The Rock through action beats is the part of this film that works really well. Although he was a wrestler by trade at the time, and as such was much better fighting with his fists and body, he acquits himself well even when forced to work with weapons (although the times the film lets him use his wrestling skills, the action is even better). Between his natural charisma, and his massive body that could do whatever the action director wanted of him, The Rock is essentially his own special effect, carrying the film though all its weird places and strange beats. 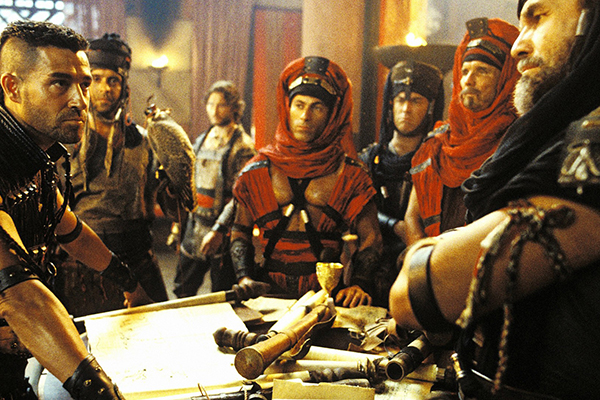 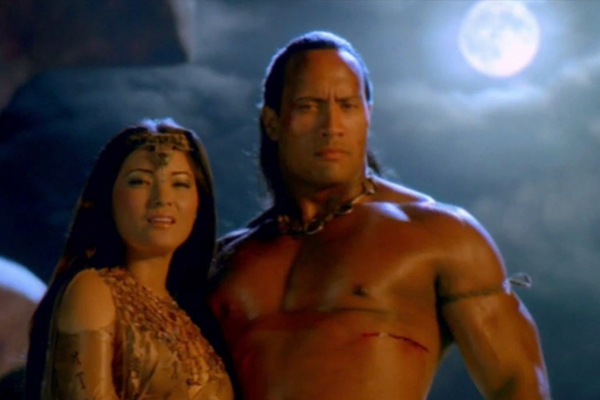 Mathayus is, or course, also the best and most fleshed out character in the film. We get to know enough about Arpid and Cassandra to make them feel like fleshed out characters -- unlike, say, the villain, Memnon, who is a barely-sketched slime-ball -- Mathayus is the star of the show, in every scene and commanding all the attention. He's our hero, and he's great, but that's all due to The Rock. Were it not for our lead actor, even Mathayus would be a bit of a wash (which, as we'll see in the sequels, it a fact we can back up with evidence).

And, yes, the film is an absolute cheese fest. From the first frame of the film all the way to the last, this is a shoddy, cheap looking film with not sense of tone or style. It takes all the artistic construction of Hercules: The Legendary Journeys and slaps it on the big screen. I get that the TV series was big back in the day, but it seems off to essentially make a Mummy-adjacent version a few years later. Conceptually it's just hard to understand what the producers were thinking when they made this film. Who was it for? Did they actually expect this would be a hit?

The biggest issue, though, is that fact that this film is pitched as a prequel but we never see (at least, not in this film) the events that led our hero to become the monstrous Scorpion King. That seemed like the promise of a tale like this but the movie never even addresses it. It's so far removed from the character we saw back in The Mummy Returns as to make it basically an unrelated film altogether. Hell, if they'd had a different actor in the lead role (foreshadowing) it certainly would have felt entirely removed from anything we'd seen before.

All that being said, I did find myself enjoying this film for what it was. I knew the kind of movie I was watching, having seen it once before, so this film didn't have any surprises (good or bad) for me. It's just a cheesy, schlocky film made to entertain for a couple of hours and then vanish from memories just as quickly. It's dumb, and fun, but hardly memorable and, long run, The Rock would go on to crank out much better films in the action genre. Unless you're absolutely committed to watching everything related to the Universal MonstersThis franchise, started off with Dracula and Frankenstein in 1931, was a powerhouse of horror cinema for close to two decades, with many of the creatures continuing on in one-off movies years later. there's really no reason to watch this film. That said, if you're like me and you do have to watch all the Universal Monsters films, you could do a lot worse than The Scorpion King.