I don't want to say that the Universal MonstersThis franchise, started off with Dracula and Frankenstein in 1931, was a powerhouse of horror cinema for close to two decades, with many of the creatures continuing on in one-off movies years later. Invisible Man series was running on fumes. The whole series had wisely changing things up more than once, going from horror films to mystery, comedy, and then war thriller. Just about any strange idea that could be used to make another film in the series had been pursued and, if nothing else, it had given each movie a fresh edge, something new for audiences to experience. You never knew what you were going to get with the Invisible Man.

But then came The Invisible Man's Revenge which played out like a basic rehash of the first film, just with some other scientist creating the formula for our new titular monster. Whatever other special trappings this film tries to add -- a creepy, unrequited love story on top of a guy done wrong by his friends -- it's still just another Invisible Man monster movie, and we've seen this story before.

In The Invisible Man's Revenge we meet Robert Griffin (Jon Hall, who also was in Invisible Agent playing a different Invisible Man; this one is unrelated to any previous Griffin incarnations). Griffin has just snuck into London, having secreted himself into a shipping container that was then dropped off on the docks. Griffin is a wanted man having snuck out of a mental asylum after killing three people at the hospital. On the run, he goes to the one place he figures he can gain aid, the home of his old friends Sir Jasper Herrick (Lester Matthews) and Lady Irene Herrick (Gale Sondergaard). These two used to be in business with Griffin, having gone on a expedition to find a huge diamond mine. Griffin was lost on the expedition, presumed dead, and his friends claimed all the money earned from the mine for themselves. Now that he's back he wants his share.

Only problem is that the Herricks don't have that kind of cash, at least not to pay back a full 50% stake in the company. Although they offer half of whatever they have left, Griffin demands more, all their cash, their house, their title. All of it. They, naturally refuse, so Griffin produces their original contract showing what he's owed and threatens to sue. So they knock him unconscious, steal the contract, and kick Griffin to the curb, calling the police on him as well. That would likely have been the end of it were it not for Dr. Peter Drury (John Carradine), a scientist who has invented a serum to turn any living creature invisible. Stumbling onto Drury's doorstep, Griffin quickly agrees to be a guinea pig for the invisibility experiment and then, once invisible, he uses this new power to stalk the people that did him wrong so he can terrorize them into making it right (even resorting to violence and murder to get the job done). 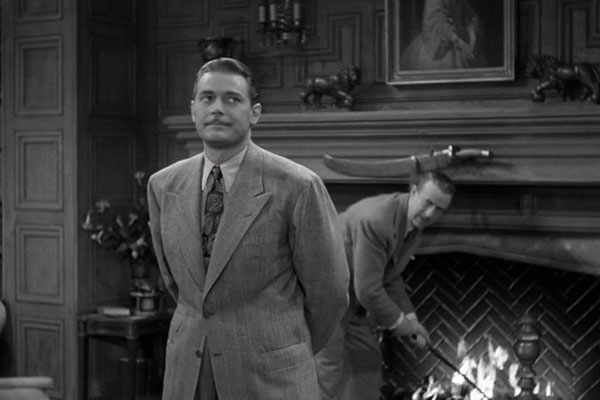 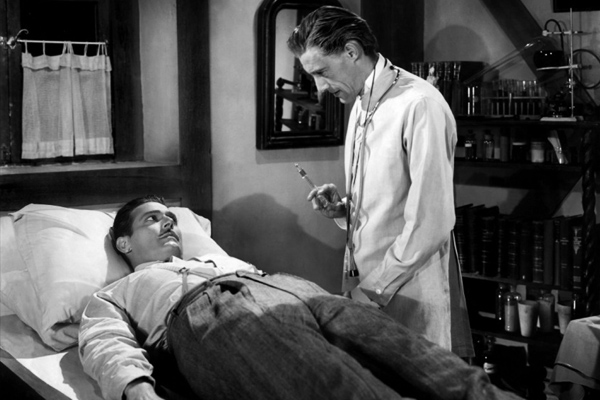 The lack of creativity isn't the only problem with the film, though. There's also the fact that it has wild swings in tone that ruin the overall experience. Griffin is a classic madman, with a performance from Hall that's equal parts wild eyed and scenery chewing. However, his best mate, Herbert Higgins (Leon Errol), is a plucky comic relief character that would have been more at home in the comedy of errors The Invisible Woman. Here, Higgins feels like he was transplanted in from a different movie, ruining the horror vibes this film tries for (and fails to achieve).

Plus, frankly, the film really doesn't know who the hero of the movie should be. Is it Griffin, the clearly insane, homicidal maniac with a legitimate claim to money that he's been denied by a couple of greedy fair-weather friends? Or is it the Herricks, the two nobles that took the whole of the diamond mine because they thought their partner was dead and, after learning the truth offer to share some of what's left before stealing the contract and pretending they don't know Griffin at all? No one here is really a good guy and that would be fine if the movie actually treated them all equally. But while Griffin meets the fate of all Universal Monsters (e.g. death), the Herricks suffer no long-term consequences for their actions. They weren't the "monster" so they're let off scot free. That doesn't really work for me.

There is also the fact that the invisibility serum seems inconsistent in its application. At one point we see a dog that the scientist has made invisible. Later we see it once again opaque, having been turned visible again via a blood transfusion. The only problem is that it takes a transfusion of all the blood in a body to the invisible person to make their opaque again, and that naturally kills the donator. It's also not permanent as, after only a day, Griffin starts to go invisible again. The dog, though, never suffers this same consequences, as once its visible is stays visible. Shouldn't the rules apply the same way? Shouldn't the dog become invisible before Griffin does? But the dog is the proof that reveals Griffin and causes his downfall (chasing him about and leading the cops to the Invisible Man) so if the rules were applied consistently the ending of the film wouldn't work.

But then, the big issue is that the whole blood transfusion idea is ghastly only if you use up all the blood from the host at once. Nothing in the rules state the blood has the be fresh, though, so why not just find a willing donator or two and get a few smaller transfusions from them, keeping the blood on ice until needed. That's less ghastly, positively sane and totally obvious. The movie never mentions this, though, because if Griffin does something like this then he's not a monster and we can't get our morally just ending (as mandated by the norms of the era). 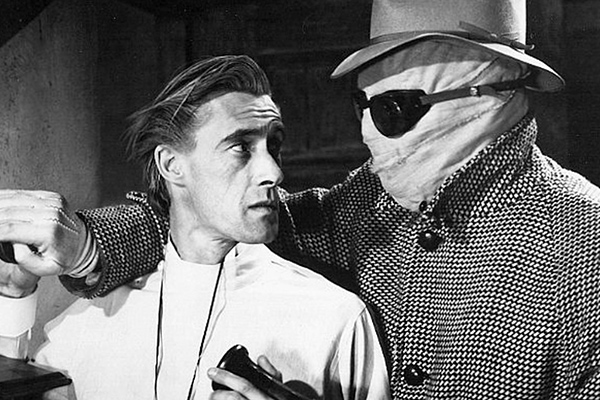 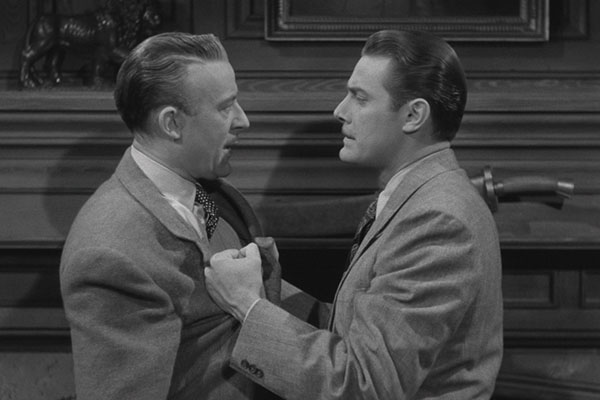 This film ties itself into knots to make Griffin the bad guy over and over again, which is stupid because it sets him up as a homicidal maniac from day one. If he could have just remained a ravening mad man the film probably would have been stronger for it. At the very least it wouldn't have caused all these questions about the intelligence of all the characters involved, nor the fuzzy morality of every single character in the film. Someone could have been the good guy so that the black-and-white ethics of the end of the film would have actually felt (as Timothy Olyphant would say) justified.

The Invisible Man's Revenge is a mess. It's nice to have a horror-themed Invisible Man again, I just would have liked it to be better than this. Eventually we would get another try at the Invisible Man as Universal Monster, it just would take another 75 years (and a couple of comedic films in between) to make it happen.