Over the years I've written a lot about the Universal Monsters for my Castlevania site, The Inverted Dungeon, but in all that time I've never bothered watching or talking about The Invisible Man. The reason was that while Dracula, Frankie, the Mummy, and the Wolf-Man all show up as bosses and major characters in the series (repeatedly, no less), the Invisible Man does not. Sure, eventually in later games ghost-type characters that are largely invisible do show up in the series, but that's really not the same -- it's like calling all vampires "Draculas", which is irritatingly inaccurate. Since the character didn't show up in the series, I felt I had a pass. 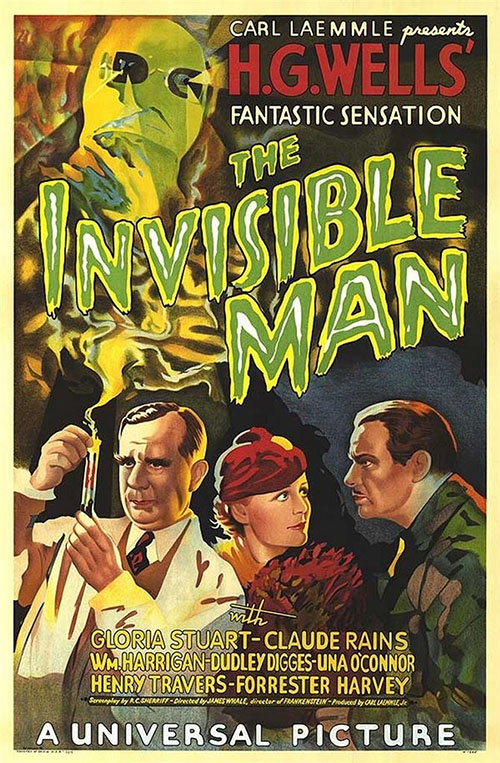 Of course, then came along Universal's ill-fated "Dark Universe", their attempt to capture some of that Marvel Cinematic UniverseWhen it first began in 2008 with a little film called Iron Man no one suspected the empire that would follow. Superhero movies in the past, especially those not featuring either Batman or Superman, were usually terrible. And yet, Iron Man would lead to a long series of successful films, launching the most successful cinema brand in history: the Marvel Cinematic Universe. magic with a bunch of monsters who had their heyday back in the 1930s and 1940s. As a fan of the monsters I was stoked to have them come back to life on the big screen, although even I'd admit that the previous attempts to do so (the beautifully shot but otherwise tedious The Wolf Man, the completely lackluster Dracula Untold) were less-that-stellar. The fear was that Universal was rushing into things, that their hopes for a shared-universe of these critters would come crashing down quickly... Which it did, right after the release of their first, failed film in the "Dark Universe": The Mummy.

I feel for Universal as they had all these plans for their monsters but, so far, had failed to make anything happen with them. Of course, they keep trying, and out of the ruins of the "Dark Universe" is coming, later this year, a different, unrelated reboot of The Invisible Man, and since I now have this site I really don't think I have an excuse to avoid the original series of films anymore. So last night I popped on the 1932 The Invisible Man and readied myself for... something.

Before we get into the plot, let's admit up front that Universal had a formula for their monster films. This held true for all their monster movies of the era, but it boils down to a three step process: introduce the villain, bring in a skirt for the villain to pursue, and then have the villain die surrounded by a mob of villagers because the villain (no matter how much they could be redeemed) cannot survive the end of the film. This is the course of every one of their classic monster films, and no matter how interesting the "monster" at the center of the film might have been, how much it feels like they should be allowed to live, they can't because there's no saving a monster, apparently.

This is probably an outgrowth of the film codes of the era. There was probably someone at Universal that said, "if we let a monster live, even once, we'll have our own angry mob on our hands and our films will get yanked from theaters." And when we're talking about vampires and lab-grown abominations it doesn't seem like that big an issue -- some of the monsters in the series really are irredeemable so watching them die at the end of the film is a kind of catharsis. But then you end up with characters that are mostly human and should be redeemed by the end of the film (especially when they are the focus of the movie, the protagonist), like the Wolf-Man or, here, the Invisible Man, and you start to think. Maybe not every "monster" should die at the end of their movies. 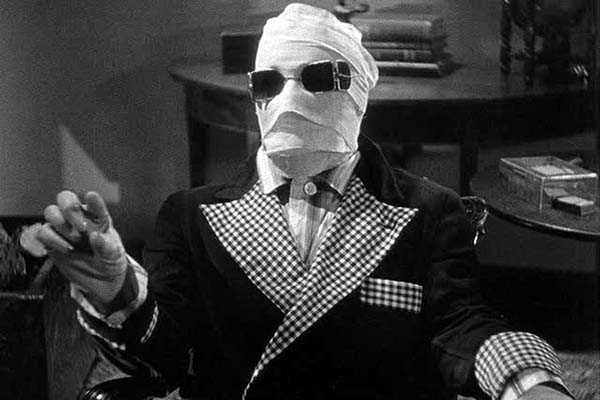 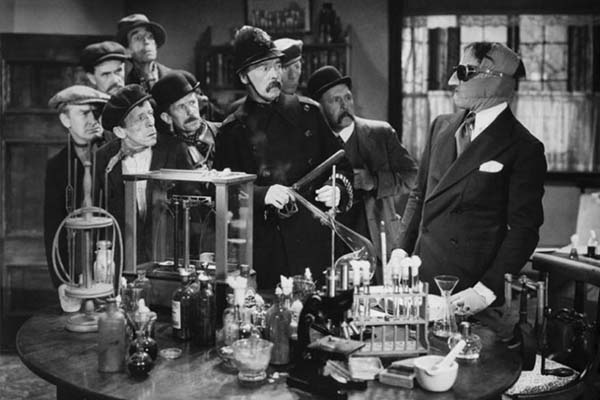 That's the big issue I have with this 1932 film (and, I suppose I should note "spoilers" for a 90-year-old movie that's closely based on an even older book) because the human character, driven mad by what he's done, could still be redeemed in the movie. Instead, though, the film takes the easy way out and kills him because to do anything else would, I don't know, offend sensibilities? Yes, I will admit that our lead character, Dr. Jack Griffin (voice with scenery-chewing perfection by Claude Rains), is a murderous mad man. The film does little to dissuade you from that fact early on, writing him as a raving monster from the moment we meet him. He's already invisible, already ranting about causing a reign of terror across the world, already deep into the throes of his psychosis.

Maybe it's my modern sensibilities having trouble with a film written in a very different era, but now when we have someone that's clearly mentally unstable and can't be held accountable for their actions due to their mental trauma, we commit them not kill them. It would be considered "a tad gauche" if a police officer were to gun down a naked, raving loon on the street, no matter how many people he'd killed. Maybe the courts would find the guy guilty of everything he did, maybe they'd send him to the chair, but that's a decision for the courts. It's hard to make the case that the "monster" was armed (remember, this is a naked, invisible man) so while he might have had a bit of an edge, what with his transparent nature, he could still have been subdued, captured, and tried.

It's implied in the movie that he was a perfectly stable person until he made the cocktail that made him invisible, that it was the compound that drove him mad. He has a woman that loves him, someone that would care for him no matter what he was like or where he was. If his invisibility could be cured it's entirely possible the madness would wear off as well, and his lady love would be there to help him through it. At that point maybe the courts put him in prison for a time, maybe they just bar him from doing science ever again and give him house arrest. Gunning him down in the street like any other monster, though, is just unseemly, especially with the ground work the film sets up to say, "hey, this might not be his fault!" Even the movie can't decide if he's really a monster or not.

I guess that helps to make this film a tragedy instead of just a horror film, although I think that's being kind in the reading of it. If I'd only seen The Invisible Man and nothing else from the Universal Monsters collection, I'd be able to agree with it. But with all those films under my belt, all the time spent seeing the same kind of story told over and over again, I think it's fair to say that Universal was simply following their formula and any "tragedy" in the film is purely coincidental. The monster has to die at the end of his movie, case closed. 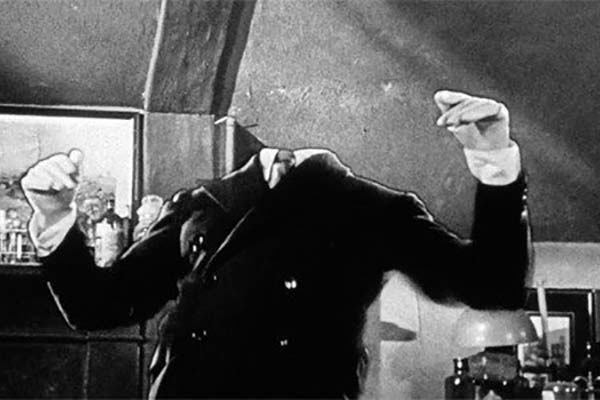 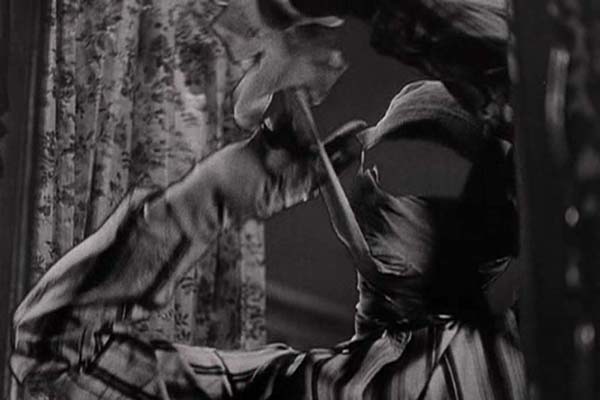 My own qualms with the story notwithstanding, there is a fair bit to like about The Invisible Man. Most obviously, the special effects employed to make the title character are impressive. The big draw were the times the character was show half-dressed so that portions of him appeared completely invisible. This effect was done via the lead actor, Claude Rained, being filmed in an all-black suit (under the clothes that would appear on screen) being filmed against a black backdrop so that, when composited against the scene of the actual location, the black would disappear and the man would appear invisible. It's an impressive effect for the era and, at times, is quite convincing. Of course, it doesn't always work as the matting is sometimes visible (as a black blur) and the compositing sometimes ate away at the edges of the clothing he wore. Still, for the era, this was a show-stopper.

And even if I had issues with the way the story plays out, I do think Rains is able to carry the movie. His performance is as good as the effects on display, a raving, wild-as-hell acting job that gives the Invisible Man the right level of menace. A more subdued performance wouldn't have been able to carry this movie, but then it also wouldn't have made the guy seem like such a "monster", and then the whole story of the film really would have crumbled.

Clearly I don't think the 1932 The Invisible Man is a great movie. It's an astounding technical achievement and, despite its flaws, has a number of charms that can't be ignored. The film, though, is betrayed by story issues and the fact that Universe really didn't want to innovate when it came to the stories for their monster movies. The film is a treat for the eyes but lacking when it comes to delights for the mind. I can see why it was a hit back in the era it was released but, at this point, it just doesn't hold up at all.

And now I'm worried that the other films in this series are going to be really bad. Generally the Universal Monsters films go down hill really quick past the first film in the series. I hope that isn't the case here, but... well, we'll see next time.