Looking for the Holy Big Gulp

Indiana Jones and the Last Crusade

It's fair to say that after the relative failure of Indiana Jones and the Temple of Doom -- a movie that was only slightly less successful than then first film, Raiders of the Lost Ark, but was little loved by fans in the long run -- the film series needed a bit of a restart, a course correction to get Indiana Jones back where he needed to be. 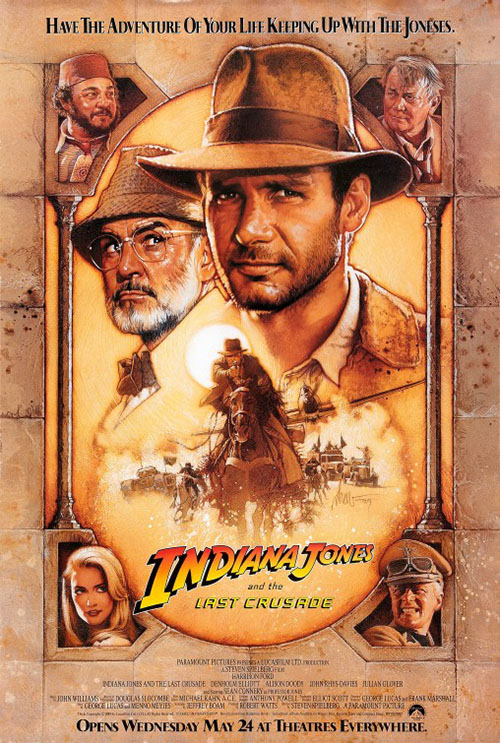 That would seem to be the thinking behind the third film (and first official sequel since Temple of Doom is a prequel), Indiana Jones and the Last Crusade. "You liked Raiders so much? Well, here's a movie that tucks right in along side that film neatly." If your Indiana Jones films have to have him going after a holy relic while battling Nazis, all while Indy grins his way through danger, this is exactly the sequel you were hoping for. Just don't expect it to tread much new ground in the process.

After opening with a sequence featuring Indy (River Phoenix here) as a teen, a (literal) boy scout fighting some treasure bandits in the hills outside his hometown, we bounce ahead to 1938 where Indy (Harrison Ford) gets some rather bad news about his father, Henry Jones (Sean Connery). It seems that the elder Jones was on an expedition in Venice, Italy, when he went missing. Indy, having just gotten a package from his father, finds that his dad sent him his "Grail Diary", a tome with all his notes, maps, and clues about the lost Holy Grail of Christ.

Heading to Italy, under the patronage of expedition financier Walter Donovan (Julian Glover), Indy takes ally and friend of his father Marcus Brody (Denholm Elliott) along as well. There they meet with Elsa Schneider (Alison Doody), a, Austrian professor of antiquities and the third member of the Grail team. Together they search Venice for the next clue to the location of the Grail in hopes that finding the path forward will also put them one step closer to finding Henry Jones. Unfortunately they aren't the only ones on the path for the Grail as the Nazi's also have their eyes set on the prize, and there's a mysterious group fighting everyone as well who seem to want nothing more than the keep the Grail hidden forever. It'll be a race between the factions as all sides head for the temple where the Grail has been buried for centuries.

At first blush there is a lot about The Last Crusade that resembles Raiders. We have Indy, joined by a (non-obnoxious) woman who can hold her own in a fight. Together they go off in search of a holy object (from the Judeo-Christian mythology) while hounded at every turn by Nazis. If the goal of the film was to make people forget all about Temple of Doom, it's questionable story, and annoying characters, then the producers managed that about as well as they could. 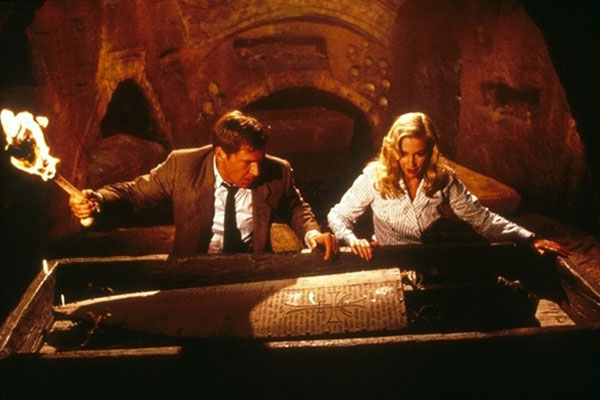 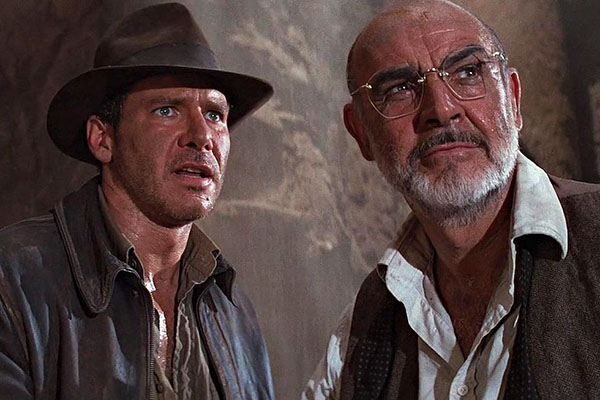 It's actually a bit weird coming to this film right after watching Temple of Doom, because you end up wondering what happened to the characters from that movie. Okay, sure, no one cares about Willie and we're all glad she's gone, but Short Round was actually kind of fun (I liked him at least) and he seemed to have a deep connection to Indy. Sure, Raiders didn't mention the kid (since Short Round wasn't introduced until the prequel) but some mention of the kid who clearly relies on Indy would have been nice. Instead we have a different character retconned into the movie, Henry Jones, Sr., to fill the role of "personal Indy gets to talk to while having adventures."

That's not to disparage Sean Connery's performance at all. He's wonderful as the elder Jones, finding a way to play his character as both distant and warm at the same time. The delivery of many of his lines is fantastic, such as when Indy is lamenting how he was never close to his father and Connery replies, with the right level of emotion and gruffness, "you left just when you were starting to get interesting." That line would be cruel from a different actor but it's funny and endearing here. Henry Jones is a great addition to the movie, a good foil for Harrison Ford's Indy as well as a proper contrast and emotional central figure.

It's one twist I really like about this movie. The previous films put an emphasis on Indy and his love interest (Marion first, and then Willie), and while Else is kind of a love interest the fact that she's secretly a Nazi (spoiler for a thirty year old movie) does put a damper on the connection between the leads (although credit to Doody, she makes the most of her screen time developing solid chemistry with Ford). That means the real emotional stakes of the film come not from sexual love but from the familial kind. You can see Indy and Henry grow closer and bond over their shared adventure, the first time these two have even been able to share one of these quests. It gives this film a different perspective that really does work.

Unfortunately everything outside the bond between father and son is decidedly less impressive. While this film tries to resemble the original in tone and plotting, it doesn't have the same rollicking pace and constant carnage that Raiders managed. This is, in part, because the film has more of a story -- the quest for the grail, the bond between father and son -- and has to take more time for the characters to talk, to plot, and figure things out. Raiders painted Indy as a walking cyclone of carnage, constantly getting into fights and always having to deal with the next danger, never getting a break, but The Last Crusade slows the pace enough that some of that energy is missing. 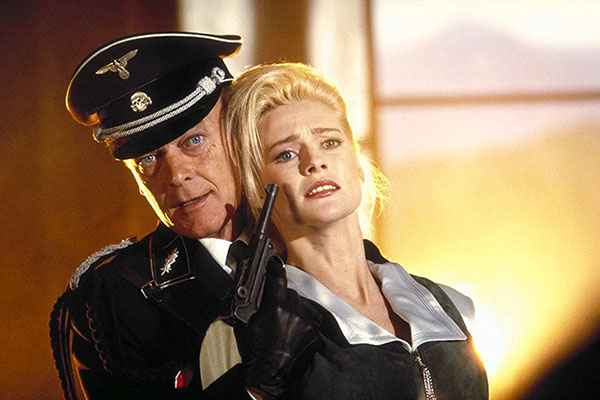 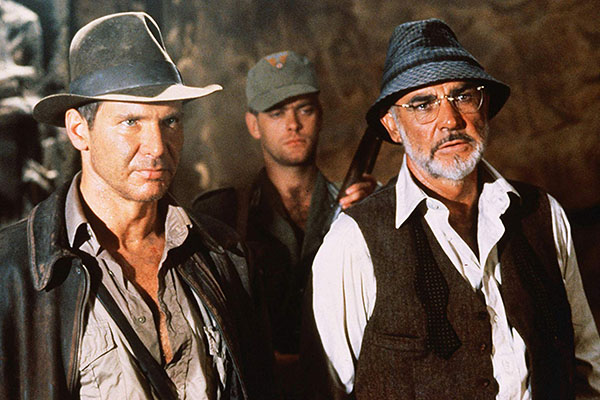 Certainly it doesn't help that the film lacks a real villain. Sure, Elsa is a Nazi but she seems conflicted over it, wanting more to search for antiquities than to give the Nazi's power. Donovan, too, isn't much of a villain; although he's aligned with the Nazis (for reasons that never seem entirely clear) he really just wants the Grail for himself. The Cup of Christ can, apparently, grant eternal life and Donovan wants to live forever. He doesn't care what the Nazis do with the prestige of the cup, he just wants the benefits. Neither of these characters, though, are fire-breathing villains which means the film relies more on the fact that Nazis are just bad on their own without giving us a specific Nazi to really hate.

That's really the big reason why this movie doesn't feel as successful as the first adventure: there's a core dynamic missing from this film, the hero-villain battle, and it keeps The Last Crusade from really flying as high as it should. We get that the Grail shouldn't fall into the Nazis' hands because Nazis are bad, but there's no one specific we fighting, no one the heroes have to chase after, no one to get in their face and laugh while they torture the heroes. A scenery-chewing villain would up the stakes, gives us a direct connection and make us think, "yes, this guy better not get the Grail." That just doesn't exist here.

It's flawed, but Indiana Jones and the Last Crusade is still a fun, enjoyable sequel to Raiders of the Lost Ark. It washes away the taint of Temple of Doom while giving us a fun, breezy, enjoyable romp. It might not be as good as the original but it's still the best continuation of the Indiana Jones series to date.