Indiana Jones and the Temple of Doom

Given the right team, George Lucas has the ability to spin gold (or print money, or whatever metaphor you want to use). The first film in the Indiana Jones series had just the right mix of people working on the film, from Lucas (who, whatever bad things I have to say about his films, is a genius ideas man), to master director Spielberg, as well as screenwriter Lawrence Kasdan (who wrote some of the biggest and best Star WarsThe modern blockbuster: it's a concept so commonplace now we don't even think about the fact that before the end of the 1970s, this kind of movie -- huge spectacles, big action, massive budgets -- wasn't really made. That all changed, though, with Star Wars, a series of films that were big on spectacle (and even bigger on profits). A hero's journey set against a sci-fi backdrop, nothing like this series had ever really been done before, and then Hollywood was never the same. films, including The Empire Strikes Back, plus, of course, scruffy leading man Harrison Ford. This team had just the right elements that, when put together, spun a shaggy dog story into a cinematic masterpiece. 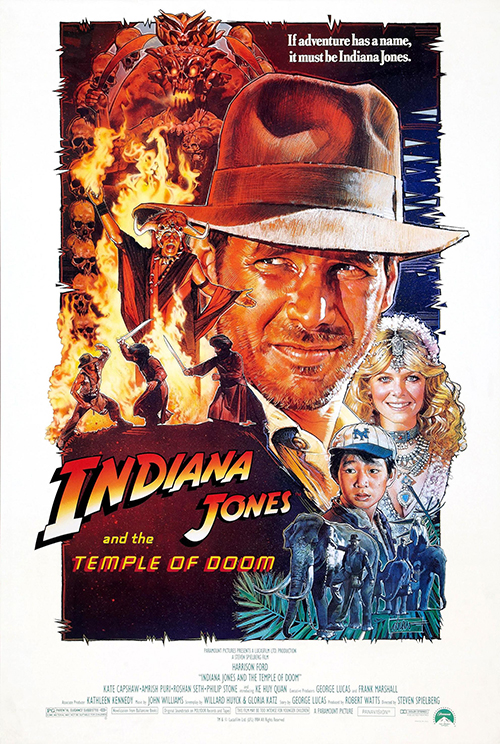 The 1981 film, Raiders of the Lost Ark, was a huge success, making $389 Mil off an $18 Mil budget. That's such a good return on investment it's not even fair to call it a "success"; that's a cultural phenomenon. Films today cost ten times was Raiders cost and are considered successful if they manage to make what the first Indy adventure brought in at the Box Office. Sequels were inevitable because Hollywood was never going to turn away money like that. The question was whether Lucas and Spielberg could craft this kind of success twice. The answer, sadly, was "no". Not this time around, at least.

Set one year before the events of Raiders of the Lost Ark, the 1984 Indiana Jones and the Temple of Doom finds our hero in Shanghai, finishing up an adventure to bring the remains of an ancient Chinese folk figure back to a Chinese crime boss. The deal goes south, though, and Indy (Harrison Ford, of course) ends up getting mixed up with lounge singer Willie Scott (Kate Capshaw) as the two escape Shanghai, with a little help from Indy's kid-assistant, Short Round (Johnathan Ke Quan). Their escape is short-lived, though, as the plane the escape on goes down (the pilots being paid off by the crime boss), and Indy and crew just narrowly managed to save themselves from the crashing plane, finding themselves stranded in India.

Venturing through the Indiana jungle, our heroes run across a small village. The village, some time early, was sacked by an evil cult, with their valuable totem -- a sacred Lingam Stone -- taken by the cult, along with most of the village's children. Venturing further into the sub-continent, the heroes come to the place of the Raj, which has its own secrets within. The palace has a temple hidden deep within, a temple the cult is using as their base of operations. Their goal is to collect all the Lingam Stones (five of which exist), digging in the mines beneath the palace to unearth all the missing stones. The kidnapped children work as slaves in the mines, and if Indy and his crew aren't careful, they could find themselves in a similar fate... or worse.

In basic construction Temple of Doom is a lot like Raiders. In both films, Indy goes from place to place, doing his usual half-assed version of archaeology, before some villain or another shows up and carnage ensues. But while the basic function of the two movies are vaguely the same, it's in the details -- the story, the action, the characters -- that Temple of Doom fails to live up to its predecessor. 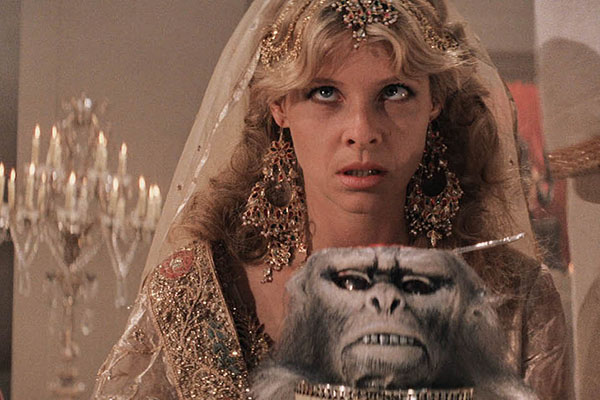 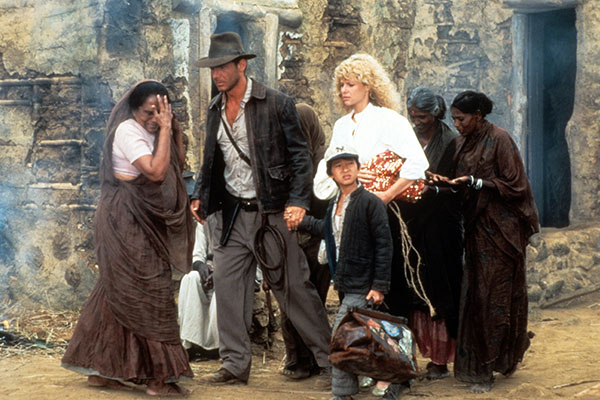 For starters, Temple of Doom lacks the energy or drive of Raiders. There's a common thought in Hollywood that, for an action movie, every ten pages of script (which usually denotes ten minutes of footage) needs to be punctuated by an action sequence. In Raiders that window felt much narrower, often on three or five minutes, because Indy never catches a break. Very rarely is Indy allowed to pause, to enjoy the moment, to catch a breath, before the next trap or danger or action beat starts up. Raiders of the Lost Ark is propulsive, constantly racing forward and heroes and villain desperately fight over the magical MacGuffin.

Temple, though, lacks that drive. There are big action sequences, sure -- the nightclub shootout, the plan crash, traps under the castle, and then the big climax of the movie -- they are few and far between. The whole middle section plods along, relying on comedy, not action, to carry the film. And while some of the beats are amusing (I honestly like the chemistry between Indy and Short Round despite how much the Internet might hate the kid) there's no denying that the whole middle act drags. It picks up some once the temple is revealed and the movie is allowed to revel in the occult and the weird, but by then so much of the energy of the movie has been sucked away that it's hard to care at all.

Some of this blame, let's be fair, rests at the feet of Willie. Kate Capshaw is a capable actress and, at times, she exhibits chemistry with Harrison Ford (although, let's be frank, when Ford cares he is capable of having chemistry with a mannequin), but her Willie is, at least eighty percent of the time, a complete and utter chore. She's obnoxious, she's whiny, and in general she's the worst "bitchy woman" tropes given life. Indy needs a love interest (he has one in every one of his movies) so this film gave us Willie. I just wish she was, in all respects, more interesting, less awful.

Not that Willie is the only problem. Lucas didn't want to use the Nazi's as the villain of the movie again (which is one reason why this film is a prequel), and that's fair; you don't necessarily want to go to that well over and over. The trick is that villains of the first movie were effective not because they're Nazis (although it's always easy to hate Nazis) but because they were introduced early and were constantly reminding you of their evil. Temple, though, doesn't give us the true villains of the film until the hour-mark when the cult leader, Mola Ram (Amrish Puri) is revealed. This leaves a void at the center of the movie; there's no one driving the quest aside from Indy, no one for him to go up against time and again, no one for us to hate. We need that so that we care about the adventure Indy is on. Mola is a scenery-chewing villain when he's around, but he not around early enough, or often enough, for him to have an impact. 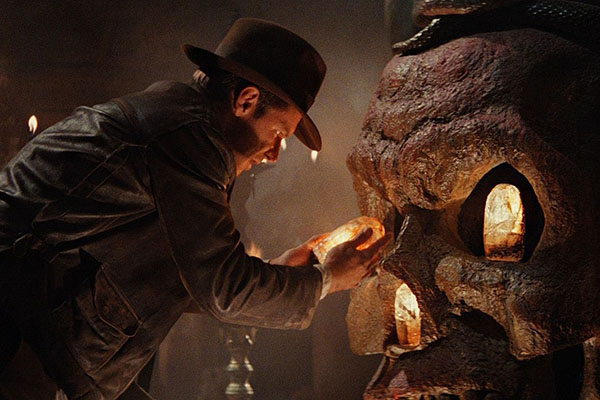 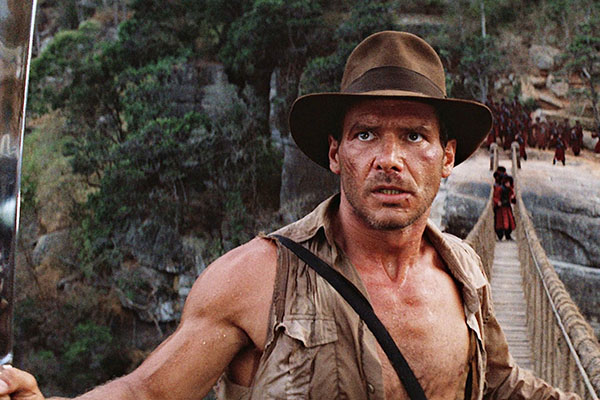 Frankly, the movie just doesn't have much driving it at all. The action, such as there is, fails more often than it succeeds, and this is, in large part, due to the limitations of the special effects. The team really wanted to push boundaries with what they could do leading to a lot of matting effects and composite shots, most of which look horribly fake. It's hard to get invested in many of the things going on in the film when you're actively noticing all the ways the composed shots just don't work, seeing edging around figures, improper lighting in composited shots, and bad coloring in a lot of the background mattes. I never once believed anything that was going on in this movie, as opposed to much of the action in the first film which felt so real. It just never worked for me.

But then, for a good stretch of the film the team doesn't even seem to want to deliver action. As I noted, much of the film is focused on comedy, and some of this comes at the expense of the Indian nobles in the palace. "They like to eat bugs, and snakes, and monkey brains. Aren't they gross?" The film revels in trying to gross us out but, often, it comes at the expense of the native Indian characters around our heroes. I doubt it was the intent of the film but the movie seems to be saying, "these foreigners are so backward. Good thing Indiana Jones is there to show how a proper white person composes them self."

Which also guides us to another issue: Indy is the "white savior" in this movie. I once again acknowledge that probably wasn't the intent of the writers, and when this movie made that kind of cultural awareness wasn't as big a deal in Hollywood. But going back to this film now and seeing a whole village of people who need someone to help them and Indy, the one white guy to wander into the area, is just the man for the job. Yes, the cult is terrible, enslaving kids and tearing the hearts out of people before sacrificing their bodies to the fires of Kali, but that only makes Indy's role in the movie better by comparison. Hell, we have representatives of the British Raj here, who at least historically would have better claim to helping the people of this region (even if they are white, too), but instead it's the foreign Indiana Jones that has to save the day.

Really, there's something icky about the movie, and not just because of all the bugs and snakes and everything else in the film. The attitude of the film is all over the place, pushing everything else down so that Indy looks better by comparison. It's like a reverse character assassination, an attempt to redeem our hero (who is a ruffian, a scalawag, and a real jerk, something the first movie knew all too well) by making everyone else worse. That might have been fine when it was Nazis Indy was battling (who, again, it's really easy to hate for obvious reason), but it's much more sketchy when everyone in the film is part of different race that, at the time, were oppressed by British Imperial rule. 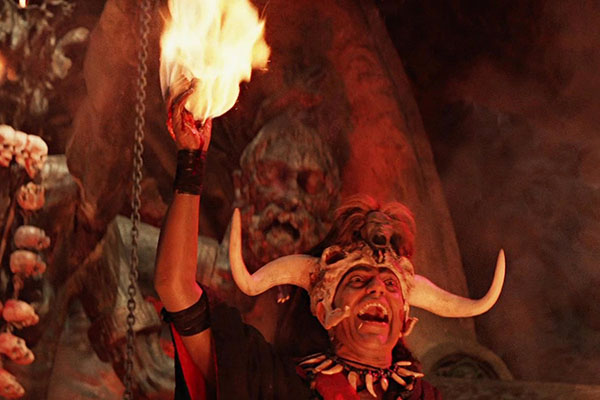 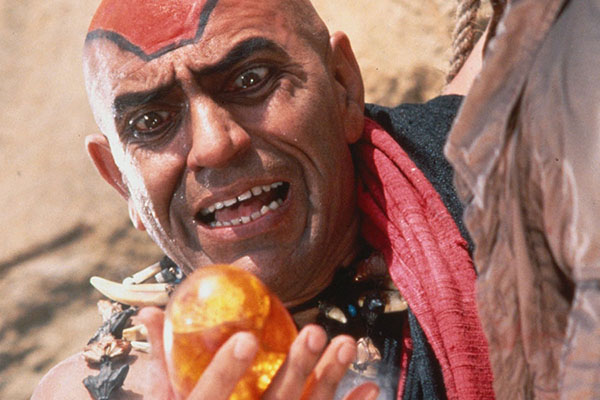 Temple of Doom was a financial success when it came out making a little less than Raiders on a little more of a budget. But, even at the time, the film was savaged by critics. Over time fans have come around to the movie, redeeming it (for them) due to the charms the film does have. Even I'm not going to argue it's a complete waste -- some of the action beats are solid, the basic story is imaginative, and I do honestly like the chemistry between Indy and Short Round (and I'm in the minority there, I know).

But, I don't feel like Temple of Doom is in anywhere the same league of Raiders of the Lost Ark. It's sloppier, it's slower, and it's less fun over all. It is, in all respects, and inferior film to the original. While I don't think it's worth all the hate some fans will pile onto it, that doesn't make it good. Thankfully for the legacy of the film, Kingdom of the Crystal Skull would eventually come along to claim the title of "Worst Indy film".