A Behind-the-Scenes Look at a Gaming Event

I've covered a couple of speedgaming events in the past, but they've always been from the perspective of someone watching the streams from home (or the YouTube videos afterwards). Up until this last month I hadn't had a chance to actually attend one of these events (time, money, availability all being factors), but that changed with SGLive 2019 -- the event lined up just right for me in a number of ways and, finally, I could attend an event and see one of these shindigs from the inside. 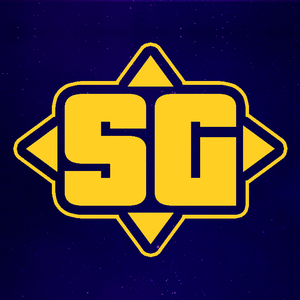 To be upfront about it, my primary reason for attending the event was to commentate a race in the "SGLive Marathon". I'm involved in the Final Fantasy Randomizer community, a rando dedicated to the original title in the series for the NES. If you aren't familiar, a randomizer takes an original game and mixes up any number of factors (depending on the flags selected by the players) before spitting out a refreshed version of the game. Deep down I've always been a fan of the original NES game and, after watching a number of races from the community posted to YouTube, I finally decided to join up and play the game for myself.

It's a blast, by the way, and I highly recommend this randomizer. Of course, I'm the kind of person that once I join up with a group I start volunteering for everything I can, so eventually I got involved with the event planning people and when SGLive put out a call for submissions to their marathon (which would run concurrently to thee tournaments happening at the event), I jumped at the chance. Our submission, a 1v1 race with myself and another gentleman, TrintonGL, commentating was accepted and we were off to SGLive to join in the fun.

Seeing one of these events first hand is a trip. I volunteered to help out at the event doing whatever odd jobs they needed from me (again, as is my way) so I not only was able to watch events but also help out with things behind the scenes. It is, actually, a lot of fun to be that deeply involved in an event like that (although it's also super tiring). And the setup for an event like this isn't easy -- there are a ton of moving parts that most people watching the feeds (or just sitting in the audience) would even notice. If something goes wrong, the team has to be able to adapt and work around it on the fly, and a number of things happened that cause the SG crew to have to adapt very quickly.

For starters some of their equipment somehow went back in transport and replacements couldn't be available until after the event was basically over. That required them to cobble together one tournament streaming room out of a planned to, and then to work to find a solution for the second room after they first got the marathon room working as well. And that was on top of some things never showing up at all, leading to more adapting. It wouldn't be fair to call it chaos as the leaders I chatted with (Feasel, JaySee, MsMetroid) all rolled with what happened and found ways to make it work. But seeing it first hand I could tell how stressful it all was. 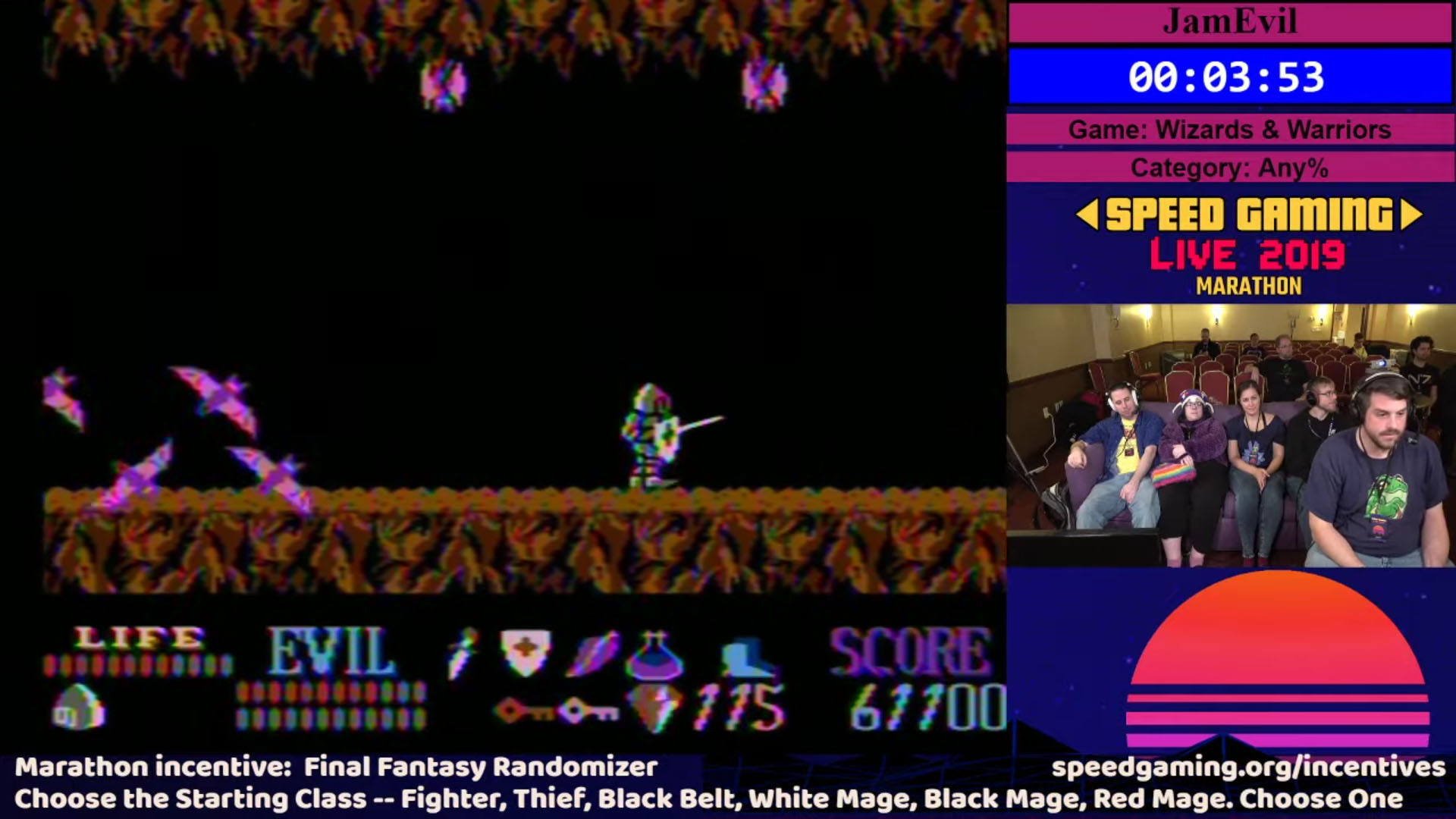 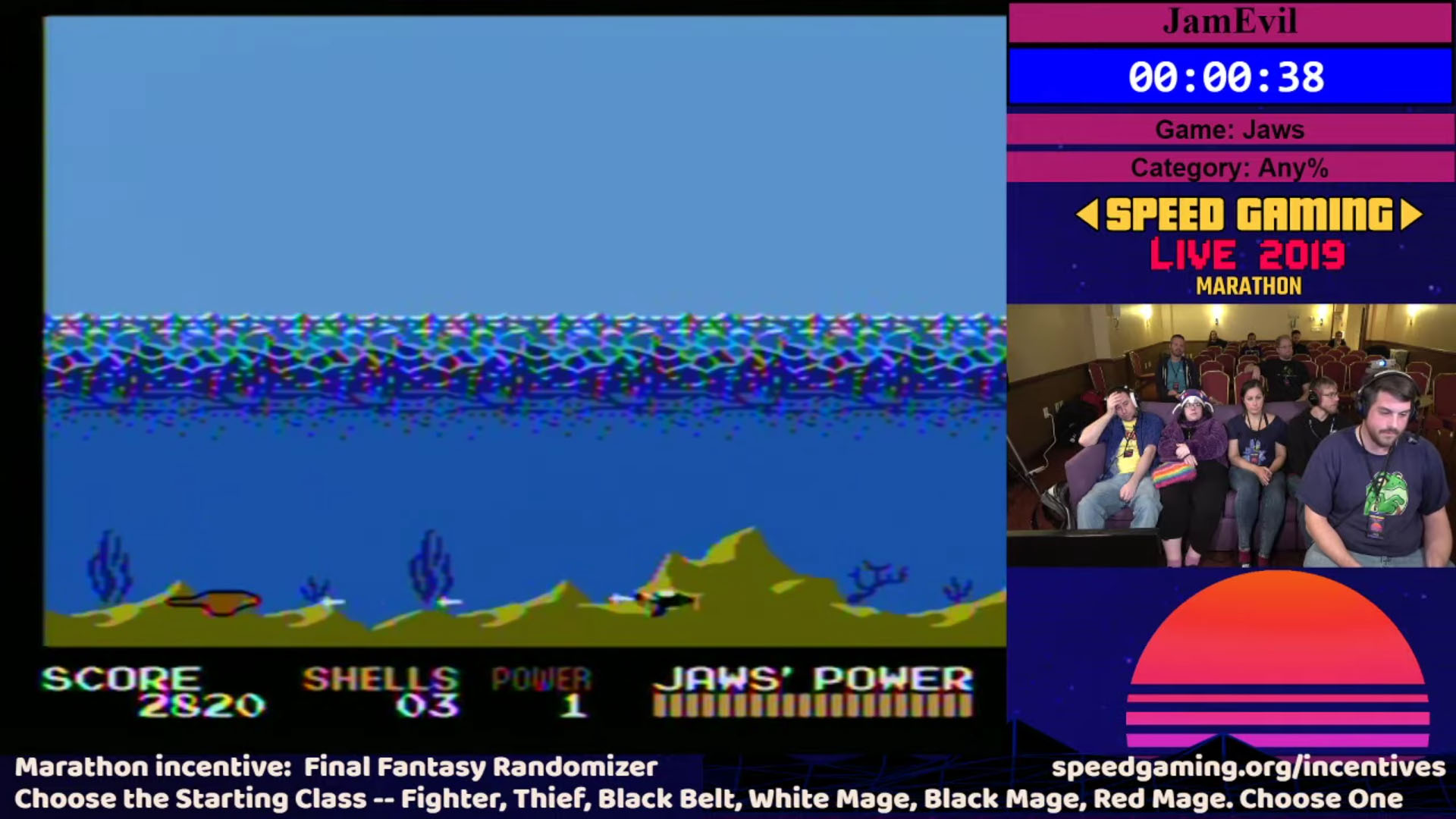 And yet the end result looked really good. For a first time event of this scale, it's fair to say that the SG team pulled it off. If you go and watch the recordings of their streams you can see a lot of people enjoying the games they love in a fun (well designed, well organized) setting. If you didn't know the stories of what all happened in the couple of days of setup you wouldn't have a clue anything was amiss. That's how it should be -- everything should seems so seamless that the audience doesn't know anything happened. That's the mark of a good event.

I know for a fact I'm going to go back to SGLive next year, whether I'm helping run something for the FFR community or not. This event was a blast and, despite (or because of) some chaotic moments I got to make a lot of new friends (and be a most useful mammal in the process). The tournaments were fun to watch, the marathon was great to sit in (and host for a session, and just be a part of in general), and overall the events was as fun as I hoped it would be.

Okay, Maybe a Couple of Runs:

But hey, for some of you all you care about are the events themselves. Let me tell you, there were some great races (some of which I can't spoil just yet because they're embargoed until they get posted live on the SG stream) and a few fun runs in the marathon as well.

The first one I want to highlight was a great run of "awful games" from JamEvil. Now, some of them, like Wizards and Warriors and it's sequel IronSword, aren't considered awful games (even if they really are), but others like Jaws and The Karate Kid are truly wretched titles. Still, watching him having fun playing these games and tearing them apart in the process was a joy to watch. Sometimes the best fun you can have with a game is playing a really bad one. 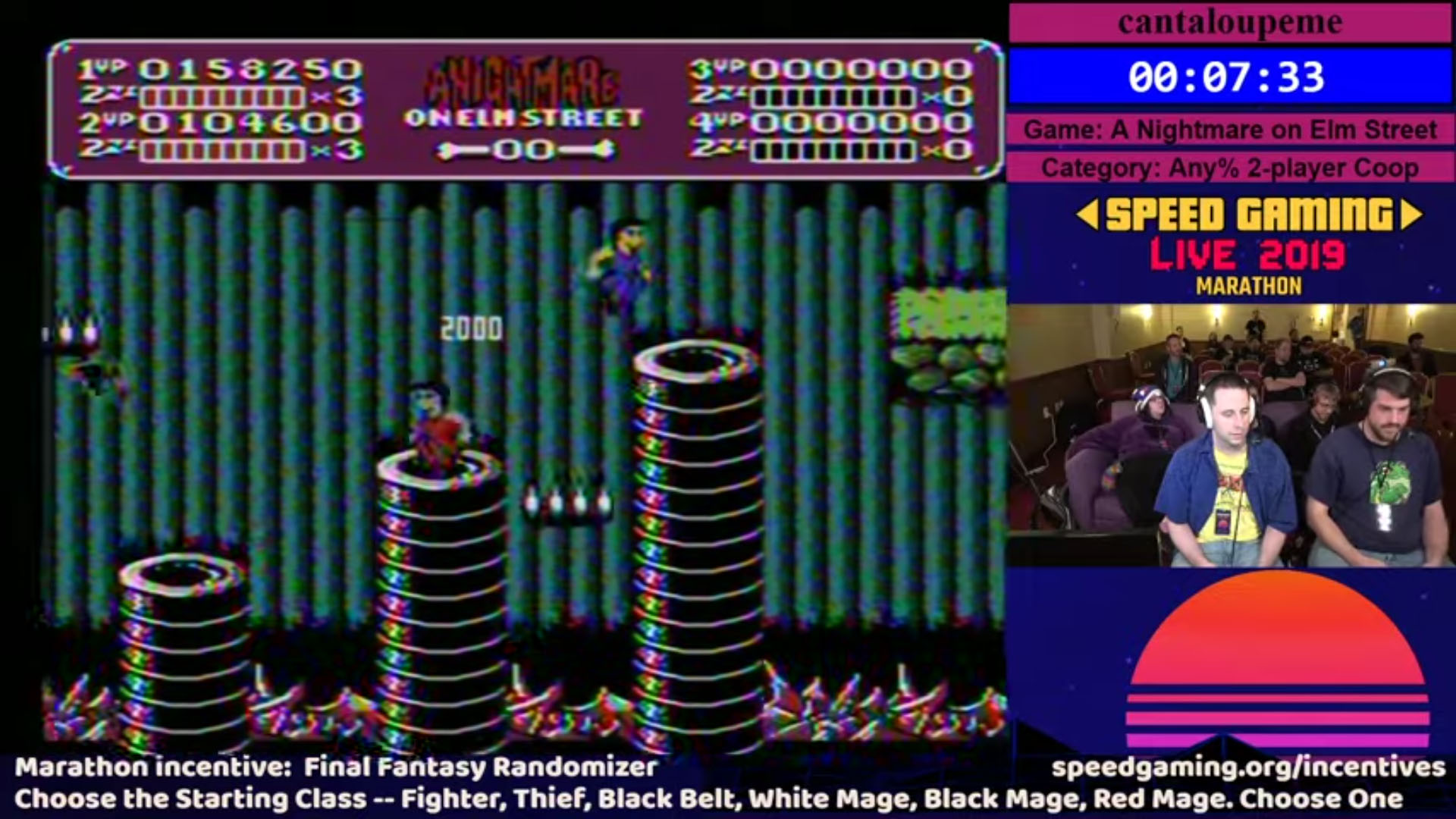 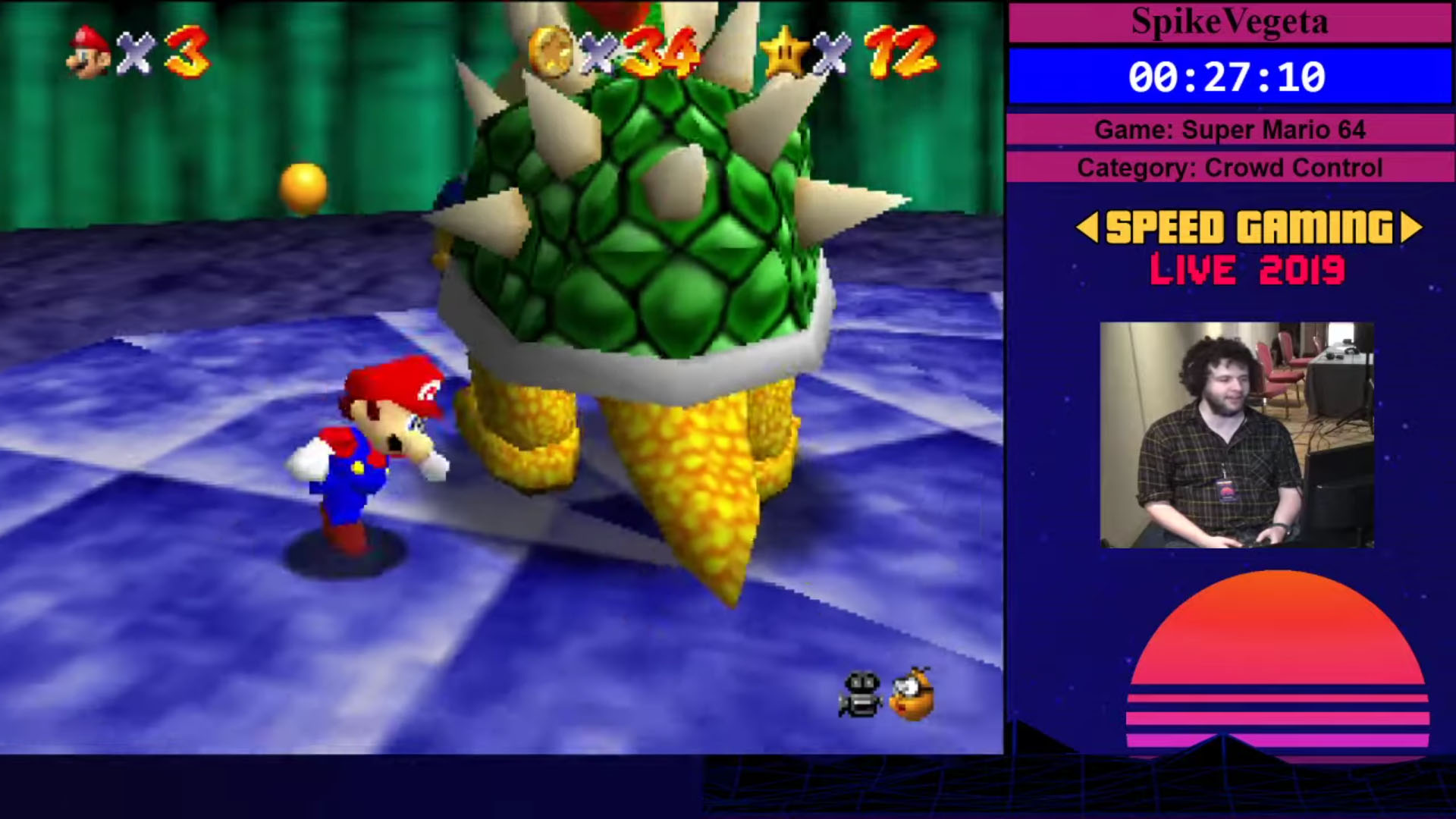 Following that block of games we technically had more awfulness with JamEvil as he brought in cantalopeme for a two player run of the NES A Nightmare on Elm Street. This is a very odd game involving up to four players (if you had the muti-tap) exploring houses in the Elm Street neighborhood, collecting all of Freddy's bones so they can cast him back into Hell (or something). It's a mean game, very difficult with constant enemy spam and a lot of nasty jumps. And yet, as a multiplayer game where you can screw around, have fun, and mess up other players, it's an absolute blast to watch. Plus, if you have any clue about what you're doing, this is one of those rare, "hard" games you can actually beat with some consistency.

I also want to highlight something I hadn't really watched before: Crowd Control. I've seen videos about this before, like A Link to the Past Randomizer: Crowd Control races, but I'd never actually watched them before. Crowd Control is more or less what you'd expect: a player plays a game and the crowd, on Twitch, donates money to help or hurt them in the process (usually hurt). It's fun to watch as the play struggles against what the donations are doing to them, and a good runner can mine comedy out of a Crowd Control event. No one, for my money, is better at that than SpikeVegeta, as shown in his Super Mario 64: Crowd Control run. This is fun to watch not only because of how the crowd screws with him but because he plays it off so well, finding the comedy in his own suffering. This was, easily, the best Crowd Control run of the event.

And, finally, if you want to see me and hear my (less than) dulcet tones, there was the Final Fantasy Randomizer race between Caleb and Dengwoo (with myself and TrintonGL on the couch). Watch it, I guess, or whatever...