War Is Hell... In Dreams

I remember going through the horror section back when I worked at Blockbuster (a detail that, every time I mention it, only makes me seem that much older now that Big Blue is dead and gone). I really wanted to watch all the horror movies I could, fill in that gap in my knowledge base. Horror movies weren't verboten in my household growing up, but they weren't watched all that often either, and most of the time it was zombie flicks (my family really loves zombie flicks). But there were all these slasher killers out there and I hadn't seen any of them before working at the rental store, so I took it upon myself to watch them all. I started with A Nightmare on Elm Street, considered by most to be one of the greats of the genre. I got got through that one and immediately went back to check out the sequel. 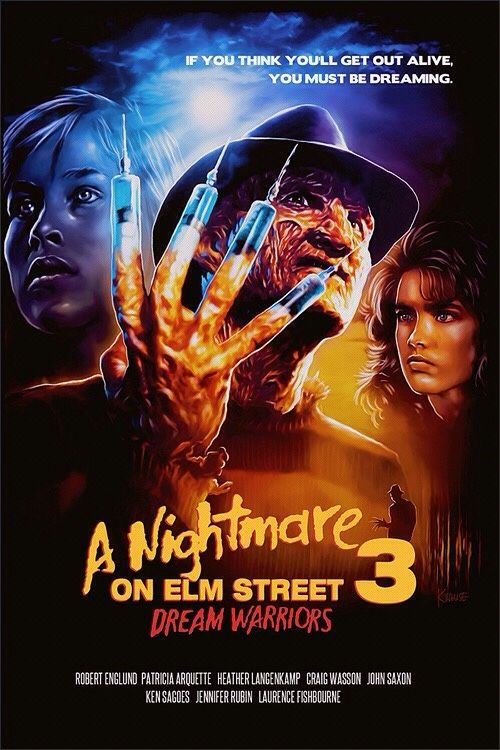 Suffice it to say that after that second movie, my zest for the Nightmare series was somewhat quashed. Still, even after that awful movie I went back for more, grabbing the third film in the series, and I was glad I did. While this third film does move the character of Freddy further into his "quippy comedian" phase of life (as opposed to the dark shape of your dreams, like he was in the first movie), the movie is overall a huge return to the form for the series. It also kicks off a series of interconnected movies that carry the series for a while (all of which ignore the events of the second film, as should we all).

Set some number of years after the events of the the first Nightmare, Freddy is back, terrorizing a new set of kids. One of them, Kristen, has been battling him for days, doing everything she can to stay awake -- she just doesn't realize how real the danger is. After escaping Freddy in a dream (so she thinks), Freddy comes after her in her bathroom, slicing up her wrists and making it look like she's tried to kill herself. This leads to the girl being committed to an institution, one with a whole ward full of kids that refuse to sleep (and, as we learn, all of whom are being chased by Freddy).

Thankfully, despite the rest of the hospital staff simply thinking the dreams are just guilt and sexual emotion (because haven't we all dreamed of a horribly burned man with knives for fingers when we're turned on?), one person believes the kids: Nancy Thompson (heroine of the first film, now a med-school intern). She knows all too well what Freddy can do, so it's up to her, and the kids, to find a way to defeat Freddy once and for all. But can she beat the system and save the kids before Freddy gets them all?

Originally intended as the last film in the Nightmare series by creator Wes Craven, there's a fair bit of continuity between this movie and what came before. The house from the first two films is a central location in the dreams of the kids, plus we have Nancy (a returning Heather Langenkamp) back in the fold as well as her father (no longer a cop but just a lowly security guard after the events of the first flick). Freddy keeps trying to find ways to gain more power and enter the real world, and the heroes have to find a real solution to destroying him once and for all (so, of course, we're going to find out where his burned up body was buried and use that as the next step in killing him for good). 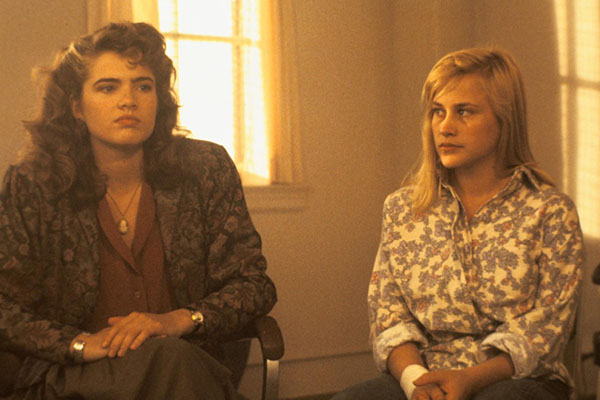 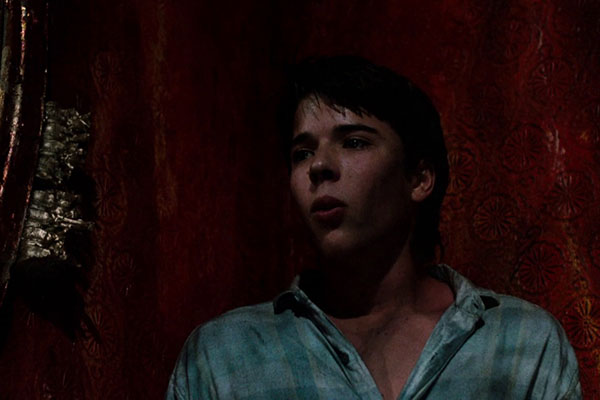 I did enjoy the different plotting of the film. The fact that it's not just another adventure with teenagers at school was good, a solid change of pace, and the hospital provided a different adult-teenage dynamic for the film to explore. Now the adults could literally force the kids to sleep (and then die at Freddy's hands) by giving the teens sedatives. There's a real sense of tension from this dynamic, a loss of consent and control at the hands of the people that are supposed to be protecting the teens, that fuels the film.

The fact that the hospital staff don't believe the kids also plays with the rules of the slasher genre. The adults say the dreams are just manifestations of guilt the kids feel, or sexual repression, and if the kids could just let go they'd feel better. But it's usually the sinful kids, the ones that drink and smoke and have sex, that die in slasher flicks. By letting go of their inhibitions and doing things that would, normally, make them feel guilty, they become prime bait for the killer. It's an interesting inversion, a way to poke at rules of the genre while also showing that no matter what you do, Freddy is coming for you.

The kills in this third flick are very interesting, at least in the front half of the film. I especially like the first kill for how gross and graphic it is (we're watching slasher flicks, after all, so gory, graphic kills are what we expect in a film like this). This film marks the point where Freddy starts to show his evil, playful streak, crafting kills to play to specific fears and desires of the kids (and not just always stalking them into a dream-boiler room and slashing them with knives). This trend would continue into the later movies, but considering the small cast of this film, and the fact that the kids are all given at least a modicum of individuality (instead of being cookie-cutter high-schoolers, as so often happens in the genre) the tailored kills actually have depth to them. Seeing some die from the very thing they love gives the kills extra depth.

Sadly, the movie gets really focused on its plot in the back half and starts rushing through the kills and the scares. The movie loses some sense of fun as the script rushed from plot beat to plot beat, all so the kids can eventually try to kill Freddy. It truly starts to run out of steam in the last 15 minutes despite the fact that most of the kills happen here, as if the director just wanted to finish the film and didn't feel like lingering on the parts the audience was actually there to see (kills and gore and death, of course). 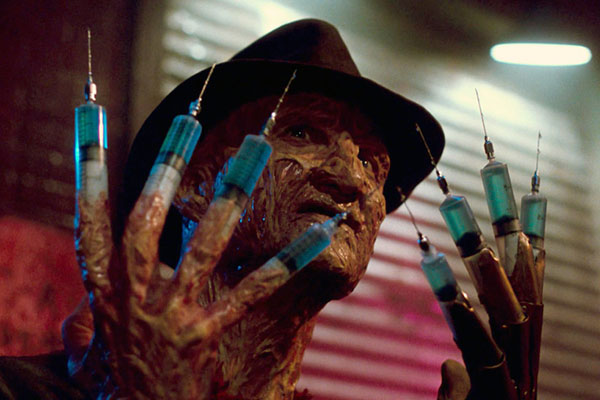 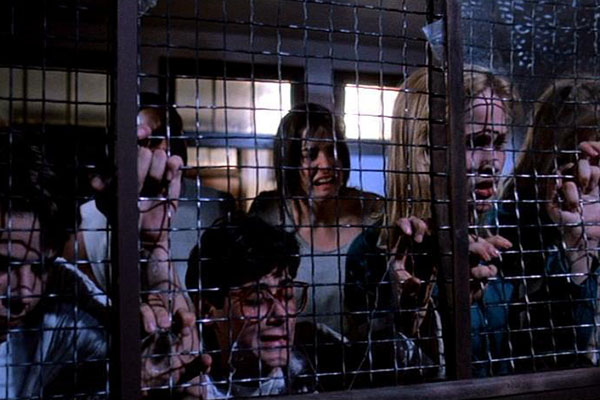 Plus, let's be honest, for all the interesting stuff the film does, it hadn't aged very well. It screams "I was made in the 80s" more than a few times, from bad special effects and compositing (there are some glaring, c-level digital effects when one kid dreams he's a wizard and starts casting magic) to terribly 80s characters (one girl dreams she's a tough punk with a giant mohawk and terrible Hollywood-ideal street tough clothes). The kids, too, don't really act like kids but what the director thought kids acted like -- they're less kids than 20-something adults playing teens in an After School Special, it's that kind of acting.

Still, the movie gets enough right to at least wipe away the terrible memories of the second film. If the series had ended here it would have been a fitting finale, a good way to send off Freddy and close out the trilogy of terror. Sadly, that's not how Hollywood works...

Hard to call it a sin when it's really just self-defense (in a way), but the Final Girl does attack someone trying to sedate her. Of course, most of these kids all sinned before we get into the movie, all having done whatever they can just to stay awake (including various illegal substances).

One kid does lust after an older woman, and a girl smokes. That's the closest we get to real sinning.

Freddy slices up the arms and legs of one of the patients and controls him (with the kid's long, veiny tendons) like a marionette before throwing the kid off the roof of the hospital (the kid was into puppets, so this death was very specific to him). Credit to the film for the graphic nature of this sequence; the stringy bits coming out of the kid's arms and legs are pretty gross. And, really, turning a kid who is into marionettes into a puppet himself is wickedly mean.

Six, including the original Final Girl from the first movie. This is a trend that will continue as the series goes on...