They Say It's Final, But It's Not

There's a certain irony in the advertising for Freddy's Dead: The Final Nightmare. Billed as the "last" Nightmare film -- a boast that was clearly a lie since audiences had to know sooner or later New Line would resurrect Freddy for another go round -- ads repeatedly stated that Freddy's Dead "saved the best for last." It didn't. It do very much did not. 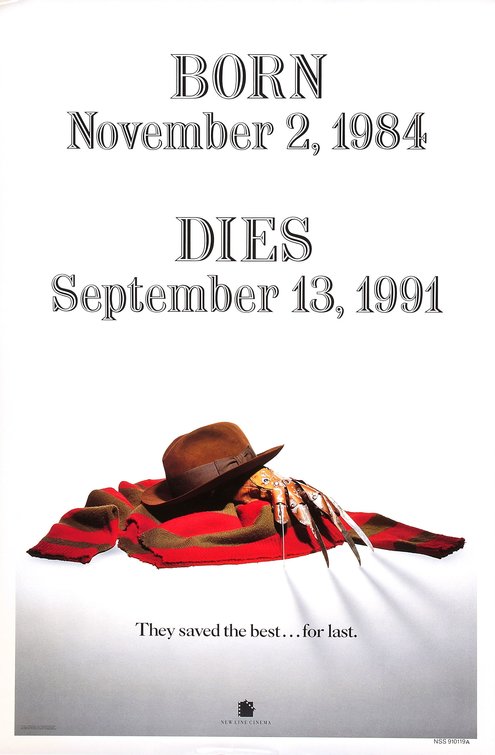 To put it mildly, Freddy's Dead is the worst film in the entire Nightmare series. The original Nightmare on Elm Street and Dream Warriors are great films while even the bad ones, Freddy's Revenge and The Dream Child certainly didn't lack for ambition. But Freddy's Dead is just a lazy, cartoony affair that feels about as far removed from a "good film" as you could get.

When the film opens, we're introduced to John Doe (Shon Greenblatt), a kid suffering the wrath of Freddy (Robert Englund, of course). Jon repeatedly attempts to escape from Freddy, but never can seem to quite get out of the mad man's clutches. After having killed every other child in Springwood, OH (which has apparently been the setting for all these films despite most of them clearly being filmed in California), Freddy is now looking to branch out to new towns, find new kids to terrorize; all he needs is a new vessel to carry him out of Springwood. That's John's job. Escaping the town, John ends up at a shelter for wayward teens at the next city over. There he meets a few other teens as well as one of the psychologists, Maggie Burroughs (Lisa Zane). Maggie tries to help John with his sleeping disorder, but in the end she feels like the only way to help him is to take him back to his hometown to confront his demons.

Naturally, that's a huge mistake as Freddy then starts feeding on the new teens she's brought to him. Also, apparently one of the kids in the group is Freddy's child (that we never heard about before and it really doesn't make any sense if you think about it), and they're the ones Freddy will use as his vessel out of town. Now the survivors have to figure out who Freddy's kid is and use that person to finally finish off the Dream Master once and for all... well, until the next movie, at least.

There's a lot we can complain about in this movie (so much, really), but let's start with the most glaring flaw of the entire film: it's simply not scary. As we've noted over the course of this series, Freddy Kruger went from a dark, menacing figure, a shape in the shadows that terrorized kids in their dreams to someone who cracked jokes and mugged for the camera. By the fifth movie he was barely a villain, more of a cartoon of his former self, and this movie completes that transition fully. Freddy here isn't scary in the least, spouting off more one-liners than an 80s action hero (and not even very good ones). He's annoying, a long way from the terrifying character of the first movie. 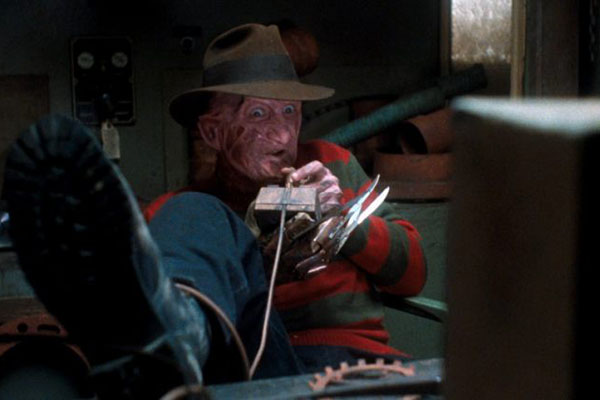 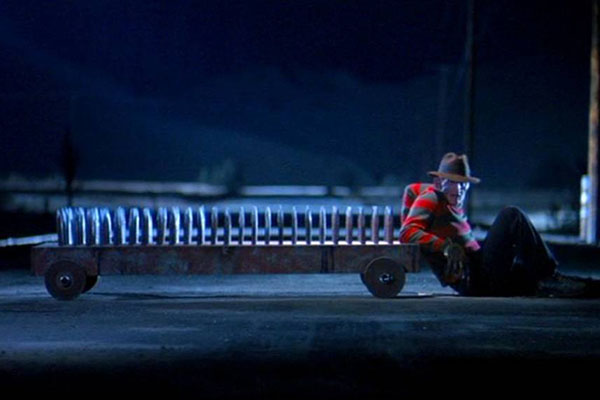 He's also been rendered into little more than a cartoon here. I don't know why the creative team decided that Freddy's kills needed to be cartoonishly stupid, but that's what they ended up producing. One kid is killed by being turned into a literal video game (and not a good one, even by NES-era standards -- this is actor in front of a green-screen hopping around while terribly drawn cartoons move around him), while another is done in my Loony Tunes-style antics. He kills kids the way Bugs Bunny and Daffy Duck would try to do each other in. It's beyond awful, but certainly not scary.

That's a big issue because without any scares a horror movie has to rely on its story and acting, two things Freddy's Dead is sorely lacking in. The plot is threadbare beyond belief, with characters moving around back and forth to Springwood simply to facilitate Freddy's antics. We're supposed to care about John Doe, but then he gets offed half-way in, and then we're supposed to care about Freddy's supposed child, but since that's a character never mentioned before in the series, it's hard to invest in them at all. More to the point, though, we're supposed to care because only Freddy's family can kill him (at least, I think that's what the movie was implying it). It's not very well developed, nor does it make much sense -- Freddy has already been killed by the spirit of his mother (twice, in fact) and that certainly didn't stop him. Why should being killed by his kid make any difference in the long run, either?

The half-baked story is only accentuated by the terrible acting. You can't care about any of the characters because they really aren't characters -- they're actors pulled in from some after-school special that were told to say likes and run around. They suck, is what I'm saying, and you can't invest in characters if they aren't acted well.

Even the people cameoing in the film, like Roseanne Barr and Tom Arnold for some reason, aren't really acting. They're cartoonishly over the top, caricatures of real people that are supposed to show Springwood has gone way off the rails and totally insane. Maybe if they were acted with pathos that could have worked, but no, ever person in the film is flat and unmemorable or totally over the top, cartoonishly awful. There's no middle ground. 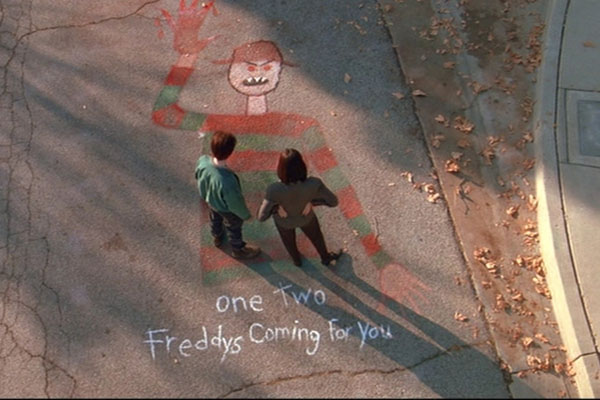 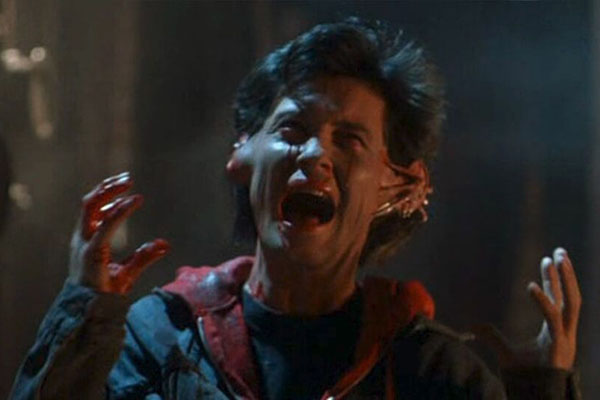 Well, except for a one-scene cameo from Johnny Depp. He actually shows what acting looks like, and then vanishes as quickly as he appears. I'm not sure how much money they had to throw at him to get him to do the walk-on, but honestly it might have been better if they hadn't. Having him in the movie only goes to illustrate how bad the rest of the actors are by comparison.

It's especially funny to watch this movie now because you have to wonder what New Line was thinking when they made Freddy's Dead. They really expected it to be a hit, even going so far as to film parts of the movie in 3D. These 3D effects are garbage, though, adding nothing to the film, feeling more tacked off than, in any way, necessary. But somehow the film did make money, suckering people in with the promise of a conclusion to the series along with some vivid 3D scares. Neither of those promises were delivered.

In short, Freddy's Dead is trash. It's a terrible movie with absolutely no soul and nothing to redeem it. In a way, I'm glad that this didn't actually end up being the last Freddy movie because, if it had been, it would have been a truly sad ending for this series. If ever any of the Nightmare movies were worth skipping, this would be the one to avoid at all costs.

None. One kid does a bunch of caffeine pills, but he's not the first to do (and it's an arguable sin since those pills aren't a Schedule 1 controlled substance). Other kids are runaways, but that's not a major sin usually worth of death in these films.

One kid is partially deaf, with hearing assistance via a hearing aid. In his dream Freddy steals his hearing aid, then eventually gives it back, but the hearing aid now makes everything super loud. Freddy then uses his long knife-fingers on a chalk board to eventually cause the kid's head to explode from the noise. It's really stupid (as are all the kills in this movie).

Three. They all happen in quick succession, and then the film devotes the rest of the run-time to Freddy's defeat. A pitiful showing for what was supposedly the last film in the series.