Coming Back After Some Time Away

Okay, so it really has been sometime since I last touched this game. Some of that is because of other projects I've been working on, but a lot of that has to do with the fact that I got heavily invested in Final Fantasy Randomizer and spent the better part of the last few months playing that game, working on stuff for the community around that game, and basically allowing that game to devour all my free time. But now I'm back, a once again (more or less) sane person that can play other games when I want to. 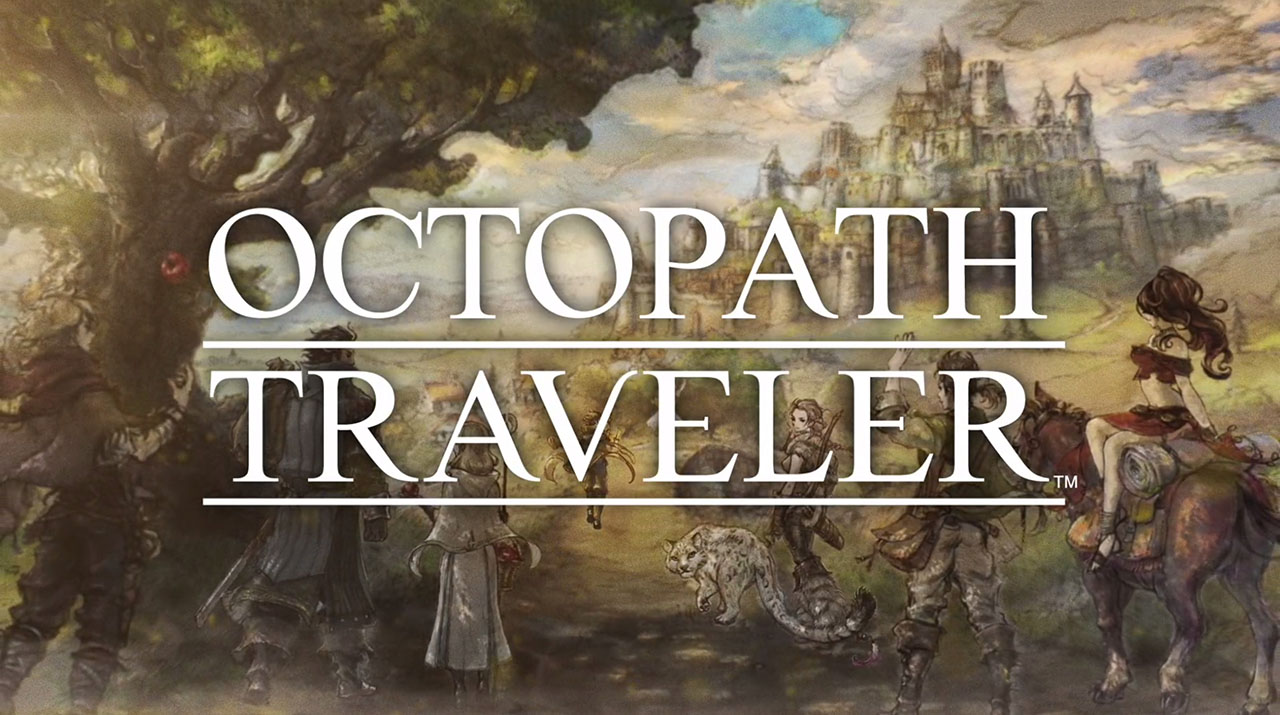 For this first dip back into Octopath waters, I took on two storylines for characters I liked, doing my usual thing to continue progressing the game...

I started off this week with Cyrus since his Chapter 2 adventure was close to where I left off. I used this as an opportunity to not only power up Cyrus but also to include Therion since I hadn't had him in the party much and he was sorely in need of levels. These two, with Cyrus as a Cleric and Therion as a Dancer, were paired with Tressa (who was working on being an Apothecary) and H'aanit (who was doing whatever she wanted because I already like her build out) to form my party. Then I went and ground up for a bit to try and get some levels.

This actually went much easier than I expected as I pretty quick scored another rare and elusive 100x EXP modifier from my dancing and, lo and behold, I had a party full of level 40+ characters. Seriously, I love the dancing. I fully realize that having a party of 40+ characters unbalances the fights for Chapter 2, most of which are geared for mid-to-late 20s characters. But at the same time the grinding in this game can be kind of a pain in the ass. It's slow to gain levels, annoying to spend hours doing it, so I'm glad there's a chance (even just a chance) to short circuit the system. And the fact that I've had it happen twice in the span of four long sessions is pretty awesome.

Cyrus's actual story wasn't really all that impressive this time around. He goes to a town, meets a female colleague from back in the day to discuss an evil book. The lady-friend really doesn't like Cyrus, thinking him a self-absorbed idiot (which, honestly, isn't untrue), but Cyrus is Cyrus and even when he's a total schmuck he's still delightful. Her feelings on the matter notwithstanding, the colleague puts Cyrus on a different quest to find some people that have gone missing in the town. And, wouldn't you know it, once Cyrus and his allies go into the sewers to find the missing people they also stumble across a copy of the book Cyrus was looking for. A battle is had with an evil necromancer, some people are saved, and Cyrus still fails to understand how to talk to ladies. Hurray for all! 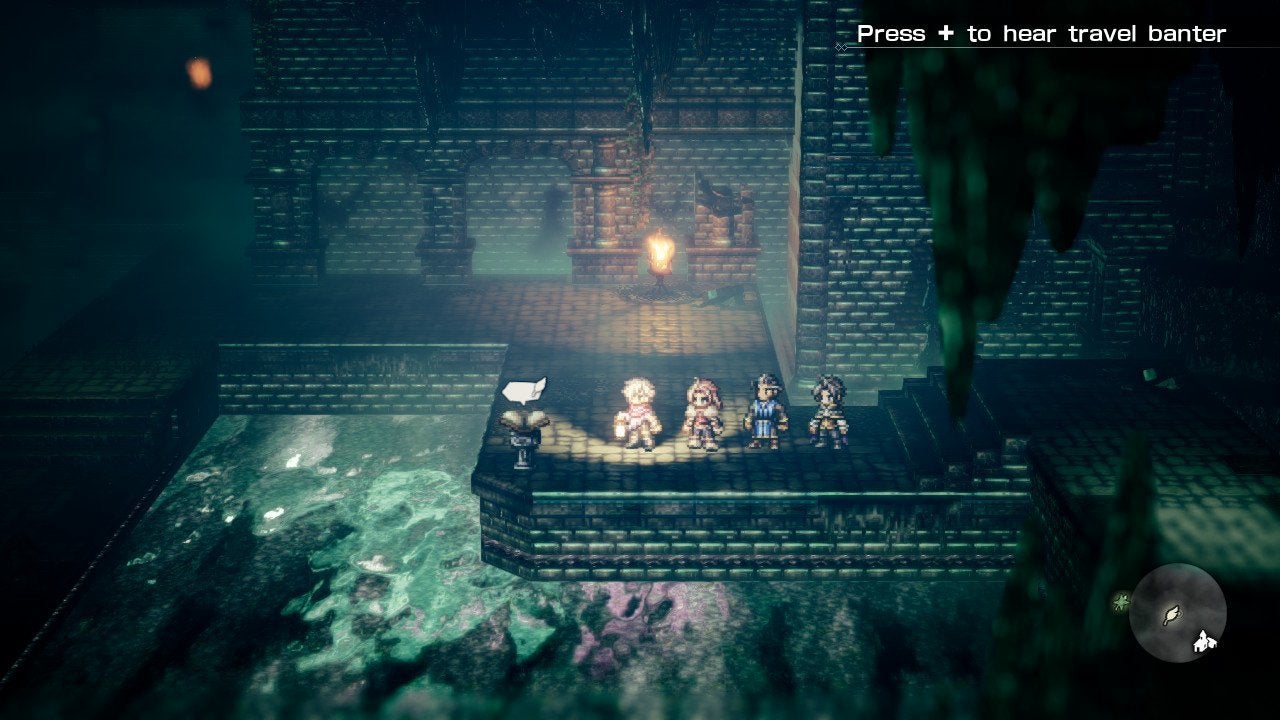 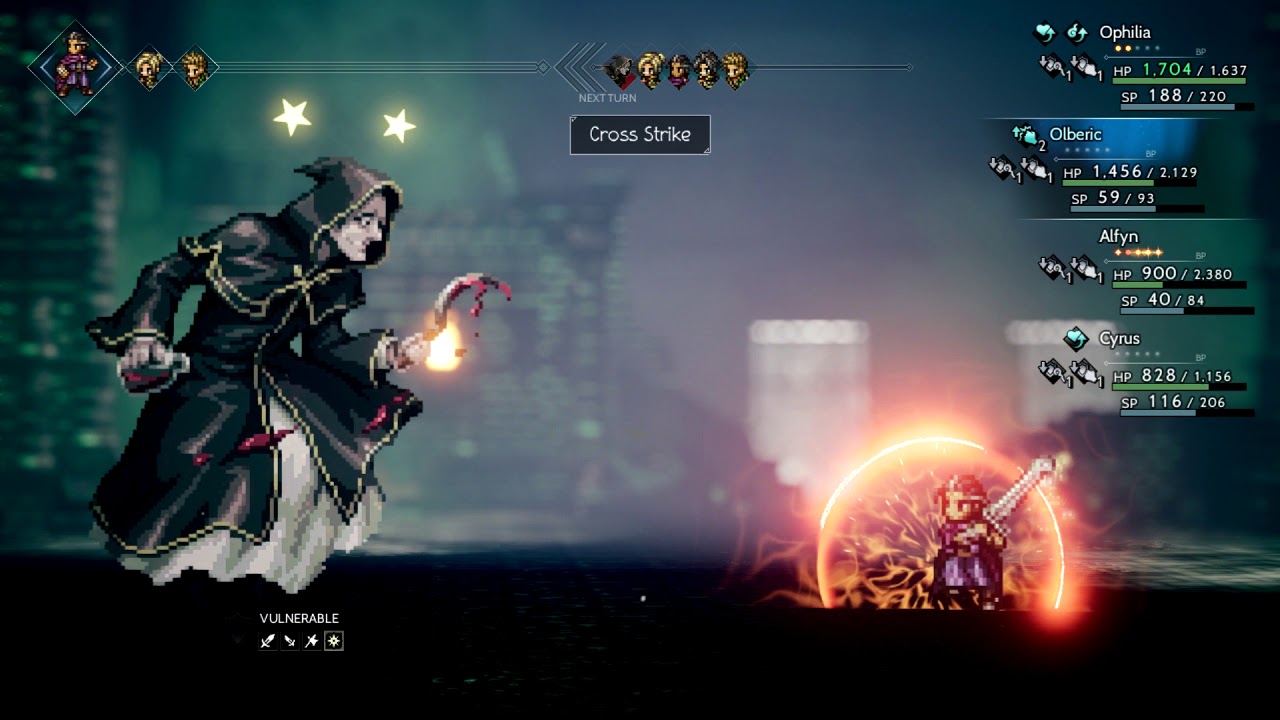 The battle was the best part of this scenario. While the necromancer didn't prove much of a challenge (my characters were 10 levels higher than they needed to be, at least) the fight was fun. He's throw out some spells and then summon skeletons that we had to fight, and the skeletons would guard the necromancer making him harder to damage. It was a neat mechanic and put a good twist on the fight. Of course, I could easily destroy the skeletons with a couple of charged spells (which Cyrus was more than capable of dishing out) and that was that. Still, I enjoyed this fight (even more so because it was a one-sided slaughter, which is always the best kind in an RPG).

Cyrus's story ends with the mage leaving town in search of an original copy of the book he wants while a dark figure trails behind. Nothing about his story was interesting, every twist expected, every interaction rote. Cyrus is a fun, stupid character but this story didn't do much for him. Hopefully his next chapter will have some more depth to it, something more akin to Cyrus's introduction, which I thoroughly enjoyed.

The Hunter Hunts the Hunter

After all this time we finally come back around the H'aanit's story. It's funny, really, because we're almost done with Chapter 2 all around (just Alfyn the Apothecary after this) and we're only now getting back to H'aanit who opened the game for us and became our main character (mostly because I didn't know what I was doing). That's not to say I hate H'aanit -- I have grown rather attached to her -- but there are aspects of her build I could do without. Specifically: animal capturing.

Each of the characters in the game has their own special ability, some more useful than others. Olberic, for example, can challenge people in a one-on-one battle (which, considering how over-leveled he is right now and the build I have on him, is a good way to have a one-sided, one-man slaughter), Therion can steal from people and open otherwise locked chest, and Ophelia can bring people to her cause to fight with her in battle. H'aanit's ability beast mastering wherein she can fight soften up monsters in battle, capture then (right before they die) and then unleash them in other fights. I really hate this mechanic primarily because the build I have for H'aanit (where she gets to be the best parts of a hunter, a dancer, and a soldier) is stronger than anything her summoned monsters (scaled to Chapter 2 areas) can do.

I mention this because H'aanit's story requires her to use her monster summoning ability to win a fight this time around. After tracking her master to the town of his lady friend, H'aanit then has to go into the forbidden woods outside of town to track her master's path and see where he went. While there she stumbles across a path she can't traverse and then, taking an alternate route, she finds a monster she has to scare off. And to do that she has to get into a duel with the monster battling with only her summoned monsters and nothing else.

It was a good thing I had stocked up a few monsters on a lark earlier because if I'd gone into this fight with my resources depleted I'm not sure if I would have made it through the fight (even at level 40). Being stuck with only my summoned monsters meant I only had one source of damage, one way to battle this creature. I lucked out that my monsters had attacks that could weaken the beast and actually get it into a break form so I could try and take it down. But that was luck and doesn't change the fact that this was a battle that I should have been allowed to handle my own way. 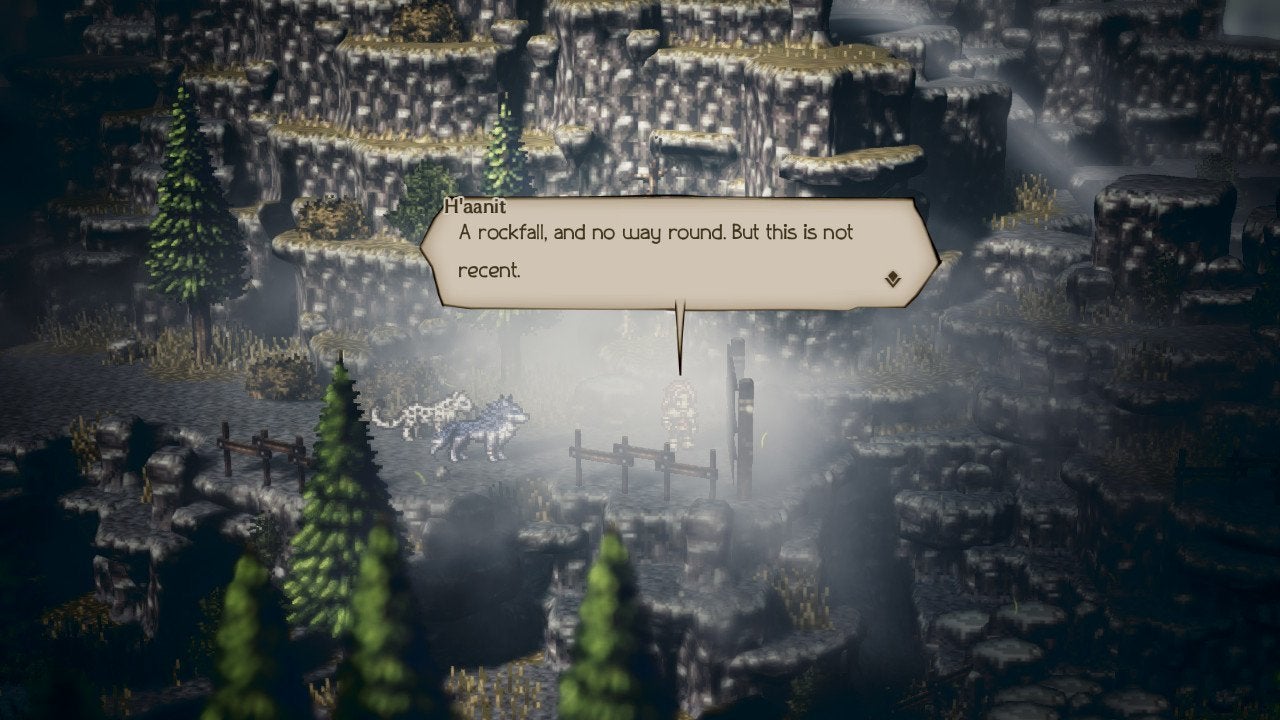 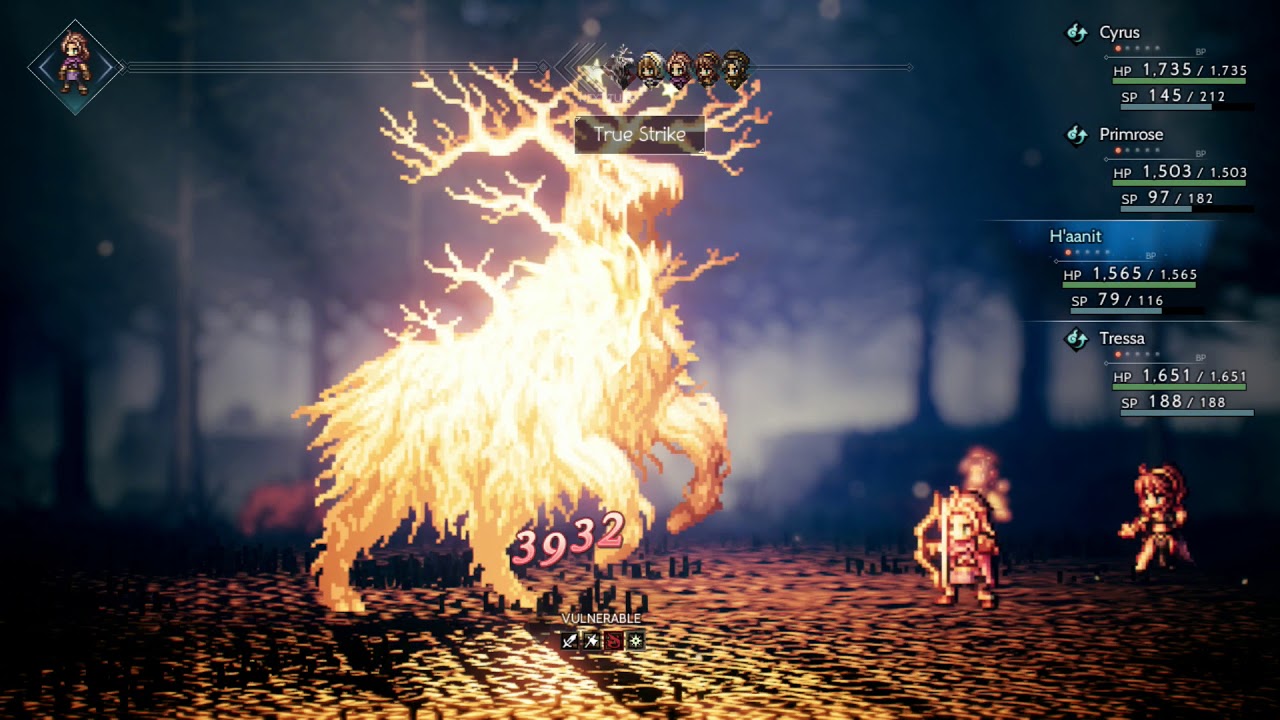 I like many of the mechanics in this game, but I like them more when I'm allowed to mix and match them, doing things in unconventional ways for interesting results. A Thief that's also a Cleric? Why not! A Hunter who attacks just about every other action because of all the options she has on her (extra turns, counter attacks, extra attacks)? Sounds great! That's Octopath at it's best. Being forced into a fight and having to do it exactly the way the game wants is Octopath at its worst.

After getting thought this fight, though, it was only to the clearing where we found H'aanit's master, turned to stone by an evil creature. After we first get attacked by a different beast, the Lord of the Forest (or whatever), we then get down to business. Her master might be saved but, of course, we have to go elsewhere to do that. So the statue will sit in the forest for the time being until we complete Chapter 3 (and maybe Chapter 4, if there is one). I'm sure he'll be fine and no random art thieves will come along and steal him away for a rich collector...

H'aanit's story was decent. It moved quickly, had a nice little twist at the end (with the master being turned to stone), and if not for that one encounter I really hated it would have been a fun little romp start to finish. I guess I'll just have to remember to restock her animal supplies for Chapter 3. Sigh.

Where The Journey Takes Us Next

We're nearly done with Chapter 2. I think it's just Alfyn left (although I'll have to check the overworld once we're done there). I already have Alfyn in position at Goldcoast so we'll tackle his adventure next time and then see where the winds take us...