After the success of Secret of Mana it was inevitable that Squaresoft would continue the series. In Japan, where Mana was Seiken Densetsu 2, the next game was appropriately Seiken Densetsu 3, a bigger, more advanced game (that was also a prequel) that pushed the SNES to its limits. It was so advanced, in fact, that after initial reports of the game coming to U.S. shores (as Secret of Mana 2), the game's Western release was cancelled (leaving this as the only console Mana game to, as of yet, never come to U.S. shores).

Instead, eventually, Squaresoft Redmond, the U.S. office for the Japanese company, began work on Secret of Evermore in 1994. They based the game on the engine for Mana and then started making their own tweaks to the formula and style, creating a very different kind of game -- one unlike Mana or Densetsu 3. Interestingly, due to it's U.S> heritage, couple of soft sales, this is the only "Secret" game to never make it to Japanese shores (an interesting parallel, there).

Secret of Evermore gets a bad rap because "we got this instead of the true Mana sequel," which really isn't true. The two games were developed independently and, in each case, porting the game across the pond would have been technically, and fiscally, prohibitive. When playing Evermore, you have to appreciate it for its own merits. If you then hate it, well, that's fair. It is, indeed, a flawed game.

In Evermore we follow the adventures of a boy and his dog as they are accidentally transported to the world of "Evermore". There, moving through three countries (that mirror three human epochs: Prehistoria, Greek and Egyptian classical antiquity, and European middle ages), the boy (and his magically transforming dog) has to unravel the mystery on the world and find a way to get home. To that end, the player takes control of the characters and guides them, actively, through the interconnected worlds, attacking enemies, leveling, up, and mastering alchemy, all for a chance to reach the fourth world, the futuristic Omnitopia, and defeat the evil that resides within.

On its face, Secret of Evermore seems very much like a Secret of Mana-clone. The game is played in the classic Mana/Zelda style with the heroes getting into active battles with the enemies on the screen. Everything is seen, and attacked, in real time with no need for random battles or separate battle arenas. The game is silky smooth and runs cleanly, without any hitches to the engine and stutters during combat. Many of the issues I had with the combat in Mana were fixed in the engine for Evermore which makes sense since this game was built for the SNES while its predecessor was designed for a CD peripheral that never happened and then ported and mangle to work on a cartridge. 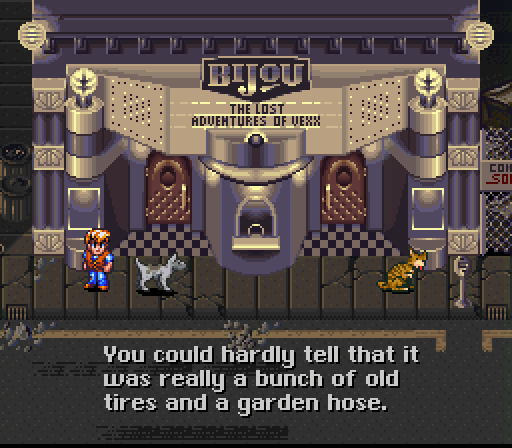 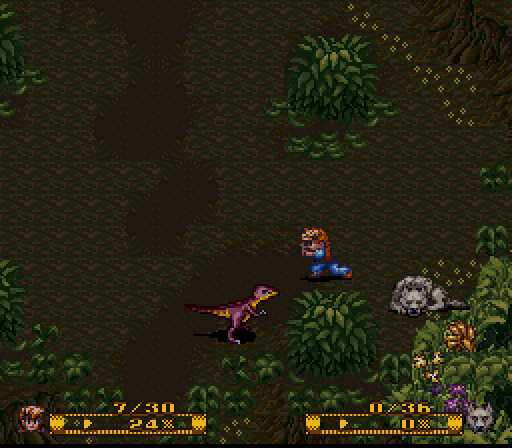 I also really do like the graphical style of the game. It's a clear refinement over Mana -- the graphics are still big and bright and cheery, but the colors are better used and everything feel more natural, less cartoony. The game is a treat to look at.

Sound wise, though, the game isn't as interesting. While none of the music, or effects, are bad, there aren't a lot of standout tracks either. I like remixes of the music that I've found originally, but most of the tracks in game sound like they were one or two refinements away from being standout tracks. You won't hate the songs, but I don't know that you'll really remember them afterwards, either.

And then there's the magic. While Mana used 8 spheres of magic (well, nine technically, but each of your spell casters was limited to one out of two for one section), each with a limited three spells to choose from. Knowing the weaknesses of bosses, and what the spells were good for, you could pretty effectively use your magic and win the day. Evermore, though, has Alchemy -- functionally it's still magic spells, but instead of the standard MP you use to cast, you have to buy ingredients, and combine them, to cast your spells. Run out of alchemy elements and nowhere near a shop? Too bad. This actually caught me more than one on my play-throughs, especially near the end and I had to scrape by (and reset a few times).

Worse, though, is that the alchemy magic doesn't have the same usefulness as classic magic. You'll earn spells here and there from random NPCs, building up, eventually, quite a long list. Most of the spells, though, have only limited usefulness. Once you're found a spell you like you're probably not going to switch off of it for quite some time. I gained a couple of spells in the antiquity area and used them all the way to the last world of the game -- they were stupid powerful and I had all I needed (when I had the ingredients for it). 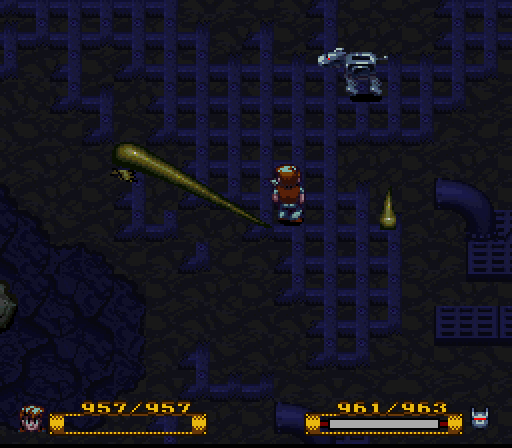 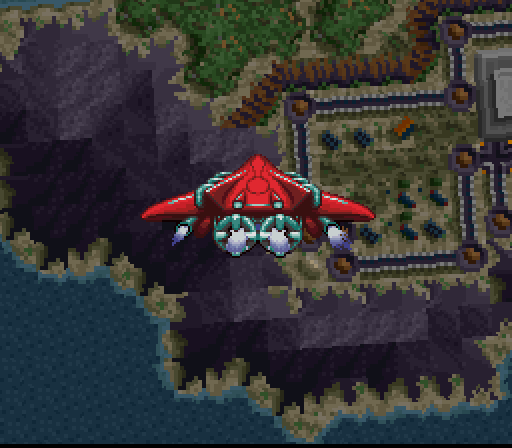 That last world, too, has its own big issue. Throughout the game you've been collecting swords, spears, and axes, the primary melee weapons your hero kid will use (the dog just bites because, naturally, it's a dog). Once you get to Omnitopia, though, you gain a bazooka. This gun is super over-powered -- the shells it fires (which you buy from concession machines) can blast apart most enemies in a single hit. It's supposed to be balanced by limited ammo (much like the magic, in a way), but the game wasn't programmed right and the ammo supply never runs out. I know it's not just my copy of the game that does this, either, because I've watched speedruns of the game and they capitalize on this fact. It's not cheating if you just can't run out of ammo. This really cripples the end area and makes it a whole lot less climactic.

In the end, the game has it's charms -- an amusing, if rote plot, coupled with good graphics and, of course, a fun to use game engine. Some serious issues mar the experience, and the end game is just broken completely. It's hard to say how much fun you'll have with it -- I know I only liked it enough to finish it the first time I played it, but I found the game more charming on a subsequent play-through years later. It's not a good sequel to Secret of Mana, but then it was never meant to be. Like it or not, it's best to go into the game with your eyes open. Give it a chance and you might just like it, at least for a little while.