For children growing up in the U.S. in the 1980s, there probably wasn't a game more prevalent in all their collections than Dragon Warrior (the U.S. name for Dragon Quest, changed here to avoid trademark issues at the time). That's not because Dragon Warrior was good, per se, but simply because it was, for a time, a free pack in with a subscription of Nintendo Power, and every NES-loving kid needed a subscription to that ubiquitous magazine. And then, because of that pack-in, the Dragon Warrior series became an overnight success in this country.

The thing is (and I know I'm going to get hate from some RPG fans for saying this), the early Dragon Quest game (or Dragon Warrior games if you insist on calling them by that title) really aren't very good. They're certainly playable, and an interesting counterpoint to the Final Fantasy-style games that dominate the genre. While both feature a hero exploring the overworld of a land, the Dragon Quest games try to find their own way through the genre instead of aping the various conventions of Dungeons and Dragons (because, of course, Final Fantasy was basically an off-brand D&D module turned into a video game).

The first game in particular bucks all the standard conventions you expect from an RPG. Instead of a large party of heroes you are but one man, the hero of Alfegard, sent out to gain access to the evil Dragon Lord's castle so you can defeat him and stop his darkness from spreading across the land. There's very little in the way of story beyond an opening introduction from the king of Alfegard, and progression through the game is entirely up to you. Essentially you're dropped in the deep end, able to go just about anywhere (if you can survive the journey) so you can find the materials you need -- the Stones of Sunlight and the Staff of Rain so you can make the Rainbow Drop that opens a path to the final dungeon -- to save the day. Beyond that, it's all up to you.

To say the game is daunting for a casual player is an understatement. I know when I played it back in the day I spent hours at the starting area grinding on simple slimes just so I could survive the journey to the first cavern. Of course, I felt the need to fight everything that came across my path (running is never an option for me), and that probably contributed to a number of the deaths my hero suffered. Still, one nice thing about the Dragon Quest games is that death is never that big a penalty -- when you die you're warped back to the starting zone (or, in later games, last castle you saved at), experience earned still intact and your wallet a little lighter. So long as you don't mind getting poor in the process you can throw yourself at any enemy you want over and over again to see what you can defeat. It's freeing, but I wouldn't call it "easy".

The game also does a piss-poor job of helping you along. While your character is made up of a collection of stats, the game doesn't give you much guidance on how useful those stats might be or how they relate to your enemies. You might be mowed over by an enemy at one level, and then suddenly able to take them on fairly the next, but just knowing you have "Strength increased by 4" doesn't necessarily convey that information in any meaningful way. Weapons and armor suffer similarly -- obviously the more expensive the gear the better it is, but when you can't compare and contrast what you have with the next upgrade, it's hard to tell if the extra point or two is worth the cost (especially when you don't really know what that extra point or two really means). If the game had been a little less obtuse with how its points worked the how system could have been easier to understand (making the leveling more enjoyable).

Not that grinding in this game could ever really be fun. If you're a casual player you'll end up spending a lot of time grinding just so you can get through the next dungeon, or the next zone, or kill the golem guarding a town. I think in my entire time playing the game easily eighty percent of my time was spent on grinding, usually on the same few monsters in a single zone over and over again. It gets real tedious real quick.

But then, since you really don't know the relative abilities of the enemies you fight, or why some can dodge your attacks while others nearby are weak to your strikes, it makes the whole process of exploring the game a matter of guess-and-check. This is where the openness of the game works against it. Since there's very little story, and everything is wide open to you from the world "go", you're left to stumble your way around on your own. Leave the safety of slimes and suddenly find some ghosts that destroy your face because you went the wrong way? Well, maybe you were on the right path but stepped slightly too far off the invisible path you were supposed to follow. It can be harrowing sometimes, forcing a number of resets that could have been avoided with a little more guidance, just a touch more hand-holding.

Of course, then everything is kicked up another notch once you make it to the final castle of the game. While some of the previous dungeons in the game could be long (two or three floor slogs to find one treasure you apparently need), the final castle, Charlock, is a nightmare. It's a maze of a dozen or so floors, with paths that twist back on themselves and stairs that lead to nowhere. A casual play could be lost in there for days without any way of knowing where to go or what to do. Then, if you do make it through there, you still have to fight the Dragon Lord, an enemy specifically engineered to be a brutal fight no matter how high you level or how good your stats might be. Lose to him and it's back to the starting zone to walk all the way back over and scale his dungeon once again just for a chance at maybe defeating him. It's awful.

With all these things against it, why do people love this series so much? Well, maybe I'm just not "good enough" for the game to enjoy its simple pleasures. The very things I found annoying -- the lack of direction, the cruelty of the enemies, and obtuse stats -- may be someone else's cup of tea. Remember that this game came out in the 1980s when every game was "NES hard" -- fans back then just expected a more brutal experience from their video entertainments. And, compared to other RPGs of the era, Dragon Quest was very different. No one was telling you where to go or what to do (beyond the overarching quest). For a certain kind of RPG fan, this might have been a breath of fresh air.

Plus, even I will admit the game has its simple charms. The graphics are decent, with cute overworld sprites and nicely detailed (for the time) enemies. Sure, everything is very basic, without a lot of animation (enemies don't move once encountered and there's nothing more than some flashes and shakes of the screen to indicate attacks), but there's still a bit of thrill to be had when a monster appears, swirling in on the screen to stare directly at you. Similarly the music is pretty good, with a few strong ditties in the playlist, even if there aren't that many tracks and you'll her the same few over and over again.

I can see why people might like this game even if it doesn't thrill me. For the time it was a pretty good first attempt at an RPG, open and free. It's very much a pilot episode for the series, as even the next game down the line introduced more heroes to the party, more story, and much more linear plot. Dragon Quest is a singular game and nothing, not even its direct sequels, played quite like this first title. How much fun you'll have with the game is really a matter of what you expect from your RPGs.

Considering the era it came out in, it should come as no surprise that the original Dragon Quest has seen a number of ports and remakes. The first was a Japan-exclusive version that combined the first game with it's sequel for Dragon Quest I + II. This port is considered by all to be the superior version of the game over the NES, introducing better graphics and sound as well as some basic quality of life fixes. One nice little touch is the ability to throw torches (items needed in the original version of the game to light dark dungeons) at enemies to deal damage. The damage done from this is usually more than your starting hero can deal, and this in turn allows the players to go in many more directions than before because they can take out a greater number of enemies. Quite a nice little improvement that opens the world up further.

Although the U.S. didn't get this compilation, we did get a later port of it, Dragon Warrior I & II for the Game Boy Color. This game doesn't have the really nice graphics and sound from the SNES version (since it was on the GBC), but it does include all the lovely quality of life upgrades and re-balancing bonuses. For Western audiences, this would be the best version of the original game we could (legally) get. 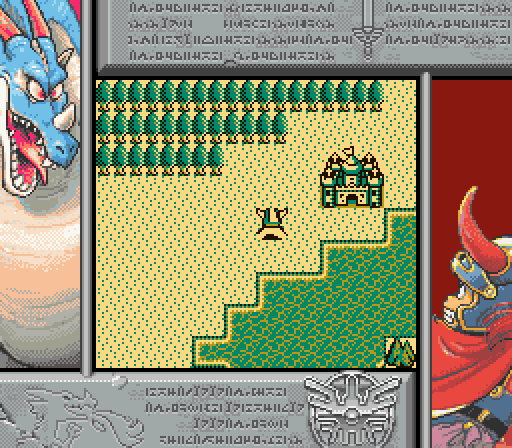 Of course, there have been multiple other versions put out, such as editions for mobile phones and, later, another Japan-exclusive mega-compilation of all the various versions of the game (and it's many sequels) for the 25th anniversary. Still, for the money, the GBC is the best version most of us can hope to attain (especially since it doesn't require us to learn Japanese to play it).