When someone asks me, "what's your favorite game?" my instant, gut reaction is to state "Chrono Trigger, hands down." It doesn't matter to the context for the question, whether it's a discussion about video games or board games. If someone wants to know what my high-bar for a game is, no matter what, that answer is Chrono Trigger. But why? 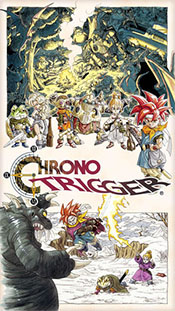 Well, for starters, I'm a sucker for time travel. While I really dig on stories where actions in the past are then explored when characters move into the future, or where self-fulfilling time-loops are created, I do also just enjoy the fish-out-of-water aspects of moving characters from one time period to another and seeing how they react. While it's easy to think, "hey, I could survive in the 1950s, a la Back to the Future," the simple fact is that we, modern humans, would probably stand out if we went to the (even recent) past. Even without language barrier we still have different slang we use, our money looks different, our clothes, everything about us. We'd have to prepare a lot for a scenario like this, and if it just happens spontaneously one day, we'd be screwed.

So yeah, I like the early portions of Chrono Trigger as the plot explores the events that occur due to accidental time travel. Our wordless protagonist, Crono, wakes up one day and goes to his city's Millennial Fair, and big once-every-1000-years celebration. There he bumps into a girl, Marle, and the two hit if off. But trouble lurks when they go to see an exhibit built by Crono's friend, Lucca. Lucca's experiment, a teleportation device, reacts to the pendant Marle is wearing, and then Marle disappears. Crono jumps into the newly made portal to track the girl down, and that's when the time travelling begins. All this is the opening prologue, and the game barely rests from there.

In many ways, Chrono Trigger is a pretty bog-standard Squaresoft (pre-SquareEnix) JRPG. You get your team of reluctant heroes who get sucked up into a whirlwind adventure to save the world, all while exploring dungeons and battling enemies. If you ever played a Square game before you probably will be familiar with many of the basic mechanics. Many of the items have similar names and functions to other Square RPGs (like Ethers and Elixers). Your characters all do battle on a field with the standard active time battle meters ticking down below. And, of course, if you look hard enough you'll find a Biggs and a Wedge, two recurring character names from the Final Fantasy series, tucked into the game as Easter Eggs.

It's the changes to the basic formula, though, that help Chrono Trigger shine. For starters, battles aren't random and don't occur out of nowhere. When you explore dungeons and other terrain, you'll (more often than not) see the enemies hanging out on the map. If you engage with them in battle the game doesn't cut away to a new "battle zone"; instead, the battle occurs right there on the main map. This makes the whole structure seamless, never splitting your focus of where you are. Plus, since the enemies can be seen on the map (for the most part), you can actually avoid many of the fights if you so choose (for the record, I never did). 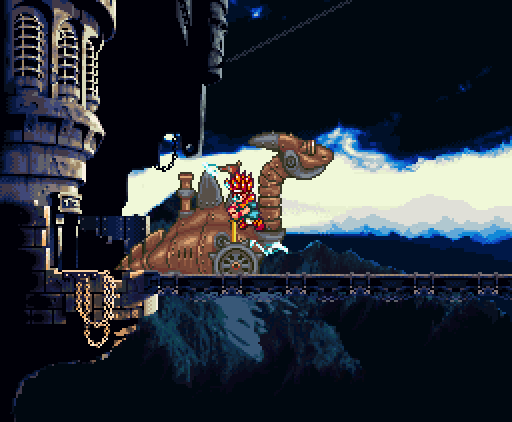 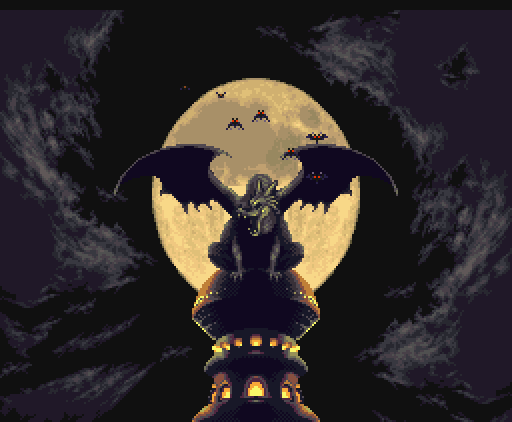 The actual battles themselves are different, too. Since your characters go into battle right on the map, they will often assume positions relative to where they were initially, as do the enemies. This causes the battles to have a more organic feel, and sometimes it'll be hard to predict just what shape the formations will take. Your characters will jump and move around the field as you give them commands, never standing in one place and just whipping their sword around (a la the old characters in Final Fantasy). Plus, there are special attacks and magic spells they can cast, all of them character specific. It's especially cool once you start unlocking double- and triple-techs that use the specific characters in your party for increasingly powerful effects.

I also appreciate the fact that grinding it's really necessary for this game at all. Chrono Trigger is very well balanced, ensuring that if you follow the basic story along and take the various battles as they occur, you won't ever have to spend time grinding on enemy battles just to make it to the next area. You can play this game, start to finish, without even saying, "okay, now I need to go to this zone and spend a couple of hours taking battles." Considering that grinding is still a staple of the genre, something players are expected to do just to finish a game fully, the fact that Chrono Trigger never expected this of players was a breath of fresh air.

And then there's the fact that, for me, this is the prettiest game of the era. There's life and detail in Chrono Trigger that trumps anything Square (or anyone else) managed to do with the SNES hardware (and whatever the Genesis fanboys may say, the SNES was better at graphics). This game is, at times, breathtakingly beautiful, but even the basic battle maps and enemy sprites show a level of care and consideration, spit and polish that put Chrono Trigger in a class by itself.

The music, too, is a step above most of its competitors. The Chrono Trigger soundtrack is often considered one of the highlights of the SNES era, with many reviewers still considering it one of the best video game soundtracks of all time. What the composers managed to do with the SNES hardware, pulling together tracks with power and soul that don't sound like they're coming from a 16-bit system, is astounding. It's hard to forget those first, ominous notes in Magus's theme, the tinkling bells of Schala's song, or the ramp up in music as you blast through one stage of the end boss, Lavos, after the next. Now, I will fully admit that the soundtrack may not stand up to some of the later music that came out on better hardware -- the jump to CD Audio alone improved soundtracks over all -- but the limitations of the hardware only accent how good the soundtrack for Chrono Trigger really is. 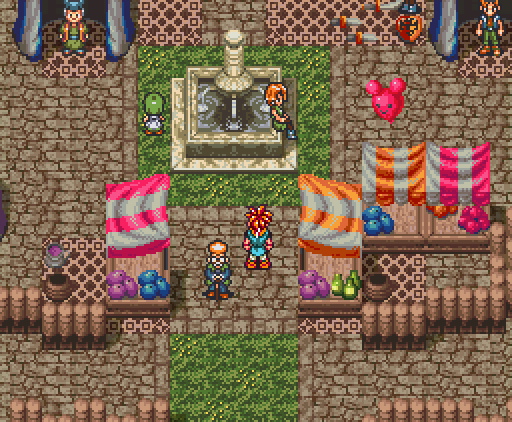 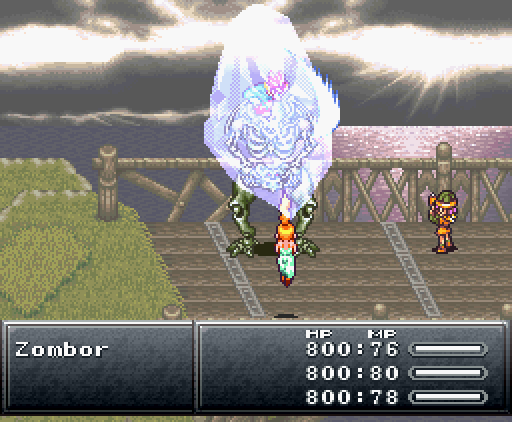 Yes, I'm an unabashed lover of this game. Yes, I do think this game is one of the greats. And no, I don't think there are any real flaws to the game. It's a rare product that come to fruition and can be considered "perfect". Hell, I don't think I've ever give anything a full 10-out-of-10 before (for any of the times I have done numbered scores for reviews). Were I to give this game, in its SNES incarnation, a score though, it would be perfect. Maybe you disagree, but I think you're wrong.

Although the SNES version of the game is, for me, perfect, Square did eventually put out other versions of the game on newer (for the time) hardware. These editions aren't always as good as the original:

Of course, none of these re-releases would betray me as much as the kind-sorta-sequel, Chrono Cross. We'll discuss that game next time...