The Song of Bards and Heroes

I love watching speed-running marathons. It fun to see people absolutely break apart games, to be sure, getting times on games I could never even hope to match. But I also love the experience of seeing games that are new to me, newer titles that runners have just found as well as older titles I might have missed. The quick format of a speed-running marathon makes it perfectly suited for me to find all kinds of new titles I want to add to my list.

While speed-gaming marathons are great, you don't tend to get a lot of RPGs there. Sure, you'll see the occasional Final Fantasy, Dragon Quest, or Kingdom Hearts game there, but those are the big titles, the ones everyone expects to see. To really showcase the full breadths of RPGs, though, a marathon dedicated just to RPGS was needed.

Thankfully, for the last few years RPG lovers have had that outlet: RPG Limit Break. Since 2015 (and maybe longer, although their archive only goes back that far), RPG Limit Break has served as an outlet for RPGs all year long. While the marathon, supporting the National Alliance on Mental Health, is their big event every year, they also play host to other events as well: various series relay races, RPG tournaments, and Final Fantasy V Four Job Fiesta.

RPG Limit Break 2019 was held in May and raised over $170,000 for NAMI. Four Job Fiesta, meanwhile, had it's big kick off event a week ago and is going on for the next three months, open for anyone to join and help support its charity of choice, Child's Play.

A marathon lives and dies by its games, and thankfully there were a number of great runs to help carry this year's event. Now, I will admit that I'm not in tune with the classic, sprite-based RPGs of old than the modern, polygon-rendered affairs. To me it feels like something was lost when RPGs went with real-time combat, a sense they went for style over substance (and feeling not helped by the fact that, for years now, it's felt like the biggest RPG maker around, Square-EnixFormed from the unification of Squaresoft (home studio of Final Fantasy) and Enix (creators of Dragon Quest) this combined company is the largest game studios in the world. From action to adventure titles and, of course, JRPGs, Square Enix has become one of the biggest names in gaming., has lost its way). Thankfully early in the marathon we had a game that helped to bridge the two styles of games: Adventures of Mana. This is the second remake of the classic Final Fantasy Adventure and, this time, the designers tried to keep the classic feel of the game while updating the graphics. And it works.

The any% run, by Smelly_McTroll, with commentary by BOWIE the Hero, really showcases this game properly. The original Game Boy game had a huge glitch where you could wrong warp your character ahead in the game, cutting out nearly and hour of the adventure. That glitch was fixed in this version of the game, allowing viewers to really experience the game properly. Smelly puts in a great job playing through this, at times, pretty difficult speed game while BOWIE's commentary really highlights all the important details and nuances of this PS Vita release. 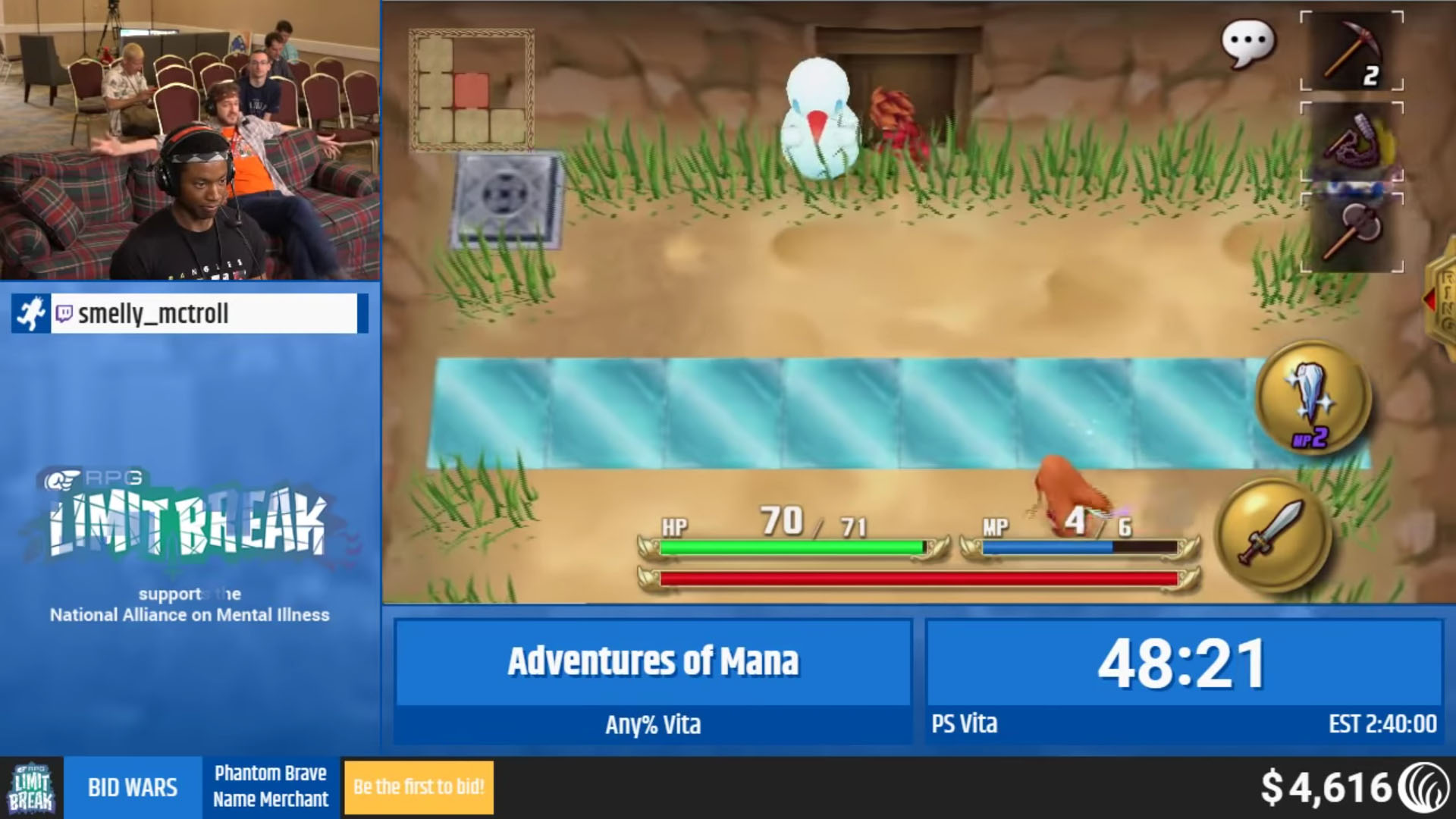 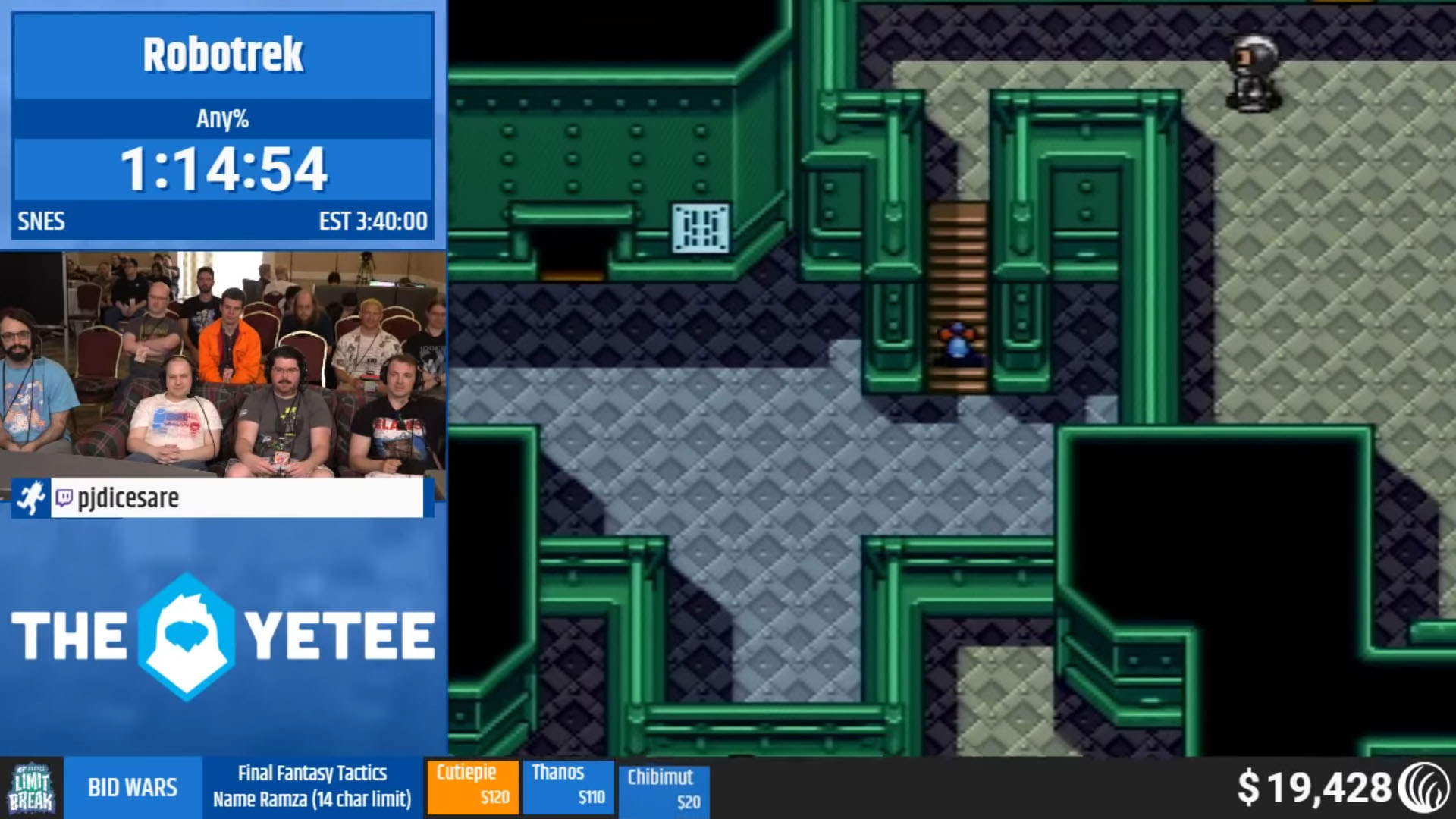 From there, the next awesome run was by PJ (a regularly runner at this marathon, beloved for his hilarious runs). His game of choice was Robotrek, a weird little gem on the SNES, and his any% run of the game is a great way to experience the goofiness of the game. Unlike other RPGs, Robotrek doesn't take itself at all seriously. IT delights in being weird, making strange references, and just having a good time. Plus, the game features an interesting robot-building mechanic and cool, turn-based battles. If you haven't seen the game before, this is certainly one to give a watch. It's not really like anything else released at the time.

I've played my fair share of tactical RPGs -- I'm a big fan of the Shining Force games -- but I will admit that the Final Fantasy Tactics games never hooked me. While they seemed fun (and certainly the any% run of the game from Claude was interesting), the games just didn't give me what I was looking for. I have, however, found my next tactical series to explore: Fire Emblem. That games seems to have everything I like about the genre without a lot of cruft. Plus, the all chapters run by kirbymastah of Fire Emblem 6 is a real showcase for speed-running The runner spent a lot of time figuring out how to set the RNG seeds, and he uses it to break the battles wide open. It's an odd run, but fun to watch, although good luck every getting a game as good as this when you play.

Dipping much further back in time, we have Curse of the Azure Bonds. This is a D&D-set tactical RPG, and it's really old and crappy and delightfully retro. I remember playing through one of the other games in this series, Eye of the Beholder, and I loved it then -- this any% NG run from MSKain really took me back. This game isn't much to look at, but the runner has fun playing it, and his commentary throughout and interesting and informative. Makes me want to bust out my copy of Beholder and give it another run-through.

Randomizers have become a big part of these marathons, and we had plenty of representation for two big titles in the genre. First came a standard flags race of Dragon Warrior Randomizer between sylverfyre and sparkover, which really showed how different the game is from normal randomizer. Although the most chaotic flags weren't on, the runners still had to navigate a fully randomized world map, with towns and dungeons scattered all over the new terrain. The levels gained, as far as stats and spells, were randomized as well, meaning the players didn't really know what they'd get or how long they'd have to grind for. It's a great run, and a closer race than anyone could have hoped for. 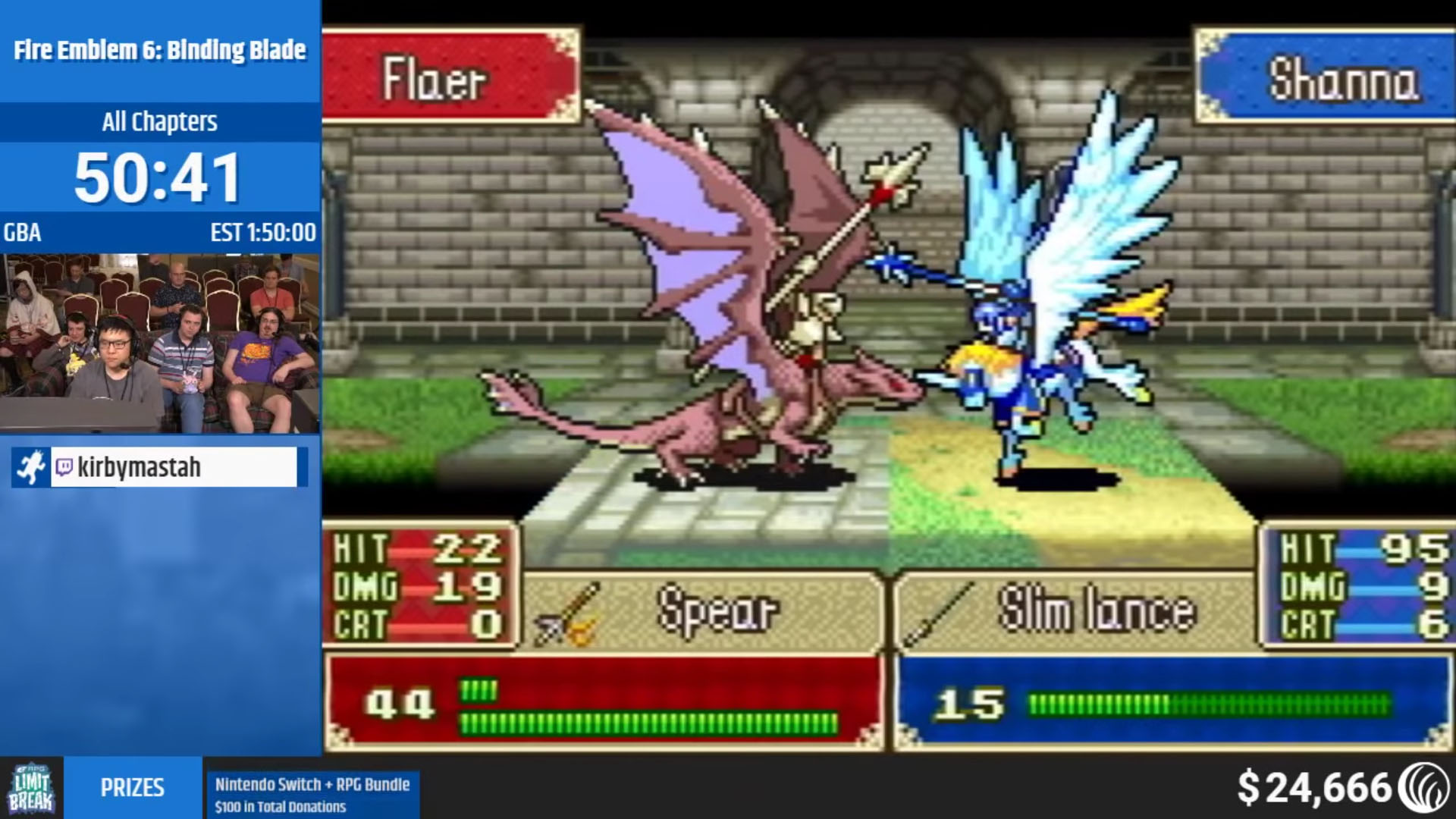 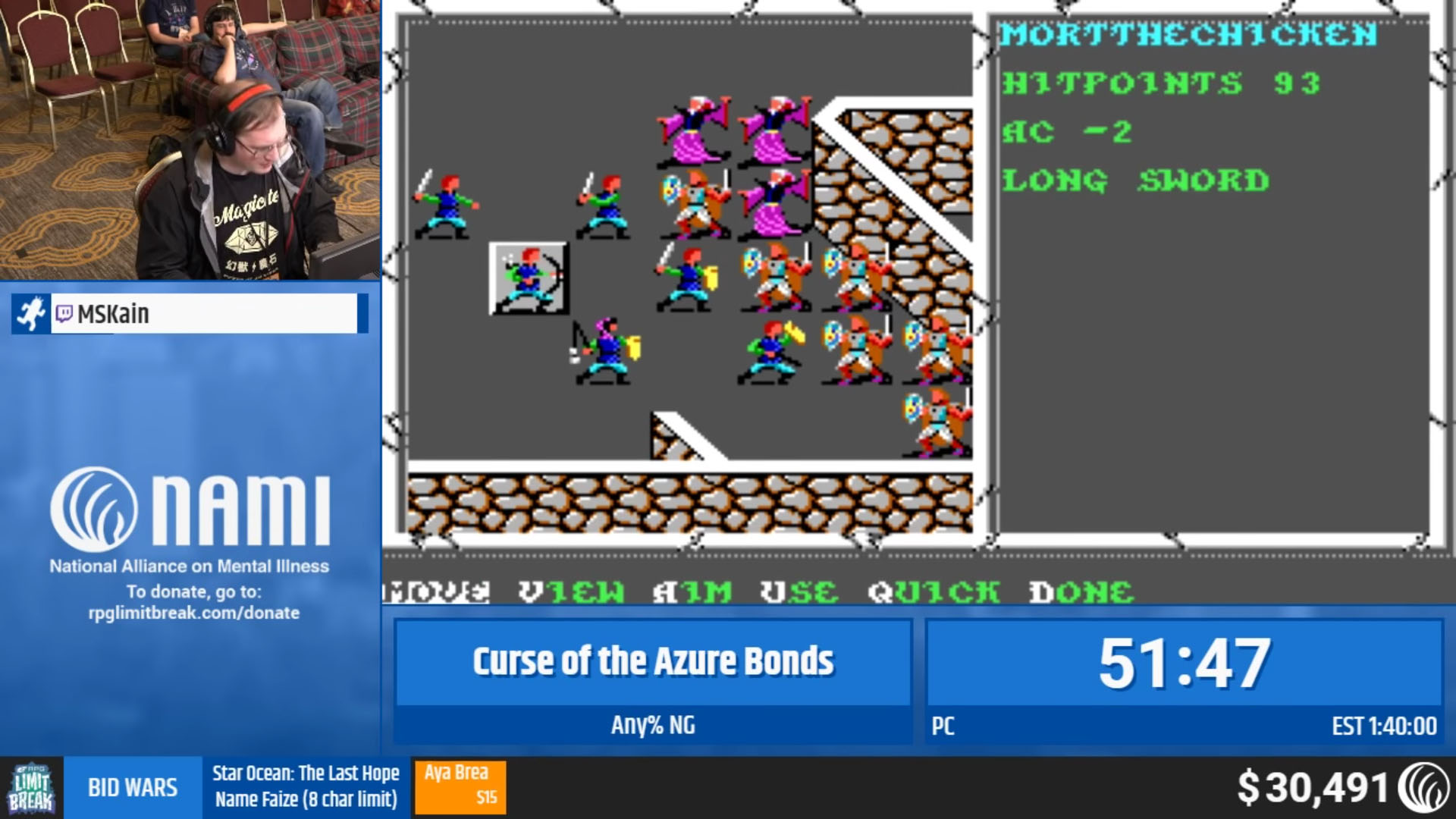 Following that, we had a showcase race of Final Fantasy IV: Free Enterprise, featuring the league forge% flags. The race between scratchdragon, SwimmyLionni, penguin8r, and Invenerable, was awesome and, again, highlights all that's great about this randomizer. The game takes the original FF4 and rebuilds it into an open world RPG, something very different from the original game. Watching these four runners battle through the game to find a true winner was a total blast.

And speaking of blasting through Final Fantasy, we had a TASBot Non Memory Corruption, No Reset run of the game featuring four white mages. Designed by The Axe Man and run by the TASBot of DwangoAC, this run took months to program all for an hour and twenty minutes of actual play time. But then, that's how a Tool Assisted Speedrun works -- the designer spends weeks and months finding the right RNG string so that the computer can take all the pre-programmed steps and play the game the same way over and over. Although I'm not normally a fan of TAS runs, I have to admit that seeing the TASBot destroy this original NES RPG with four of the weakest class in the game was absolutely awesome.

A little before these runs we were treated to an any% race of Quest RPG: Brian's Journey by Bingchang and Pa_Sama. For those that don't know, there was an awful RPG on the Nintendo 64 called Quest 64 and then, a couple of years later, an official enhanced "demake" of the game was released for the Game Boy Color. This version, Brian's Journey fixed a number of basic issues with the original game while also down-converting it to the portable system. I wouldn't say it's a great game, but the friendly race between these two runners helped to showcase this little known game and cast it in its best possible light.

Overall this was a great week of gaming. There were plenty of good runs with a number of lesser-known games highlighted. If any of these titles strike your fancy, please check out the complete archive of RPG Limit Break 2019 videos over on YouTube. And, of course, don't forget to support the National Alliance on Mental Health.

Meanwhile, the next big event for RPG players has already begun. The Final Fantasy V: Four Job Fiesta is a yearly event. In the traditional game of Final Fantasy V, the characters unlock the various jobs they get to use -- things like Fighter, Red Mage, Time Mage, Ranger, and the like -- as they explore the game and collect job crystals. Generally your characters are free to equip any job they like, training in those jobs to gain greater benefits. The Four Job Fiesta, though, changes that. Players are assigned four jobs they can play with, and they have to play with only those four jobs -- sure, they'll earn the other ones, but those are off-limits as per the rules of the event. It's a fun time, and one that requires a fair bit of strategy to navigate the game.

If that sounds like fun, you can join the event any time during the next three months. To participate all you have to do is make your donation to Child's Play through the Four Job Fiesta site, and then ping the FJF Twitter Bot to get your first job. All the rules of the event, and how to play, are listed on the site. 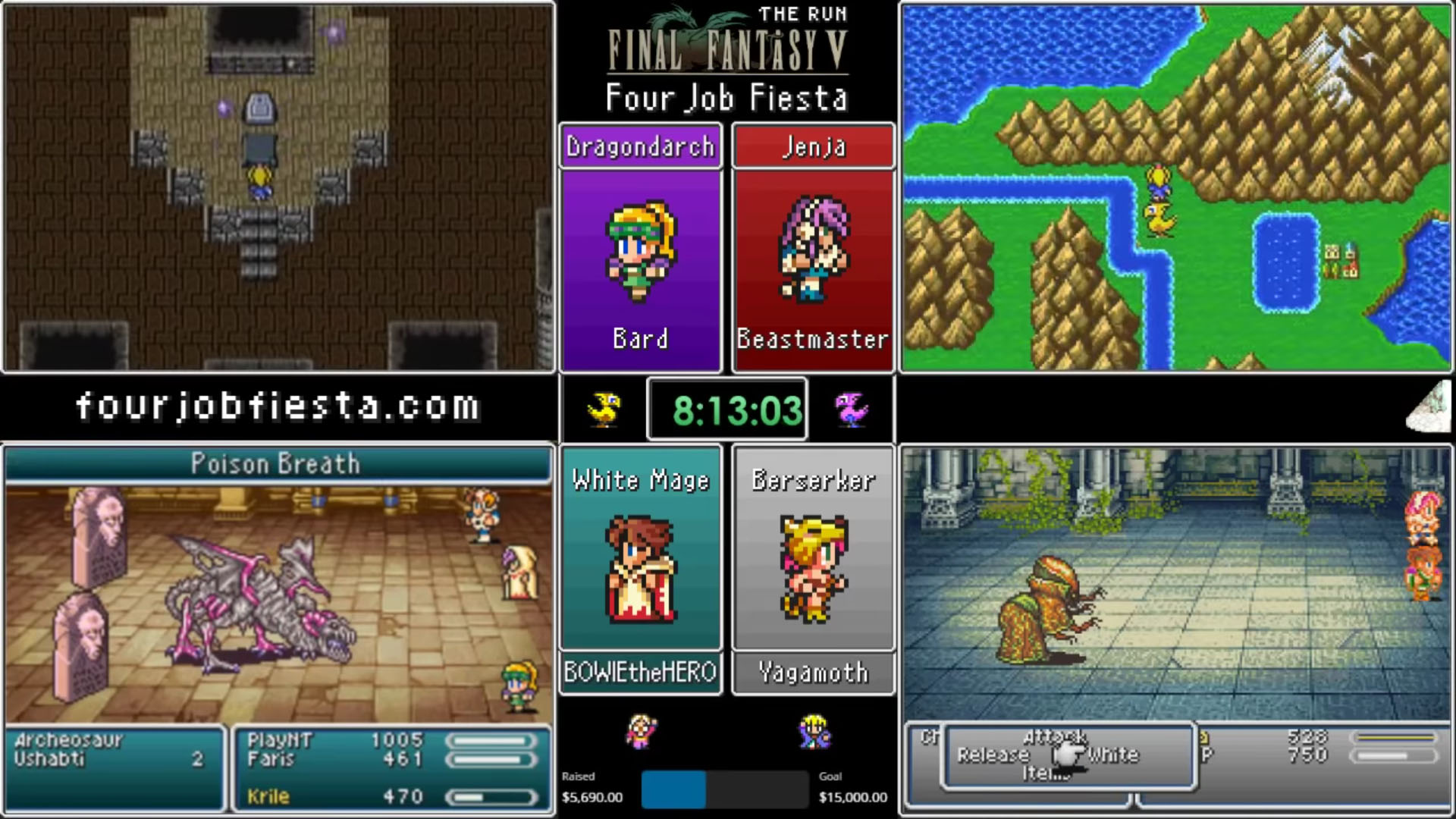 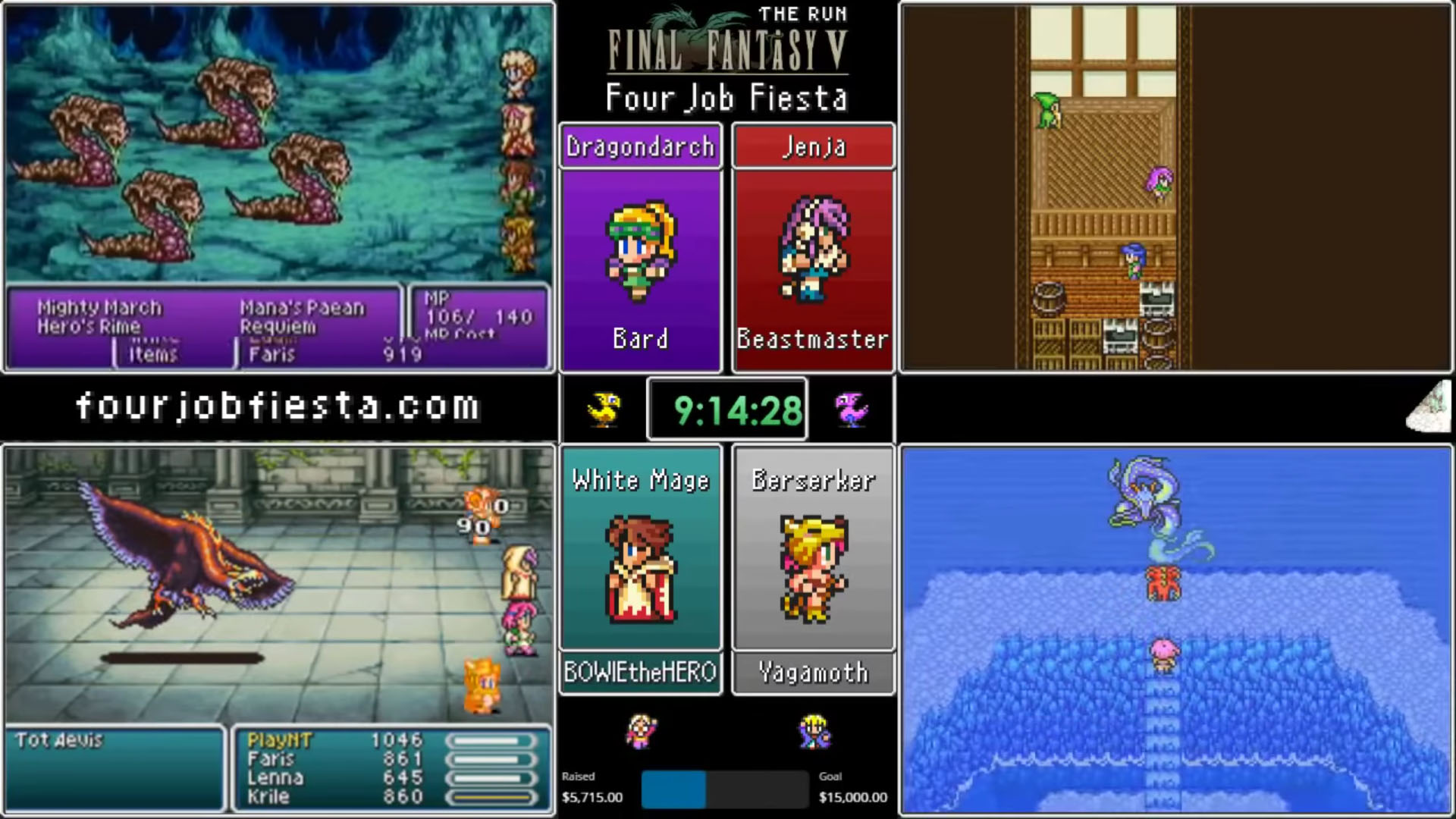 Plus, you can also watch this year's kick off race (part 1 and part 2) between DragonDarch, BOWIE the Hero, Jenja, and Yagamoth. This run featured four predetermined classes chosen by donations to the site -- White Mage, Berserker, Beastmaster, and Dragoon -- although because they'd already played this exact party two years ago, a fifth job was brought in mid-game (as per a rule-set on the main site), swapping Dragoon for Bard. This was a fun, lighthearted (and informative) race between friends and a great way to kick off the event. These runs are something I look forward to every year and I'm glad this one helped to carry on the fun tradition.

And note, if you are interested in seeing this race or any of the past ones, you can find them all on the RPG Limit Break 2019 YouTube channel.