Up and to the Right

Star Wars: Return of the Jedi

There is no doubt that Atari struck absolute gold with their arcade Star Wars. It married arcade game play with 3D graphics to give players the feeling they were in the cockpit of Skywalker's X-Wing (a feeling amplified if you played in one of the wrap-around cabinets). It was a fantastic that game that, even now, tops the charts of "best arcade games" for many reviewers. It's just a fun, fantastic adventure. 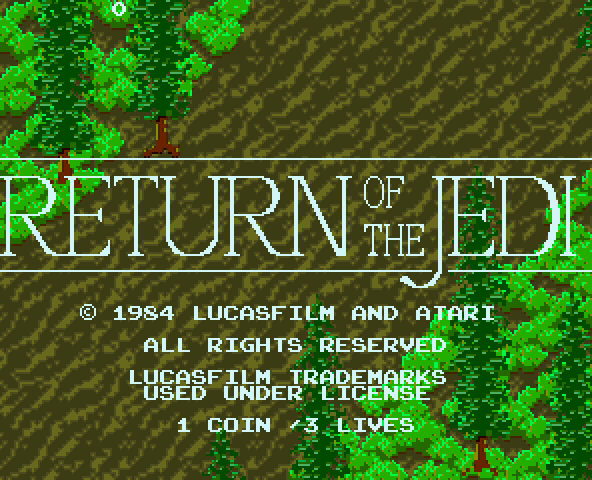 One year later Atari was back with another arcade title from the franchise. As Return of the Jedi in theaters the year prior, Atari skipped over The Empire Strikes Back (temporarily) and went right to a game adapting the hot new thing. Thus, Star Wars: Return of the Jedi: The Arcade Game was born... but, man, does it not live up to the legacy of its predecessor.

Like with the previous arcade adventure, the goal of Star Wars: Return of the Jedi is to guide your heroes through the final climactic battle of the film, blasting their way through foes until, at the end, the core of the Death Star is breached and the massive space base is destroyed. As before, the game is broken into phases. You start with Leia in the forests of Endor, guiding her speeder-bike through the trees while shooting (and bouncing) imperial speeders to their death. Then (in loop two and onwards) you guide Chewie in an AT-ST as he walks towards the base on Endor while, alternating into play, Han and two X-Wings fly across atmosphere above the planet, shooting at TIE-Fighters. Finally (in all loops), Lando guides the Millennium Falcon through the tunnel to the core of the Death Star, all before shooting the core and flying out to the exit. Then the game begins again.

It's a formula that works, for sure, giving players somewhat varied experiences with a lot of action. One key difference, though, is that this title uses pixel, raster graphics as opposed to vector art. It's an interesting choice considering how well the vector graphics went over with fans in the previous title. You don't get the feel like you're in the cockpit here; this feels much more like a basic video game, a standard pixel game like all the other pixel games around at the time.

I'd also argue that the raster graphics really aren't all the great. The various vehicles have barely any animation frames at all with only Chewie's AT-ST even really animating at all (beyond just floating up and down listlessly). The art also looks pretty rough. Characters aren't very identifiable and, in fact, all look pretty rough. While some consideration can be made for the technology at the time, even for chunky graphics they don't look that great. Arcades could crank out better than 8-bit graphics even back in 1983 and this game looks bad by those standards. 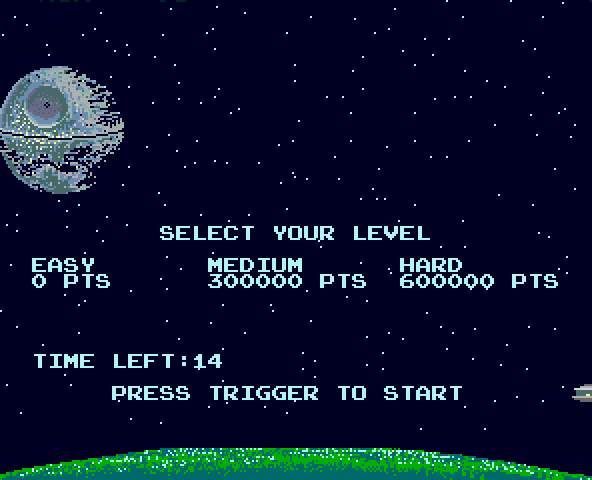 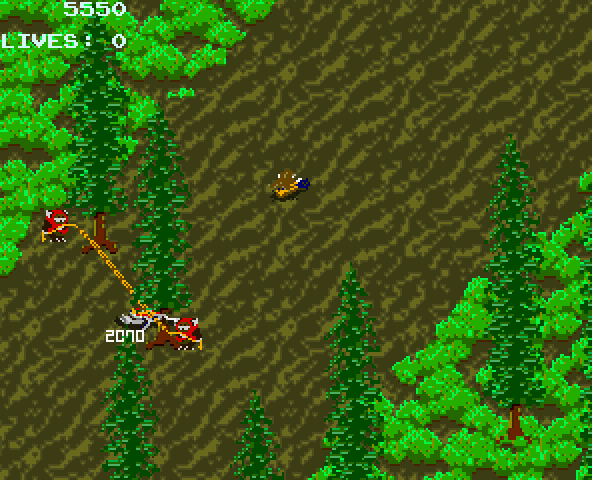 The audio clips, meanwhile, also aren't that great. The original game blasted clips of audio from the famous Death Star battle, sucking in players with sounds from the film. This game tries to do the same but the audio sound terrible. It's too grainy, with too much noise. Sometimes you can hardly tell who's saying the line. Often it's hard to understand what they're saying. The original game brought people in with the sound but this game's audio is bad enough I'd think it would have chased them away.

As far as game play, the title is... just fine. It's an isometric, belt-scrolling shooter. The on-rails experience on its own isn't bad -- the previous arcade title was an on-rails experience -- but the fact is that this game doesn't really manage to convey scope or speed with the way it's setup. Vehicles move at a sedate pace, failing to give you the vibe that you're really cruising along in any of these screens. The speed is fine for Chewie's AT-ST walker, which his supposed to be slow, but the speeder-bike and the Falcon ride are just way too slow. I'm sure that was done to make these sections playable but some kind of compromise had to be achievable.

I think of Battletoads and its "Turbo Tunnel" level. There the game was able to convey high speed but also layout obstacles you could see coming by having them blink on the edge of the screen before appearing for real. While I wouldn't want Return of the Jedi to have a challenge level anywhere near the Turbo Tunnel, that kind of speed is the expectation in a game such as this. Some compromise between speed and playability should have been the goal but this game misses the mark.

The shooting, meanwhile, is ho-hum at best. I frankly found I did just as well if I didn't bother shooting anything as I did when I actually tried. For the most part the enemies were even worse at dodging the obstacles than I was so, shooting or no, they didn't really matter to my play experience. All I had to do was avoid the obstacles (at a leisurely pace) and ride the ride where it took me. It was really simple, to be honest. 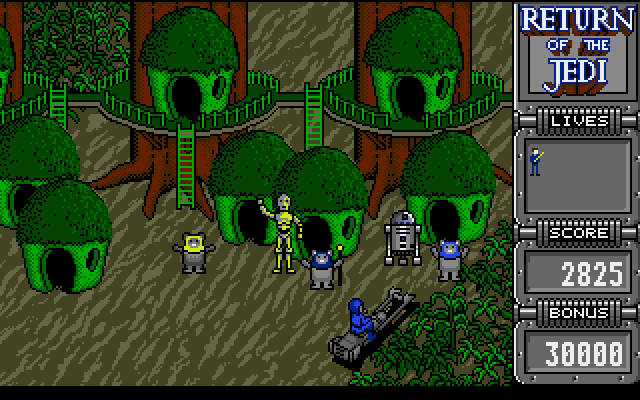 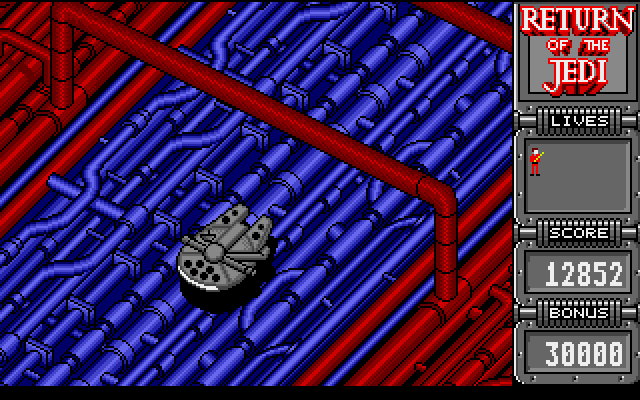 Now, yes, the game does up the challenge over time, adding in more and more obstacles on each loop all to kill you and get your quarter. That's expected for an arcade game, for sure. But frankly, once I'd played a couple of loops and saw all that the game had to offer, I was pretty bored. Dying at that point just saved me the trouble of having to see more and more loops. It, frankly, just wasn't worth my energy to care.

I like the idea of Star Wars: Return of the Jedi as an arcade game but I feel like the execution was lacking here. The game needed more polish, more time to tweak the elements and make the game more fun to play. Four modes of play on paper sounds great but, in practice, all it amounted to was four characters doing the same things with just a light change to the coat of paint. Once you scrolled vertically (at an angle) for a couple of minutes in this game, you've seen all you need to see. Then, likely, you'd head back to the Star Wars game, which was much more fun.