The Clones Are On the Move

I recognize that I already covered The Clone Wars once before; back during Sci-Fi Saga September we took a quick glance at the Top 5 Episodes of the series. While that first pass gave us an idea of what happened in the series while we were doing a run through the whole of the Star WarsThe modern blockbuster: it's a concept so commonplace now we don't even think about the fact that before the end of the 1970s, this kind of movie -- huge spectacles, big action, massive budgets -- wasn't really made. That all changed, though, with Star Wars, a series of films that were big on spectacle (and even bigger on profits). A hero's journey set against a sci-fi backdrop, nothing like this series had ever really been done before, and then Hollywood was never the same. saga, Disney+ has since announced a new season of The Clone Wars (along with a spin-off that joins characters from this series and Rebels), so it feels like we need to focus on this TV show more than before. 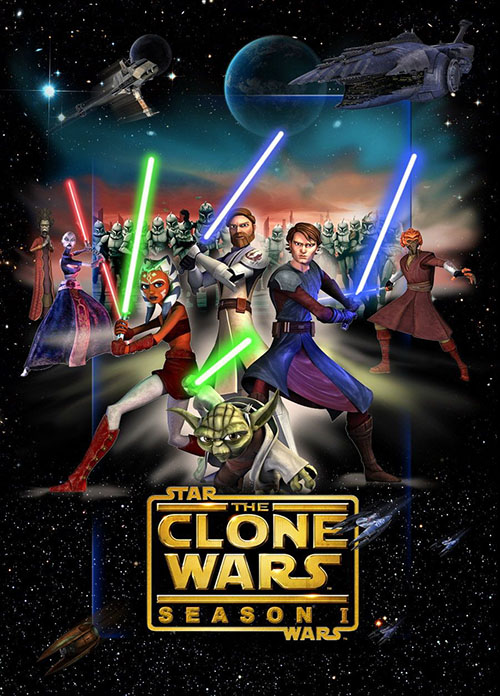 So, yes, we're going season by season through the show and that does mean we'll have to start with the beginning of the run (just after the movie, of course). And it is... quite a slog to get through, no mistake. I can see why this show got such a bad rap, something that was much harder to ascertain from the five episodes I watched a few months again; those episodes were a snapshot of the episodes fans liked best, but this first season is probably everything the fans liked the least. It's pretty awful, honestly.

Picking up after Episode II: Attack of the Clones (and the animated movie that launched this show), we join up with Anakin Skywalker, Obi-Wan Kenobi, Skywalker's Padawan Ashoka Tano, and all the clone soldiers that the Jedi now have at their disposal. Standing opposed to them are the Separatists, villains foes made up of the Sith, the Trade Federation, and their Droid legions. The war for the fate of the galaxy rages across every sector, with no life going untouched in one way or another, as these foes blast away. There are no clear winners or losers, not yet anyway, as the Clone Wars rage on.

This first season of the show is both very serialized and completely not serialized at the same time. Essentially, the season is a set of short stories, sometimes told within a single episode (such as in the fantastic, clone trooper-focused "Rookies") or across a set of two or three episodes (such as two duo where Anakin loses R2-D2 in a space battle, and then has to track him down, "Downfall of a Droid" and "Duel of the Droids"). While the episodes can connect to each other, though, very often events of one story won't carry over to the next set of stories. In a way it reminds me of the way Doctor Who used to present episodes way back in its original run, with episodes grouped into "stories", using multiple hours to tell a complete adventure).

I don't mind this storytelling style, for the most part, as it allows the show to bounce from one sector to the next after a tale is told. We might follow Anakin and Ashoka (who is really growing on me, I must admit) in one set of episodes, then let Obi-Wan take over for a spell, before everyone joins up for a third story down the line. It keeps the season moving at a brisk clip without any storyline lingering longer than it should. For the most part, two the three episodes is certainly the right length for the stories the show wanted to tell here. 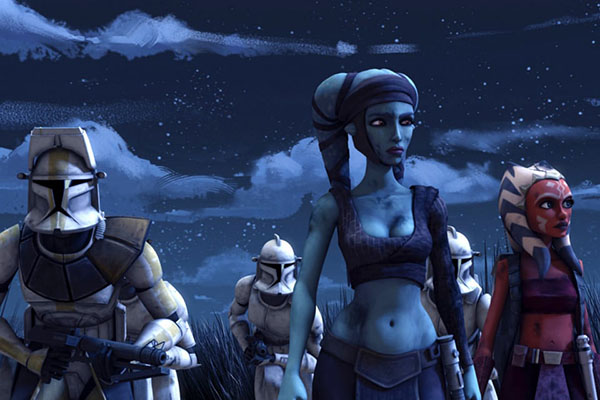 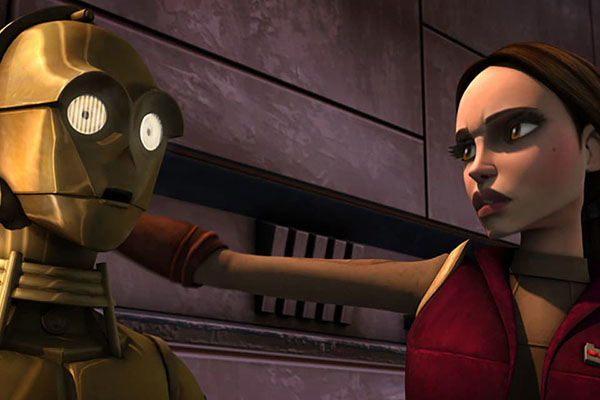 That's not to say the storytelling convention is an out-and-out winner, though. For starters there are some one-off episodes that could have really benefited from a little more time to breath. One in particular, "Trespass", is about a colonized moon, Pantora, claiming the seemingly desolate ice world of Orto Plutonia, the planet that the moon rotates, as their sovereign property despite the fact that a sentient species has just been discovered on the icy rock. What could be an interesting story here, one about political dynamics and sovereign reign, is reduced to a facile tale of a warlord gone made with a few skirmishes to break up the action. If this episode could have been treated with mature storytelling (as in an eye towards the politics, towards relatable characters, and with real stakes) this episode could have been a winner. It's just bad instead.

Compare this to "Storm Over Ryloth" (the first part of a larger story) where Ashoka is put in charge of a squadron of ship to lead a daring attack. This one has stakes for the mission while also giving Ashoka personal stakes. Essentially she has to learn how to trust herself as a leader even when it could mean putting her men at risk. It's a strong episode because it has time to breathe (especially since the rest of the Ryloth story is played out in later episodes). When The Clone Wars was allowed to tell its tales without distraction it was much strong for it.

That said, there were plenty of pointless distraction put in there because this is a show connected to the prequel trilogy. Take, for instance, the droid army. These are the same obnoxious "Roger Roger" droids we had to deal with in the movies and they're no more enjoyable here. If anything the droids with their stupid personalities (literally being the dumbest idiots I've ever seen in a show), put in simply to add "comedic relief", and nothing worthwhile to the show; they ruin most episodes they're in, only at their best when they're ignored completely. The same goes for the Gungans, especially Jar Jar who is given a number of episodes here to be his annoying self. C3P0 is also in many of these same episodes and he's just as obnoxious as ever.

But then these characters at least have more personality and depth than many of the other Separatists Count Dooku is the leader and he's the least interesting villain on the show, given to dark mumblings and vague pronouncements without any real strategy or plan to back them up. Dooku would be more interesting if we knew anything about him but the show never seems to want to fill his character in, to show why he became a Sith lord or what his final goal may be. He's one step above a nameless villain, basically, and the show is weaker for it. His apprentice, Ventris, is much more interesting (if only because she's given a scenery-chewing performance and got some character development in the original movie that launched this series), but even here she's little more than filler. Clone Wars has a villain problem, make no mistake. 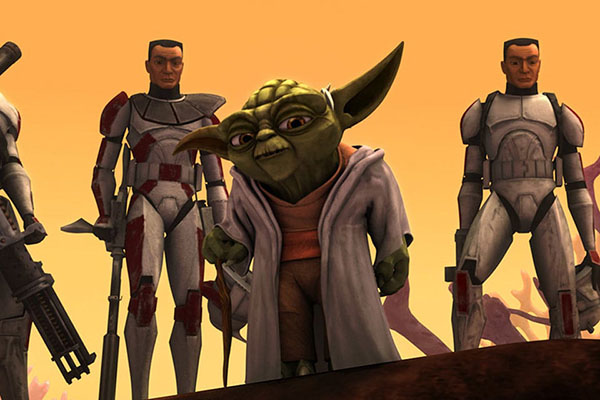 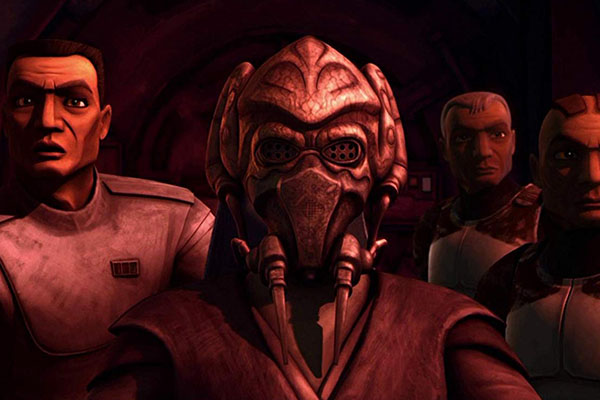 This speaks to the larger issue of this first season: there's no real nuance to the story. This first season puts all the emphasis on the heroes without paying much attention to the villains. Every villain we do get is some power-hungry, one-note character without any depth. Obviously we know the heroes are right and the villains are wrong, but we only know that because Star Wars has always been shallow in its storytelling: right versus wrong, light versus dark, good versus evil. In the movies, and here in this show, everything is painted with a broad brush so every character maintains this same shallow veneer. If you're a Jedi, if you're with the Republic, you're a good guy; if you're a Sith, if you're with the Separatists, you're a bad guy. A little more time spent with the villains, a few episodes dedicated to their side of the war, would go a long way to coloring in all the factions at play.

Of course we also have to look at where this series is headed: with the Jedi order collapsing and the Sith triumphant under the banner of Emperor Palpatine. Nothing here, yet, hints at that storyline to come, almost as if the series is trying to ignore where it has to go. This show doesn't get to reinvent the future and it can't pretend everything is going to fall apart after Episode III: Revenge of the Sith (although if it eventually did that would be a very bold move). All the time spent with the Jedi, the character development given to Anakin and Ashoka, isn't going to change everything that's going to come. The series pretending that isn't the outcome, giving us a war without even a hint of the eventuality we've already seen, actually weakens the series. Eventually we'll get some of that development (I know because the Top 5 episodes showed me that), but we're lacking any of that development here.

Season 1 of The Clone Wars suffers most because it's a show clearly meant for kids set during one of the darkest portions of the Saga and yet it pretends like everything is just fine. It's a shallow season of storytelling that, sometimes, hits the right chord and manages to put together really good episodes. Those tales, though, are few and far between leaving this first year of the show as a wasted effort. Here's hoping the series eventually gets its feet and tells really stories worth watching.