I'm sure the Star WarsThe modern blockbuster: it's a concept so commonplace now we don't even think about the fact that before the end of the 1970s, this kind of movie -- huge spectacles, big action, massive budgets -- wasn't really made. That all changed, though, with Star Wars, a series of films that were big on spectacle (and even bigger on profits). A hero's journey set against a sci-fi backdrop, nothing like this series had ever really been done before, and then Hollywood was never the same. couldn't have been cheap to get. For Parker Brothers it had to seem like a big win: one of the hottest properties licensed for a Billion dollar market, and it was all theirs. Sure, Atari snagged the Arcade rights to the franchise, but even those ports had to go through Parker Brothers when the games came to home consoles. And they got it at the right time, just before the big conclusion to the trilogy, Return of the Jedi, came out. They could have games for the epic finale just as soon as kids wanted them. 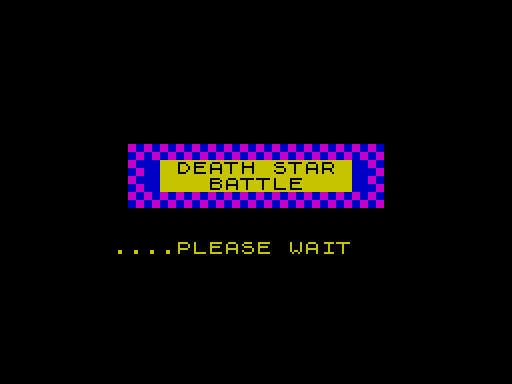 The thing is, though, that the games Parker Brothers put out never felt all that special. Sure, there's playability to their Hoth battle in the The Empire Strikes Back game, and they down-conversion of Star Wars arcade game was commendable, if not all that interesting. But as games like Jedi Arena illustrated, each of these titles had a very basic, cash-in feel to them. Parker Brothers wanted their money and it didn't really matter how quick and dirty and cheap the games really were.

Star Wars: Return of the Jedi - Death Star Battle is another quick and dirty game from the company that does just enough right to not feel like absolute shovelware. But it also doesn't really provide a deep or interesting experience. It's commendable for the fact that it doesn't completely suck, and at least provides two mode of play in one cart. But once you've put in a few minutes on the title you'll have seen all you need, and that's before you figure out how to cheese it completely. Death Star Battle is competent for the era it came out in but I'd hardly call it "fun".

In the game you pilot the Millennium Falcon (we assume as Han Solo although he neither appears in the game, nor on the cover art) at the end of Return of the Jedi. You start at the bottom of the screen below a protective shield (presumably the one the Ewoks are working to take down). Waves of TIE-Fighters and other ships fly past, taking pot-shots at you while you get to shoot at them. Over time a hole will open in the shield and your goal is to time it right and fly up through the shield to the top half of the game.

From there the game warps you into hyperlight before giving you an expanded view of the top side. Here the Death Star II is being built one small brick at a time. As more waves of ships fly past your goal is to blast away the bricks of the ship, blowing open a path to the glowing core of the Not-a-Moon. Beware, though, as the powerful Death Star laser is constantly moving around to try and shoot you. Hit the core, and avoid all the attacks (and counter-measures) from the ship and you get to watch the Death Star II explode in all it's pixelated glory. Then you get to do it all again.

When reviewing the other games on the Atari so far I've noted that the best of the set are the one that provide more than one mechanic. The Hoth Battle in Empire, for example, is decent but all you do is shoot AT-ATs, making for a very limited experience. I liked what Atari did with their arcade game a lot more, giving you three different modes to play through before the game loops. Death Star Battle pulls off a similar trick, with two portions of the game and different mechanics to dig into. It works well enough, and I appreciate the effort. Still, the whole of the game feels a little short.

Of the two sides, the starting phase is the weakest. It's pretty easy to avoid the ships that are coming along, and while you can shoot at them I'd hardly call it necessary. Certainly once the holes start opening in the force field all you need to do is fly into one of them, all considerations about other ships and causing fiery carnage lost. Sure, if you wanna go for points you can do that, but high score keeping doesn't really matter when your score is lost the second you turn off the console.

The actual battle with the Death Star II is far more varied and complex by comparison. here you have multiple things you need to avoid, depending on your position on the screen. Go too high and you have to avoid the bricks flying in for the Death Star. Too low and you have those ships flying in that want to crash into you. And any time you're below the Death Star, plinking away at it, you have the worry about the Death Star laser shooting you in the face. It's a lot of balance and, on a casual play of the game, it can seem pretty frenetic.

With that being said, there are ways to cheese the game. For starters your ship can fly, and shoot, in any direction. You aren't limited to horizontal or vertical shots meaning you can take out the other ships, and the bricks of the Death Star II, from any angle. That's useful, especially once you realize the Death Star Laser can only come at you from the width of the main ship, and only at a straight-down angle. The easiest way to defeat it, then, is to flay to the side, angle your ship, and blast away at the core from a 33 degree angle. Yes, you still have to avoid the ships that might crash into you but all the other objects on screen are out of sight and mind.

I like the Centipede-esque game play of this section, especially once you realize you can fire in any direction (and fly back and forth across the sides of the screen too, which adds in a bit of Asteroids to the design as well. The game has a lot of neat ideas in it and it can be fun to tool around for a time shooting at things. I think on that front the game really nails its goal. But as far as providing that perfect experience there's still a piece missing somehow.

If you're below the Death Star II when it blows you'll be auto-killed, which sucks. I think instead of a simple cop-out death the game should have had a third tier to its design. You should have been forced to fly the Falcon out of the wave of destruction, avoiding debris (like in Asteroids) before reaching the finish. One more little sequence could have added some length to this game and made the overall package much more complete. Anything to make this game last more than a couple of minutes, start to finish, would be ideal.

Sure, the game loops, like most Atari titles, but just doing the same things all over again is hardly the same as lengthy, interesting game play. Released, as it was, three years after Adventure, it's pretty clear how a game like this could add a length, substantive adventure in. This game doesn't do that; it's mechanically strong but hardly the most compelling experience, even on the Atari 2600 (or Sinclair Spectrum, or whatever console you had at the time). It's not bad but it just needed a little more.

Still, when you compare it to some of the other shovelware out for the system at the time this was pretty playable (looking at you, Jedi Arena). It's is a fine, serviceable game that came out at the right time to provide some small sliver of the Return of the Jedi experience on home consoles. Back in the day, perhaps that was enough.