A Return to Arcade Fun

Star Wars: The Empire Strikes Back

For arcade fans back in the 1980s there might not have been a bigger disappointment than Star Wars: Return of the Jedi. This second adventure from Atari had to follow up the fantastic vector-based Star Wars and, well, it failed on every count. It wasn't as fun, it wasn't as interesting, and it lost the vector-based graphics that allowed the game to put you "in the cockpit" for the adventure. It short is just wasn't what fans were looking for as a follow-up to the sublime Star Wars. 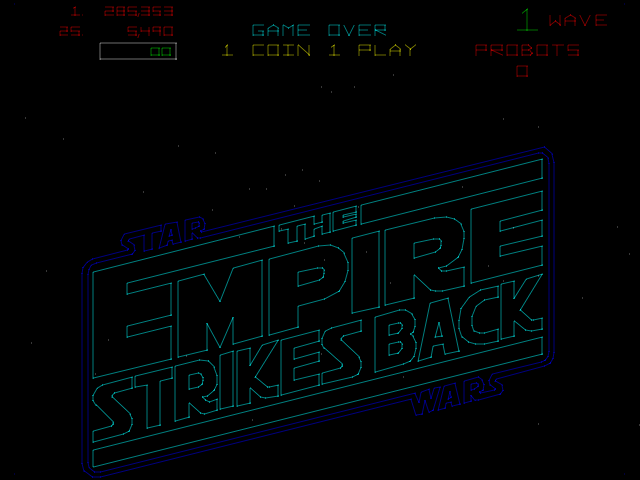 Now, in fairness to the The Return of the Jedi game, I'm sure the creatives behind it wanted to do something different, not imply kick out the same game all over again. However, that game clearly didn't hit with the fans the way Atari would have liked. Thus, for the third title in the series, an adaptation of The Empire Strikes Back, the company had its creatives go back to the first game and "just make it all over again." Empire has the same vector graphics, the same kind of game play, and more of everything fans wanted. It does, however, feel just a little empty by comparison.

Built as a conversion board for the original arcade title, Star Wars: The Empire Strikes Back is another vector-based cockpit adventure. The game follows the events of the Battle of Hoth (and the aftermath). The first act is a two-part adventure across Hoth itself. There you play as Luke, flying his snow-speeder. His first goal is to take out probots (probe robots) that are flying around Hoth, scanning for the rebel base. You have to survive this way to then get to the the battle against the AT-ATs. You can blast these in their cockpits, or shoot tow cables at their legs, to take them down, earning points and pushing the adventure forward.

After this act the game then transitions into the flight of the Millennium Falcon. Now acting as Han, the player has the blast their way past waves of TIE-fighters as these ships try to take out the Falcon. Once the player has survived this onslaught the ship then heads into an asteroid field. Here the player just has to survive, guiding their ship (via the reticule) to avoid the asteroids and make it through to the end. complete all four parts of the game and you get a score bonus before getting sent back to the start of the first act, on Hoth, to do it all again.

In construction this game delivers everything fans wanted. The style of the first game is maintained with an adventure that puts you right into the 3D action. You're blasting and shooting while guiding your ship through the on-rails adventure, racking up points and (excuse the pun) having a blast. There is a solid thrill to shooting foes in this 3D setting and this game doesn't screw around with that too much. If you liked the action of the original Star Wars arcade game then this will feel properly familiar and fun for you as well. 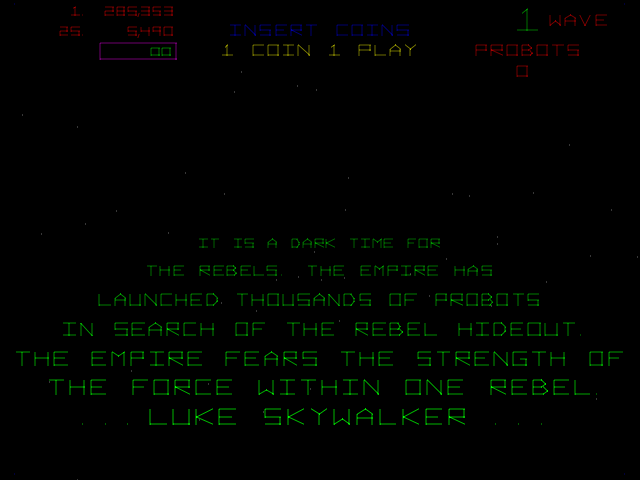 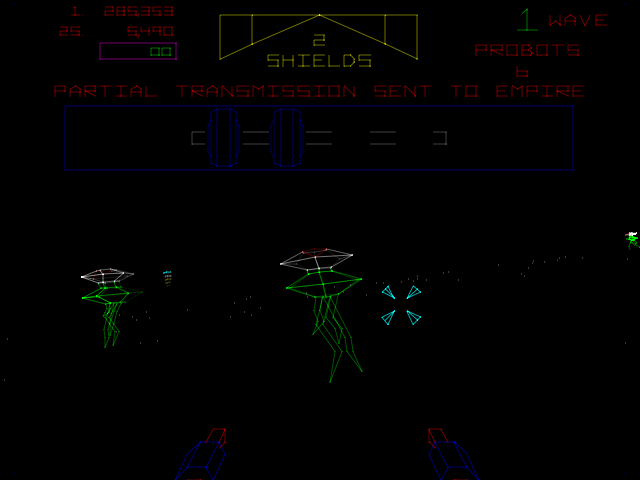 The game does add a few upgrades to everything to at least not feel like exactly the same adventure. Each act has a goal -- shoot enough droids, kill enough walkers, take out enough TIEs, avoid the asteroids -- and if you do that you get one of the JEDI letters. Collect them all in a play-through and you'll get a huge score bonus. Arcade games back in the day were all about the score over just seeing a game to completion (which makes sense when adventure like this might have only lasted three minutes per loop) so cool new ways to pump your score, and make it onto the leader board, were appreciated.

The graphics also saw an upgrade, with the vector objects being more detailed. On this front I'd argue it's only by degrees as everything is still rendered in the same wire-frame style. Yes, there are more wire-frames on screen, with more particle effects drawn out, but I struggled to think it really looked "better". For my eyes it just looked more "busy", but hey, some fans really did seem to like the upgrade for the graphics on this iteration of the game so we can't discount that completely.

Thing is, though, that I feel like what the creators wanted to do here wasn't all that well served by the vector graphics. The game is colored lines on black, just like the first game, and while that works well for an adventure in space -- the Death Star battle of the first game, the space sequences here -- it doesn't work as well for any planet-bound sequence. Hoth doesn't really feel like Hoth, lacking body and substance. You're just flying through an inky blackness that is supposed to represent Hoth without really giving us any landscape to grab hold of. It's too empty to feel like Hoth.

And frankly the hook of this game isn't nearly as interesting as in the first adventure. There we were on the one climactic mission, the big damn hero venturing out to destroy the Death Star. That's a hook to the story if ever I saw one and it really made you feel like you were battling the Empire for the fate of the galaxy. Here, though, all the sequences of the film are about surviving. We don't have some big mission to head towards here like we had with the Death Star battle. This is problem with adapting Empire, of course, because that film doesn't have a big ship that gets blown up at the end of its adventure, but I wish something could have been devised. 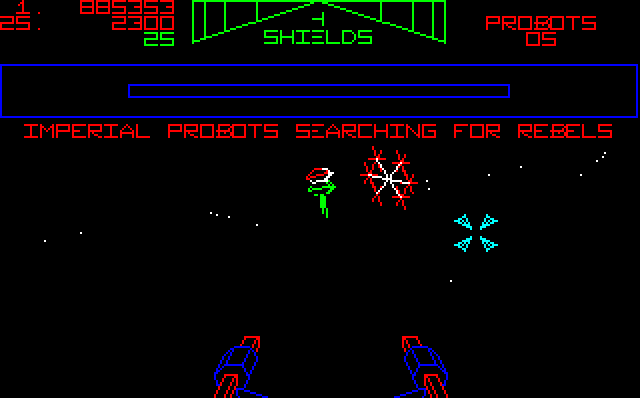 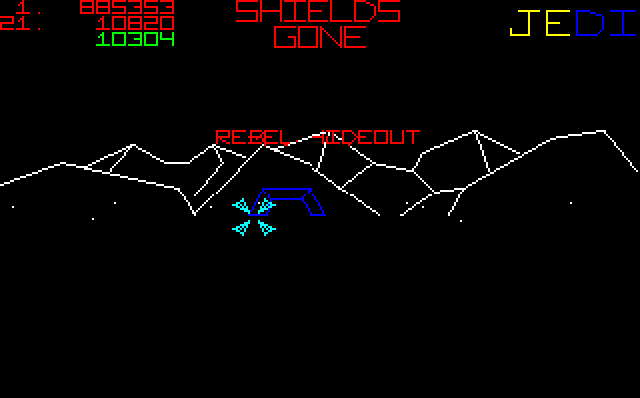 Sure, we can't blow up the Death Star but what if, instead, the Falcon had to fly through the asteroids first before battling TIEs through clouds to reach the stranded Luke hanging at the bottom of Cloud City. Then, at least, it feels like we've reached a goal and accomplished something. This game doesn't really give us that hook which means the loop just feels empty and a little pointless. I want more and the creators just didn't deliver in that regard.

Star Wars: The Empire Strikes Back is a solid, competent game that takes the original engine and creates new acts for the player to run through. It accomplishes this goal, on a budget no less (being an arcade conversion that worked in the original machine). But as far as giving us new experiences, or even just building properly on what we had before, this title feels like a bit of a missed opportunity. Its good, but I was really hoping for great.