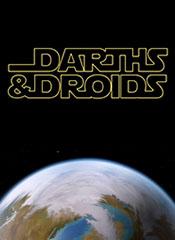 Darths and Droids is a Web comic about a group of friends playing a roleplaying game (RPG) set in the Star Wars universe. However, the players in the comic have never heard of Star Wars. That's right. No wookies. No Death Star. No lightsabers. Some of you may be familiar with this concept, as it was successfully done in DM of the Ring.

The only person who knows what is going on is the Game Master (GM), who is "creating" the Star Wars universe for the players by describing things like Jedi and droids. Of course, the wise-ass players are a bit confused, so they misunderstand the GM and point out every flaw in Star Wars. The comic uses still frames from the movies in a collage with word balloons. What we see are the player characters (PCs) that the players control.

Everyone listening? Here's the campaign intro.

For those unfamiliar to RPGs, let me describe it in movie terms. The players are the actors themselves, the PCs are the role they play in the movie, and the GM is the director who describes the villians, extras, and sets.

The comic follows the movies chronologically, but the dialogue between the players and the GM change the plot of the movie dramatically. Qui-Gon Jinn is the wise, even-tempered Jedi Master, but in Darths and Droids, the player has him make irrational decisions and jump into every fight without thinking. Half the fun of the comic is watching how the Star Wars fans behind Darths and Droids re-imagine the franchise they obviously love.

I have a bad feeling about this...

Growing up, I never had a group of people that played RPGs, so I was unfamiliar with a lot of the quirks. Thankfully, the creators provide a commentary after each comic that gives explanations (with helpful links) or behind-the-scenes tidbits that make the jokes accessible to readers that aren't as familiar with RPGs.

Shut up. He'll take away our laser swords!

Watching the PCs blunder through what is possibly my favorite sci-fi franchise has been one of the most entertaining things I've seen in a long time. The creators poke fun at the absurd actions of PCs and put a fresh spin on the Star Wars movies.

Reading this comic through the first time, I was compelled to power straight through to the end. But when I read through the comic again, I was surprised to find myself enjoying the subtle plot twists that the GM weaves throughout the story. In this comic, as well as in playing RPGs, the joy is in the journey, not the destination. Too bad the PCs always screw it up.

Overall, reading this web comic is a great way to be entertained and learn a bit of RPG sociology at the same time. Darths and Droids made me laugh out loud without having to deal with 3 a.m. Gamer Funk. That's a win-win in my book.