If This is What Training is Like, I Don't Wanna Be a Jedi

Kids back in the 1980s wanted to be a Jedi. Okay, we can remove the qualifying year: kids want to be Jedis. As soon as they see those space wizards walking around with their laser swords and magic powers, kids suddenly see what they've been aspiring to all along. If it were possible to really be a Jedi, every kid would spend a few years putting down "Jedi" whenever they were asked, "what do you want to be when you grow up." Occasionally you'd get a Sith too, but magic powers are magic powers. 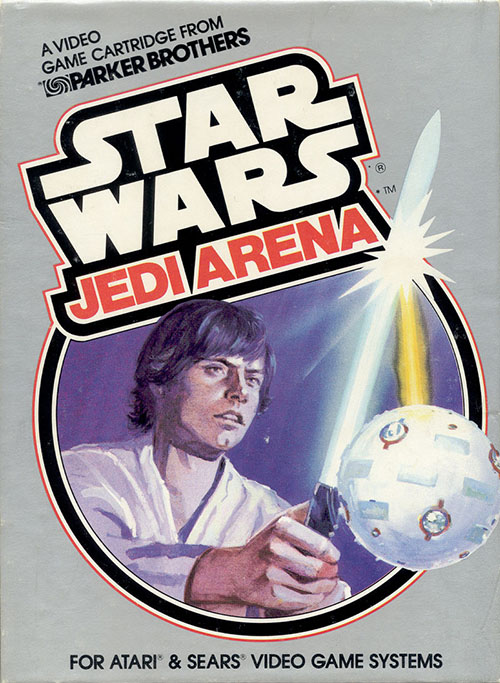 To that end, Parker Bros. attempted to kid video game console owning kids of the 1980s a taste of what it would be like to be a Jedi, although more accurately the company shit out a terrible breakout clone that managed to let kids live the drudgery of constant training without any of the fun. Star Wars: Jedi Arena could have been a fun game that let kids live out their dreams of being a Jedi. Instead it's a cheap cash-in that wastes time while Parker Bros. worked on another game for later release.

Published in 1983 (and conspicuously released only on the Atari 2600 and never ported to anything else afterwards), Star Wars: Jedi Arena is best described as a follow up to Pong or Breakout. One player sits at the end of each side of the screen, their Jedi holding their lightsabers out while a little training droid floats back and forth in the middle. The droid will, randomly, shoot out lightning at each of the *edi and the players are meant to flap around their lightsabers to block the lightning. If they fail, the lightning hits their force shields and a small part of it is destroyed.

You can see how the game is supposed to be played from here. The players have to block the lightning while the droid slowly whittles away at their shields. Once four small blocks are removed from a section of the shield (Breakout-style), the *edi is left defenseless. The next lightning bolt that strikes at just that area will damage the *edi, sending the round point to the other player. And then the *edi switch sides, refill their shields, and the round begins anew.

The issues with the game are self-evident and reveal themselves almost instantly. For starters, the *edi are fixed in place. While the ball moves back and forth the *edi have to sit there and wait to see where the lightning goes. Instead of an engaging game where the lightsabers (and even the *edi) move around the anticipate (or flee from) the damage of the orb their pace of the game is downright sedate. You sit, you wait, and you aim your lightsabers at the orb to hope the lightning hit the blades and doesn't go randomly off to the side.

The ball also can't be hit. It floats in the middle, back and forth, just out of reach of the players. If maybe the *edi could hit the ball at each other, encouraging lightning discharge against the other player in the process, that could have made for a much more lively activity. Everything, though, is out of the control of the player other than the lightsabers, removing any sense of urgency or activity from the actual game. You just sit there and flop your blades around, hoping its good enough.

Even that one activity, though, won't necessarily win you the game, though, because of the randomness of the title. The lightning that discharges from the droid has a tendency to go skittering off at random angles. Technically the droid spits it back and forth (before charging up and shooting lightning at both players simultaneously for a few seconds), but even if you track the droid with your saber there's no guarantee you'll block its shots. You'll do better than if you just set the controller down, although not by much. Everything is so random there really is no skill to blocking the shots.

It's honestly fair to say there's no skill involved in playing this game at all. You have one activity, moving your lightsaber, and nothing to do with the button on your joystick. Anything could have made this more interesting. A bit of force push you could use to send the orb back and forth between players, or the ability to actively attack the orb, or just about anything you can think of to assign an action to that unused button. Anything would be more interesting than this.

To the game's credit it does have a very lively set of sound effects. Your lightsabers thrum while the lightning crackles from the droid. There's the jaunty Star Wars jingle that plays when you load up. It had a very lively sound collection that draw you in for a few seconds before you realize the game you're playing. It might sound good but it neither looks nice nor plays well. It just exists to steal a few dollars from kids until the next Star Wars game came out (the very next year, in fact, in 1984).

Star Wars: *edi Arena is a cosmic misfire (if you'll forgive the pun). It's possible the Atari 2600 was too limited for the idea the programmer, Rex Bradford, had in mind. More likely, though, is that Parker Bros. rushed this out to meet demand, like so much other shovelware spit out for the Atari 2600 as it lurched through the first big video game crash. It's games like that made players shy away from video games. *edi Arena is crap, made worse bu the Star Wars license attached to it.