Use the Force, Luke!

When Star Wars: The Empire Strikes Back landed on the Atari 2600 in 1982 (and then a year later on the Intellivision) it had to feel, for many kids, like they were finally able to live out their big Star WarsThe modern blockbuster: it's a concept so commonplace now we don't even think about the fact that before the end of the 1970s, this kind of movie -- huge spectacles, big action, massive budgets -- wasn't really made. That all changed, though, with Star Wars, a series of films that were big on spectacle (and even bigger on profits). A hero's journey set against a sci-fi backdrop, nothing like this series had ever really been done before, and then Hollywood was never the same. fantasies. it let you jump in the cockpit of Luke's snow-speeder as he ventured out in one of the most iconic fights of the (so-to-be) trilogy. However, that home game wouldn't only be the first salvo as many, many ore games were soon to come for the franchise. A year after Parker Bros. proved they could deliver grand, Star Wars action on the tiny console, Atari came out swinging in arcades, and they delivered what is considered one of the best games in the franchise. 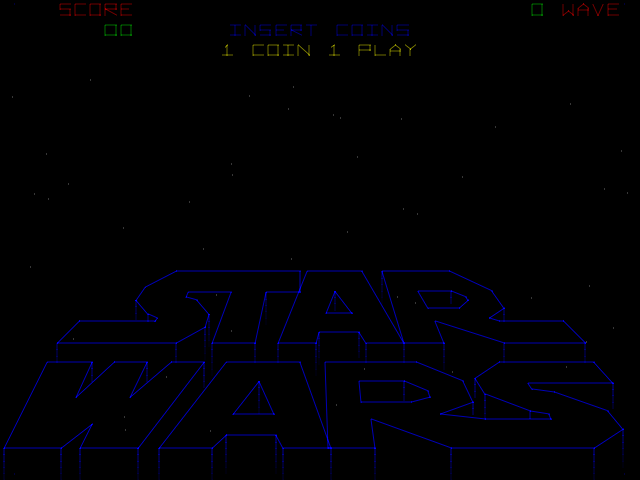 If there's any moment more iconic than the snow battle of Hoth then it's probably the epic "trench run" at the end of the original movie. We all know how that goes: Luke gets into his X-Wing, flies to the Death Star, and then battles turrets on the surface of the "not a moon" as explosions happen all around him. Once he gets to the trench along the center of the Death Star he flies in and lines up a show into the exhaust port, blowing up the star base. He delivers a mighty blow to the Empire (and Darth Vader goes spinning off in his TIE-Advanced with egg on his helmet). That's the moment every kid wanted to relive.

With Atari's Star Wars arcade game (often referred to as Star Wars: The Arcade Game), kids could very much relive that great sequence. For the arcade game Atari pulled together quite a feat of hardware, especially for 1983. Using vector graphics the programmers managed to create a real, 3D approximation of the famous sequence. You get to fly Luke to the star base while voice clips and plinky music sets the scene. Then you really do fly down into the trench, shot at gunners, and then fire off two missiles into the exhaust port to win one for the Rebels! It's pretty slick.

When you play it you can get pretty lost in the experience. The game is an on-rails shooter so you never really get to fly very far off course, keeping the reins in tight on the player. That's okay, though, as there's still plenty of action to be had as you fly around and shoot. The game runs through three phases per act (although the first act is only two phases). You fly in, shooting at TIEs as you work your way towards the Death Star (and, in the arcade experience, your ship flies around in a big loop, giving you a really vertiginous experience). Then you get to the base and have to fly along the surface, shooting at turrets and missiles fired at you. Then its down into the trench where you fire at more turrets while dodging horizontal pylons, all before firing off that fateful shot. And then you start at the beginning and do it again, only harder.

As an arcade experience, Star Wars was meant to be a quarter-munching game. The first round, which will take players about two minutes to work through, sets the stage, with the flight in and then the trench run. It's on the second loop that the game gets hard and puts up just enough challenge to kill you quick. Most players would get three to five minutes of solid game play before they had to chunk in another quarter and do it all again. But you got to do the trench run, so it absolutely was worth it. 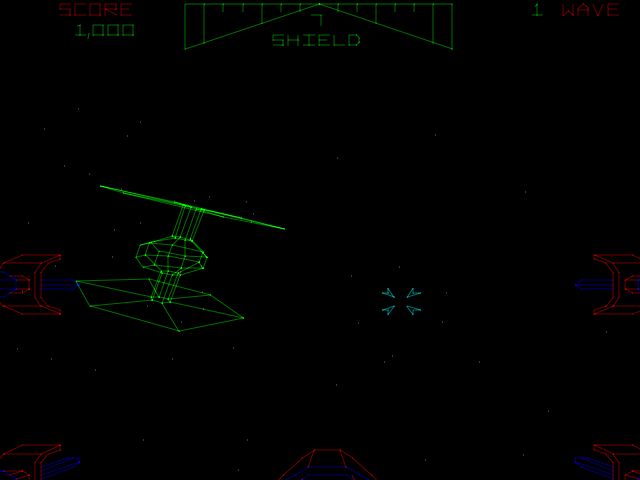 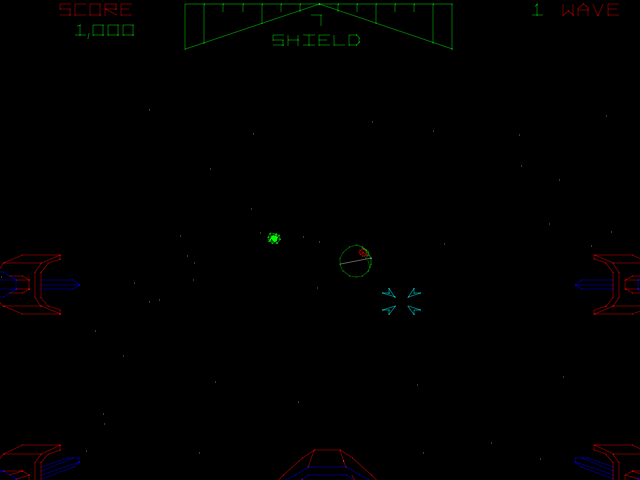 I think that's a brilliant move on the part of the programmers: the pace of the game was just fast enough that, with only a modicum of skill, every player got to run the trench at least once. They might not survive long in the second loop after that, but for a quarter you got to live out your ,uke Skywalker fantasy at least once, and that was a big deal. Everyone got to be ,uke for 25 cents; so what if you died after? You got to defeat the Empire once and be the big damn hero.

Of course, like any good arcade game players could keep going, playing through act after act of the Death Star battle, trying for more and more points. You wanted to be the one to Knock OBI, WAN, and HAN from the top of the High-Score list, but that meant getting good at your star-fighting, Jedi. And that would take a lot of quarters, perfect for any arcade owner looking to turn a tidy profit on this licensed game.

While the colors were a little weird, with bright greens, blues, purples, and reds making up the primary palette, it actually works within the structure of the game. The vector graphics were drawn lines against a black background, and if everything were done in whites and greys it would all be an incomprehensible mess. The colors let you see, and organize in your head, where the dangers are and what's closer. It might not have been stylistically accurate to the look of the movie but it made the game very playable, and that counts for a lot.

Plus, once you got into it you really stopped seeing the garishness of the colors. That was the brilliance of the vector graphics: they drew you into the game with their 3D style. Any game could have reproduced the trench run but most of those would have run it in 2D graphics, either from a side-scrolling or top-down perspective. This game did it with you in the cockpit and managed to really get you into the experience. It was a trip.

The arcade version is the purest, and best, version of the experience. The game was ported to home systems but those consoles lacked the ability to truly render the game with proper justice (let along being in all the voice clips that helped to set the stage). The Atari 2600 version is a perfect example: it's a decent little cockpit shooter that tries its best to do the whole 3D effect, but it's neither as pretty nor as slick, and it lacks the speed and intensity of the arcade original. It tries, but it fails, especially if you'd played the original version. It just wasn't the same.

Of course, we've gotten plenty of cockpit shooters since Star Wars: The Arcade Game, and several of those in the Star Wars franchise to boot. But this game set the stage and helped to point the way. It was fast, it was slick, and it had a core experience that couldn't be beat in 1983. For a few quarters it had all any gamer wanted and that made it an absolute classic, one that still holds up (at least for its core experience) even now.