I'd Rather Wander Around On Tatooine

I don't like to make blanket statements about any media I come across. Just because one entry in a series is terrible that doesn't mean that everything related is going to be bad. I think the Twilight films started off bad, and then ended just as terribly, but the third film in the series, Eclipse, is the singular bright spot in an otherwise horrible franchise. If I had written off the whole series I wouldn't be able to make that statement. 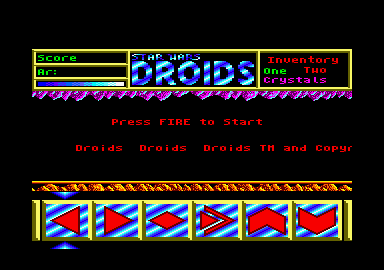 As such, when a video game from the lat 1980s has the "Droids" branding on it, I don't want to just ignore it out of hand. The droids in question, C3P0 and R2D2 are the most overused elements of the Star WarsThe modern blockbuster: it's a concept so commonplace now we don't even think about the fact that before the end of the 1970s, this kind of movie -- huge spectacles, big action, massive budgets -- wasn't really made. That all changed, though, with Star Wars, a series of films that were big on spectacle (and even bigger on profits). A hero's journey set against a sci-fi backdrop, nothing like this series had ever really been done before, and then Hollywood was never the same. franchise, and if I never had to see Threepeeo again it would be too soon. Beyond that, the 1985 cartoon, Droids, illustrated how little life there was to be gleaned from these characters; given their own cartoon adventures, they sucked. A game based on that cartoon likely would also suck but how would we know that if we didn't check it out first?

Well, I checked it out and, yes, it sucked. The game is described as a platform adventure but don't let that oversell you on the fun to be had in this game. Star Wars: Droids (for the Amstrad CPC, ZX Spectrum, and Commodore 64) does not guarantee fun in any capacity. It is the anti-fun. To describe it as a platformer would imply there's platforming of any kind. There isn't. Frankly, there isn't anything to this game, but the only way to truly experience that is to boot it up and suffer for yourself.

In the game, Threepeeo and Artoo have been kidnapped and taken to the Fromm Gang prison complex. There the droids have to climb up three eight stages of pitfalls and dangers, unlocking doors and fighting other droids, all so they can reach the planet's surface and escape. In the process they'll also do damage to the gang, slowly whittling down their resources until the gang is no more. Not that any of that story is easily conveyed in the game as this is a title with no music, and no text, that just expects you to figure out everything as you go along.

If I had to describe Star Wars: Droids I wouldn't call it a "platformer". Instead I's say it's a belt-scrolling adventure title, like a point and click with absolutely no pointing or clicking. If that sounds mindlessly dull, it is. There's no other way to really describe the feeling of playing this game. As Threepeeo (with Artoo following along slowly behind) you hobble your way along straight corridors, throwing crystals at enemies and occasionally doing Simon-style puzzles to unlock traps. You get to the end of one hallway and move up to the next level, all so you can do it again. Eight more times. 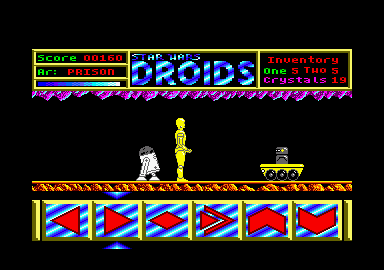 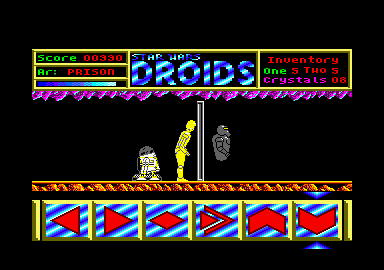 Beyond the basics of that setup the game is also hobbled in one further way: you don't really directly control C3P0. Instead of moving him with your controller you menu along the bottom of the screen to the various input commands you can give to Threepeeo. You can tell him to move left or right, throw a crystal (of which you have a limited supply), interact with a device, bow, or rise. That's all you can do and it's a very limited set of options, which is part of why this game has so little that you can do in it.

I can appreciate the idea of taking these two buddies and putting them into an adventure title. I think there's the possibility of a good game that could be devised from that concept, something like a mix of Prince of Persia and Another World (aka "Out of This World"). You'd take the two droids on the adventure, avoiding traps, pretending to be compliant droids, sometimes using each of their powers to get around, all before escaping. This is not that game.

I'm not sure why the programmers decided to hobble the play with such terrible controls. I know some consoles lacked a wide variety of buttons, but all of the consoles that received this game had full keyboards. They could have all used WASD controls or whatever with plenty of other inputs for the characters. If we're being charitable it may have been that the designers felt the game needed to be playable even by littles, so there's just a couple of inputs on the keyboard and everything else is on screen. Seems more annoying to me that way, though, not less.

Plus, there's a difference between making a game appropriate for little kids and making one that's just dull. There's no flair or liveliness to this game. It lacks anything close to excitement at all. This is a very dull and boring bell scroller that moves at a snails pace and never really gets going in any way, shape or form. Yes, the droids are nice and big, chunky graphics that look like the original characters. Beyond that, though, there is nothing else about this title to suggest it. 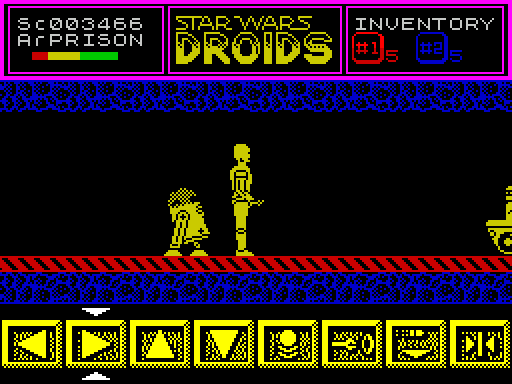 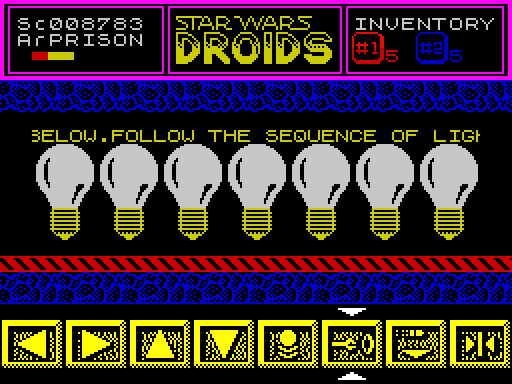 At this point we've seen two of the Star Wars mascot games, this one and Ewoks and the Dandelion Warriors and they've both been awful. I don't want to make a blanket statement but maybe, just maybe, it's better to avoid the mascot games from this era, at least until we have evidence they ever actually improve. Not that I'm holding my breath on that ever happening.