But Is He Really Bad Enough?

I caught an amusing little video on YouTube earlier today, one about "What if Anakin had listened to Mace Windu and had just waiting at the Council chamber instead of going to help Palpatine." That video, "Reasonable Anakin", posits that the whole arc of the series would be different because then Anakin wouldn't have gone bad, Palpatine would have been arrested (or killed), and the Empire never would have risen. It's an amusing thought experiment, handled with some humor by the video, but it got me thinking about Anakin Skywalker. 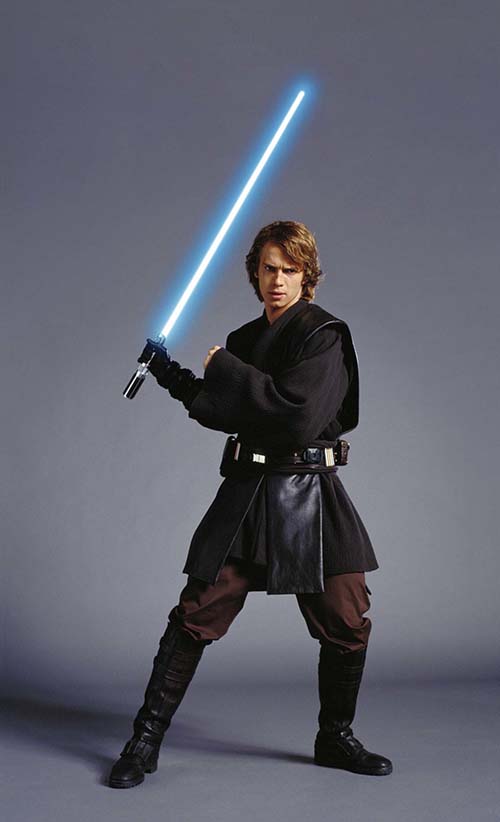 Anakin's story was laid out before Hayden Christensen was even cast in the role of adult Anakin (Adultakin?). We knew Anakin Skywalker had to become Darth Vader, as that was who he was in the Star WarsThe modern blockbuster: it's a concept so commonplace now we don't even think about the fact that before the end of the 1970s, this kind of movie -- huge spectacles, big action, massive budgets -- wasn't really made. That all changed, though, with Star Wars, a series of films that were big on spectacle (and even bigger on profits). A hero's journey set against a sci-fi backdrop, nothing like this series had ever really been done before, and then Hollywood was never the same. Original Trilogy. That was his prescribed path and there was no way for him to get around it. What the original trilogy had to do, once it was set on the path of following Anakin through his life (and not, like, giving us something set a hundred or more years earlier), was show us how good Jedi Anakin became bad Sith Vader. The films, in case you haven't seen them failed.

This is due to the writing of the whole trilogy which was, in a word, bad. Oh, the films are pretty to look at, and no one can doubt that Lucas could direct an action set-piece like few others, but the fact is that the man could not write a story with this kind of depth and complexity. He handled the Original Trilogy well, playing on its simpler Hero's Journey with aplomb (even has he made some small continuity errors that were hard to ignore). The Prequel Trilogy, thought, was a much more ambitious and nuanced story that Lucas really wasn't up to handling. I applaud his ambition but not the results.

Anakin, in essence, needed to go on a Villain's Journey (I'm sure someone has written that term before, but if not I'm coining it now). He had to follow a dark mirror of the Hero's Journey, going step by step down the path towards the Sith, with each step being entirely justified. He had to fall in love, despite what the council wanted. He had to choose his family over the needs of the Jedi. He had to choose his friendship with Palpatine over the laws of the Republic. And then he had to be willing to kill, and kill other Jedi no less, to pull all that off, fully embracing the darkness within. Lucas had the beats there, and you can see what he wanted to do, he just didn't spend the needed time on making those beats actually work.

I do blame Hayden Christensen for this, in no small part. He needed to play a deep and nuanced character, one that was both friendly and charismatic but who had deep darkness within. There are actors of his era that could have pulled that off. Jake Gyllenhaal is the same age as Christensen and has proven he can play all those aspects of a character with actual depth. Christensen managed none of that, making for an abrasive and utterly whiny lead. He needed Lucas's guidance as his director to really invest in the character and deliver a proper performance. That or Lucas needed to hire an actor that could do it on his own without needed direction. 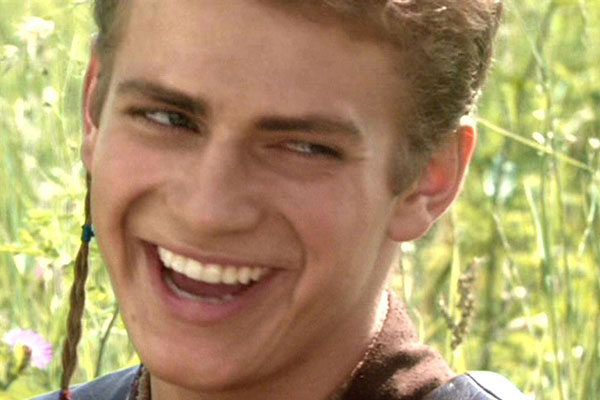 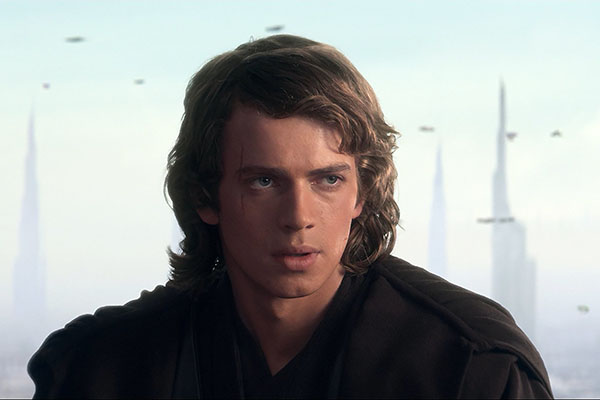 Thing is we have a version of that character that was played better, and with more panache, than Christensen: Matt Lanter (who, it should be noted, is also about the same age as Christensen). Lanter voiced Anakin all throughout the 2008 Clone Wars as well Rebels, Forces of Destiny, Tales of the Jedi, and multiple Lego Star Wars works. He is, in essence, the default voice of Jedi Anakin Skywalker now, and he's great in the role. He brings the needed charisma to the role that Christensen was so sorely lacking.

But here's the thing: despite how good he is in the role, and how much better I'd argue he would have been as a live-action Anakin (although that this, of course, speculation at this point), I would say that even The Clone Wars didn't really know how to turn Anakin from good Jedi to bad Sith. That's because most of his transformation had to occur in the third film of the Prequels, so the show could only hit at darkness to come. Instead, the series was much better at showing just how good Anakin was as a Jedi, as a teacher, as a brother, and as a friend. The series does a great job of building up Anakin as a person in a way the films never really managed.

If you look at the love story between Anakin and Padme, Christensen and Natalie Portman had absolutely no chemistry together. Portman tried, as hard as she could, but it just didn't work. Meanwhile on the show the voice actors Lanter and Catherine Taber did a much better job of, just through voice alone, conveying the chemistry and love these two characters had. They didn't share a lot of scenes on the cartoon but the ones they got worked really well. If we'd had that kind of chemistry in the films that could have sold us on Anakin as a character.

His dynamic with Ashoka is also fantastic on the show. She gets to be the brash and headstrong youngster, throwing that aspect of Anakin right back in his face. That's the kind of character interaction needed to let Anakin develop as a person. It reflects his own issues back at him so that, as he helps Ashoka grow, he grows himself. It's a brilliant character choice by writer Dave Filoni and producer George Lucas. Ashoka adds the depth that Anakin needed... if only that could be reflected in the films. Sadly, that's no possible because the series came out after the films had been said and done for over five years. 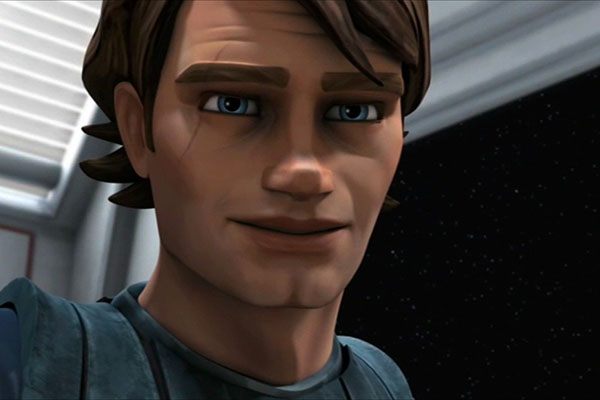 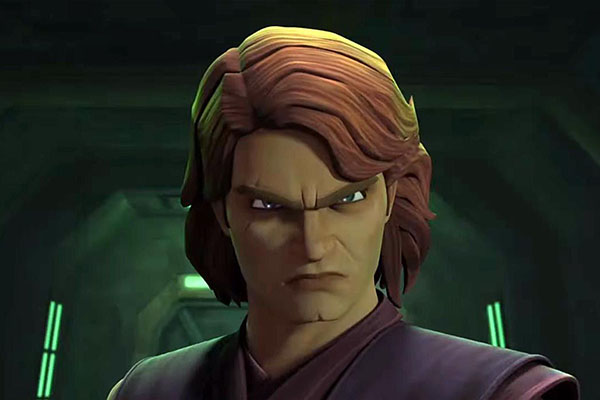 What I would love to see is a remake of the films, at least the second and third ones, with the voice cast of The Clone Wars in place of the original actors. Polish the script, of course, and maybe throw some scenes of Youngling Ashoka coming up the ranks as Easter Eggs. That way, when we get to The Clone Wars we can then see the grown Anakin goes on and feels the push and pull of the character from padawan to teacher to, eventually, fallen Jedi. All of that could tie together better than how it works now because, frankly, the series's treatment of Anakin feels like it comes from a completely different world.

I don't think there's anything wrong with the idea of following Anakin from hero to villain to redeemed Sith, from movies one through six, I just think the biggest flaw of how this whole part of the continuity works right now is the Anakin at the center of it. He's supposed to be our main character and one version of his is absolutely unwatchable. The other version, meanwhile, feels like a different character barely related to the Anakin we know. I like the second version better, I just wish we had him for all of it.