In the annals of the classic NES library there is probably no video game that defines "Nintendo Hard" more than Battletoads. Although there was games that were hard because they were poorly programmed, or simply unbalanced, Battletoads was clearly designed to punish players, to make them work for every inch, every second of game play, every next stage. There was never a chance to slow down, to take a breath, to cool a bit after a hard section; in Battletoads, the learning curve is a straight line that keeps going up vertically and expects you to keep up.

Developed by Rare, Battletoads wasn't really that far outside the norm for the kinds of games Rare produced. Considering other games from the company in that era -- Snake Rattle 'n Roll, Wizards and Warriors, Cobra Triangle -- Rare had a specialty for making fun to look at games that would absolutely punish you every step of the way. When you bought a game with the Rare logo on it, well, you had to know what you were in for.

The thing about Battletoads is that its punishment is next level. Dressed up as Rare's answer to Teenage Mutant Ninja Turtles (and, really, TMNT II: The Arcade Game), the game purports to be another beat-em-up like TMNT. That set dressing quickly falls away after the first level, though, as the toads descend into a tower, fighting birds and robots all before hitting the infamous Turbo Tunnel, and it's here that the game really finds its edge. The number of gamers of the 1990s that played Battletoads is high but the number that made it past the Turbo Tunnel is exceedingly rare.

Turbo Tunnel starts off innocuous enough, another beat-em-up stage with a bit of platforming. But then the toads find jet bikes to ride and the stage completely shifts. The players has to dodge walls that are cascading left and right, hit jump ramps at the right time, and dodge enemies as the drop more objects in the path of the heroes. And the stage gets faster and faster until it gets to the point where you're relying on memory and twitch reflexes to get through the stage. For many this was the point where, after they died all their lives and were set back to the start of the stage, that controllers were thrown and a new game was popped into the NES instead.

There's only one stage that uses Turbo Tunnel's mechanics in the game but the stage is far from an exception or a one-off. Over the course of the game's dozen or so stages the Toads are forced to ride bikes and surfboards, jet planes and weird monocycles, all while the game relentlessly attacks, over and over, without a single iota of forgiveness. It never throws the same challenge at players twice but that's a double-edged sword as it also means that players will have to learn each new challenge fresh without any lessons from the previous stages carrying over. 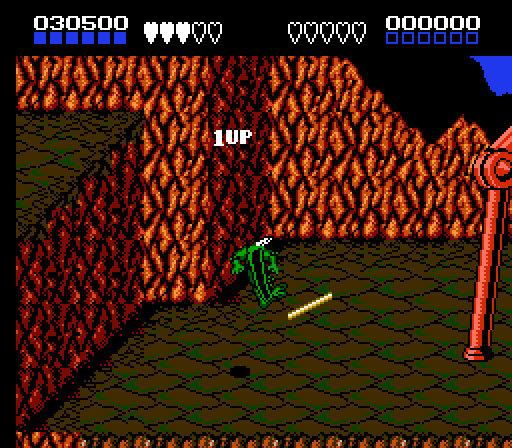 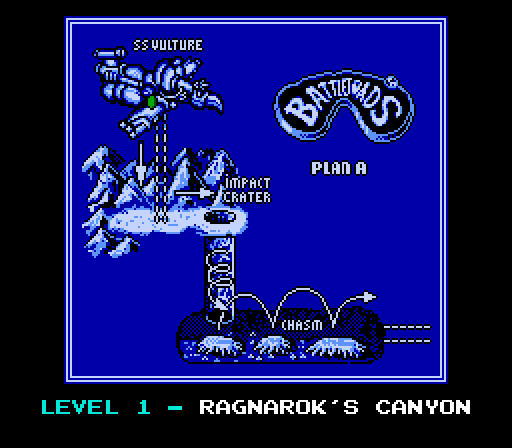 Let's not undersell the variety of stages in this game. Where the various TMNT games boiled down to the same thing in each stage -- go from one end to the other and beat up everyone that crosses your path -- Battletoads is never so mundane. You can go from riding a bike to grabbing onto giants snakes to navigate mazes, to then going through an icy cavern before plummeting through a "rat race" to defuse bombs. It's truly never the same stage twice in this game.

That said, if there's one thing in short supply in the game it's actually beat-em-up areas. The few times you're tasked with actually kicking the crap out of enemies are so rare that you might not remember all you're supposed to do to actually nail your combos and get in the satisfying attacks. For a game that wanted to be the answer to the TMNT, Battletoads seemed to find all the conventions of the genre boring. It's an ADHD-fueled journey through all the nastiest ideas from Rare, but it's hardly a conventional game by any respect.

Battletoads is rich in personality. The character sprites are chunky and detailed (especially for the era it came out in), and the lives all have variety of colors and style. That same defining trait about game play, that you won't see the same thing twice, does generally extend to the style and personality of the game as well. It's a very snazzy game, both in looks and sound, with delightful graphics capped by some really banging music tracks. The art direction was Rare firing on all cylinders.

It is that difficulty, though, that is the game's true defining trait. Whatever good or bad things you want to say about the game, Battletoads can be summarized by just how truly, punishingly hard the game can be. Casual players will likely never get past level three, and if they do then they'll find level 4 or 5 to be the next point where they die and die a lot. Experienced players that know what they're doing even struggle with this game as sometimes it just wants to kill you and there's nothing you can do about it. Battletoads is perfectly crafted evil in cartridge form. 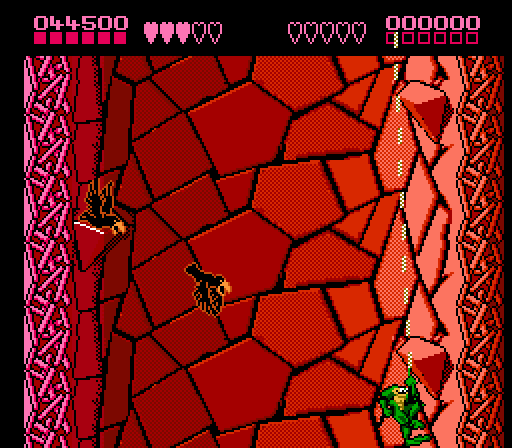 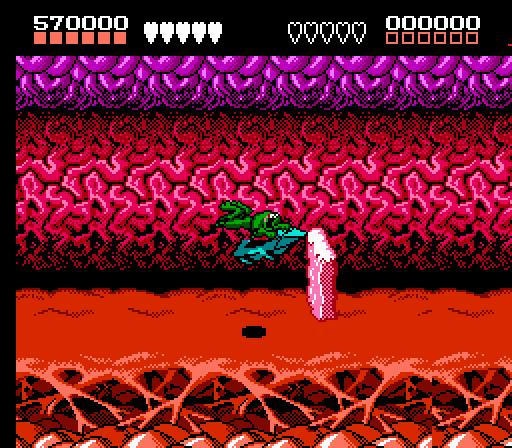 Rare clearly knew they had the game cranked up too high as subsequent ports of the game, to the Sega Genesis and its handheld Game Gear, toned down portions of the game and removed some of the worst stages. The same was true for the Game Boy iteration put out much later (after the Game Boy got its own official sequel game first). That port of the original NES title, battletoads in Ragnarok's World, once again saw a solid decrease in the difficulty as well as a few stages getting removed. The game was so hard that other systems simply couldn't handle it.

But the game was popular. It's "Nintendo Hard" lifestyle drew in many and spit them all out, but they came back again and again. Sequels were made for the Game Boy, SNES, Arcades, and even a decades later new title on Xbox Live. The legacy of Battletoads is its difficulty but it also gave it an exclusive air that people wanted to be a part of. "Have you played this brutal game? Wasn't it great?" The toads launched their own franchise that, for a time, did indeed rival TMNT and it was all because Rare created a relentless game that suffered no fools and took no prisoners.