Looking at the history of Disney AnimationThe House of Mouse built on their classics, Disney Animation is considered among the premiere animation masterpieces ever since their first release, Snow White, all the way back in 1937. you'll find that fans have broken the history up into distinct chunks: the classic era, the Disney Renaissance, the modern era (ad more, honestly, if you want to get into the weeds about transitions between the eras and more). Arguably the most famous portion of their catalog, the part that helped to relaunch Disney as a must-watch brand, and in the process raked in billions of dollars for the company, was the Disney Renaissance. It was a period of films that started, effectively, with The Little Mermaid and ended sometime around Tarzan. Movies before, and after, weren't the hits Disney was expecting and it took the company time to recalibrate and enter into the current era of animation dominance. 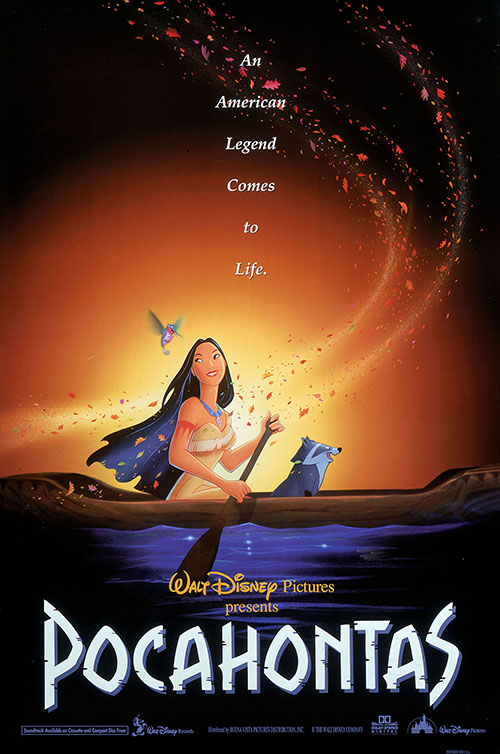 While Tarzan marks the last film in the Renaissance, more or less, the period for Disney was already on a steady decline before then. There were hits and misses throughout the period (although a "miss" in this era was a film not making back triple its budget, oh darn), sure, but the series hit it's absolute peak with the one-two punch of Aladdin and The Lion King. And then it went into free fall with Pocahontas. Why? Blame Robin Williams.

Okay, that's not really fair to the comedian, as it wasn't William's fault that Disney took the wrong lessons from Aladdin. That was a film tailor-made for Williams and his shtick, a movie the production team wanted to make that took cues from Williams first in foremost in making the film's breakout character, the Genie. What fans saw was a movie designed the showcase the talent of a very funny comedian/ What $isney thought was, "we need more funny creatures in our animated movies." The Lion King was a hit despite Timon and Pumba, but they were characters in the vein of the Genie, the plucky comic relief with the famous voices. And then you have Pocahontas. which said, "what if famous voices, plus comic relief, and that's the movie?" Who needs a real story to drive a film when you have those two elements?

If it's not clear, I'm not a huge fan of Pocahontas. I actually hadn't watched the film since it came out all the way back in 1995, so that's a 27 year gap. I couldn't come in with fresher eyes as a reviewer, remembering barely anything about the film (other than that Pocahontas had really pretty hair), and yet even then, giving the film every due consideration, I have to admit: man, this film sucks. What it has is a very pretty art style, the voice work of (pile of sentient living garbage) Mel Gibson, and some comedic animals. Beyond that, it's pretty much a dud.

Thing to bear in mind is that, financially, Pocahontas was a big hit. Not as big as The Lion King (which pulled in nearly a billion dollars on a budget of $45 Mil), but it's $346 Mil on a budget of $55 Mil made Pocahontas a solid Box office performer. Whether that was because audiences really liked the film or not, though, is a point of debate. Bear in mind that in Hollywood, and with audiences, the best advertisement was your previous film. Film series live and die on the success of what came before, and for Disney there was no bigger ad than The Lion King. In comparison to that film, $346 Mil is a steep drop off. The film, to put it mildly, did not live up to expectations. 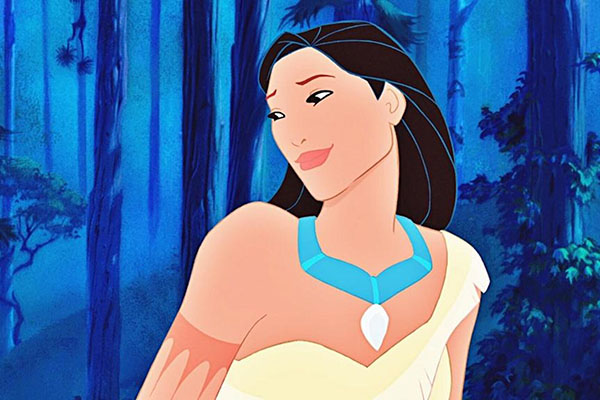 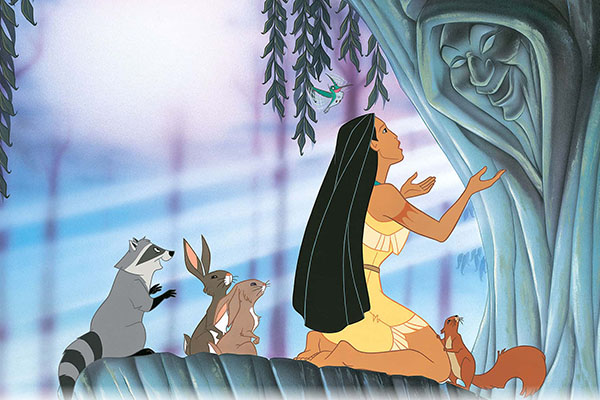 Watching the film you can see why the movie under-performed. The story is only so-so. It takes the history of Pocahontas (Irene Bedard voice actress, Judy Kuhn singing), specifically the time in her life here she fell for John Smith (living pustule Mel Gibson) after he, and his crew, arrived in the "New World", and then defended him from the axe of her father when Smith was supposed to be executed. It then spins that history out into a tale that, frankly, is a dull retread of The Little Mermaid: girl, daughter of the chief, longs for a life beyond her home, finds a man who promises a new world, and then have to defend him from the dangers of her people, and his. Oh, and along the way two annoying animals hang out and guide her. It's all very rote, and very Disney (in all the trope-ish ways).

Part of the issue with the film is that it lacks any energy. Being such an unabashed retread of movies Disney had already made, the film barely does anything to distinguish itself in basic construction, instead simply going through the motions. Making things worse is that it doesn't bother to invest in its characters at all. Smith is a idealized Prince Charming by a different name, with the complete lack of development that implies. Pocahontas meanwhile is operating completely in magical princess mode, what would be a Manic Pixie Dream Girl were this a different kind of film. Neither of them get shading or nuance, they're just stock Disney characters going through prescribed actions.

Making matters worse is that the music in the film is just boring. The film opens with a song for the white explorers, "The Virginia Company", and it's about the best thing the whities get to sing. It's... well, I won't say inoffensive because the history that the film (very poorly tackles) is very racially charged (even if the film bungles that), but it's not a horrible song, it's just not a great opening number. The Natives get "Steady as the Beating Drum", which is equally blah, and then Pocahontas launches into her first big number, "Just Around the Riverbend", which is a total dud. The song rushes through it's lyrics, never finds a good pace, and fails to give us any reason to care about the girl singing. Her second song, "Colors of the Wind", is the best song in the movie (it's the track everyone still remembers from the song). It's not a super great song, but among all the other tracks it's still miles better. And then the film tries, and fails, to get political with "Savages" and I wish it would all just end.

I think what hurts the film the most is that it's a Disney-fied version of real historical events. It tries to apply the Disney PrincessesReleased in 1937, Disney's Snow White was a gamble for the company: the first fully-animated, feature-length film ever created. It's success lead to the eventual creation of the Disney Princess franchise, which has spawned 13 main-line films and multiple spin-off movies and shows. template to a real person and real events, and so the film is torn in two directions. On the one hand it's tackling something that really happened, and there were real historical and political repercussions for these events. The film doesn't really address them (even the big number, "Savages", does a "both sides are wrong" comparison between the natives and the settlers which is just icky), gliding over all those problems so it can tell a princess story with cute animals and big, feel good songs. It just doesn't work and because of that the film basically avoids doing anything. If it invested in the characters it would have to have them actually talk frankly about the evils of the English and we can't have that. Better to sing a few songs and get out in a svelte 80 minutes. Can't challenge the little kiddie's minds. 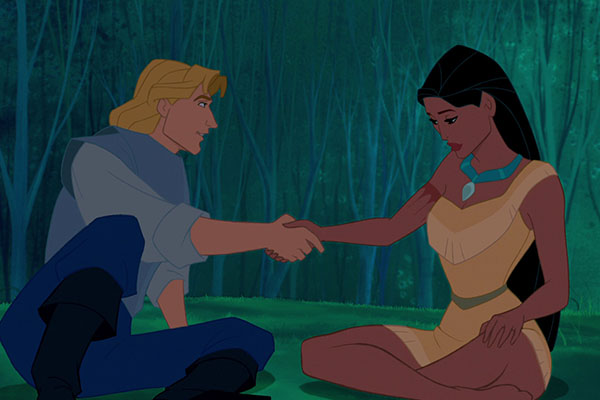 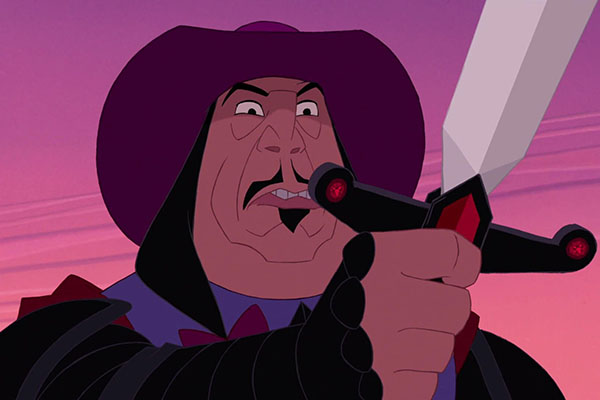 The one thing the film has going for it is that it's very pretty. It has a distinctive art style that blends the classic Disney style with more angular features for the human characters. It's a fantastic piece of hand-drawn animation that looks amazing, frame to frame. This is the kind of film that you could see turning the volume off so you could just watch the pretty artwork flow on past. It's when you turn on the film, when you have to listen to the dialogue and the bad songs, that everything comes crashing down.

In Hollywood you're only as good as your previous film. For Disney their previous film was The Lion King and that was a smash. That meant Pocahontas was destined to be a hit by audience carryover. Pocahontas marked the beginning of the end for the Disney Renaissance, though, and the rest of the films in this era wouldn't recover from the damage this animated fiasco caused, with only Tarzan even breaking $400 Mil at the Box Office.