Let's Sing About Being a (Wo)Man

When the new version of Mulan came out, and was eventually available as part of a normal subscription, it presented an interesting opportunity: I could actually see a Disney live-action adaptation without having seen the original. Despite growing up at the height of the Disney Renaissance, I hadn't ever seen 1998's Mulan (the last one I recall seeing in theaters was Hunchback which might explain why I didn't go back). I've seen plenty of the other films Disney has designated for live-action release, just not Mulan. 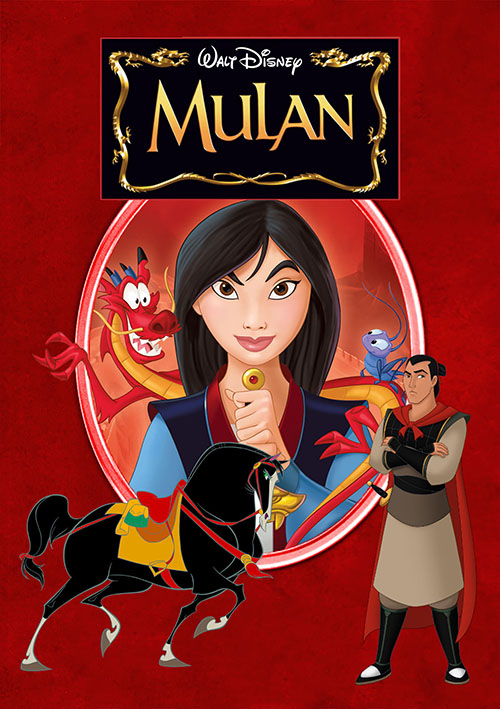 Of course, in the case of many of the other "masterpiece" films Disney could adapt, there are plenty of other versions of the characters out there. If you have access to children's television as a child you like will see multiple versions of the various fairy tales meaning that, even if you hadn't seen the Disney version you've likely seen some version. Mulan, though, is a Chinese story that, up until the House of Mouse elected to make the character into a Disney PrincessesReleased in 1937, Disney's Snow White was a gamble for the company: the first fully-animated, feature-length film ever created. It's success lead to the eventual creation of the Disney Princess franchise, which has spawned 13 main-line films and multiple spin-off movies and shows. (a designation I debate since she's not a princess ever in the film, but she does become a counselor to the Emperor), there wasn't much American audiences probably knew about her. I could go into the 2020 Mulan about as blind as anyone could be, and it was... interesting. It wasn't a good movie, but it was at least a new Disney experience.

Going into the original animated version, of course, I couldn't make the same claim; I've now seen a version of the story, I am forever spoiled. So this time I simply got to see what all the fuss was about. Why is this film considered a classic, held up alongside The Little Mermaid and Beauty and the Beast? Having now watched the film I honestly don't know. This movie wasn't as bad as Hunchback or Pocahontas but it's still pretty meh. I think audiences were right to snub this film back in 1998 because there's really nothing special about this lackluster animated product.

Although the broad plot of the film is the same as in the 2020 remake, the details are different. Mulan (Ming-Na Wen) of course goes off to fight in the war against the Huns, taking the place of her father, and she does it secretly as a man (since women don't serve in the army). Instead of going off alone she's joined by a talking dragonette, Mushu (Eddie Murphy), acting as the comedic sidekick for this piece (as every film after Aladdin had to have it's "Genie"). The two work to get her accepted in the army, help her to become the best soldier she can be and, after she's discovered to be a woman, have her still find a way to save the Empire from the Huns as the enemy secretly invades.

There are other changes made for the live-action version. There's no analogue to the evil witch (although a non-talking falcon does kind of fill some of the parts of the role), and Mulan's love interest here is also her commanding officer, Captain Li Shang (BD Wong), instead of those being to separate characters. But, by and large, these films can overlap each other pretty clearly without much translation needed between them. Disney stuck pretty close to the script for their live0action film, and all the bones come from this film. 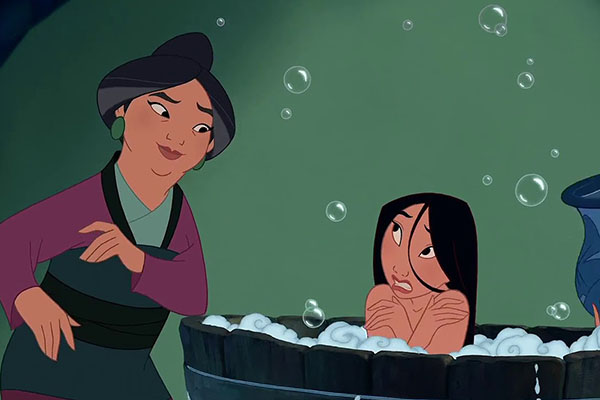 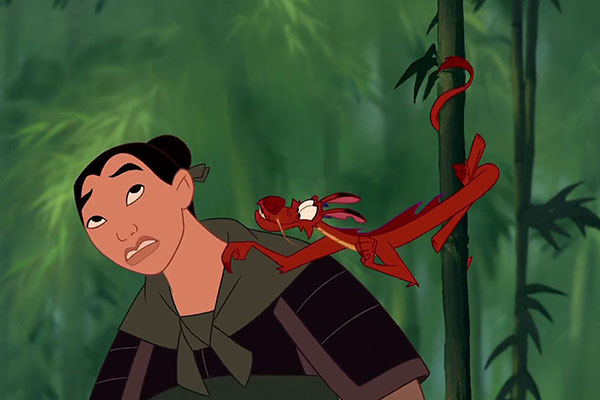 In fact the biggest change from the animated movie is the part I appreciated the most: where this film is a musical, the live-action film ditches all that song and dance. I know there will be those that think I'm an idiot for saying that but, frankly, the songs in the animated Mulan suck. They aren't truly terrible, caterwauling, in fairness, but none of them strike me as absolute winners. There are ear-worms in other animated films that you will remember even 30 years later --- "A Whole New World" from Aladdin, "Hakuna Matata" from The Lion King, or "Beauty and the Beast" from, well... you know -- but Mulan lacks any of those breakaway pop hits. The music is fine, but fine isn't good enough for a musical.

I think that might be why I didn't engage with the rest of the film, to be honest: this is a musical and if the music doesn't hook you the rest of it won't. And this is a musical that very much uses the songs to advance the story. We have two different songs set to montages -- one where she gets all dolled up as a potential bride, and the next where she trained to be a soldier, a nice dichotomy, honestly -- and further songs that advance her character and the world she's living in. These should be big growth moments for her but I was left cold because I didn't care about the songs.

Although, I'm sure at least some of the problem is Mushu. The dragon, as voiced by Murphy, is super annoying. He's not doing anything really different here than he did over in Shrek as Donkey, but his patter and banter worked will in that Dreamworks film because he had a second comedian, Mike Meyers, to play off of. Here, without someone to play along in some form, his whole shtick falls flat. Mushu is obnoxious, dragging down the film instead of getting the movie to play along with him.

Perhaps, too, the rest of the movie wanted to be more straight-laced than Mushu, and that's why the dragon doesn't work. Mulan, although well acted by Ming-Na Wen, is a serious character with serious drama. The moments where the film tries to insert levity just don't work. Also, many of the jokes (such as calling her a "cross-dresser" or saying she was "in drag" seriously fall flat). It's all a very bad mix of bad comedy and awkward moments that leave you wishing Mushu simply wasn't in the piece at all (which is probably why he was excised completely for the live-action version). 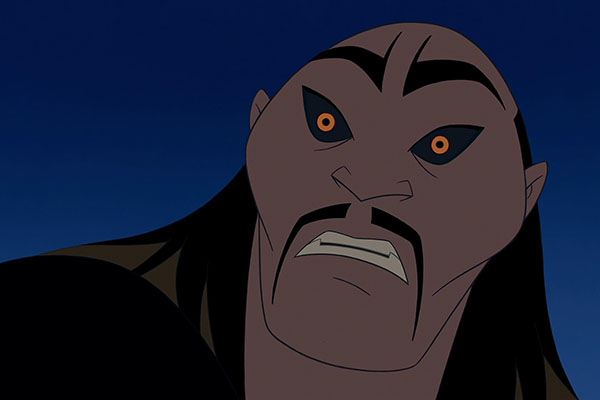 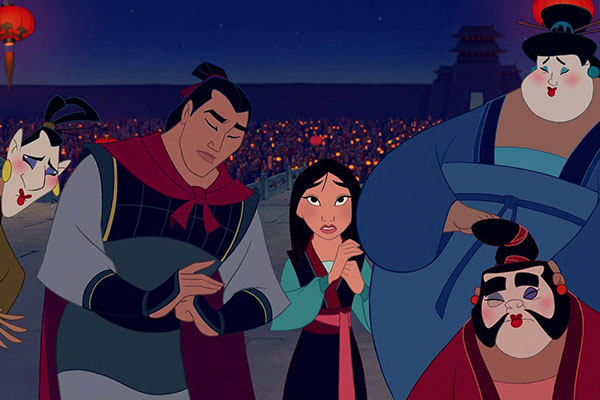 Of course, if you take out Mushu, and the music, what you're left with is essentially a 30 minute movie. I get why Disney put all these disparate elements in the film -- they wanted to recapture Aladdin, and film they'd tried to make, over and over, essentially since that Arabian-themed movie came out. But this movie could have benefited from a better tone without all the "house style" additions Disney forced in. It's a very ell drawn movie, beautifully animated and carefully crafted artistically, but the story, humor, and music are all lacking.

I didn't care much for the live-action film but I'm left in this weird place where I like the originating animated movie even less. I waited 22 years to see Mulan and, having now watched two version of the film, I'm good. Some may consider this a classic, but this is going to be a hard pass for me in the future.