He Was Right, He Certainly Did Wreck It

I'm a big fan of the original Wreck-It Ralph. I'm sure a lot of classic gamers are since that movie was a big old love letter to the entire genre. Sure, it told the tale of video game character that actually didn't exist in the classic era -- the "villain", Wreck-it Ralph (John C. Reilly) from game "Fix-it Felix" and his eventual friend, who also helps him grow into a hero, Vanellope von Schweetz (Sarah Silverman) from the racing game "Sugar Rush". That doesn't detract from all the details it gets right, including numerous cameos from other, real classic games. The original is one of the best Disney movies, hands down, and a personal favorite of mine. 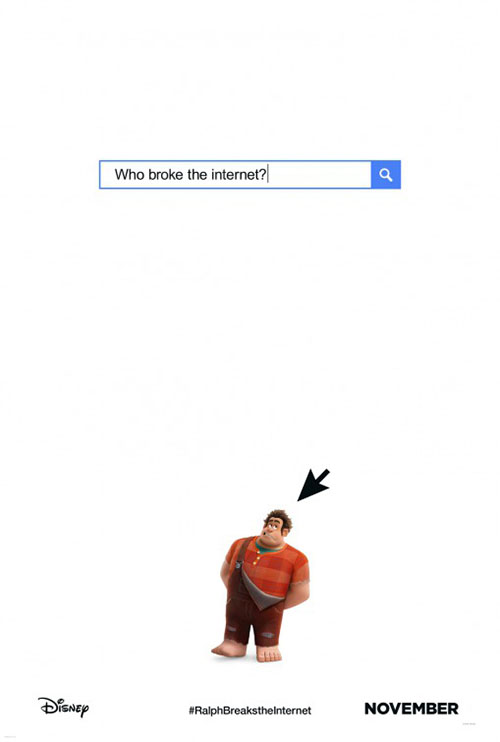 Naturally, when a sequel was announced I was excited for it. Sadly, the trailers release for the film didn't really seem to sell an adventure I could care about. I was still interested but I had tempered feelings about the movie leading up to its release. Tis should be obvious at this point since I've only just not gotten around to watching the film, a full week-and-a-half after it came out. I waited until I had a day off, and could go early in the day, so as to avoid screaming kids and obnoxious audiences -- it's a family movie, and if the film itself wasn't going to be that great, at least I could see it without a bunch of annoying people around me.

And, sadly, my worries more or less bore out. The sequel, Ralph Breaks the Internet: Wreck-It Ralph 2, doesn't really do a whole lot to justify its existence. It's the kind of sequel people tend to expect when they hear the word "sequel", a film that largely coasts by on the power of the original release, introducing new characters but in no way truly reinventing itself for a new story. It exists, and does it's job of continuing the story of the first film, but never in a satisfying way.

We pick up with the main characters of Wreck-It Ralph six years after their previous adventure. Ralph and Vanellope are still the best of friends, but V is starting to get tired of her daily routine. All the bonus tracks and shortcuts in her game have been unlocked and while the basics of racing still interest her, Sugar Rush does not. Ralph tries to help things by bashing open a new track for his friend, something devilishly interesting, but this only leads V to drive off the main track, confusing the player "controlling" the game. The player yanks too hard on the steering wheel to fix the situation, breaking the wheel and putting Sugar Rush out of commission. Without a new steering wheel, Sugar Rush will be closed down, but the only steering wheel is Online and too expensive for the arcade owner, Mr. Litwak (Ed O'Neill), to buy.

So Ralph and Vanellope head out onto the new installed Internet to try and find the steering wheel and get it shipped to the arcade. This then leads them to overbid on the wheel at Ebay (they have no concept of money) and then they have to earn the money to buy the wheel to fix the game. In the process they end up having a bunch of random adventures Online, and V gets mixed up in a new racing game, Slaughter Race. This game is, in short, the kind of wild adventure V is looking for. Her time Online is changing her but she worries she may be growing apart from Ralph while Ralph becomes needy and co-dependent. Soon the two have to figure out what they each want before a virus (that Ralph essentially unleashes) destroys the whole Internet, and both our heroes in the process. 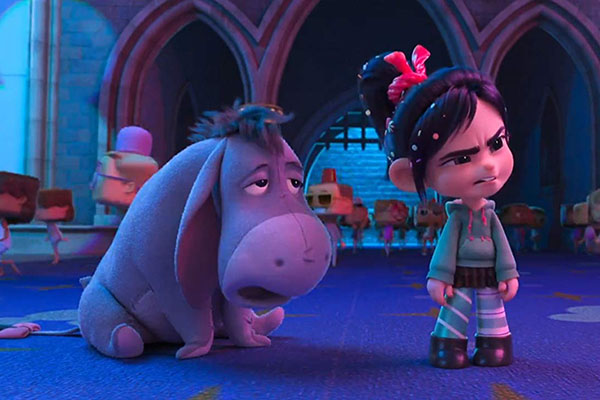 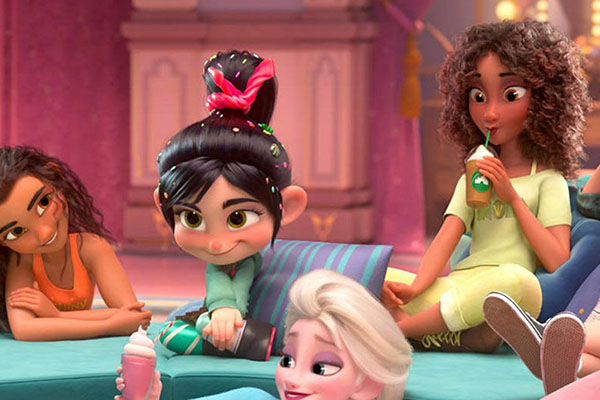 So, the first thing the movie does is swap out classic video game characters for Internet companies and memes. While I can certainly appreciate the movie trying to broaden its scope, to not use the same exact characters with the same jokes again. Unfortunately for the film there's a certain nostalgia gut-punch from the classic games that can't be replicated by Google, Twitter, Amazon, and the like. These aren't characters that we've grow attached to over 30-some-odd years but faceless corporate machines that have yet to go away. Sure, there's a blink-and-you-miss it Geocities gag, but those kinds of nostalgia-based gags for the Internet are few and far between in the movie. Sure, there's an extended riff on a YouTube like video sharing site, but where are gags about Homestar Runner or Newgrounds or the like? For being a movie about the Internet, the film is oddly sanitized and joyless.

It's weirder still when the film clearly still knows how to hit those nostalgia centers. The opening and closing sections of the movie are set at the original arcade, and we get to see classic characters, having jokes and riffs about them, and it's a lot of fun. Too much of the movie, though, focuses solely on the Internet and completely forgets all the arcade characters completely. A plot line is actually setup for Fix-It Felix Jr. (Jack McBrayer) and his wife Sergeant Tamora Jean Calhoun (Jane Lynch) where the adopt the various kid racers from Sugar Rush after that game is temporarily unplugged. It seems like we're going to get a weird adventure with them as they learn to become parents and find a way to be happy with all these kids. And then they disappear until the last five minutes and suddenly have figured out everything they need to be parents (and that's played off as a joke).

Things like this, or the extended Disney Princess riff in the middle, or all the one-and-done Internet meme appearances, show a lack of focus for the story. The movie goes in a lot of directions without ever really focusing on any one set-piece for very long. The original movie spent a large amount of time in Sugar Rush, but there's no one section of sequel give that kind of focus, that level of attention and detail, to equal the original movie. There's a lot going on, to be sure, but none of it lands with the same impact, or has the same level of lived in feel.

It's really weird, too, because it could have been easy for the film to focus on one set-piece quite easily. Slaughter Race, an Online racing game/Grand Theft Auto-style adventure, could easily have been the focus of the movie and it would have worked out pretty well. Have the A-plot follow Ralph and V as they try to navigate Slaughter Race, with Ralph getting over being afraid of losing V as he sees her skills in the game, while the B=plot could have focused on Felix and Tammy back at the arcade. It would have made each section feel more necessary as well as giving us plot lines to actually care about. 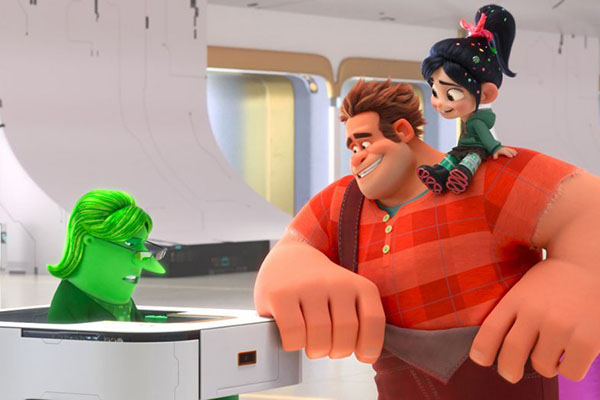 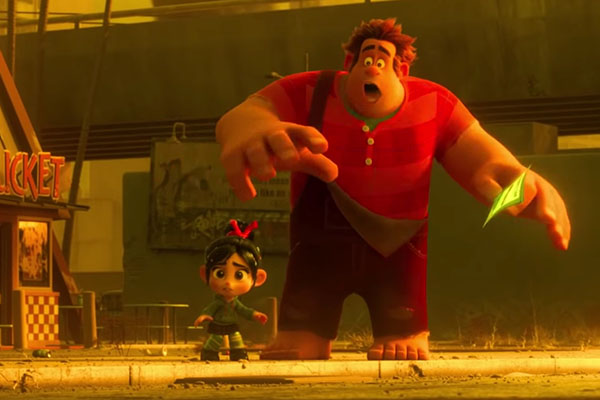 Sure, by the end of the movie the characters are still able to reach a half-way satisfying conclusion, but it's only because Reilly and Silverman milk all they can out of an underwritten movie. The film loses its way for much of the runtime, but these two characters (and their actors) are pretty great in any scenario. I just wish the film around them was better than it was.

So yeah, Wreck-It Ralph 2 is a mediocre sequel to the original. As far as Disney sequels go it's actually not all that bad, but then Disney has produced a lot of truly terrible (largely direct-to-video) sequels over the years, so that's not really a very high bar to get over. By the time the movie ends, and the credits roll, you will have probably enjoyed yourself well enough. It's just that if you were expecting anything near the heights of the original, you'll probably leave sorely disappointed.