It's a Cold One Out There

There was a time where Disney movies were some of the biggest hits in the land. The Disney Renaissance (as it was called) started with The Little Mermaid and extended through Beauty and the Beast, Aladdin, and The Lion King (and also The Rescuers Down Under, although that was hardly a hit) before tapering off after the period of Pocahontas through Tarzan. Disney was a powerhouse for a time, and they would be again, and all it would take was a little movie about snow and sisters. 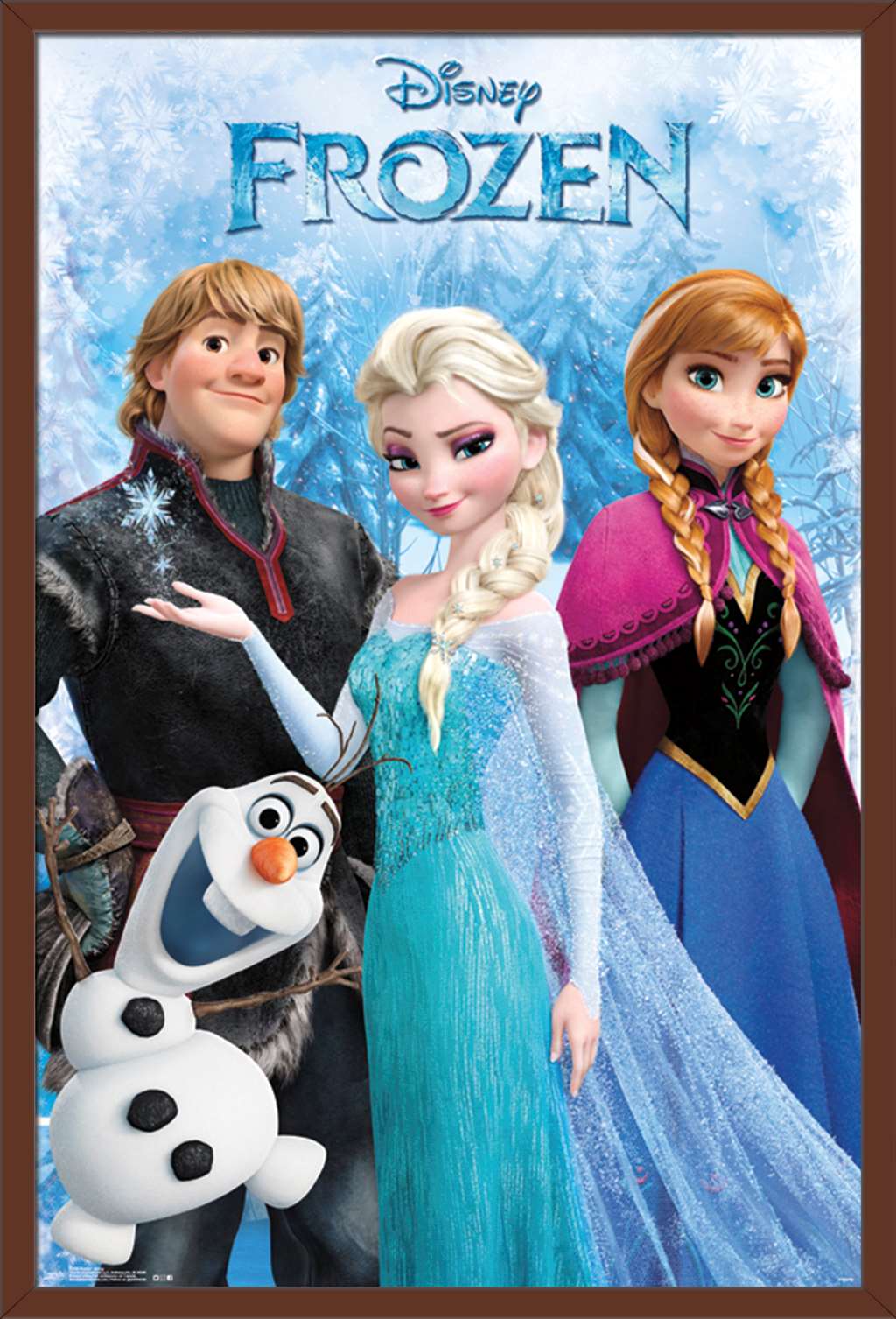 Okay, so yes, that's an oversimplification. Disney had a few successes here and there, but it took them not only going all in on 3D animation, as well as marrying in their Disney Princess brand, to really see a true turn-around. Tangled led the way giving the world a solid reinvention of "Rapunzel", but it was Disney's (very loose) take on "The Snow Queen" that launched their name back into the stratosphere. Upon it's release Frozen became a smash in, raking in an impressive $1.2 Billion dollars against a budget of $150 Mil (effectively half the budget of Tangled for over twice the return on investment). Disney had a the hit they wanted proving this whole 3D animation thing was really where it was at.

That's not to downplay what works about Frozen, mind you, as this was a brilliantly engineered movie. And it was engineered, mind you, going through several treatments before the Mouse House had just the right film to put out. Famously one of the big reasons for this was that the lead villain at the time, the character that would become Elsa, had such a show-stopping number ("Let It Go") that the team knew they had to rewrite the movie to make her, well, not the villain. Suddenly the Snow Queen become one of the protagonists of the film and the Frozen that was meant to be was born. However long it took Disney to get it there, the results speak for themselves.

In the film we're introduced to the young Elsa (voiced by Eva Bella first, and then Spencer Lacey Ganus, before being voiced as an adult by Idina Menzel) and Anna (voiced by Livvy Stubenrauch and Katie Lopez, and then Agatha Lee Monn, before being voiced as an adult by Kristen Bell), the two princesses of Arendelle. Although not revealed to the public, Elsa has powers, control over ice and snow which comes from her hands (well, at least her hands in the beginning). Although she and Anna loved playing in the snow she'd create in their rooms, an accidental blast of ice magic at Anna sends the girl into a comma. The local magical trolls (a kindly bunch) are able to heal Anna but they warn that a blast to her heart could prove fatal. The king and queen (voiced by Maurice LaMarche and Jennifer Lee, respectively) tell Elsa that she has to keep her powers in check for the good of her sister, so Elsa locks herself away in her room for years.

Then their parents die (it is a Disney movie, after all). This happens when the girls are adults (Elsa 21, Anna 18), and that makes Elsa the Queen of Arendelle. At her coronation, as Anna gleefully zips around, the gates of the castle finally opened after years (the first time since the icy blast that almost killed her, although Anna can hardly remember it at all), Else has to keep control of herself, to not let anyone know about her powers. But then she's hit by shocking news: Anna has fallen in love with a man she just met, Hans (Santino Fontana), a prince of the south isles. When they ask for Elsa's blessing the Queen forbids it ("you can't marry someone you just met"). Anna pushes, Elsa loses control, and she unleashes an icy blast that scares everyone. Elsa has to flee, to find safety because she fears what people would due to her (in part because of the fear her parent's instilled in her). But they also sets off a sudden cold snap in the middle of summer, freezing the kingdom. That leaves it up to Anna (and Kristoff, voiced by Jonathan Groff, a friend she makes along the way) to find her sister and find a way to end the endless winter. 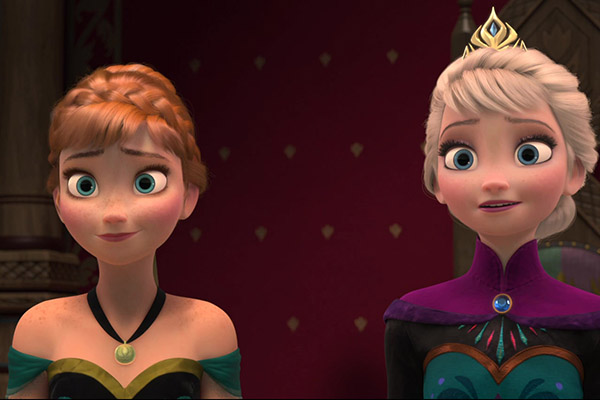 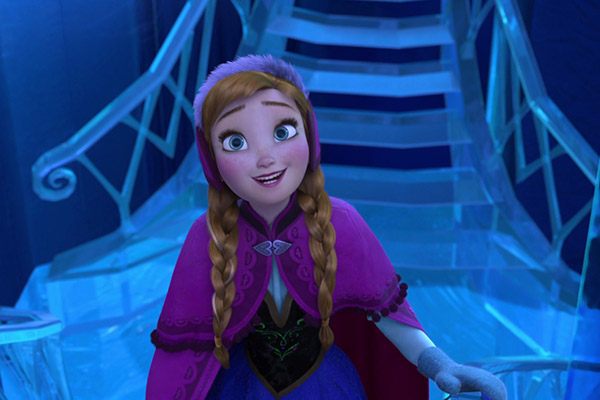 For the outset you can tell that this film was designed to act like an subtle attempt to change the tropes of Disney Princess films. Whether that was the intention from the beginning, before Elsa got her show-stopper and the film had to change its focus, is a matter to think on but suffice it to say that the end result feels like an attempt to walk back all the "issues" with Disney's "girl friendly" films and strike a different kind of movie into the canon.

For starters, the film directly mocks the idea that a princess can find her prince and immediately fall in love with him. Anna meets Hans, they have an instant connection (and a fairly fun little song), and he proposes instantly. This is how it always works in these kinds of films and who are we to say otherwise. Well, Elsa is, in the first move that says, "wait, this isn't going to be the standard formula here." You can see how in an early draft Hans might have been Anna's right-hand man as she goes out to find her sister a bit later, but here Hans is the guy she thinks she likes because of an infatuation. Not the same thing as love.

Of course, the film does also eventually reveal Hans to be a bad guy. Like a cold-hearted villain (to use the movie's own description) who would rather see both sisters dead while he acts as a regent in their stead. That's certainly not how these kinds of tales are supposed to work (even if it does seem much more realistic in the scope of actual politics). Girl meets guy, they kiss, and it's eternal love, not girl meets guy and he's secretly an usurper there to steal the throne for himself. That's a solid twist on the formula.

But then the film also wants to change up what it means to love, what an act of "true love" has to be (it doesn't have to be a kiss), and who the true heroes of a film really are. In previous Princess films the damsel would need a man to save her and we almost have that here, too. As Anna is dying (from an accidental blast of cold magic to her heart) she could either get a kiss from Kristoff or go and save her sister from an attack by Hans and Anna chooses the latter. She saves her sister instead of letting a kiss save her, making her the true hero of her own adventure. 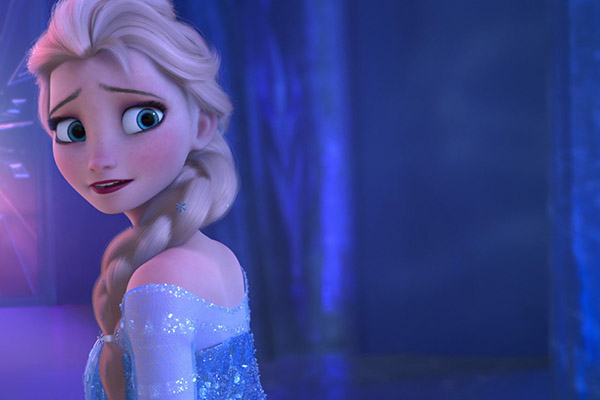 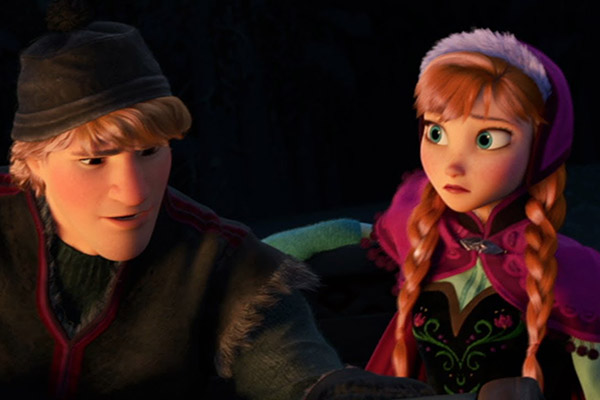 What most people remember about the film, though, is the music. Yes, "Let It Go" is the obvious show-stopper (put on loop by many little kids after this film, and its soundtrack, came out). The song is pretty good, although honestly I think there are better ditties in the film. Anna's songs -- "Do You Want to Build a Snowman?", "For the First Time in Forever", "Love Is an Open Door" -- I think have held up better because they haven't been played as much. The message of "Let it Go" is solid but it feels like Elsa is singing it for the audience. Anna's songs, by contrast, work because she's singing them mostly for herself. She can't stop herself.

That of course gets back to what I personally look for in a musical: context. Anna, a shut-in that hasn't gotten to see a lot of people (not even her sister who locked herself away) doesn't really know what to do except sing and await a day for celebration. Her songs come from being stuck and pent up and alone. Elsa's big number is great, and it reaches for the same emotions, but it feels like it goes so far above and beyond that it crosses back around a bit. It's a Broadway number without the personal context anymore, a showy piece that knows its a showy piece which actually makes it less effective in a way. It has its fans, and I won't argue with that, but the number doesn't work for me as much.

That said, those songs are all better than the troll song, "Fixer Upper" (which is cute but forgettable), or Olaf's number, "In Summer" (which is just awful). But then, everything about Olaf is awful. He's the cute and funny comedic relief that always gets added to one of these films, but Olaf is just such an obnoxious character. He's written to be funny but you can't force humor. Olaf tries so hard that he becomes absolutely tragic, an awful waste of space that should serious;y just go away. Sadly, instead, they gave him a bunch of short films showing there is no justice in the world.

Still, all things considered, Frozen is a winner. It's easy to see why this film managed to rake in all the money ever as it's powered by a solid message, two strong characters, and a pretty good soundtrack. It's not my favorite of the Disney Princess canon (I like Tangled a lot more), but it as so many good things going for it that you can see how it struck a chord with so many people. And then led to a bunch of shorts, and a sequel (and rumors of another one slowly making its way through the studio system). This was the hit Disney wanted and they got it in spades with Frozen.