Disney is very protective of their animated masterpieces. The House of Mouse used to say, "no sequels!" for their animated works (aside from The Rescuers Down Under, for some reason), shoving all of their "sequel" works off to direct-to-video and DVD. They didn't want the stink of a bad sequel ruining their precious movies. It's fair, I guess, but a sequel is a sequel. Any kid growing up seeing The Return of Jafar didn't think about the business-side economics of the decision, they just saw an Aladdin sequel. 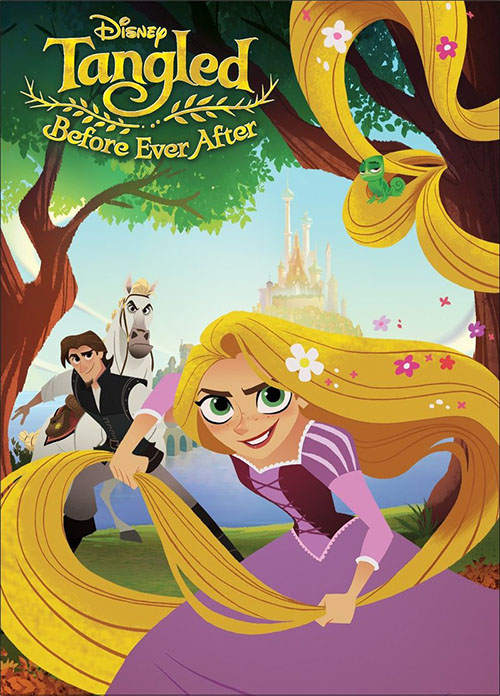 That's likely why Disney eventually relaxed the policy, letting the blockbuster Frozen II out the door, along with all the animation-studio produced Frozen Shorts. But before that we had the Rapunzel who, sadly, didn't fare as well. With their long-haired princess, Disney took their older route with the character, shoving her off to TV for a cheaper animated series (well, and one okay short cartoon). That's not to say these works are necessarily bad, but they certainly don't match the high standards of the main Tangled film.

The first of the two short films we're looking at, this one clocks in much farther on the "short" side as it's a six-minute toon. Technically a sequel to Tangled, this film is set on the eve of the wedding between Rapunzel (Mandy Moore) and Eugene (Zachary Levi). The kingdom is all decked out, the celebrations are ready, all that's needed is for the wedding to go off without a hitch. Sadly, for Maximus (the horse, head of the royal guard, and ring bearer) and Pascal (flower lizard), the rings roll off the pillow at the wedding ceremony and the two animal companions have to run off after them so that Rapunzel and Eugene can get married properly.

This short is, to put it mildly, pretty bad. From a technical standpoint it's solid, having the look of the big-budget film that preceded it. Of course, Tangled Ever After was mad by the head Animation Studios so it's only to be expected that it would look the part. Created and packaged at the front of the Beauty and the Beast theatrical 3D re-release, this was meant to be a big bonus feature for fans of the Disney PrincessesReleased in 1937, Disney's Snow White was a gamble for the company: the first fully-animated, feature-length film ever created. It's success lead to the eventual creation of the Disney Princess franchise, which has spawned 13 main-line films and multiple spin-off movies and shows. franchise, and the Mouse House wanted it to look the part. It does, absolutely. 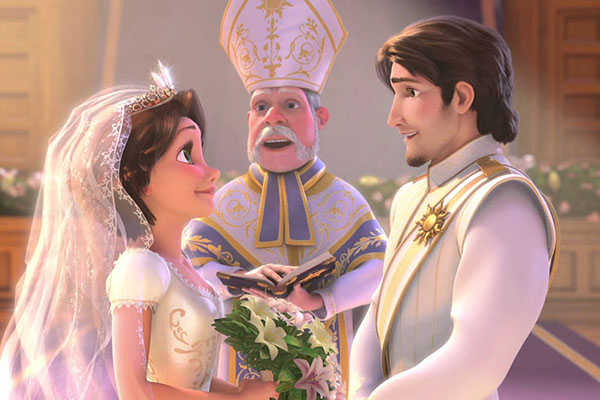 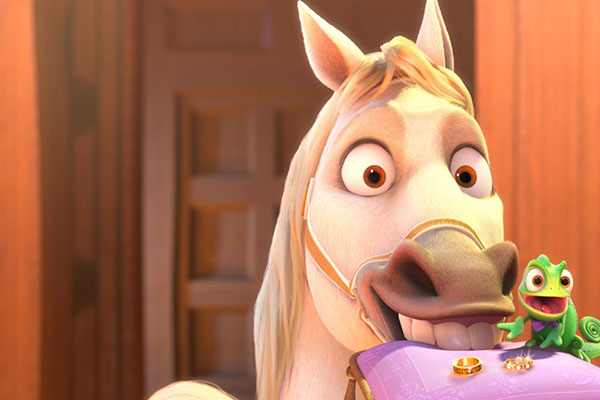 Where it falls apart is in the story. Maximus and Pascal are, honestly, the Olafs of Rapunzel's world (as in they're the annoying companions to the princess that every Disney film seems to have, as per Olaf in Frozen). Having them in a scene here or there, being silly, is fine. It adds a little comedy before the adults take back over. But giving them a full six minutes all on their own reveals how awful the idea can be. With two characters that can't talk, the only thing the film can rely on is slapstick carnage, and that gets tiring quickly.

I get that this cartoon is in the vein of all the old toons Disney used to make way back in the day, a lot of slapstick and silliness, and maybe it works from that angle. Certainly if the goal was simply to entertain five-year-olds with some dumb carnage then the short succeeds. But as far as being a "sequel" to Tangled, which this was billed as in any form, it lacks. It's a diversion but hardly something I want to watch again.

Tangled: Before Ever After

Coming out five years later, in 2017, Tangled: Before Ever After is a longer film, not quite feature length but still clocking in over an hour. The intent of this one was to bridge the gap between the apparent two years between Tangled and Tangled Ever After. Didn't realize there was a two-year gap there? Well apparently there is, so let's go watch Rapunzel's Tangled Adventures to find out all about them.

Set just a few months after the main movie, Before Ever After finds Rapunzel struggling to adapt to her new life. She spent 18 years locked way in a tower and, after one big adventure, she now finds herself locked away in a different ivory tower. Due to the rules and responsibilities of being a royal, Rapunzel can't just run off and do as she likes, seeing he sights and enjoying the kingdom. She always has to have an armed set of guards with her, she has to think of the needs of the kingdom. She can't just be herself.

When Eugene proposes to Rapunzel on the night before her princess coronation, Rapunzel runs off (instead of saying "yes"), finding the new life she's suddenly settles into all too stifling. She needs a new adventure, away from the new tower she finds herself locked inside. So she runs off for the night with her handmaiden, Cassandra (Eden Espinosa), who also happens to be the daughter of the Captain of the Guards, and the two venture out past the edge of the kingdom to see the place where the Sun Flower (that gave Rapunzel her power) was found.

Around that site, though, indestructible spikes have grown, spears of black rock that jut from the cliff side. Stranger, when Rapunzel touches one of the spikes all of her magical hair grows back, shiny and blond once more (and also indestructible as well). This creates a number of issues: how does she explain to her parents that she left the kingdom? How does she hide the hair? Can she find a way to cut it? And what kind of connection is there between her and the thing that created the spikes? This is on top of a coup attempt led by the Lady Caine (Laura Benanti), an aggrieved daughter of a one-time petty criminal, who has her sights set on revenge against the royals. Will all of this ruin Rapunzel's princess coronation?

There are a number of things we have to touch upon with Tangled: Before Ever After but the first is that we have to acknowledge that this "film" is really just the pilot movie for the TV series, Rapunzel's Tangled Adventures, to follow. In that regard it's really less it's own self-contained story (as not all the plot threads are answers by the time the film ends, like what about Rapunzel's hair) than an overly long episode. If you watch the film you have to decide if it's even worth it to continue on with the TV series to follow and, frankly, for me that answer was, "no." 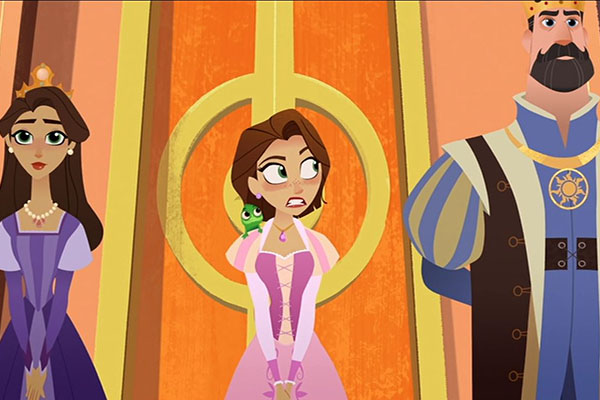 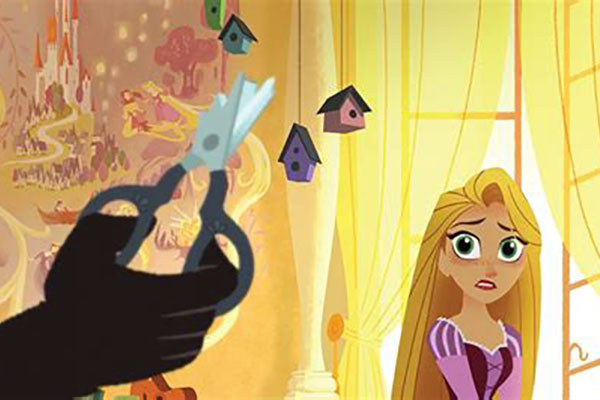 The film isn't bad, per se, but it's certainly not great. The whole cast of voice actors does return for this film, Moore and Levi included, and that not only gives a solid sense of continuity here but it also benefits the series. These are good voice actors and however trifling the plot may be, the voice cast does their best to sell the material. It' just that everything else about this film doesn't really work as well as it should, leaving it feeling pretty hollow all things considered.

To start, the animation wasn't done by the main Disney Animation Studios, instead farmed out the television animation division. Scrapped is the lush 3D visual animation for a flatter, albeit decently stylish, 2D/3D hybrid. The animation style does work in some ways, like any time where the characters can just stand around and talk. However, when action is called for, the animation feels too stilted and chunky. The worst parts of this adventure are, frankly, the adventure aspects because the animation has no life to it. It's a far cry from the fun action sequences of the big theatrical film (or even the Tangled Ever After short).

We also have the issue that, as an interquel, this film essentially sets up a lot of plot points that, clearly, will be resolved before the short film to follow. Will Rapunzel ever accept Eugene's proposal? Well, of course, because they get married in Tangled Ever After. Will Rapunzel find a way to deal with her hair and break whatever curse has been set upon her? Again, of course, because the hair is gone in Tangled Ever After. Will the kingdom get overthrown by these ruffians and their leader, Lady Kane? Of course not, because the kingdom is still standing in Tangled Ever After. All the energy is sucked out of the adventure when you know there's a sequel that resets everything back as it was after the fact.

There are also little plot details that don't really work for me. The princess is getting coronated, a practice that wasn't exactly popular even when it was performed -- old kingdoms of the 11ths and 12ths centuries would coronate the "heir apparent" to avoid issues in the line of succession, but that practice was quickly dropped so it's doubtful Rapunzel would have to be coronated as "princess" (and that ignores the line of succession issues having a Queen would cause back in the days when a coronated heir was actually a thing). Also, to get all her men into the castle to have their coup attempt, Lady Kane has them all commit crimes so they'll get thrown in the royal dungeon, and then she releases them herself. Except, dungeons generally weren't kept at the castle proper since, you know, if prisoner escaped they could then go and try to kill the king. There's a reason the Tower of London was across the city from Buckingham Palace, for example.

Yes, it's a silly little kid's trifle and I'm likely overthinking the plot machinations, but that's my job here. It's little things but they matter, and if these details are wrong here simply to "gloss over plot", what kinds of issues would I have with the series to follow. It just doesn't work for me. Again, I don't think the film is bad but I don't think it's good, either. It was a tolerable experience I won't sit through again, that's for sure, and as far as selling viewers on watching anything more in this particular made-for-TV line, Tangled: Before Ever After fails in that regard spectacularly. Once this little trifle is over I doubt you'd want to stick around further.