I'm of two minds about Pocahontas II: Journey to a New World, to be perfectly honest. I've learned over the years writing for this site that I'm actually fairly picky about sequels. They need to have some justification for existing. You can't just tell the same story again, you have to have some justifiable reason for its existence. A sequel that can't reasonably explain why it matters isn't much of a sequel. Most sequels fail because the story that had to be told was cleared up in the first movie and, at that point, there's nothing left for the sequel to do except squeeze a few extra bucks out of a known name. 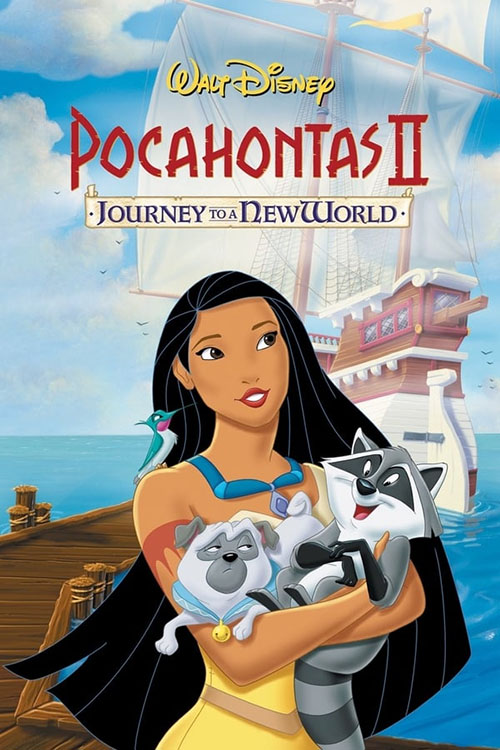 Generally the sequels to Disney PrincessesReleased in 1937, Disney's Snow White was a gamble for the company: the first fully-animated, feature-length film ever created. It's success lead to the eventual creation of the Disney Princess franchise, which has spawned 13 main-line films and multiple spin-off movies and shows. properties are bad. While they may not be horrendous on any great level, they don't generally have a reason for why they exist. Pocahontas would be that rare exception insofar as it was based on a real story and there was, legitimately, more the life of Pocahontas than was summarized (poorly, I will add) in the first film. A sequel could actually have been a good idea as it could have told her continuing tale as she went to England and did a kind of cultural exchange. That's a sequel that could have been, well, if not good at least legitimate in its own regard.

Credit to Disney, the creators of Pocahontas II did use the real events of Pocahontas's life -- her travels to England, her love with John Rolfe, her death via tuberculosis (or maybe smallpox), the birth of her child (well, okay, not those last two bits) -- to create the story of the sequel. The problem is that, like the original film, the events of the sequel quickly diverge greatly from actual history. In fact, this sequel veers so far away from reality that having any small child (and many adults, let's be honest) watch the film would do a disservice to the actual history of what happened. Essentially, while bearing the name "Pocahontas", this sequel is as fictional as any fairy tale princess story Disney has ever released, while being just as unbearable as most of their direct-to-video fare.

The film opens some months after the events of the first movie. John Smith (Donal Gibson, brother of human waste receptacle Mel Gibson) is in England, having a nice night when royal guards come to arrest him. Apparently Governor Ratcliffe (David Ogden Stiers) managed to catch the ear of King James and spin a tale of how it was Smith, and not Ratcliffe, who was the traitor. With the king's blessing, Ratcliffe has Smith (seemingly) killed, and then begins work on building an armada to invade Virginia and get the gold he swears is there among the natives. Meanwhile, across the pond, Pocahontas (Irene Bedard voice, Judy Kuhn singing) oversees the peace between her people of the Powhatan tribe, and the settlers at Jamestown. When Lord John Rolfe (Billy Zane) comes ashore, he greets her, and then her father (Russell Means), with a request that the leader come back to England to meet the King. It's Pocahontas who steps up and agrees to travel to England.

Once in Merry Old England, Pocahontas marvels at the sights around her, having never seen a city (let alone a kingdom) so big. The king, however, has no intention of meeting her, what with Ratcliffe in his ear, spinning tales of the "savages" in Virginia. It's only with Rolfe's pushing that the "Princess Pocahontas" is invited to the Hunters' Ball. But Ratcliffe is there, plotting to ruin the evening, setting up a celebration that would entertain the English and sicken Pocahontas: a Bear Beating. Sure enough, Pocahontas freaks out, calls everyone savages, and the king has her thrown in prison. Only Rolfe, and a very much not dead Smith, can save her, but then they still have to find a way to convince the king to free her and stop the armada, or the Powhatan tribe will be wiped out. 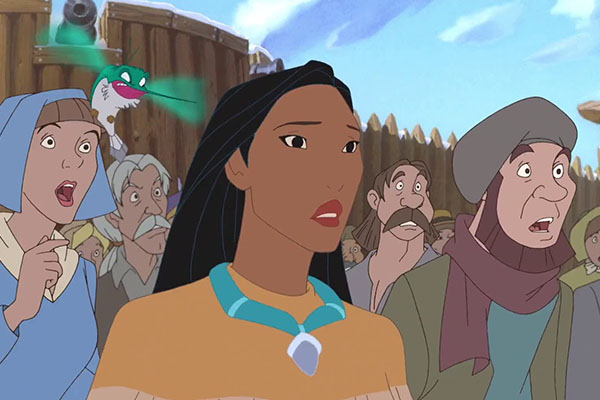 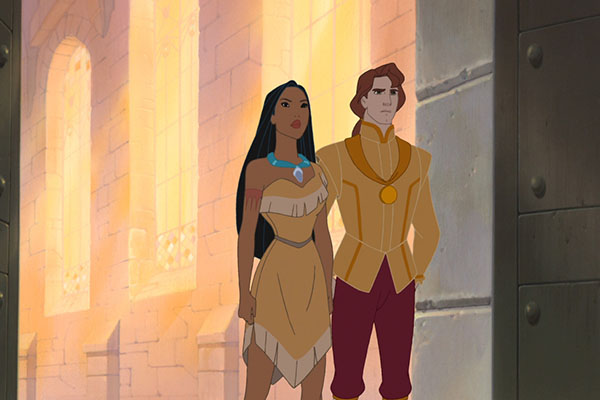 So let's cover some of the obvious historical issues right off the bat: Pocahontas married Rolfe before they went to England, not long after. Their marriage was what brokered the peace at Jamestown, and that was a peace that lasted for eight years. Ratcliffe (who really did exist) was not the treacherous man but just a very bad governor who died at Jamestown during a very lean harvest year. There was not quest for gold, and this whole talk of an armada to invade Virginia is silly. Meanwhile, Pocahontas did eventually travel to England, to see it and be a spectacle, yes. She gave birth to a son, Thomas Rolfe, and after their visit they all traveled back to Virginia... except Pocahontas got mysteriously ill and died soon after passing the Thames river. It was not a love for the ages, sadly.

None of that, naturally, is in the Disney version. What transpires is absolute fiction that doesn't even have a trace of reality left in it. About the only thing the film does get right is that Pocahontas ends up with Rolfe, not Smith, and they do travel back to Virginia (or at least attempt to). Wisely, though, the film cuts away before the princess died on the journey home. That might have been a little too real for the kiddies. Regardless, this film has as much in common with reality as Frozen does with the actual royal history of Norway.

If you can get past that, Pocahontas II is about half of a good film. The first half -- Rolfe's arrival in Virginia, his meeting the Powhatan tribe, taking Pocahontas back to England, and the Hunters' Ball -- is a decent little tale. It's quick, it's lively, and while it's not in the least bit historically accurate it doesn't grate on the nerves (at least, outside of the forced animal antics). I even found myself enjoying Uttamatomakkin (Brad Garrett), Pocahontas's native guardian and quiet comic relief. As I was watching the film I actually remarked to my wife that, "this is surprisingly tolerable."

It's after the Hunters' ball, though, that the movie comes crashing down. Instead of the controlled, if lively, film we were getting, the film banks hard into stupidity and slapstick. The prison break for Pocahontas is facile, her meeting with the king after is simple and hard to believe, and the whole climax where John and John battle Ratcliffe is an absolute mess. The entire back half of the film fails to work at all and everything that the movie did right up to that point goes right out the window. It's positively night and day. When people discuss why this film is bad it's entirely the last act that does it in. 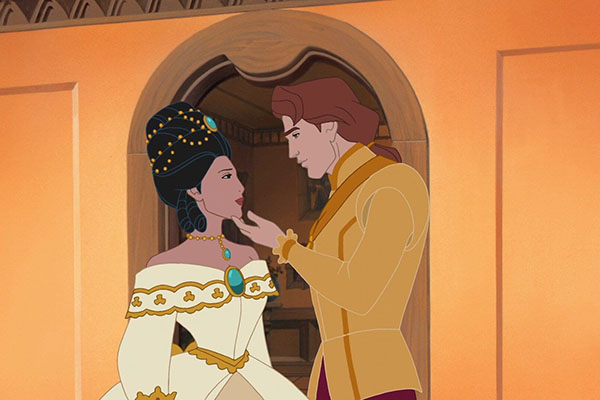 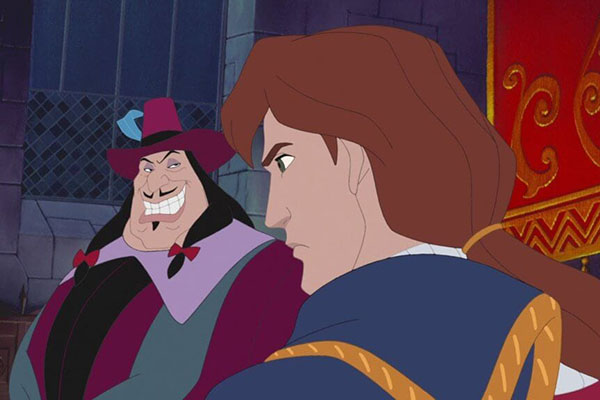 Which brings me back around to my thought at the beginning of the article. Did Pocahontas need a sequel? Well, if it had been done right it might have actually worked. A film that tried to put in some of the history, crafting a tale of peace, prosperity, and a mingling of cultures could have been good. Hell, a film that took the (very fictional) front half of this movie and came up with a last act that worked could have also been good. It wouldn't have been historically accurate but it would have at least been watchable. What have here is none of these things and, in the end, it completely negates any need for its own existence.