Not Even Voodoo Can Save This Film

The Princess and the Frog

The rise of Pixar (starting with Toy Story) and then the success of Dreamworks Animation's own CGI animation studio (starting with Shrek) could be marked as the end of the traditional, 2D, hand-drawn animation era. Disney had found great success over the years with their hand-drawn output, creating many masterpieces back in the day and then finding another era of success during the "Disney Renaissance" (Little Mermaid though The Lion King), but CGI animation was a whole different ball game and it was one Disney wasn't initially successful at. 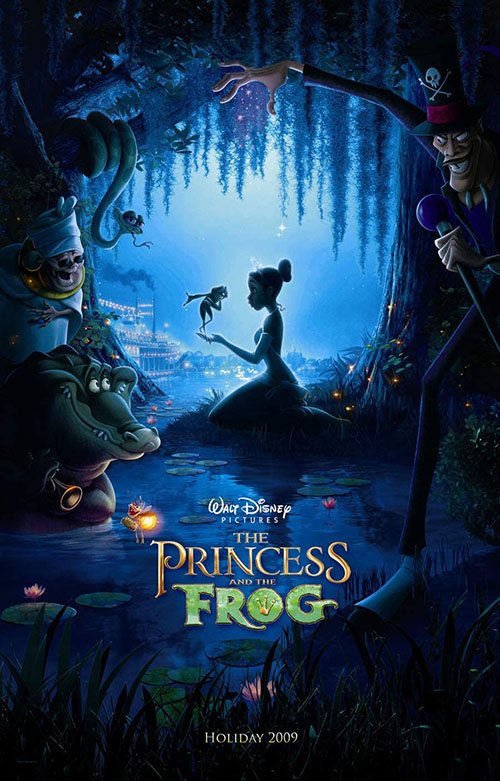 Their initial output in CGI animation -- Dinosaur, Home on the Range, Chicken Little, Meet the Robinsons, Bolt -- weren't huge successes, and while all of them broken even with their initial production budgets it's likely most lost money when it came to advertising (and lackluster toy sales). Disney found themselves at a crossroads: continue trying to make CGI animation work (which they would, to better success, with Tangled) or go back to hand-drawn animation and make it work. They went with hand-drawn animation for the next film, 2009's The Princess and the Frog and, well, if we're being kind the results were mixed.

Let's be clear that the film is very pretty. Using Disney's traditional animation style (which could, in this era, be described as a hybrid form on CGI effects on backgrounds along with hand-drawn animation and background elements), the result is a film that look quite nice. The animation's feel is a throwback to classic tales, from The Jungle Book through The Rescuers, but it does look very Disney, to be sure. Structurally, though, the film really just doesn't work. It's a pretty piece of messy storytelling that never manages to get itself going in any meaningful way.

The story focuses on Tiana (Anika Noni Rose), a young woman working every job she can so she can scrape together enough money to make a down payment on a building. He dream: to open up a restaurant serving the Cajun and Creole food her daddy taught her to make (and which she's improved on over the years). Tiana runs herself ragged, avoiding all the fun she could be having so she can get her money together, and as fate would have it, she just might be able to get her restaurant after all when her best friend, Lottie (Jennifer Cody), throws a ton of money at Tiana so that our heroine can bake the biggest batch of her beignets for Lottie's Mardi Gras feast. Suddenly she has all the money she needs.

Or so she thought, but while working the party the land owners tell Tiana that another offer came in, over-bidding Tiana. Unless Tiana could get the money together, and quick, she'll lose her dram spot. Saddened, Tiana simply wishes she could find a way to get her life back on track. That's when a talking frog comes up saying he could help her if she would just give him a kiss. The frog, Prince Naveen (Bruno Campos) needs the kiss of a princess to break his curse (and in costume Tiana looks like a princess), and then he says that he'll give her the money for her restaurant in return. She agrees and kisses the frog, but this only serves to turn her into a frog as well. Now the two people-frogs have to go on a mission to find a way to change themselves back and, in the process, find a way to save Tiana's dream. 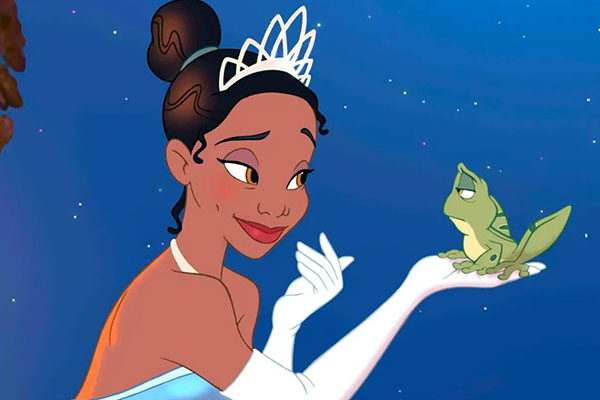 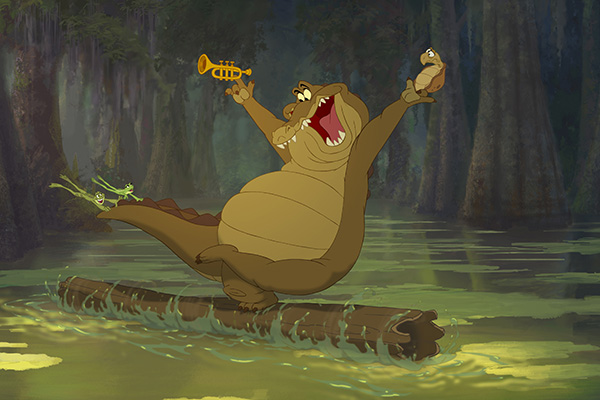 So there are a number of things wrong with the film but the first, and largest, is that Tiana doesn't actually have an arc in this film. yes, she gets turned into a frog and has to find a way to get back, but this transformation doesn't actually teach her anything about herself or make her reassess her life goals. She's a hard-working woman focused on her career before the transformation, and she's a hard-working woman focuses on her career after as well. The only thing that changes is that she finds a man that makes all her dreams come true (after she falls in love with him).

Arguably Naveen has more of an arc in this film than the titular princess. He starts the movie as a shiftless layabout, a prince kicked out of his home kingdom by his parents because he wouldn't get a job or do anything other than play on his banjo. They want him to make something of himself, so they send him away and he ends up in New Orleans. His transformation into a frog spurns him on to find someone to help him, and when he has to go on an adventure with Tiana-frog, suddenly he finds someone, and something, worth the hardship of actually stepping up. Thus, Naveen goes on a journey and comes out a more complete person. The film is Tiana's tale, but it's Naveen that actually functions as the protagonist.

I think that's a large part of the reason why this film feels like such a dud. It has no energy to it because our lead character, Tiana, is already a full and complete person. Instead of going on a journey to find herself she simply rides through a series of (honestly, quite annoying) skits until, blissfully, the movie ends. Nothing that happens to her has any impact on her life and, thus, it has no impact on the movie as a whole. It all exists to drag the film across its theatrical runtime and, well, that's it.

Surrounding Tiana is one of the most annoying cast of characters I've seen in a Disney film in some time. Naveen isn't really a great character for most of the film, annoying and casually rude, making it hard to like him or care about his journey. Along the way Tiana and Naveen also meet Louis (Michael-Leon Wooley), a trumpet playing gator and Ray (Jim Cummings), an aging firefly that's in love with a star. Each of these has their own life-goal to meet -- Louis wants to play trumpet in a human band and Ray wants to be with his love -- but arguably they, too, only get what they want through sheer happenstance. None of the side characters have any real arcs, they just travel along until the film is like, "oh, hey, let's just give you what you want." They have annoying personalities and no growth at all. It's awful. 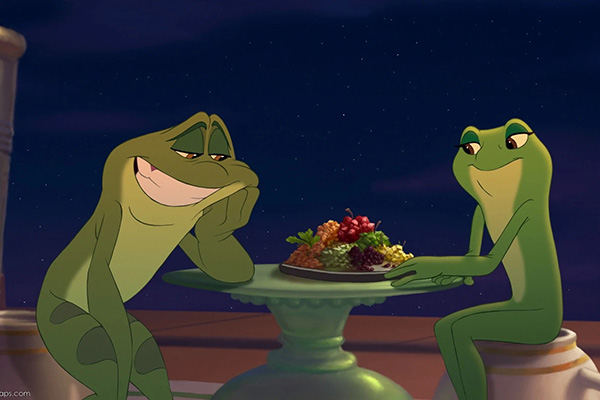 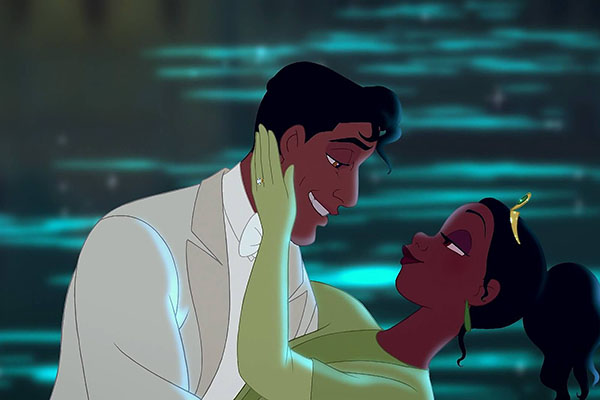 Even the songs in the film are duds. This is the first Disney soundtrack I've listed to in the princess line-up where not even one track managed to even get me mildly interested. I'm not a fan of movie musicals normally, it's true, but I can at leas find a song or two that doesn't completely suck in a film. Not so with The Princess and the Frog as I was bored by the whole soundtrack. "Never Knew I Needed", "Down in New Orleans", "Almost There", "Friends on the Other Side", and "When We're Human", you can keep them all as they all suck. Not a toe-tapper among them.

And then there's what I have to think of as the "Casual Disney Racism". This film is the first movie to start a Black princess (not the first non-white Princess, as Jasmine gained that title already, mind you) and to tell her story Disney has to place her in the most stereotypical, heightened, and over-the-top version of 1920s Black life. It's like the people behind the film said, "what's the easiest setting we can use to tell a Black story that won't offend anyone," and then chose New Orleans set just far enough in the past that they hoped no one would care. Then they threw in caricatures of Black life, an offensive representation of Voodoo magic, and said, "hey, it's a cartoon in the 1920s. At least we tried."

This isn't the most offensive Disney film, in fairness, but when you have movies like Song of the South in the library that's a really low bar to hit. Still, this is the kind of film that you know Disney focus-tested. You have to think someone, somewhere said, "hey guys, some of this stuff seems offensive. Maybe you didn't mean it to but that doesn't make it any better." And yet the film still came out as is, so either Disney didn't care or all the white people on staff somehow thought this was better than the alternative (it also makes me worry about how much worse this film could have been without focus testing).

I don't go out of my way to regularly watch the Disney PrincessesReleased in 1937, Disney's Snow White was a gamble for the company: the first fully-animated, feature-length film ever created. It's success lead to the eventual creation of the Disney Princess franchise, which has spawned 13 main-line films and multiple spin-off movies and shows. (outside of reviewing them for this site), and I know I'm not the target demographic here most of the time, but seriously, this is the first Disney movie that completely and utterly bored me (when I wasn't actively cringing at it). For all the work that Disney put in to make this film a beautiful animation masterpiece I wish they would have put that same effort into the story. There is probably a way to fix The Princess and the Frog but it would require throwing out the script and writing something completely different. And then, really, is it The Princess and the Frog anymore?