A Tale as Old as a Quick Buck

I like Disney's Maleficent. It was a solid re-imagining of the "classic" Disney film, Sleeping Beauty, that managed to change enough of the (honestly rather slight) animated film to make something new and interesting out of the bones. The success of Maleficent, though, set a precedent for Disney: they could make live-action remakes of their original animated films and people would flock to them. The fact that Maleficent gave us a new take on the material wasn't important, the fact that it was a "live-action remake" was what mattered. 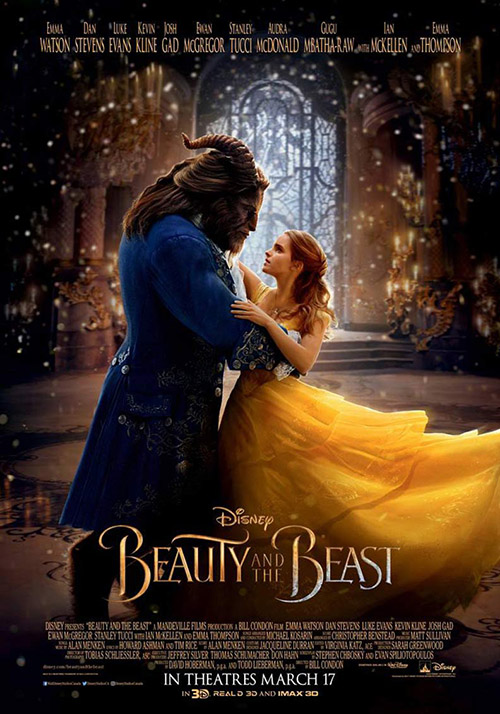 With the success of that reinvention, the floodgates soon opened. Disney had plans in place to craft a live-action remake of every one of their animated films (we've already covered The Lion King, Aladdin, and Mulan, and that's only scratching the surface of what's come out already). Most of these remakes don't have the originality of Maleficent, and that's a pity since the rest, Beauty and the Beast included, just feel like crass cash grabs to milk a little more from a known property. It's the Disney way!

If you've seen the 1991 animated Beauty and the Beast then you know everything about this story. Belle (Emma Watson) is a young and intelligent woman living in a quiet little French town. She and her father (Kevin Kline) are the oddballs in town as they're smart, educated, and don't go in for the quiet, provincial life. Meanwhile, there's Gaston (Luke Evans), the big and burly war hero who lives in town that all the ladies of the village, other than Belle, swoon for; Gaston doesn't want the other ladies, though, as he only has eyes for Belle. The feelings are not reciprocated.

When her father is on a delivery run into the mountains his wagon is attacked by wolves. Left out in the cold on his own, he stumbles to an old castle no one remembered existed about the town. He's caught by the creature living there, the Beast (Dan Stevens) and held prisoner and it's only when Belle comes looking for her father that she finds out what happened. Choosing to stay in her father's place, Belle becomes a prisoner of the Beast but, as the two live in proximity with each other, she soon sees the sensitive side of the creature and comes to learn about him, the curse laid upon him, and the time he has left before the enchantment is made permanent. Can she fall in love with such a creature, one that captured her and made her live with him, and can her love potentially break the curse? Well, of course it can since you've seen all this before.

As noted, Maleficent changed a lot of the original story, creating something new and different from the source material. Most Disney remakes don't take the route, but at least in a few instances they try to find new ways to twist the material even a little -- the different Genie in Aladdin and enough little plot changes to keep you interesting; shifting Mulan from a musical to a (bad) wuxia film. Beauty and the Beast is not like those movies, sadly, and shares much more in common with the "live-action" remake of The Lion King; it's beholden to its own source material to a fault, giving us the exact same story all over again with little in the way of new material to make us care in the slightest. 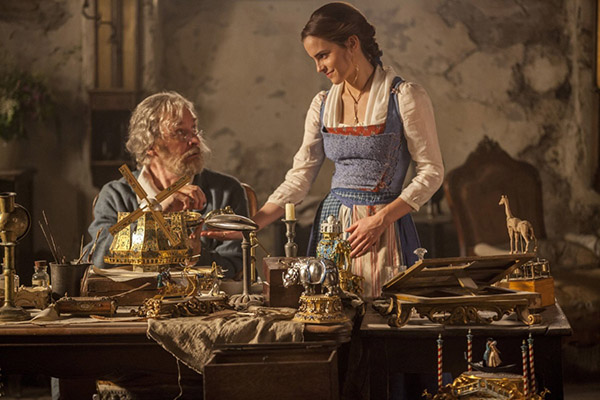 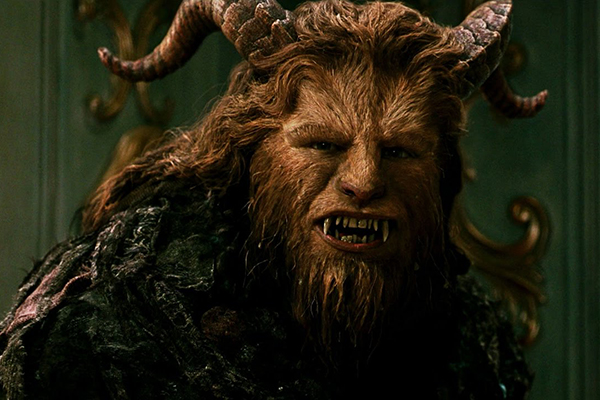 I can understand a certain reluctance to change too much -- this is a property fans love and if Disney deviated too far from the source material would it even feel like Disney's version anymore? In the case of a story like Beauty and the Beast, there was plenty of adaptations of that fairy tale out there, so when Disney makes a new version of the story they have to stick to the elements that make it a "Disney" version; there's simply only so far they can deviate. But even taking that into account, I wish this version of the film did more.

A lot of the problem comes down to how slavish it is to the source. Yes, a couple of new songs are introduced (well, "new" as in they were cut from the original soundtrack and then added into this film instead), and we do learn what her father does for a living and get to see her make her own little invention, once. But aside from maybe 2 minutes of new material, this film follows every beat of the original film, scene by scene and shot-for-shot. This is a lot like The Lion King in that regard, making you wonder just what the point of a remake was if its going to be so close to the original you could lay one over the other and see the original coming through.

The best part of the film are the actors for Bell and Gaston. Emma Watson is a fantastic actress and you can tell, even though she knows the film is just going through the motions of the original material, she invested in her version of the character. She wants to make Belle strong and independent, and she does her best to invest in the soul of the character (even as the girl is guided, on rails, through the original material). Meanwhile, Evans is phenomenal as Gaston, investing all his charisma in the character so well that, for a good half the movie, you're actually rooting for him. "He actually seems like a pretty nice guy, if a little dumb."

That actually leads us to one of the big issues with the movie: due to how slavishly it follows the original story, the version of Gaston we have here has to make an abrupt, and frankly out of character, heel turn to suddenly become the villain the movie requires. The actor invested in making Gaston something more than the big, dumb heel of the movie but this remake doesn't care one iota about any of that work. Gaston was the villain before, Gaston will be the exact same villain here, it says, and damn the consequences. 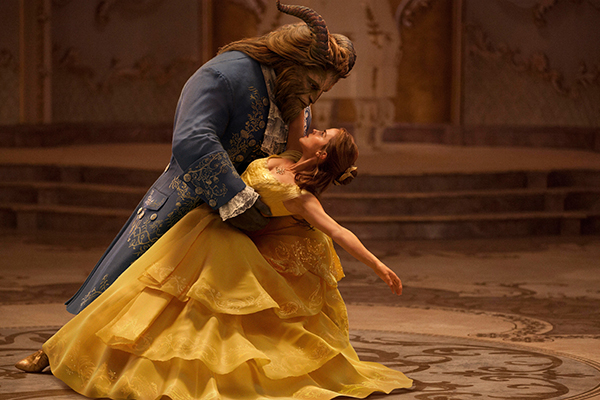 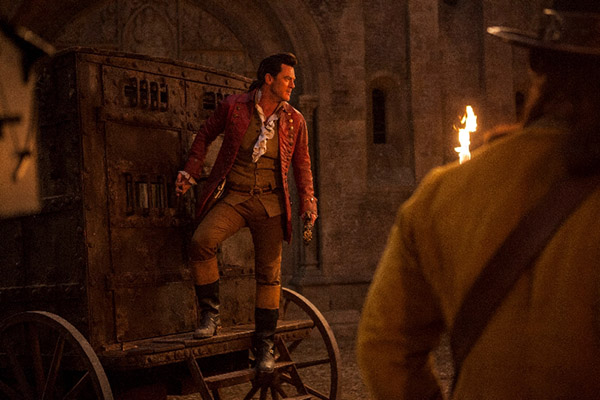 And then, for the rest of it, we just get a lot of animated characters going through all the motions of the original film, not with a Baroque aesthetic applied (as per the historical period, I assume). This film is almost as much of an animated picture as The Lion King remake, and you have to assume poor Emma Watson was acting in front of a green screen for about 85% of the film. The fact that she, and Evans, could act as well as they could under those conditions should be lauded, but it doesn't make for a very engaging movie, sadly.

Everything about this movie (outside those two actors) just feels off. The film goes scene-for-scene with the original, mirroring shots and concepts, but it lacks the love, craft, and soul of the original film. The big "Beauty and the Beast" ballroom number, which was the seeping crescendo of the second act of the original film, lacks the epic scope and emotion. It, like so much of the rest of the film, is flat because it's done by a director, Bill Condon, who's shooting off the original film instead of finding his own material. It's missing a strong core, and an eye towards originality, that could have made this version sing.

This film, like The Lion King, illustrates the big flaw in Disney's live-action plans. You can't just remake a film scene-by-scene, you have to invest in it and come up with a reason for someone to see this version over the original. There's no reason to watch this version when the animated one isn't just the same story but is also done better as a film. I guess if you've never seen the original this would be a fine movie to start with, but considering that Disney always has a copy of the classic animated film available somewhere (even if its just on Disney+), what's the real purpose of this movie. Yes, it keeps people thinking about Beauty and the Beast, and it might stretch some more life out of all the products associated with it, but on its own this movie lacks any reason to exist.

This is just a soulless cash grab, elevated slightly by the lead actors but otherwise searching for a reason for its own existence. If you really want to see this movie do yourself a favor and go back to the original. It stands, head and shoulders, about this hollow revision of the source material.