A Disney Princess By Any Other Name...

Raya and the Last Dragon

So what makes a Disney PrincessesReleased in 1937, Disney's Snow White was a gamble for the company: the first fully-animated, feature-length film ever created. It's success lead to the eventual creation of the Disney Princess franchise, which has spawned 13 main-line films and multiple spin-off movies and shows.? I ask this, not as a fan of the line (as I'm not one, the Princess stories generally not doing anything for me) but as someone trying to figure out the continuity of this supposed "franchise". True, the whole concept of the "Princesses" was a marketing ploy meant to simply tie some characters together and sell merchandise, and it's done that very well. Some of the characters originally proposed for the line, such as Tinkerbell and Esmeralda, didn't even make it into the final series. So what, then, makes the characters included "Princesses"? 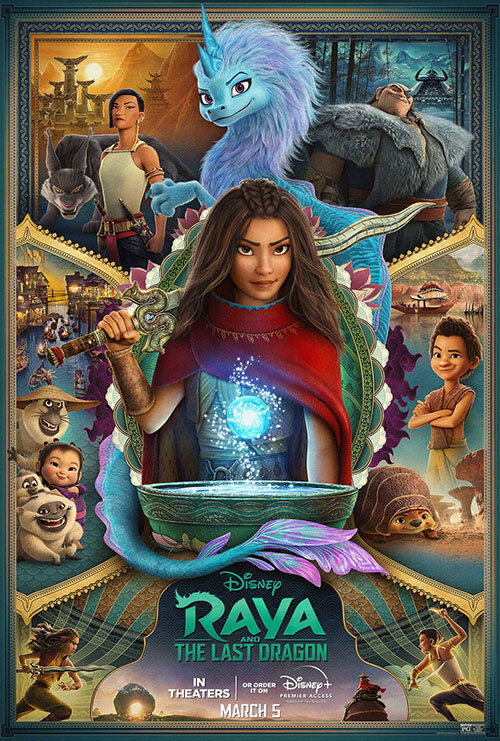 It's not a basis in fairy tales as Pocahontas gets to be in the lines. It's not that the girls have to somehow exude and air of femininity as Mulan actively rebelled against that. Hell, noble blood, however you define it, isn't a requirement either as Pocahontas, Moana, and Mulan would all be excluded (depending on how Anglo-centric you wanted to get about it). By any look at the definitions you would think that Raya would be included on the list and yet, even a year later, Disney still doesn't have her in the clutch of Princesses on their website, this despite her being the daughter of one of the five clans of her world, a magical girl who goes on an adventure to save her homeland who makes friends and learns lessons along the way. By any metric you could think of, Raya is a Disney Princess.

Well, any metric save one: unlike all the ladies who get to be on the list (Snow White, Cinderella, Aurora, Ariel, Belle, Jasmine, Pocahontas, Mulan, Tiana, Rapunzel, Merida, Anna, Elsa, and Moana), Raya's film wasn't a smashing success. All the other women had films that blew out their initial budgets but Raya and the Last Dragon barely made more than it's production budget ($160 Mil against $100 Mil). Even counting the money Disney likely made off streaming for the film, and ancillary materials, Raya likely was still a loss-leader after advertising and everything else was taken into account. Sure, her film came out at the height of COVID lock-down, but a loss is a loss in the Disney playbook.

Not that I can really blame Disney for distancing themselves from this film some, not officializing it any more than simply having it as one of their "Disney Animated Masterpieces" like very other main animated film they've done. This film is, frankly, not that great. Artistically it's a wonder, to be sure, and you can tell that that designers on this fill pour their heart and soul into every background, every graphical effect, everything they could to make this film look good. The story, though, is a total snore featuring bad dialogue, terrible characters, and a mash-up tale of "what if Avatar: The Last Airbender but with dragons?" It's a light-weight, barely there tale that hardly lives up to its feature film status. But damn, is it pretty.

As a girl, Raya (voiced by Kelly Marie Tran) was raised to be the leader of her community, the Heart clan on the world of Kumandra. 500 years before, a great blight of evil creatures (who turned anyone they touched to stone) had spread across the united world but through the sacrifices of the world's dragons humanity was saved (although all the dragons were turned to stone). The last dragon, Sisu, gave her life carrying the gem that restored peace, and for 500 years the Heart Clan defended the gem, protecting it from anyone that meant to steal it or do the gem harm. Raya's father, though, wanted the world to unite again, to not be five clans -- Fang, Spine, Heart, Talon, and Tail -- but one world once more. He invited all the clan leaders together, with their officials, and wanted to have a meet-and-greet, a get to know you to show that everyone could live peacefully together. 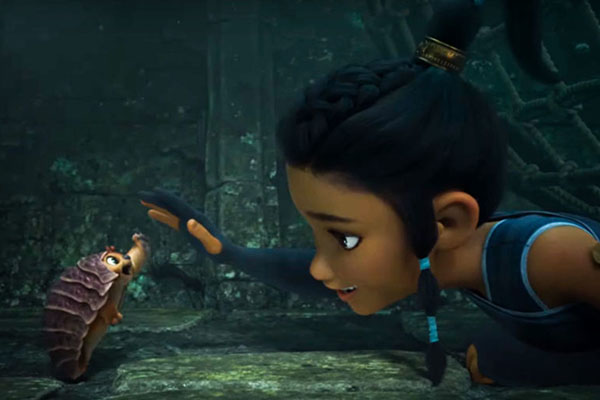 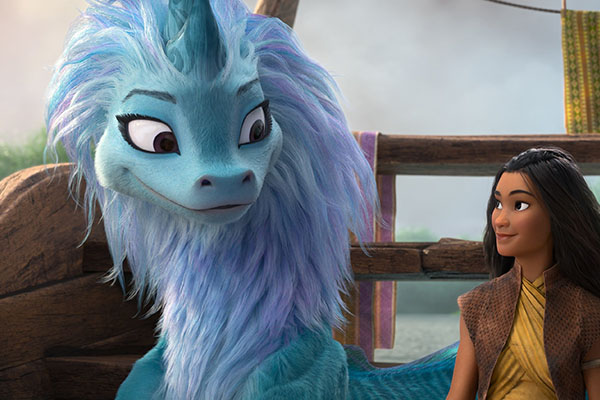 But then the daughter of the Fang tribe, Namaari (voiced as a girl by Jona Xiao, as an adult by Gemma Chan), betrayed Raya, tried to steal the gem, and caused a battle between the tribes that, in the end, broke the gem into five shards (conveniently one for each tribe). It also brought back the blight, sending terror through the world. The four other tribes retreated while everyone in the Heart Clan was left as statues. Everyone, save Raya. Six years later Raya had set out into the world, training and preparing for two things: one, to find a way to restore the gem, and two, find a way to gain the guidance of Sisu to aid her quest. But then Sisu (Awkwafina) came, as if summoned, and suddenly Raya saw a path towards saving the world via the power of the last dragon.

At it's core Raya and the Last Dragon is a simple story. Too simple, in fact, as it has the basic structure and linear layout of a bad role playing game campaign. The gem breaks into five shards, one for each territory, so obviously each clan has to have one. Raya has to go out into the world, heading to each clan, and obviously she'll pick up a stray member of the clans along the way, effectively reuniting the world the way her father wanted. None of it is expected because you can easily see it happening as the film lays out. Each "twist", each "betrayal" is so heavily foreshadowed that nothing in the film feels interesting or surprising. It's just going through rote motions towards a pat Disney ending.

A pat story would be one thing if the characters were at least enjoyable, but by and large everyone in this film is the most generic, cookie-cutter character with bad dialogue. Characters state their intentions and their feelings out loud instead of letting actions and instances naturally explain themselves. People make modern cultural references (and use modern, cultural slang) that makes no sense in the world of the film, but simply exists to make kids laugh and be "cool". And the jokes, my god the jokes are bad. The dialogue of Raya elicits groans more that giggles marking a tedious and awful time spent with the film.

That said, damn is this film pretty. All the scenes in the film are lush and interesting, taking the artistic elegance of the 3D animation that Disney has been perfecting since Tangled and notching it up to another level. It's a phenomenal treat for the eyes, making this one of the prettiest animated films I've seen in some time. The only studio making anything this attractive is Pixar which, of course, is also owned by Disney. Clearly Disney knows what its doing in the visuals department. 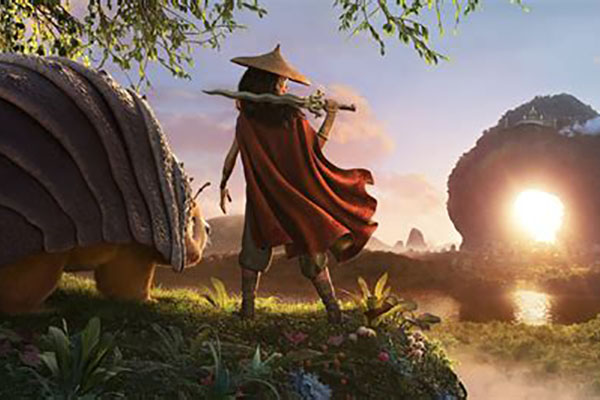 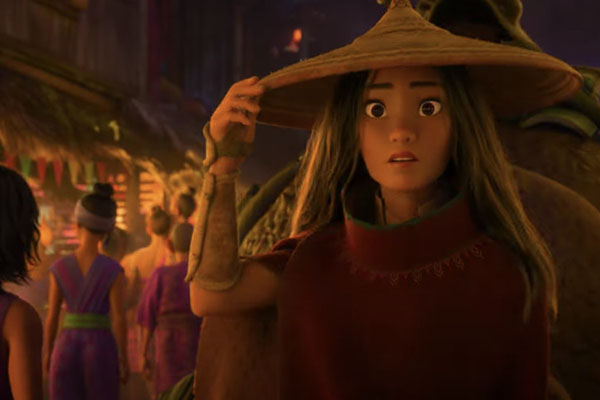 I just wish they could have made the film fun in all other respects. I appreciated that this wasn't a Disney musical, I liked the action sequences, and I really did enjoy the design of it all. This is the kind of film that I really could have liked (Disney or no) because it had an excellent sense of scene and a world that could have been really interesting (cribbed from other works or not). But man did the script drop the ball this time around. All the steps the artists took to make this an awesome film were betrayed by the writers. I'm sure there are worse animated stories out there (anything from Imagination studios or Dreamworks, to be sure), but for the high bar set by good Disney films this film misses the mark by a mile.

I'm sure there will be some younger kids that will like this film. It's lush, it's cute, it's not at all challenging. It's the kind of film an adult could put on screen assured their kiddos will sit still for an hour while their brain liquefies. But as far as good films to watch, there's much better animated fare even within the Princess canon. Raya is a marvel that shows what the animation studio could do with their assets. Now they just need to get a better writer into the studio with them.