Let's Go to High School... For the First Time

In the past I have extolled the virtues of this film. I wrote a pretty glowing review about it back after it came out as part of my oldest review site, The Domain (and that review was then repurposed, improved, and edited for the first launch of Asteroid G). Back when it came out, and for a long time after, the 2002 Spider-man was the gold-standard for superhero films, a movie that took it's source material seriously and didn't try to cover up any of the goofy sensibilities from the comics. If anything, the film Sam Raimi created played into the goofiness of the source material, play not only to the original comic's strengths, but those of Raimi as well. 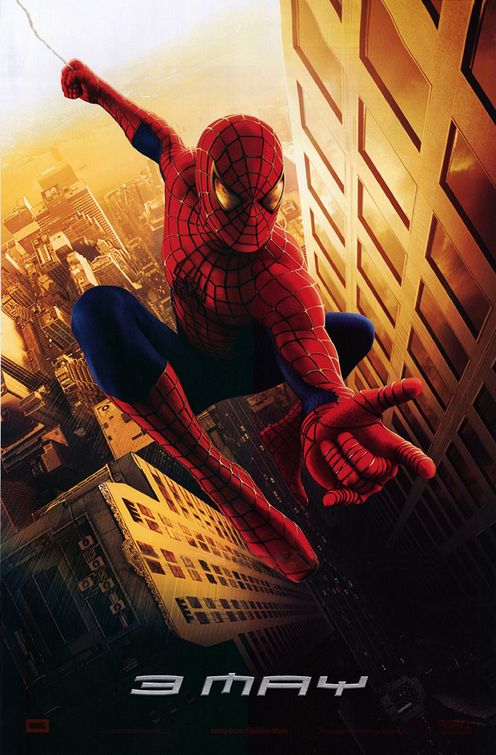 Since the movie came out, those, we've entered a golden era for superhero cinema with the launch, and continued output, of the Marvel Cinematic UniverseWhen it first began in 2008 with a little film called Iron Man no one suspected the empire that would follow. Superhero movies in the past, especially those not featuring either Batman or Superman, were usually terrible. And yet, Iron Man would lead to a long series of successful films, launching the most successful cinema brand in history: the Marvel Cinematic Universe.. Hell, after Sony's later efforts with the character fizzled out, Spidey even joined up with the rest of Marvel's main movies in the excellent Homecoming. The question then becomes: do the original Raimi films measure up? Are they as good as we remember? And let's just get the answers out of the way at the start: Yes, the films are pretty good in their own right even if, after all these years, they aren't quite as good as we all probably remember.

Starting things off with our hero, Peter Parker (Tobey Maguire), we watch as Pete navigates his days in High School. He's a nerdy guy, constantly picked on by Flash Thompson (Joe Manganiello) and the other football players, as well as pretty much everyone else in the school. He also pines for his next door neighbor, Mary Jane Watson (Kirsten Dunst), popular girl in school who barely realizes he exists most of the time. The only people on his side are his best friend Harry Osborn (James Franco), and his aunt and uncle May (Rosemary Harris) and Ben (Cliff Robertson). One fateful day, though, Pete's class goes on a field trip to a scientific institute, a place doing genetic research on spiders. Of course, one of the spiders gets free somehow, and decides to bite Peter (as they are wont to do). Soon, ol' Pete is developing spider-based powers but before he can really enjoy the a criminal kills Pete's uncle Ben, sending the teenager on a spiral of guilt of the death, making him vow to be a hero.

Once he graduates from school, he starts his career as the friendly neighborhood Spider-man. The neighborhood will need him, too, as a new villain is on the scene: the Green Goblin. Secretly, the Goblin is actually Norman Osborn (Willem Dafoe), Harry's dad and head of Oscorp. Due to a wildly dangerous experiment, Normal goes off the rails, murdering, performing terrorist attacks, and flying around on a custom glider, threatening the city. It's up to Spidey to do something about it before the Goblin lays waste to all Spidey holds dear.

As noted, Spider-man treats Pete and his story pretty seriously. There's no trying to tamp down the comic book source, no putting the character in a dull, black suit and making him be more realistic (i.e., the original X-Men films). No, Pete gets to spend his time learning his powers, doing goofy things with webs in his room and just basically being a kid with super powers for a good chunk of the movie. Even when he's out bounding around the city, he gets to keep his iconic red-and-blue suit, enjoying his time as he swings and pounces around town. 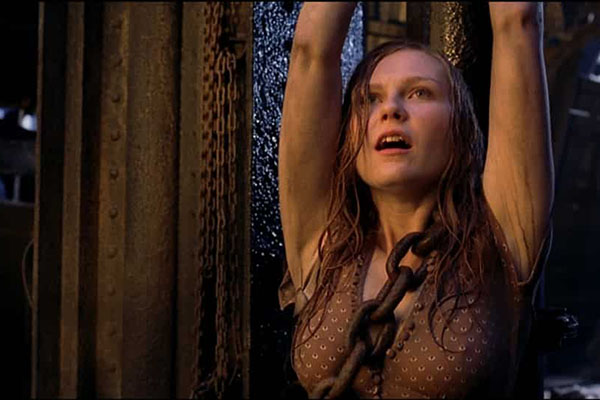 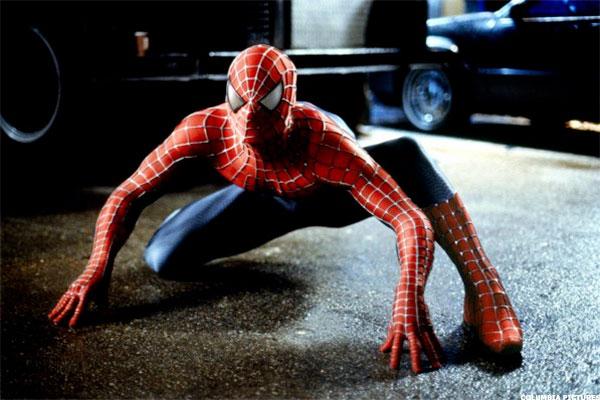 If anything, Raimi (a lover of slapstick and goofy comedy) plays up the comic book roots in the film. There's plenty of strange touches, moments of pure silliness and camp that almost feel like the film was getting in touch with the 1966 Batman television show (thankfully without all the "Bams" and "Pows" of that classic series). Even the costuming played up the camp qualities, with Green Goblin especially looking pretty silly in his full-body Power Rangers-style suit.

Not goofy, though, were the performances. If anything, Tobey Maguire was a little too serious in the lead role, giving a fairly reserved performance as Pete. Spider-man is a chatty dude in the comics, bantering with anyone he can as he swings, punches, and kicks his way through the city's underworld. Here, though, Spidey barely banters at all, being much more dour, more melancholy than the Pete of the comics (or the later Homecoming). A little more "aw, shucks" and "gee whiz" in the performance would have gone a long way to sell the then mid-twenties Pete as a high-school kid, as well as giving his Spider-man some of that humorous charm he so desperately needed.

Much better, though, is Dafoe as Norman Osborn. It's no joke to say that his villainous performance is at it's best when he's out of the damn suit -- the Goblin garb covers most of his face, leaving him with just body language to convey menace (he's able to, but not well). It's when his face is uncovered, and Dafoe is able to truly inhabit the role, that the Goblin comes to life. There's real menace as Dafoe "Gollums" his way back and forth between Norman and the Goblin, listening to the voice in his head and his face contorts into a terrifying visage. Dafoe is the best part of the movie and it's just a pity more screen time isn't devoted to him.

Rounding out the main cast are the largely bland James Franco, the decent Dunst, and the tolerably bland Harris. Of the three, Dunst comes off best simply because she gets more screen time and a better range of emotions. Or, maybe, she's just a better at acting than Franco -- his Harry Osborn mostly just looks pensive and uncomfortable in all his scenes, a guy that looks one minute away from crapping his pants at any time. Compared to that, anyone is going to look like a winner. 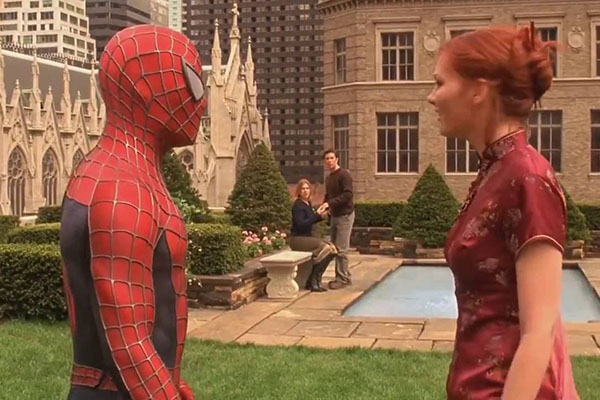 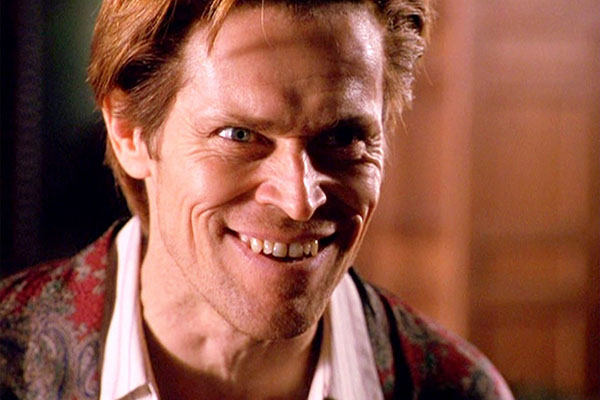 Outside the character drama, the movie really comes together during the action moments. Raimi, of course, has a good eye for action (or, at least, action as filtered through a slapstick lens, as evidenced by the Evil Dead movies). While he might not have been my obvious choice to direct a Spider-man movie (Cameron was once attached to the project, and I certainly could have seen him in the director chair), Raimi brings a fun energy to the film. He directs everything in his own style, using cuts to emphasize actions, and then accenting them with SFX and zooms. Raimi has a style all his own, a heightened kind of action directing that works in the heightened world of comics.

Certainly, the action is miles above so many other action films (including the recently released Venom) as it's actually comprehensible and easy to follow. The battles between Spidey and Goblin are quick but satisfying, beats that punctuate the movie and push the story forward instead of just serving as rote scenes to get through before we go back to the story.

Hell, if anything holds the film back it's that there simply isn't much of a plot in the back-half. Once Pete and his friends are out of school, the story essentially becomes "the Goblin is bad and Spidey has to fight him". Sure, there's a B-plot about the love-triangle between Pete, MJ, and Harry, but considering how back Franco is in this movie, he doesn't really hold up his part of that story, so there's never really any thought that MJ might actually choose him in the end. It's barely a blip in the movie, something to cut to between appearances by Dafoe.

What the film really needed was a bit better casting. Much as Maguire could invest in the sadness of the character, he didn't really get Spider-man. Meanwhile, anyone would have been a better choice for Harry than Franco. If those two could have been swapped out, Spider-man might still sing. It's a good movie held back by a couple of performances that have only aged more poorly in comparison to the great MCU film that's come out since. Taken on its own, the 2002 Spider-man is great fun. It just has to be better at this point since so many bigger movies with better casts have come out in the superhero genre since.