Three Is (More Than) Enough

Now we come to it. The point where the Spider-man movie franchise went right off the rails. Although movie one and two were warmly received by critics and fans, there aren't that many people that extol the virtues of this third, and final, entry in the Sam Raimi-directed film series. Sure, there are some that try to argue it's "not as bad as people say", but generally those discussions are done with a whole list of caveats. For all but a select slice of the viewing public, Spider-man 3 is treated as a red-headed step-child of the series (played, of course, by a blond). 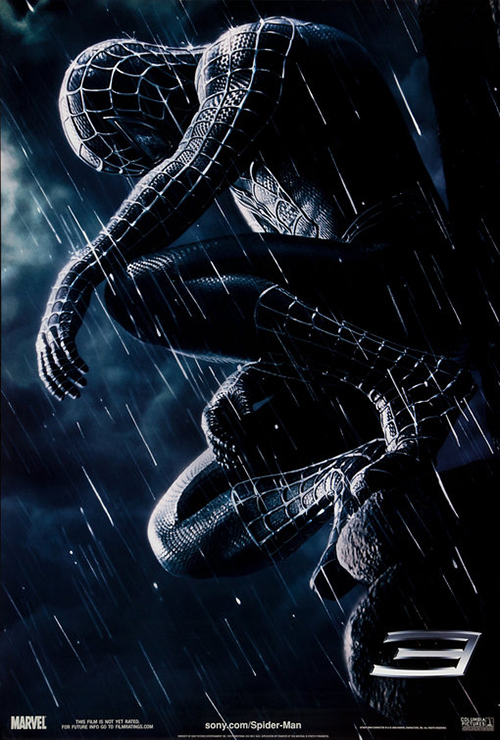 Of course, going back through and watching all these movies, I had to see if this reputation really was deserved. I remembered not liking the film back when it was in theaters, and even though I'd bought it on DVD after it came out, I never actually re-watched my copy. So, for 11 years now, this DVD has sat on my shelf, in it's original shrink-wrap, collecting dust. Since it wasn't a collector's item (no one cares about Spider-man 3, now seemed like as good a time as any to rectify this and give the film a second chance.

Picking up sometime after the events of Spider-man 2 (although when, exactly, isn't entirely clear), we join Peter Parker (once-again returning actor Tobey Maguire) as he's swinging around as Spider-man, hero of New York and toast of the town. While his star is on the rise, the star of his girlfriend, Mary Jane (Kirsten Dunst once again), is on the decline. Her part in a new play is cut after every single critic roasts her performance, and to make ends meet she has to take a job as a waitress/jazz singer at a dive bar. The two lovers hit a rough patch, which is only exacerbated by Harry Osborn (James Franco, of course) who has it out for Peter (blaming him for the death of his father, Norman Osborn, back in the first film). Harry works to break the two up, to isolate Peter and cause him as much grief as he can before attempting to kill the wail-crawler.

Those aren't the only troubles facing Peter, though, as he's also dealing with Flint Marko (Thomas Haden Church), an escaped con who, apparently, really was the murderer of ol' Uncle Ben back in the first film -- oh, and Flint becomes the Sandman. Peter also finds a new, black suit which is actually a symbiote that heightens not only his powers but also his aggression. Plus he's dealing with another photographer at the Daily Bugle, Eddie Brock (Topher Grace). And, of course, Harry will come back again and again under the guise of Green Goblin II. There's almost too much for Peter (and the audience) to keep track of.

I praised Spider-man 2 for taking a restrained approach, not over stuffing the movie with villains as so many superhero sequels will do. That film put the focus on story over merchandising extra toys, and it was stronger for it. Spider-man 3, though, has no such qualms, giving Peter three different villains to fight (not counting his own dark side while under the control of the symbiote), none of whom get the kind of focus they really deserve. Each of them, though, could easily sell toys, making it pretty easy to see why there were so many villains in the piece to begin with. 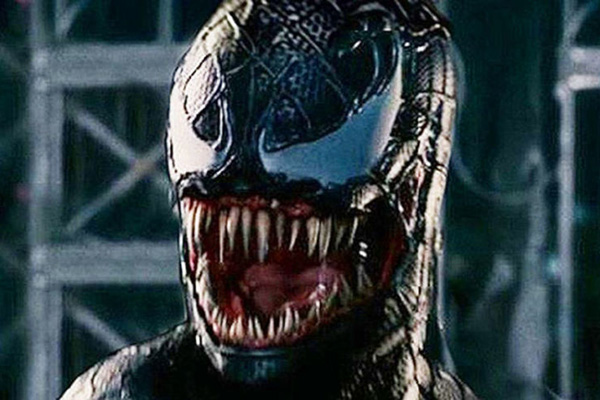 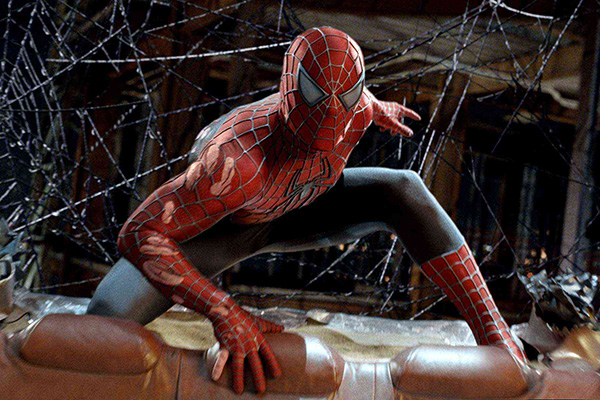 The villain that gets it worst is Venom. The symbiote itself is decently established, with Peter going through a "dark phase" while under the influence. However, Tobey Maguire is too much of a dork to be able to bring any "darkness" to the role, and whether by his own acting style or something Raimi was going for (Peter is a dork, so aggressive Pete would be an aggressive dork), "Dark Peter" just never gels together.

The symbiote doesn't really become "evil" until it's under the guide of Eddie Brock, but by then the movie is almost over so we barely get a sense of whom Venom is before the movie ends. Was the symbiote controlling Eddie? Was Eddie controlling the suit? Were they even really Venom (since the name was never officially used in the film)? An entire movie could have been done about the rivalry between Eddie and Peter, a much better, more successful movie than the one we got, certainly. Maybe they had thoughts to setup a larger Venom story in a theoretical fourth film in the series, but that never happened.

Sandman really doesn't fair much better, largely because he doesn't have much of a story. His whole plot line is his guilt over accidentally killing Uncle Ben. There's nod towards him robbing banks to save his dying daughter, but she only sows up once in the movie, early on, and then disappears, a plot point to be raised but not a real person. Of course, then Sandman disappears for whole stretches of the film so we can follow Peter's "dark voyage", so it's not as if Sandman really had anything interesting to do here, either.

And, of course, there's Harry Osborn. He's given more to do here, a villain role as his works against Peter whenever possible. Maybe this plot line could have worked if James Franco wasn't in the role as his Harry Osborn is still a total bore. But then, the film doesn't seem all that interested in him either, shunting him to the side constantly to explore every other plot line, bouncing back only to give us an action beat and remind us that Harry actually exists. Harry's just there to move Peter forward, not to be his own person. 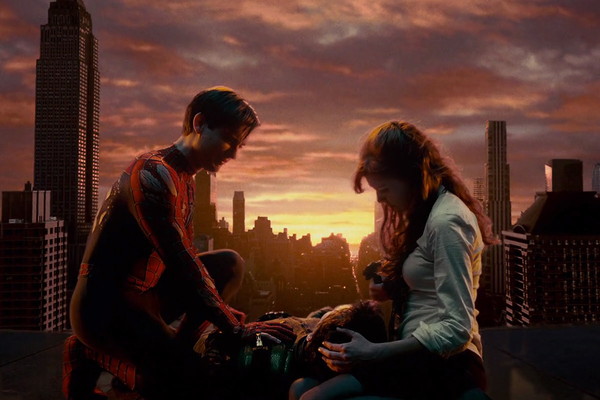 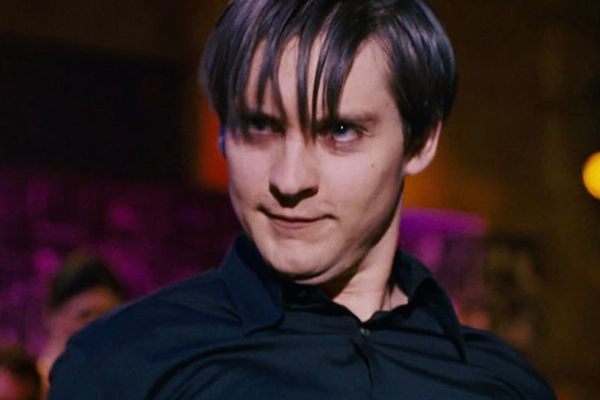 But then, if we're really going to talk about people the movie treats like pawns to service the hero then we have to look at every female character in the film. Gwen Stacy is included in this film (played by Bryce Dallas Howard) but she's just there to add tension to the Peter/Mary Jane plot line Hell, the movie even calls it out at one point when Dark Peter takes her out on a date to rub it in Mary Jane's face. The movie, however, doesn't get any credit having Gwen realize she was just a pawn because it's not as if anything further is done about it -- she calls out the film and then completely disappears from the story. She still gets treated better than Betty Brant (Elizabeth Banks) who just flirts with Peter once to somehow sell that he's suddenly a ladies' man, and then she too disappears for the rest of the flick.

None are treated worse than poor Mary Jane, though. The film begins to give her a plot line -- her failing career -- but then after about a third of the runtime the film gets bored with her and just moves her around to act as a pawn for Peter's own story. He needs a goal to become a better person, so let's bring in Mary Jane. Oh, the villains need bait to lure out Spidey, so let's bring in Mary Jane. She never solves her problem, doesn't get to be in a new play, because this isn't her story so who cares what happens to her career? Spider-man 3 certainly doesn't.

The biggest issue I have, though, is that nothing that happens in the movie is of any real consequence. By the time the movie ends, Peter and Mary Jane are right back where they started when the movie began. They haven't moved forward at all in their relationship or their life, so what was the point of the whole adventure? There's little of actual consequence that happens in the film. When the credits roll, you're left wondering "what was the point of all that?"

Well, it probably sold a lot of toys. It certainly didn't entertain me (as I fought to watch the film instead of looking at my phone the whole time). It wasn't fun, it wasn't exciting, and it wasn't memorable; it was just a tedious exercise in wheel-spinning. Spider-man 3 has a reputation for being the worst of the Raimi set, and I have to agree with that. This time, when going back and watching a reviled movie, I fully agree with the general consensus: this movie sucks.