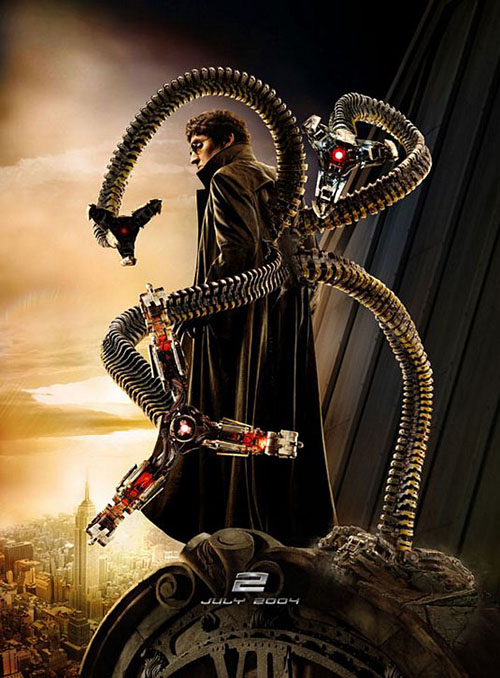 It's been a little while since Peter Parker's last big screen adventure. Life hasn't exactly been kind to him over the last few months. He's broke, he's over-worked, and he doesn't have a girl. He can't keep up with his school work, and is in danger of flunking the classes he really cares about (and presumably needs for his degree). Things keep getting worse and worse, with more and more stress piled upon him.

Then his powers fail, all at once. Instead of seeing this as a bad thing, he sees an out. He doesn't have to be Spider-Man anymore. He can be his own man again. Have the time to focus on what really matters: school, work, girls (I agree on that last bit).

Meanwhile, in a lab elsewhere in New York City, Doctor Otto Octavius (a brilliant scientist) works on a way to create some kind of cold-fusion-like power generator. Sadly, the machine fails, killing his wife (who was also a sort of lab assistant). The resulting lab accident also leaves him with metallic tentacles grafted to his body (they were there to help him control the fusion experiment -- and we see how well that worked). Under the influence of the tentacles (who have a controlling, evil AI built into their functionality) seeks to fix his past mistakes, completely blind to the simple fact that his machine will destroy the city... maybe even the world.

A lot of people hail this movie as the greatest thing since sliced bread, let alone the greatness of the Superman series (which I tend to think aren't as great as everyone makes them out to be). I'm in a minority, as I don't think Spider-Man 2 is that great a superhero movie. It's good, no doubt, but not the absolute in superhero cinema. Like many movies in the genre (and cinema in general), what we have on screen isn't as good as what could have been there with just a little tweaking.

For starters, Doc Ock is barely ever on screen.We hardly ever see Otto, and when we do, he's just there to act menacing for a few minutes, and then to scamper away on his metal tentacles. We're so focused on Spider-Man (granted it is his movie) we never really get to feel anything for his character. He has no character development (just "look at me, I'm an evil man with metal tentacles), and no plot outside of "I think I'll make a Doomsday Machine, dum de dum..."

In comparison, the Green Goblin (played by the always fantastic Willem Dafoe) had a lot of screen time in the first flick. He was actively menacing -- not a bit player in someone else's action sequences. More important, the main plot line was him and Peter. You got to see him in the context of other characters, have him interact with people around him, not just his decision to be evil one second, and then disappear for chapters at a time.

However, Peter is a different matter. I like the way they made his character grow. He didn't choose the be a superhero, and there are obviously a lot of problems he has to deal with. On the flip side, he doesn't seem to get any joy out of being a hero. I know, this is his low period, but even when he becomes the hero we want him to be, the fun is sucked out of it. My favorite moments in the first flick were where he was just swinging and having fun being special.

The action is intense though, make no mistakes about that. Some of the sequences are jaw dropping, and I truly was on the edge of my seat. There's not real emotional connection (sadly), but there is a physical reaction.

All in all, this movie is limited in my mind by what I wish they would have done differently. More with the villain, more connection to the characters, would have elevated this otherwise decent movie.