Although I tend not to talk about it much (like, at all), I spent a short period of time as a Cub Scout, the younger boy part of the Boy Scouts. I can't remember why I did this -- I think it was to make friends, but I ended up hanging out in a troop with boys I didn't like that, earlier in the day I saw at school and liked them just a little then -- but suffice it to say my time as a Cub Scout was short lived. I hated all the activities, not being one that is prone for the "outdoors experience", and pretty soon bailed after achieving a total of zero merit badges. 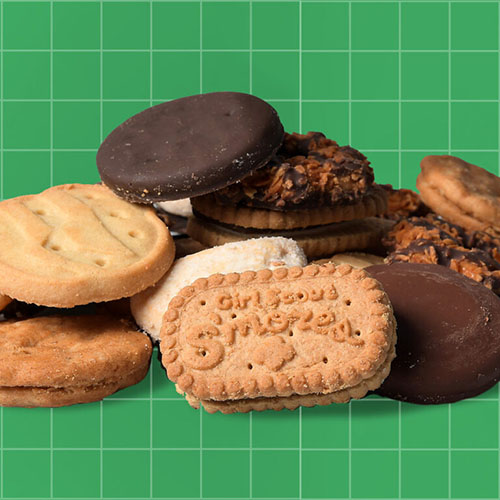 One of the things the Scouts had us do, which I hated quite a bit, was going around on fund raising drives to drum up money for our troop. This was stupid because if I wanted a job I would just go out and get a job (so said my 10-year-old self). No one likes going door-to-door selling magazine subscriptions or wrapping paper. Hell, no one likes going door-to-door. Still, had we had anything on par with Girl Scout Cookies it might have been a little easier to make sales.

Girl Scout Cookies are a cultural touchstone at this point. Who hasn't bought a box of these snacks and slowly worked their way through a whole sleeve faster than they really should have? Everyone will point to specific types they like but we can all agree that, in general, Girl Scout Cookies are damn legit. I had a couple of boxes (okay, let's be honest, way too many boxes) that I bought recently and, having seen reports of new cookies coming out, I felt it was time to finally look back at what I ate and relish the good times that were had:

Every year I buy Thin Mints. These are my base line cookie whatever else I get, it has to stand up to the amazing deliciousness that is the Thin Mint. Most people love Thin Mints and its for good reason: these have just the right level of flavors and mouth feel to really carry the cookie. They are an experience many others have tried to replicate (such as Keebler and the Grasshopper cookies) but few have managed to find just the right level of perfection as the Thin Mint.

At its core, a Thin Mint is a crisp chocolate wafer cookie, flavored with mint, that's then wrapped in a chocolate coating (or, at the very least, "chocolate-derived" coating). What you then get is a lovely, crunchy bite of mint and dark chocolate that really comes together so well in the mouth. The wafer isn't too dry, the chocolate sweet but not cloying, and it all just really works so well well together. I normally don't eat cookies outside chocolate chip but if I stray then I stray for Thin Mints. 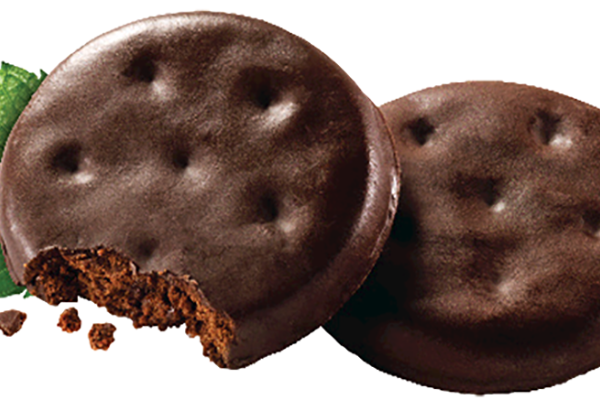 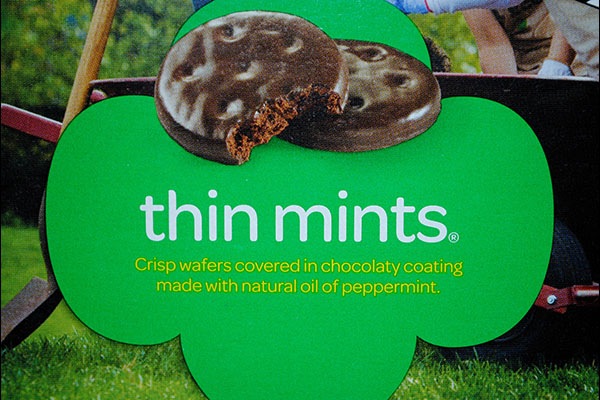 Frankly these cookies are too good. They have just the right bite size to them that if you really wanted you could shove an entire cookie in your mouth and just chew. I know, I've done it. While I can't normally eat a ton of sweets at once I can easily find myself finishing off a sleeve (of the two in a box) of Thin Mints, putting more fat and calories into my body than I care to admit. And you know what? Worth it. When you get Girl Scout Cookies you absolutely have to have a box of Thin Mints in your cart.

Now, worth noting, there's anew companion cookie to the Thin Mint. The Scouts recently announced the Raspberry Rally, a raspberry version of the treat with a wafer infused with (artificial) raspberry flavor and then coated in chocolate. Like a Thin n' Fruity, this cookie very well could get added to my cart next time, and then every time, if it holds up to the hype. Once I place my next order of cookies we shall see...

Two years ago when I picked up an order of cookies I was told the Toast-Yay! were the new thing. The scout said, "they taste like French toast", and that was enough to get me interested; I mean, who doesn't like French Toast? Savages, that's who. Then the next year they came out with Lemonades, which was like Toast-Yays but with Lemon flavor instead of maple syrup. Again, who couldn't like that idea? Short bread and lemons? That's the most obvious invention since monkeys climbed out of the trees and said, "by jove, man! I've just had an idea for a round thing to help us get around. I shall call it the wheel!" Then all the monkeys went down to the local pub for a pint while they watched a bit of footie.

Regardless, these cookies are good. In their basic construction they're shortbread, infused with flavor and topped with icing. The Toast-Yays are shaped like sliced of bread and their icing is brown-ish in color while the Lemonades are, naturally enough, shaped likes slices of lemon with yellowy frosting on their butts. Aside from those minor differences these two are basically the same cookie as far as the baking process is concerned. It's in the flavor, though, that one comes out ahead. 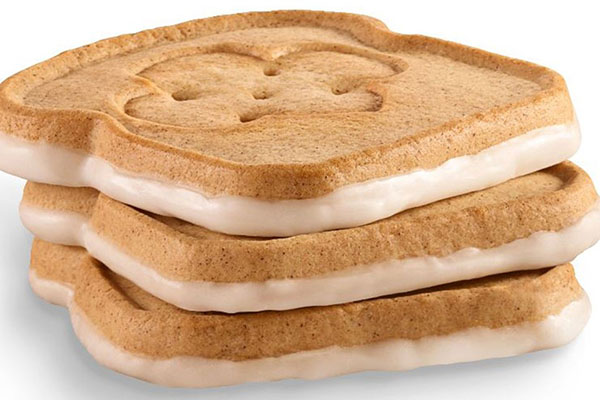 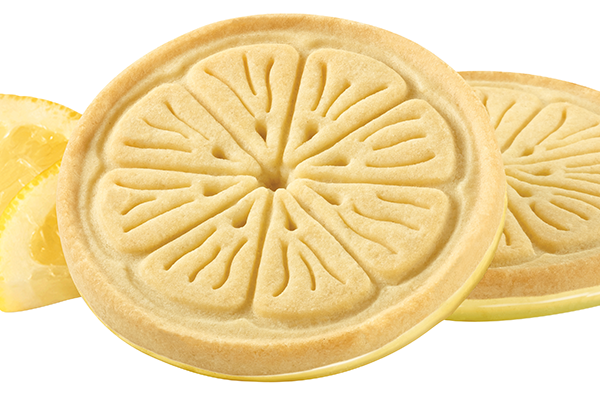 Of the two I find myself preferring the Lemonades, for a couple of reasons. To start, the Toast-Yays don't have nearly as much maple syrup flavor as I'd like. When I hear "French Toast" I expect a string syrup flavor. I buy the Extra Dark grade of Maple Syrup for home use because I want to taste the maple. Here the maple is just a hint, there but covered by thick icing, sugar, and cloying sweetness. it just doesn't have the right balance. They aren't bad cookies but they certainly aren't what I'm looking for.

On the flip side, though, the Lemonades are perfection. They have the same shortbread consistency as the Toast-Yays, that lovely crunch that isn't too dry, and then their icing is perfectly flavored. The lemon taste is strong and it helps to balance out the sugar of the icing, generating just the right tang in the mouth. There aren't many cookies I would put in a cart alongside my beloved Thin Mints but the Lemonades have earned their spot. They're really good.

Not everything I tried that was all that great and that brings me to the sad addition to my last cart, the Adventurefuls. Billed as "brownie inspired", there are certain expectations one has for a cookie like that. Soft, chewy, with a strong chocolate flavor. Instead what I got was something that really didn't amount to much of anything, let alone a cookie that could, in any way, advertise itself as "brownie inspired". If this is how your brownies turn out you need to stop baking.

The cookie is chocolate, thicker than a wafer, that's then toped with caramel creme, caramel drizzle, and a hint of sea salt. That's a lot of flavors going on all at once, much more than the usual "one idea carried to perfection" you normally get from Girl Scout Cookies. All the favors actually feel like they cancel each other out; you expect strong chocolate, powerful caramel, that salt on the back end. Instead you just get a bite of what can only be described as "generic cookie". It's lifeless and not what I expected from the look of the cookie. 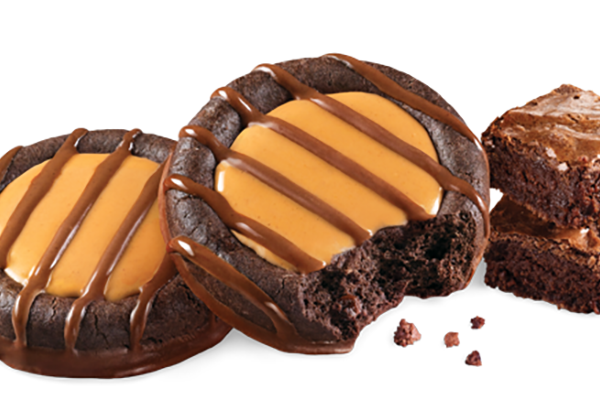 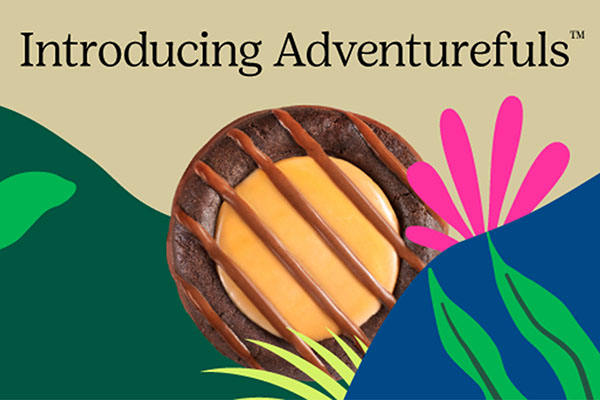 Worse, even the mouth feel was bad. The cookies I got, fresh out of the bag they came in, were dry and hard, not at all what one would expect from something that was attempting to be "brownie inspired". Now, there's a chance that what I got were Adventurefuls from the lesser of the two cookie bakeries (ABC Baker instead of Little Brownie Baker, the two companies that handle all Girl Scout Cookie production), but still, it's hard to see how this cookie could really be improved. It would take a lot to make a cookie this boring into something special. This was just bad.

In short, you owe yourself a better adventure than the Adventurefuls. Don't even bother with them.