This is What All the Fuss Was About?

Any kid of the 1980s and 1990s will have a certain fondness for Pizza Hut. It's not that their pizza is the best -- it's honestly pretty middling, all things considered -- but there's a nostalgia that come with the Pizza Hut brand. Many kids were indoctrinated to Pizza Hut due to the "Book It" program, getting a free personal pan pizza anytime we read enough books. The personal pans were tiny, but for a kid they were just the right size, and we got a free pizza! Who wouldn't love that? I loved going to Pizza Hut any time I earned a Book It Pizza, eating my little shitty pizza and then going to play Ms. Pac-Man on their tabletop machine (every Pizza Hut back then had a tabletop Ms. Pac-Man; I'm pretty sure they came preinstalled). Pizza Hut was just part of the experience of living in those decades. 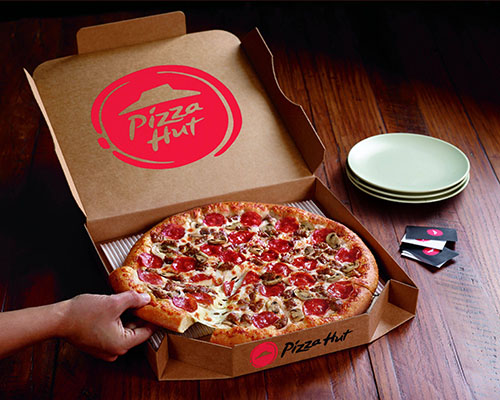 I'm not a kid so I don't qualify for Book It Pizzas anymore. Occasionally, though I do get the urge to each some shitty Pizza Hut Pan Pizza. I had that urge this last weekend so I put an order in and went to my local Hut to pick it up. I didn't check the order at the time, not until I got home, but they'd given me the wrong order. Instead of a pan pizza (large, because I'm both an adult and I hate my body) I'd been sent home with a stuffed crust pizza instead. Oh, and instead of my blazing hot buffalo wings I got cinnasticks. Suffice it to say I went back and got my correct order, but they ended up having me keep the other as well because they couldn't serve it again. Two pizzas for the price of one was nice, but really it gave me an excuse to finally try stuffed crust.

Yeah, you read that right: I'd never had a stuffed crust pizza before this last weekend. I never felt the urge. If I was ordering a Pizza Hut pizza I wanted a pan pizza and nothing else would do. But since it was just sitting there, well, it was time to try it and see what I was missing.

So here's something I didn't realize: stuffed crust pizza is a thin crust. I don't much care for thin crust pizza; they're either too crispy, and I have to be in the right mood for that, or they're too floppy. Whatever the case, they also lack the substance I want in a pizza (at the very least I want a mid-range hand-tossed with some heft to it). All the body of a stuffed crust is in its crust, with that ring of cheese inside. The pizza itself was lackluster.

The star of the show, if you can call it that, is the ring of cheese. I'd always expected it was just a cheese stick rolled into crust, but that was just me being a closed-minded jerk. I hadn't tried it, I couldn't really judge. Now, though, I have tried it and, well, yeah, it's just a cheese stick rolled into a crust. Not even a really good cheese stick either; the crust I got, which was just the plain old original stuffed crust, was a pretty bland ring of cheese that frankly felt a little powdery. It was not good cheese, but then, what would you expect from Pizza Hut. 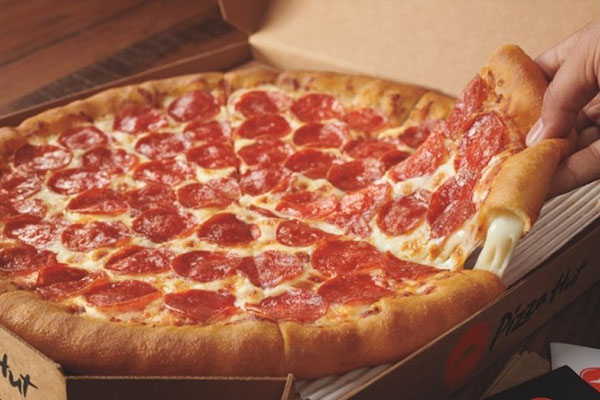 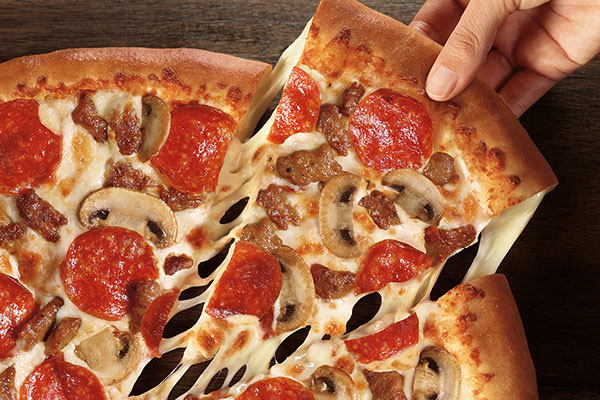 Lest you think the ring of cheese was simply too cold to be properly served, I have to ask how one would get a ring of cheese that wasn't slightly congealed and a little nasty? I got this thing straight from the Hut, took it right home (and home is only a couple of minutes away) and in that short time the cheese was already kind of gummy and gross. It wasn't hot and melty like what was on the rest of the pie. It was just... there. I was unimpressed bu the cheese stick in the middle of the crust.

Plus, the crust itself it pretty bad. Too crunchy and crispy to balance out whatever softness was there in the cheese. It was just the wrong mix of textures, a half-congealed crust that simply sucked. I ate a couple of slices for science and then set the rest aside. In the five minutes or so it took to get the pie home, realize it was the wrong one, call Pizza Hut, and be told to come back and get a new one, the crust had become unappetizing. Pizza is meant to be eaten over the course of an hour, sitting around, watching a movie enjoying the pie as you party. Stuffed crust is not a party pizza. Even if you can get it hot and fresh and right in your mouth right that moment, it's already past its expiration date. That's just sad.

Having now had stuffed crust pizza I can assure you I will not be getting it again. I'd rather have a pan.

Which, speaking of, the pan pizza I got by the time I got back to Pizza Hut was much better. Of course, Pizza Hut has been making this pie for decades. It's not great but they've at least perfected their mediocrity. When you order a pan pizza you know exactly what you're going to get. It's the classic Pizza Hut experience: three parts greasy cheese, one part regret. My wife, who can't eat gluten or cheese, misses that regret. She hangs out over my pizza, smelling it and wishing she could regret what she just ate.

The point of a pan pizza is to get a thick-bodied pie. It's not a Chicago-style as it's not swimming in sauce; the pan pizza is mostly dough, greasy with a it of crunch around the edges. The first two slices are like heaven; a little salt, but with a spongy warmth that feels so nice in the mouth. You get that tang of sauce, the stringy cheese that almost tastes like something but not quite (Pizza Hut cheese being very bland), and the (in my case) a nice helping of salty pepperonis crisped up on top. It is so good that, after two slices you want to go back for a third. 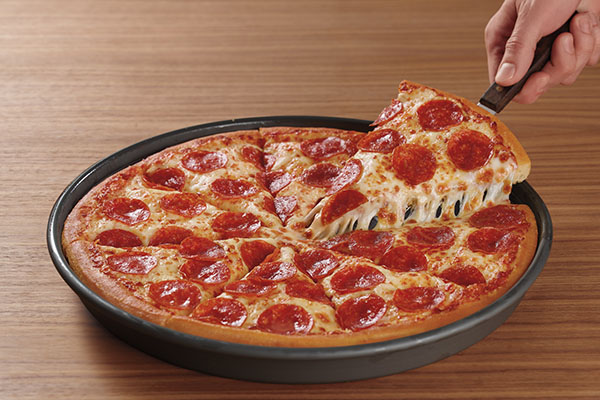 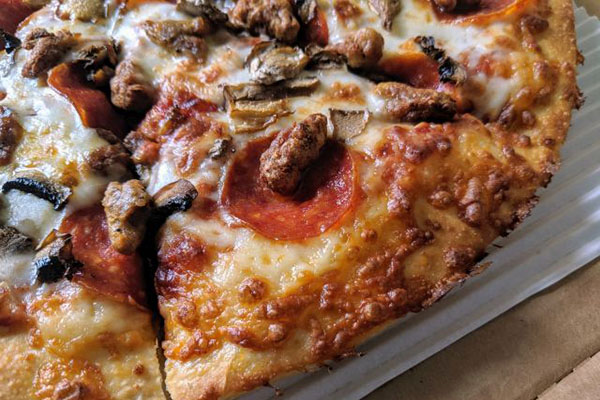 That is where folly lies. A third slice never feels good. It's too much; too much grease, too much salt, too much chew. Your body hates it the instant you start on it, but once you bite into a slice of pizza you have to finish it. That's a rule of civilization: you shalt not leave a piece of pie half-eaten. It's what separates us from the monkeys still living in trees, throwing their crusts on the ground. Once you start in you have to finish or you may was well move back to the jungle and renounce your humanity.

Of course, if you get a large (like I do) then you have five or six slices left over for later meals. A pan is great that first time, but it just doesn't reheat the same. It promises it can, it almost gets back to how it was when its hot right out of the microwave or toaster oven, but something is off. The grease starts to leak out, making every bite feel that much more regretful. It let's you remember how good things were while knowing you can never recapture that feeling again (not until you get another pie).

In short, if you want a Pizza Hut pan pizza you're best to do it with friends who can help you finish off the pie when it first arrives. That or live alone and be free of judgment. Live you best life destroying your body one slice at a time. And remember, this comes from someone that likes this pizza.

I'm one of those people that feels like a pizza order isn't complete without a set of wings on the side. When I order pizza I get wings, and I want them as spicy as I can get. Pizza Hut, to their credit, does have decent wings. Generally I like their wings, although I will admit this last batch I got wasn't the best; the guy who sauced them (who was also the one that screwed up my order) didn't put as much sauce as I wanted on the wings. It was a thin drizzle that barely touched any of them. My hot wings were mid at best, bland at worst.

Well, the lack of sauce made them seem bland but it did let me appreciate what Pizza Hut gets right about their WingStreet wings: the texture is just right. Pizza Hut, I'd guess, puts their plates of wings through their pizza over (I know other pizza places do this I just haven't seen it done at the Hut). In their case that hot cooking over, combined with the type of wings they get from their supplier, leads to wings that have just that right rendered fat on chicken skin texture. It's just a little chewy, but with a satisfying mouth feel. I really love that sensation as I eat these wings. 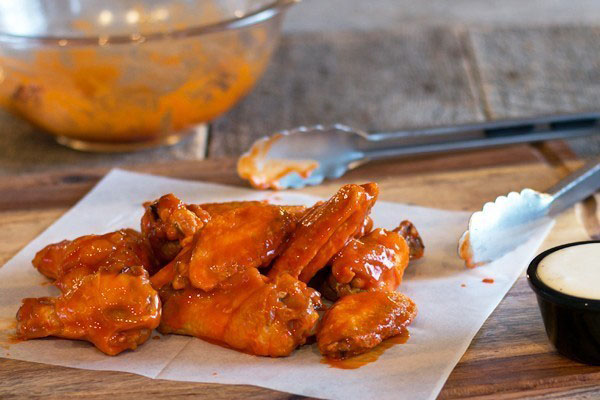 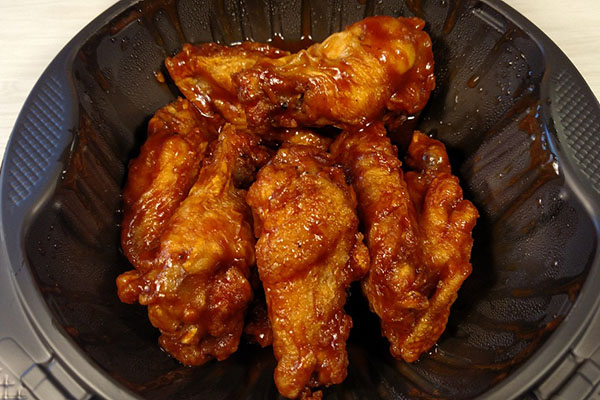 Now, if you get it with enough sauce on there, the wings are fantastic. In my opinion the best set of wings are the ones where you have to wipe off your mouth and hands with a napkin after every bite lest you leave the restaurant looking like you just murdered someone because of all the sauce dripped all down your front. This batch of wings I got didn't do that but other orders of Hut wings I've had in the past have been just right. I think this order was a fluke.

Which leads me to the real point of this whole ordeal: check your orders when you pick them up. I was a fool!