Italian is a genre I tend not to cook very often. I like the food but I have to be in the right mood for it. Italian, at least the stuff we're used to here in the States, tends to be very heavy. Lots of starch, lots of cheese, lots of weight on the stomach. If you're trying to be healthy, Italian is not the way to go... and yet it's so damn good. You just want to bathe in all the cheese and sauce while the delicious smells fill your house.

I had a craving for Italian and while I was originally intending to just order from a nice place in town, I realized that once I drove over there and drove back it would take almost the same amount of time to get that food as if I'd made it myself. Add to that the fact most Italian joints don't have stuff my wife (with her gluten and lactose issues) can eat, and the stuff they do have is sub-par to what I can make. In the end it just made more sense to buy the ingredients and make it all at home: cheaper, easier, better, and safe. So that's what we have to present today:

This was one of the few dishes at the Italian joint that my wife liked, but sadly they removed it from the menu since the last time we'd been there. That was one of the big reasons we went with cooking at home: if we can't get what she wanted, and we were just going to make this one dish to replace it, what's the point in getting anything yes from the joint? And it really is a good dish.

I do cheat and buy pre-made sausages (raw ones, at least, from the meat section of the store). I suppose you could make sausages yourself, freshly ground and stuff them in your own casings, but, man, that sounds like a lot of hassle. I'd rather just buy them (and that's a refrain you're going to see a lot here). 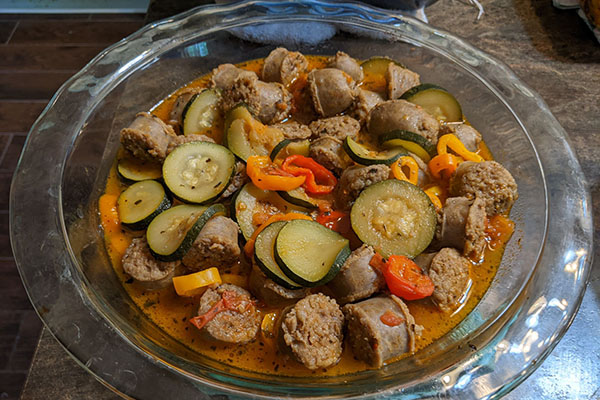 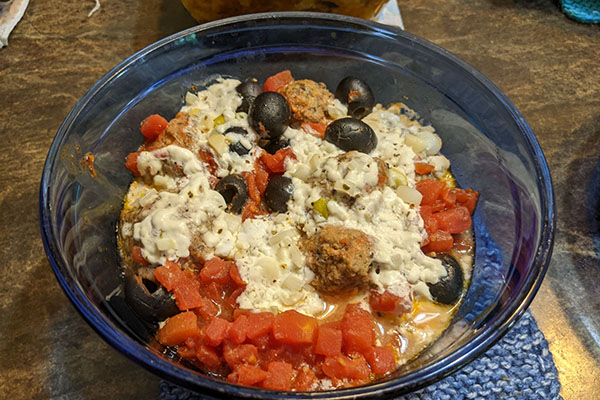 I like meatballs but if I'm putting them in spaghetti I want them really small so I can get a nice bite of noodles and meatballs all at once. But if I'm having them as an appetizer then I want much bigger meatballs. I went them to seem substantial all on their own. These are meatballs you'd want in a sub, for example. Good, hearty boys.

The trick to a good meatball with really nice mouth feel, though, is not the meat; it's the bread. You want a slice of bread, ground up and added to the meat, to give the ball just the right amount of squish. Use whatever sliced loaf bread you have in the house (I use a gluten free sandwich bread so my wife can eat it, and it works great, so I know any bread will do).

Don't worry about making a big cheese mixture as we're going to use the rest of it in our baked noodle dish coming up in a bit. Also, you can use either cottage cheese or ricotta in your cheese mixture. I know some don't like ricotta, saying it has a weird, gritty feel, but I really like it. Meanwhile, if you have someone with a lactose issue (like my wife), Lactaid makes a good cottage cheese that bakes up properly in Italian dishes.

I was originally going to make eggplant parm as a part of the meal, but once these slices came out and my wife sampled them she didn't want them in anything; she just wanted to snack on them. They really are great, so while you can make them into a parm they are also excellent on their own.

The trick with the coating is the starch. This was something I picked up from Japanese cooking as they fry not in flour but in starch as it makes a more "glass like" coating that's extra crispy. With a dish like this I like to do equal parts starch, flour (in deference to my wife I use King Arthur's Measure for Measure gluten free flour), and panko bread crumbs (again, you can get them gluten free), which adds a thick but crispy texture with a nice mouth feel.

You can use corn starch in place of potato starch, but my wife also has an issue with corn starch so I found a nice substitute. 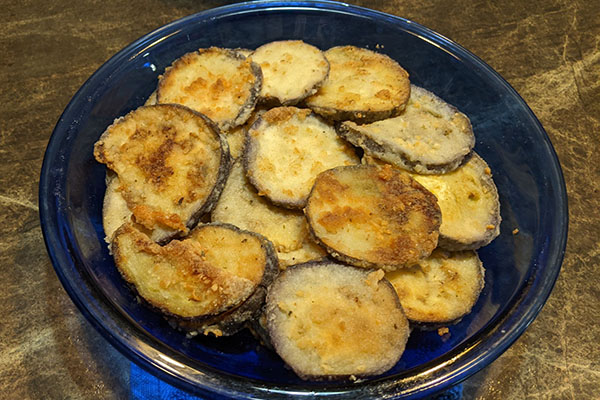 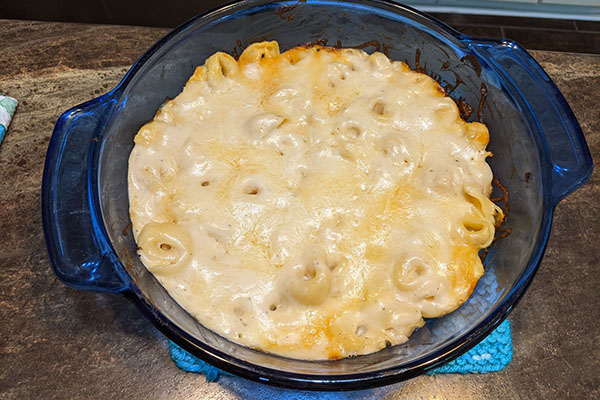 Here, again, I cheat (and I do it twice). While it's possible to make your own tortellini, I neither have a noodle maker nor the desire to make my own noodles. Store bought ones are pretty good and you should be able to find "boil and serve" dry noodles in your grocery store.

I also don't make my own alfredo sauce. I could, and it's not the hardest sauce to make, but considering my wife's lactose issues I just don't have that many ingredients in the house to make an alfredo from scratch. Plus, honestly, bottle alfredo from a store is pretty good, so why bother?

This isn't a dish my wife can eat as neither the noodles, nor the sauce, are safe for her (nor do they have a readily available alternative that's anywhere near as good). This one was just for me.

This is the primary dish for the cheese mixture we made way above. This will use up your entire container of cheese (whether ricotta or cottage) plus about half a bag of shredded Italian cheese in the mix. More shreddies will go on top because you need lots of cheese in a good lasagna.

The baked noodles, in my opinion, aren't as fancy looking but, from experience, gluten free lasagna. noodles suck. They're too gummy and have the wrong texture. By agreement I don't use them for my wife anymore; she much prefers a baked gluten free rotini instead. Same ingredients, more or less, just in a different mix. 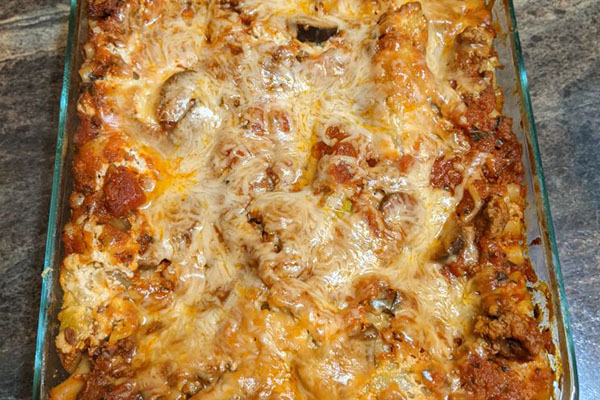 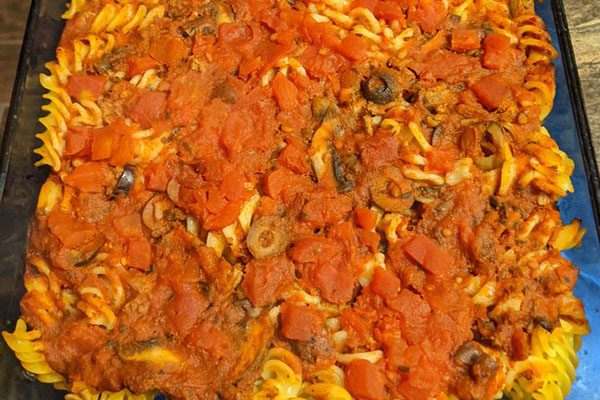 And with that your feast is complete. If you actually want to make all of these at once, and then serve the whole meal family style, I recommend starting with the lasagna in the over first while you get the tortellini ready. Then put the tortellini in, followed by the meatballs. Once they're all over baked, turn the oven down to about 170 or so to keep everything warm without continuing to over cook it all. Then you can make the sausages before placing them in the warmed oven. The eggplants should be made last in this big meal so they can make it to the table hot and crispy.

So yeah, there's the whole meal. Make it in parts, or as a whole, but certainly: enjoy!