Part of an (Im)balanced Breakfast

Growing up my mom didn't buy us sugared cereals. She wasn't a fan, probably because they were loaded with sugar and rotted our teeth (which, yeah, that's fair). But what that ignored was that I was a kid and sugary cereals are amazing. Which is probably why, the second I could buy any of them on my own I did -- my first purchase, if you are curious, we Apple Cinnamon Cheerios, and they were amazing (still a favorite in my books). That probably explains why, periodically, despite the fact that I'm an adult now and should know better, I'll cruise the cereal aisle and look for weird flavors to buy and try.

That helps to explain the three selections we have today for review:

When I saw the box for this concoction I was instantly horrified. It's not because the idea of chocolate and berries sounds bad to me -- far from it -- but just because Cap'n Crunch is not exactly known for its realistic flavors. If you've ever tried Crunch Berries you'll know that they taste less like berries than a chemical bath that once dissolved a strawberry a few years ago and still has the lingering remains of it stuck in a filter somewhere. They aren't bad (occasionally I feel the need to grab a box for the hell of it), but to say the Cap'n can realistically depict flavors would be an absolute delusion.

Of course, chocolate in cereals is a lot easier to fake -- Cocoa Krispies (another favorite of mine) does a fantastic job of making a chocolate flavor cereal work, and those have existed for decades. Surely the Cap'n, in all his nautical breakfast wisdom, should be able to make a chocolate cereal that could pair with whatever monstrous flavor the berries have picked up. It would have to taste like chocolate and chemical berries, two stand-byes of the the breakfast aisle, right? 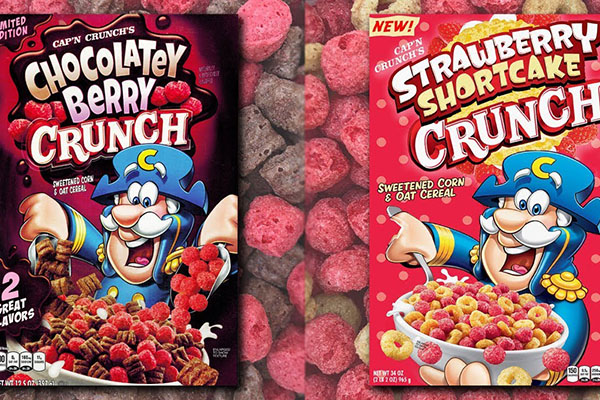 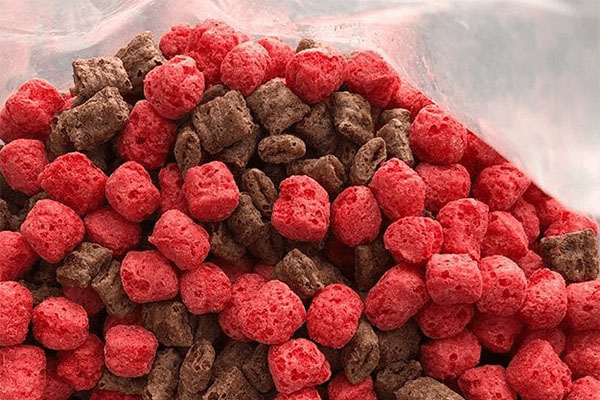 Well, weirdly, Chocolatey Berry Crunch doesn't really taste like much of anything. The chocolate isn't all that prominent (not in comparison to, say, Cocoa Krispies), nor do the crunch berries have a very pronounced flavor. That last part surprises me, in fact, because if you're ever have Cap'n Crunch with Crunch Berries you'll know that the chem-berry flavor gets all over everything. That whole box smells and tastes like crunch berries, through and through (which is part of why I never bothered with the Oops All Berries cereal -- how much more berry flavor could they really pack in). So shouldn't this cereal at least taste like berries if nothing else?

I have a feeling this is a case of two great tastes that actively cancel each other out. The chocolate might just be strong enough to mute the berries, but the berries are still a dominant flavor so they're fighting back against the cocoa. Whatever it is, this just taste like extra sweet Cap'n Crunch -- not bad, but no where near as good (or as bad) as the label promises.

Not that apparently there's also a special Strawberry Shortcake Crunch, which sounds god awful, but I haven't seen it in stores so I can torture myself with it. Maybe one day...

My wife, basic bitch as she is (her words), loves Pumpkin Spice. Personally I hate the stuff, in all forms, but then I'm not a fan of pumpkins, or cinnamon, or nutmeg, so clearly I'm not the target demographic for that particular flavor combination. Pumpkin Spice tastes to me like Chai, and I hate Chai because it tastes like pumpkin and cinnamon and nutmeg, so we're pretty clearly outside the bounds of anything I'd watch to eat. She loves the stuff to pieces, though, so when a box of Pumpkin Spice Cheerios rolled through our local breakfast aisle, that was a must buy. Again, if nothing else, it had to be horrifying, right.

Once again, though, the label on the box defies us. When you first open the box, yes, the cereal does smell of Pumpkin Spice (so, instantly, I wanted to wretch). Once you pour it out and pop one of the oaty circles on your mouth, though, you'll find it doesn't really taste like much of anything. There's a hint of something, maybe a touch of cinnamon, but it's really just sugar-frosted Cheerios (and they already have that cereal -- it's called Frosted Cheerios). 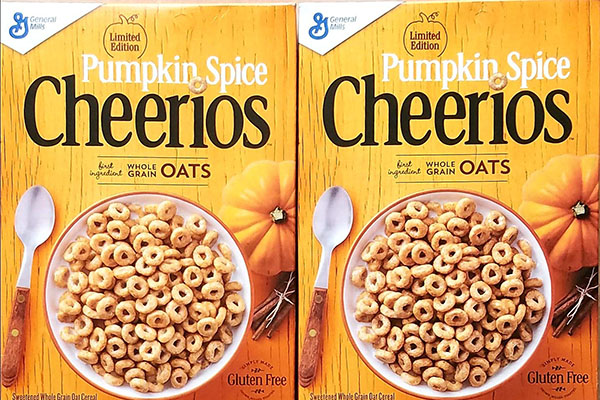 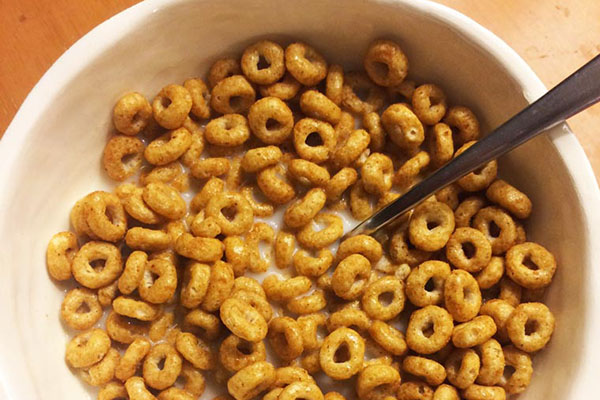 My wife was especially displeased because she was promised Pumpkin Spice but her basic bitch cereal was too basic even for that moniker. They were fine Cheerios, but little better than the original flavor, and certainly nowhere near as good as Honey Nut in her mind (and far inferior to the gem of the collection, Apple Cinnamon). For someone with a passing interest in Pumpkin Spice, a dabbler but not a connoisseur, this might be an okay flavor. For someone hoping for that basic bitch flavor to permeate the whole of their mouth, this cereal fails.

Now here we come to the crown jewel of this year's random finds (so far). As with the previous two featured cereals, I bought this because it had to be bad, right? Who thought, "let's take a waffle, something soft and buttery, and make it into a hard, oaty cereal," was a good idea? What kind of mad scientist, a monster in their breakfast field, came up with this abomination? Has 2020 been that bad that the gates of hell have opened and a cereal from the other side was dumped into grocery stores to destroy our sense of right and wrong?

Fact is, though, this cereal is pretty damn amazing. So far I've bought three boxes of the original, Maple flavor, and the damn stuff is just so good. So good. The pieces are large but with just enough give, not even as firm as Cap'n Crunch (which many people complain cuts their mouths somehow). And the flavor is spot on, with a delightful maple flavor that puts a glow in your mouth. There should be no reason this cereal tastes as good as it does (or smells so good when you open the box) but it does. This is a must buy, believe me. 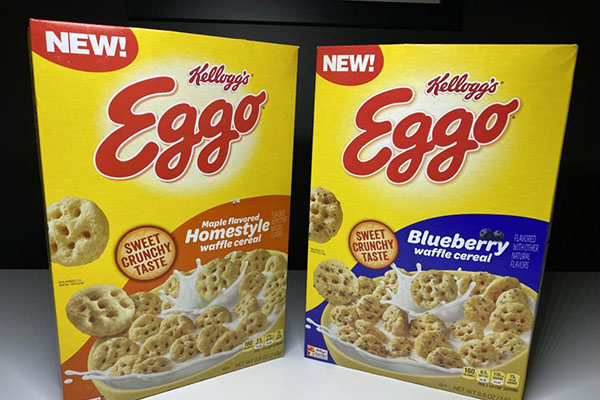 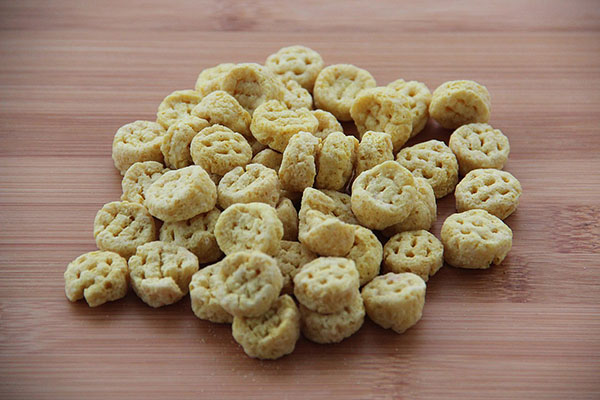 Of note, the original cereal, which apparently came out all the way back in 2006, featured Maple and Cinnamon flavors, but after existing for a few years, the cereal was canceled (until fan requests brought if back last year). Since they, two flavors have existed: Maple and the new Blueberry. I haven't tried the berry flavor, I will admit, because the Maple stuff is so good I don't wanna ruin it. One day, though I will attempt it and see if maybe, just maybe, one of the cereals it the gateway to Hell my mouth anticipates.

Still, go to the store now (or as soon as the Coronavirus lock-down is over) and get a box of this stuff. It's seriously amazing.