It Came Out of the Fog

It's probably an understatement to describe Stephen KingRising to fame with the release of his first book, Carrie, Stephen King is one of the most prolific, and most successful, American authors (in any genre, not just horror). as simply a "prolific writer". Over a career that's spanned six decades (at the time of this writing) the author has written over 60 novels not to mention hundreds and hundreds of short stories plus a smattering of novellas. He has one of the largest bibliographies of any author around, living or dead. And, on top of all that, barely a year goes by where there isn't some kind of adaptation of one of his works coming out of Hollywood (right now three adaptations are coming in the next year and another 14 are planned for the future). Prolific barely scratches the surface. 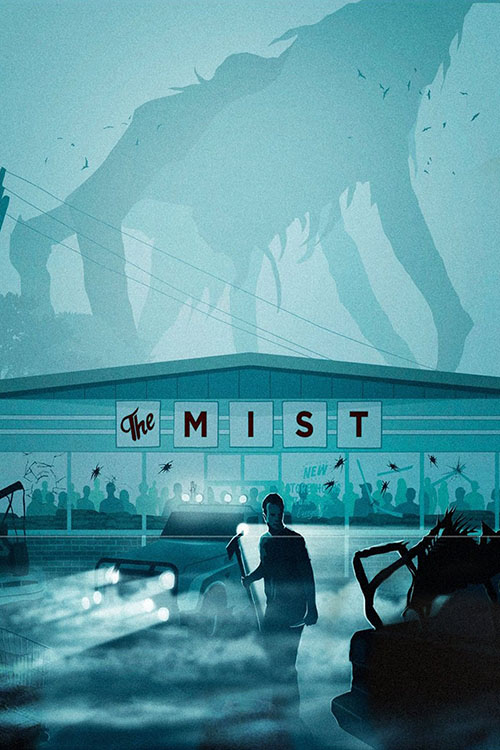 While his novels have served as Hollywood fodder for plenty of works, the short stories also have seen their fair share or interpretations. Considering that a King short story is often the length of a standard novella, his novellas are true novel length, and his novels are biblical-length tomes, that only makes sense. Not all of his shorts have really worked well adapted for the screen -- what works as an idea for a solid short story may not have enough meat to carry a full film, even at Stephen King's length -- but in the right hands his better works become fantastic movies. When it comes to those that can work magic with Stephen King there's probably no one more successful than Frank Darabont.

Darabont came up in Hollywood as a writer on horror movies such as A Nightmare on Elm Street 3: Dream Warriors, The Blob remake, and The Fly II. His horror cred made him a natural fit for King's works but, interestingly, Darabont's first King adaptation was the drama The Shawshank Redemption, a magnificent work that has only gained in appreciation over the years. Since then Darabont then went on to work on other King works, The Green Mile and, the subject of this article, The Mist.

Like a few of King stories, "The Mist" is focused on two things: the end of the world and monsters from another world. A small town in Maine (because it's always a small town in Maine) sees a massive storm late one night and then the next day a thick mist rolls into the town. A father and his son are at a grocery when the mist comes in, and then soon after creatures start to appear within the mist. Massive, weird, alien, deadly creatures that attack anyone they get a hold of. No one is quite sure where the creatures are from, but it's pretty clear that the mist is their atmosphere and, as long as the mist is out there, the world belongs to the creatures.

As with a lot of end of the world stories, though, the dangers of "The Mist" aren't really the monsters outside the story but the people slowly going crazy within it. A mad, religious woman in town had to be at the store that day, and her preaching and calling the creatures a blight upon the sinful Earth from God slowly starts winning the people in the store over, especially as the days drag on. Soon enough it becomes clear that it's probably safer outside the store than within, even with the monsters outside. With Hell on Earth, who are the real monsters? 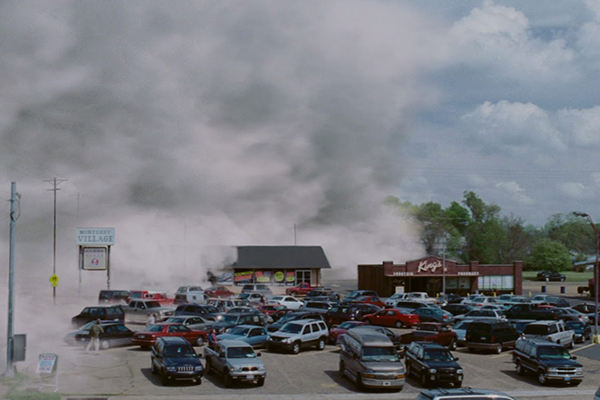 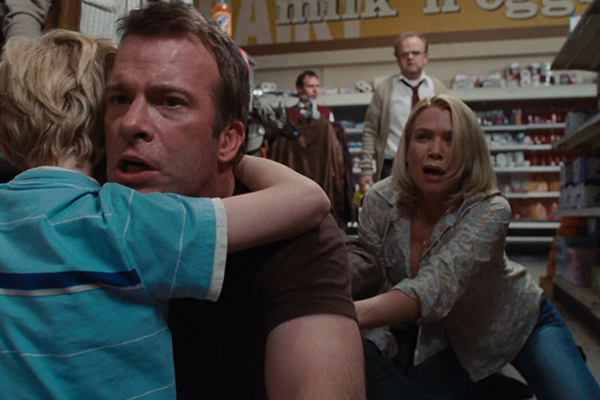 Darabont takes the whole structure of the story and creates a wonderfully built and lived in world. Taking the framework of the story (which was first included in the Dark Forces anthology before being included in King's own collection Skeleton Crew), Darabont adds in extra characters, small subplots, and a slightly wider vision for the people in town. This helps to make the world of The Mist feel real, at least until the monsters show up.

Where the film is at its weakest is with the creatures in the mist. This is, in large part, because the creatures are all created with CGI and don't feel very real. They certainly look spooky, and there is some decent gore in their encounters with the humans, but by and large the menace of the creatures, the promise of what they can do, is far scarier than anything we actually see come out of the mist. This is a problem with a lot of horror monsters, the fact that less is more, and Darabont never quite gets hold of just how much of his monsters he really needs to reveal. He shows too much, too often, and it makes the monsters feel far less interesting because of it.

That said, Darabont is great at mining horror and drama from human characters. The religious zealot, Mrs. Carmody (Marcia Gay Harden), is the true terror of the story. Her over-the-top religious words, the venom she shows to everyone, and the way she thinks that anyone that doesn't believe exactly what she believes is less than her, shows who the real monster is. Once people start dying, and she digs her claws into the minds of the people in the store, this is where the true terror comes from. I think Darabont wisely knew this, and while he had to show the monsters (because the original story did as well) his mines much better tension within the grocery's walls.

As far as the cast in concerned, I have to say that they actually do a respectable job with the story they're given. Although I don't think Thomas Jane is always the best actor (although he's certain gotten better and better over the years), he does a commendable job as a father just trying to keep his son alive in all this craziness. He's joined by an absolute plethora of actors we'd see again in another Darabont work, The Walking Dead, including Laurie Holden, Jeffrey DeMunn, and Melissa McBride. These actors sell the story so much better than any CGI monsters could, and the film is much richer for their work. 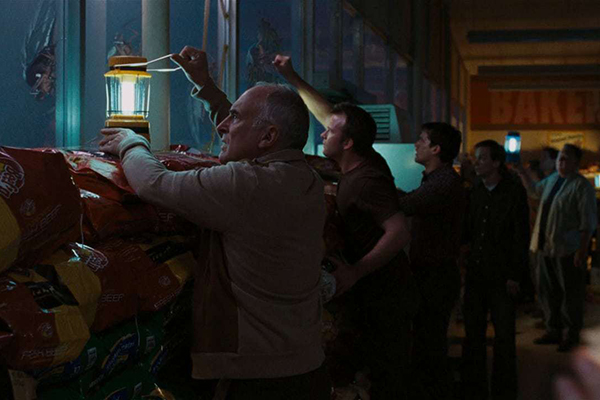 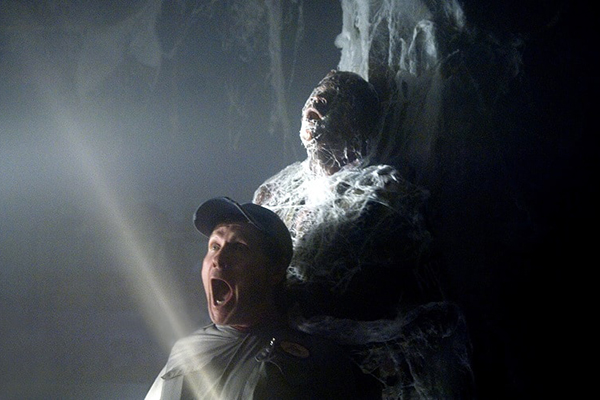 Of course, when addressing this film (15 years after its release) we have to discuss the ending of the movie (and spoilers for a film long past its "safe harbor" spoiler date). In the original short story "The Mist" ends on a very slight up beat with our hero and a few survivors having fled the store, driving down the road when, over the radio, they hear faintly "Hartford", meaning there might be rescue on the (literal) horizon. The movie, though, goes for the jugular with a bleak ending. Instead of finding hope, our heroes decide no one is coming to save them once their car dies. So Tomas Jane's David shoots everyone else (including his young son) and then steps out into the mist to die... only for the mist to clear up as the military rolls in, saving the day. It's fucking bleak, an absolute gut punch of an ending that, somehow, makes the horror even better. Not only did he kill everyone else but he didn't have to. Damn.

That ending is what elevates this film, too be sure. It's not a bad movie up to that point, but I'd argue it doesn't really add much new to the "end of the world" genre. Things go to hell and it ends up being the humans, not the monsters, you have to worry about? Yeah, that's every end of the world story. But to then twist the knife like that right at the end, that's what truly makes this movie work. The ending is the real draw and once you get to that you realize that Darabont really knocked it out of the park.

If the ending plays for you then The Mist has to rank among the best King adaptations, to be sure. it takes a decent, if middling, effort and makes it something far better. So long as you get to that point you'll be in for one of the best, and darkest, King adaptations to be sure. So if you haven't seen it (and you skipped that spoiler above) then give this film a watch. It's worth it.