Having sat through two The Blob movies so far, I do have to wonder what inspired someone to make a third movie in this ill-fated franchise. I mean, yes, when a studio owns a franchise they are likely to want to capitalize on it every few years or so -- bear in mind that there are still rumblings about making another The Fly films, this despite the fact that David Cronenberg's 1986 remake is a masterpiece and doesn't need any further continuation (as proven by its sequel), and that was a series of movies that are generally well regarded. The same can't really be said about The Blob. 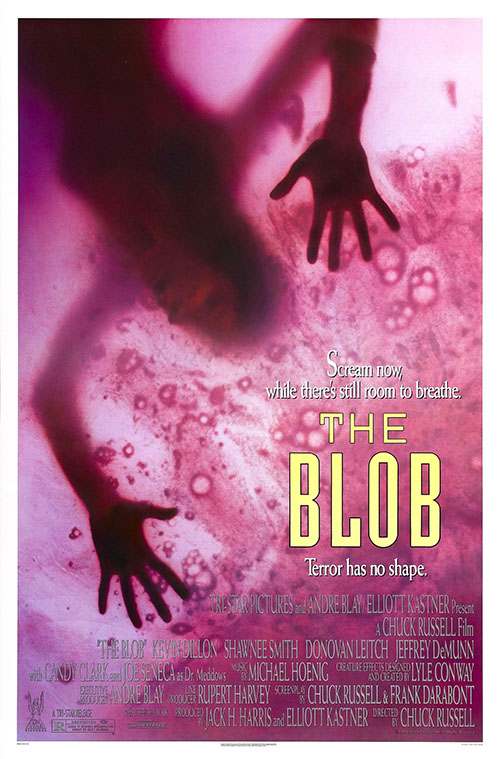 Yes, the 1958 original film did make a decent amount of money, pulling in $4 on a shoe-string budget, which is impressive for the time, but that was all due to the power of an early Steven McQueen performance. The sequel, Beware! The Blob didn't have that going for it (or much of anything else), and, like a gelatinous substance caught in the arctic, The Blob lay dormant until someone decided to disturb it in 1988. SO why did this happen?

I think the answer really boils down to two movies: the aforementioned remake of The Fly in 1986 as well as 1982's incredible monster/sci-fi remake, The Thing. These two movies proved, to varying levels of success commercially, that there was a market for horror-filled remakes of cheesy old 1950s sci-fi. The Blob, being one of the big successes of that era, had to seem like an easy mark. Polish it a bit, ratchet up the gore, and boom: instant 1980s classic.

Well... not so much. While the film does correct a a number of issues I had with the previous films -- for one it actually lets you see what happens with the gooey monster starts eating away at a human -- it still doesn't quite hit the mark of being true horror. I think, maybe, this is because the creature itself, while scary in theory, doesn't have much of a personality to really fear. The Blob doesn't hold a candle to Brundlefly or suddenly monsters that burst out of characters we thought of as heroes in The Thing. Instead, it's a mindless mound of pink ooze that is conveniently always right where the narrative needs it to be to put our heroes in danger. It lacks something for us to latch onto, so all we really have are the main characters around the monster, and a lot of creature effects.

On the latter account, this film does manage to deliver. A big issue with the original film was the period it came out in: you just couldn't show a human being liquefied by an acidic creature back in the 1950s (the Hayes Code and all that). The 1970s sequel didn't try any better both due to a lack of budget and the desire of the creators to make a "horror comedy", and watching someone get dissolved was probably something they didn't find funny (this despite films like Evil Dead II and Dead Alive proving gore could be funny). This film, though, goes for the hard R and revels in being as gross as possible. 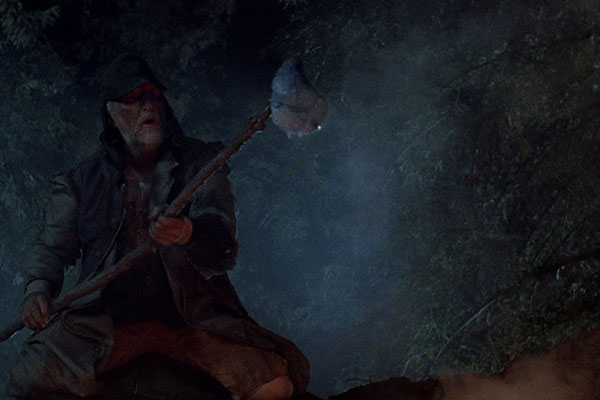 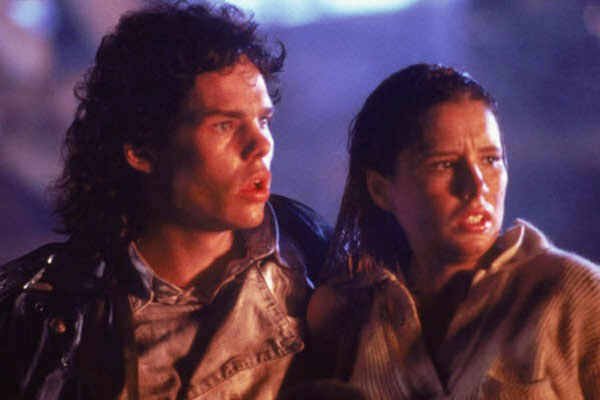 The film gets us to the gore pretty quickly by taking the original concept of 1958 film and twisting it for a solid fake-out. High school all-star Paul Taylor (Donovan Leitch) takes head cheerleader Meg Penny (Shawnee Smith) out on a date, has a run-in with town bad-boy, Brian Flagg (Kevin Dillon, later of Entourage fame, and that's kind of sad), and then all three of them have to take the town bum to the hospital when they find him with a glop of... something, on his hand. But where the original film focused on the all-star jock hero (as was the way of the 1950s), this movie has him get attacked by the Blob (which already has eaten the elderly bum, leaving only have his body melting away), killing off our supposed hero.

It's a pretty solid sequence, with the kid getting trapped in the goo, Meg trying to pull him out of it, and her only managing to free his arm (which spurts blood as it pulls away). From there we get a number of other attacks, with people ending up in the goo and slowly dissolving before us, people getting hollowed out by the monster and collapsing inward before out eyes, and plenty of up-close monster attacks. In that regard, then, the film is a success because if all you want are solid, practical creature effects, this movie does deliver.

At the same time, though, the movie just can't quite sell the concept. This coming out in the late 1980s, its influenced as much by the original movie as the era it came out in and other movies with a similar bent. There are shades of Aliens here, with an evil government organization showing up to try and claim the monster to use in their military experiments (citizens of the town be-damned). Plus, of course, there's plenty of Communist conspiracy nonsense spouted by the military guys. "Oh, yes, it's all for the good of the country," at a time where people really didn't trust that anymore.

I remember this film coming on (admittedly on broadcast TV so a lot of the good creature effects and gore had to be edited out) and enjoying it then, but going back to this film now it doesn't really hold up. It's a film of an era, for sure, depicting a town like a slice of 1950s Americana while showing how thin that veneer really is. And while that's still accurate to an extent it also feels like a bygone era that's hard to relate to. It doesn't help that the only two solid actors in the film are Dillon and Smith, with the rest of the cast filled by overly-broad character actors or kids that can't act at all. Things are just off enough that it never quite jells together (some pun intended). 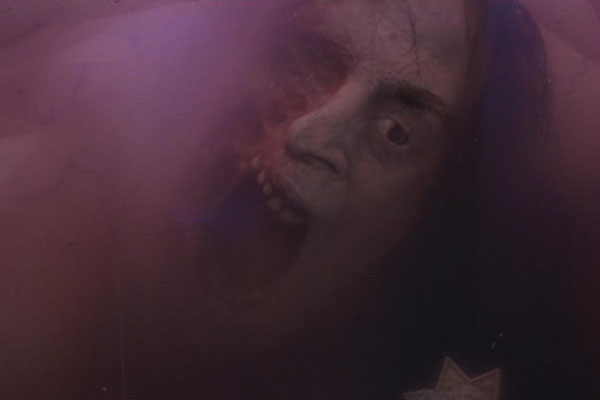 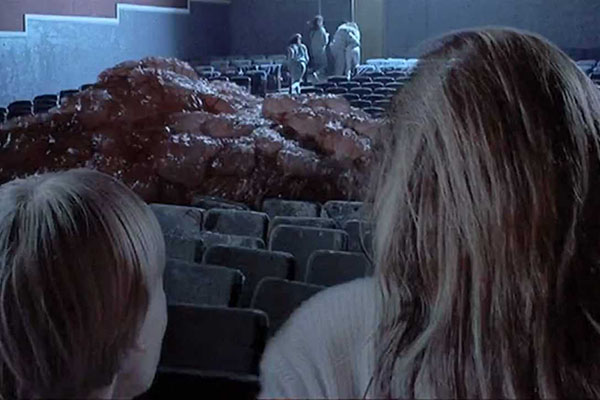 I didn't hate the film, and I want to make that clear. While this film didn't win me over the way the 1982 The Thing or the 1986 The Fly did, it is fun as a low-budget, unassuming creature feature. It fills about the same niche as the 1958 original, giving a little burst of creature horror without burning its way into your memory (and I promise that's the last pun). It's fun for what it is, just neither so good to stand out as a classic, nor so bad that it became truly memorable. It's a B-movie, through and through, and good enough to watch once because of it.

Thankfully, though, we were spared the possible sequel the film tried to hint at (an early case of a post-movie stinger), nor did we have to suffer the threatened Rob Zombie remake (which, ugh, I'm very tired of his films after his two HalloweenThe franchise that both set the standard for Slasher horror and, at the same time, defied every convention it created, Halloween has seen multiple time lines and reboots in its history, but one thing has remained: Michael Myers, the Shape that stalks Haddonfield. misfires and appreciate that Hollywood didn't make me suffer through that as well. Still, in the right hands, maybe this monster could be good. I just still don't know how you sell a movie with the splashy villain (in more ways than one) has no actual personality. If you give it a voice, it's more of a killer tomato at that point, but without that personality you have to insert some other kind of villain as well, which dilutes the story.

So maybe it's for the best that Hollywood hasn't managed to find a way to make another one of these. This remake, while not great, very well might be the best version we can hope for.