They're All Gonna Laugh At You

Although I know its considered a Stephan King classic, and was the book that really set his career in motion, I have to be honest: I don't much care for Carrie. Although hailed at the time I don't really feel like the story has aged all that well. It might be one of those novels (and films, for that matter) where you had to be a teen in the mid 1970s for the story to resonate. It just hasn't ever done it for me, coming at the story as I did two decades later (even though I was in high school at the time). 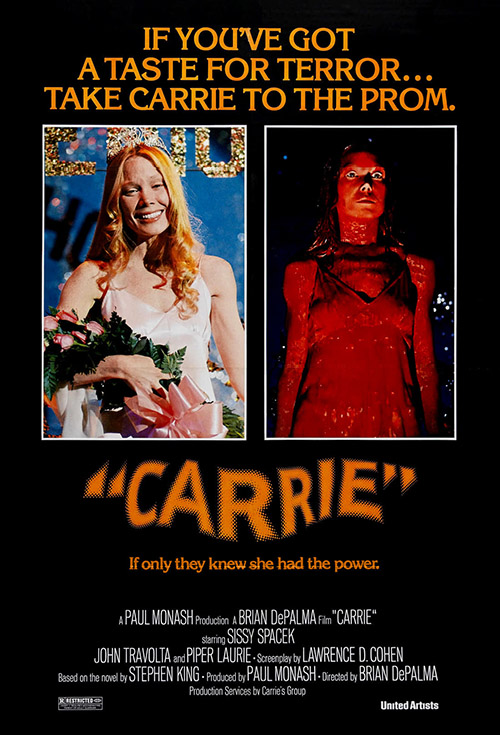 The issues it addresses -- bullying, being ostracized, having the popular kids "make an example of you" -- haven't exactly gone away in the 45 years since the book came out, but the story isn't exactly subtle about things. The characters come across as pretty basic, more there to fill the roles ascribed to them than feeling like real people, which weakens much of the structure of the story. And while the climax is appropriately grotesque, it also feels like a massive shift for the story and the main character. Again, it's not subtle at all, but then, as it was the first novel the writer ever had published, there were some growing pains in his work that should be expected.

The novel, published in 1974, was quickly snatched up by United Artists for a film adaptation. The film, like the novel, isn't subtle at all. Hell, if anything, it actually makes the characters more grotesque, the writing even less nuanced. The film is 98 minutes of rushing through the beats of the story, taking our titular character from one form of abuse to another all before she unleashes in the climactic scene we're all familiar with (and which is spoiled by the theatrical poster). Then the film punishes her again just for good measure before it ends. It follows the bones of the novel, yes, but the way the movie is put together more like a Passion Play where the lead character is constantly abused. Likely that's a purposeful directorial decision (mirroring the fanaticism of the lead character's mother), but that doesn't make it any more enjoyable to watch.

Carrie White (Sissy Spacek) is a sheltered girl, raised by an extremely religious mother (Piper Laurie), and who is picked on by essentially all the other girls in school. After gym class, Carrie heads to the locker room with all the other girls so she can shower, but while bathing she starts to bleed. It's her first period, but Carrie doesn't understand that, so she freaks out and begs the other girls for help. In response they yell at her, over and over, and pelt her with feminine products. The gym teacher, Miss Collins (Betty Buckley), rushes in and comforts the girl, explaining eventually what's going on with the blood, and the Carrie is sent home early. All the girls, meanwhile, are punished with a week of extremely athletic after-school gym class as punishment, although school "mean girl" Chris Hargensen (Nancy Allen), refuses to accept the punishment, so her privilege to go to Prom is stripped. This sets Chris on a path to plot some revenge on Carrie.

Carrie, meanwhile, has trouble at home. Revealing to her mother that she's had her first period, mother Norma freaks out, calling her a sinner (for being a woman) and repeatedly punishing her for her body's natural process. Whether the constant torture, or her own natural skills finally coming out as she blossoms into womanhood, Carrie discovers around this point that she has telekinetic powers. Her mother, being the absolutely sane and reasonable woman that she is, calls her daughter a "witch" and threatens her life. Carrie, however, declares that things will change around the house now that she has powers and, after cute boy Tommy Ross (William Katt) invites Carrie to the prom (at the behest of his girlfriend Sue Snell, played by Amy Irving, to make up for the gym incident), Carrie tells her mother she's going to Prom and that's that. However, things at Prom aren't going to go well for Carrie (there's a bucket of pig's blood with her name on it), and then, to put it mildly, Prom is going to be ruined for everyone. 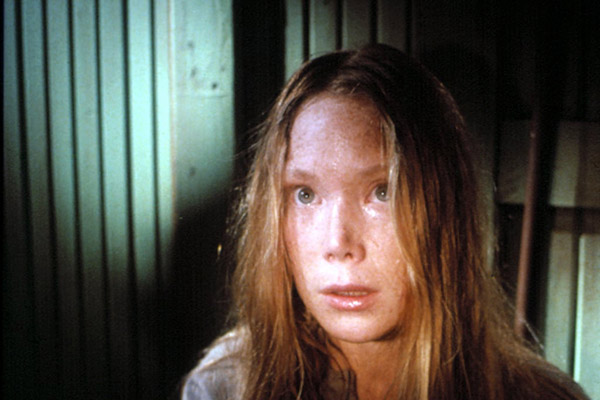 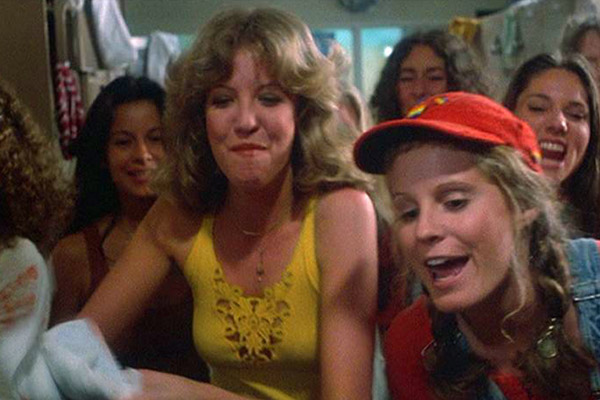 I think a major part of my issue with the story of Carrie is that I really don't see an arc for her character. She starts our ostracized and hated by the rest of her school, but while she gets telekinesis, which makes her feel empowered, she never really changes her position in her life or the school. The film starts with her mother hating her for being a woman and ends with her mother hating her for being a witch, while the mean girls in school blame Carrie for their own actions (and the punishments that come after), and they continue to hate Carrie right up to the moment where Carrie loses her cool and causes the school to catch on fire and explode.

It would be one thing if Carrie spent time, with her newfound strength and powers, building herself up. If she came out of her shell, found ways to gain friends around school, managed to elevate her status externally to reflect the power she felt internally, that would show and arc and growth. Then, when the bucket of blood is inevitably dropped on her head, ruining her perfect Prom moment and revealing that some people will never let her be a complete person, Carrie unleashing her powers to their fullest would feel like a truly horrifying moment. "I tried to do things your way, to find a way to fit in, and this is what I get?"

I also hate the mother, especially in this version of the story. Her religious extremism is so over the top, played with frothing-at-the-mouth passion by Laurie, that the character seems like a cartoon. While the scenery chewing performance is fun in short bursts, the mother never comes across as a fully realized character. Again, she seems to serve the purpose of setting the Passion Play in motion -- Carrie gets punished repeatedly, and then eventually she dies at the hands of her mother (and her own power as she expires) -- but there's no nuance to it. A little more depth for the mother so we could actually understand how she became the fruitcake nut-job she is and what led her to take it all out on Carrie would go a long way to adding shading to her villainous role. We'd still hate her but we would at least understand her.

But then, the same can basically be applied to the other villain of the piece: Chris. Yes, she's a mean girl, and it's easy for bullies to blame the abused for their own comeuppance, but at the same time Chris blaming Carrie for what happens to her feels so out of left field its illogical. Carrie gets a week off of gym and avoids all the girls that abused her, and then the teacher puts them in gym hell, and it's only after a day of it that Chris quites and gets her Prom privileges revoked. And, somehow, all of this is Carrie's fault. After that, within the timeline of the film, Chris is already plotting her revenge against Carrie, to take place at Prom, before Carrie is even invited and confirmed to be going. Chris's logic, on both fronts, makes no sense especially since, if she's mad at what happened, she should be plotting her revenge (a) against her teacher and (b) in such a way that actually fits the person she's punishing. 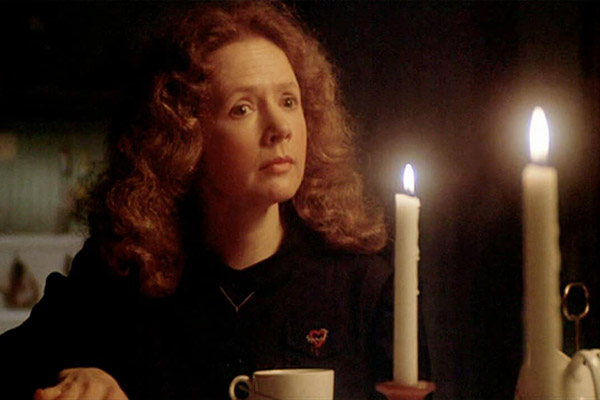 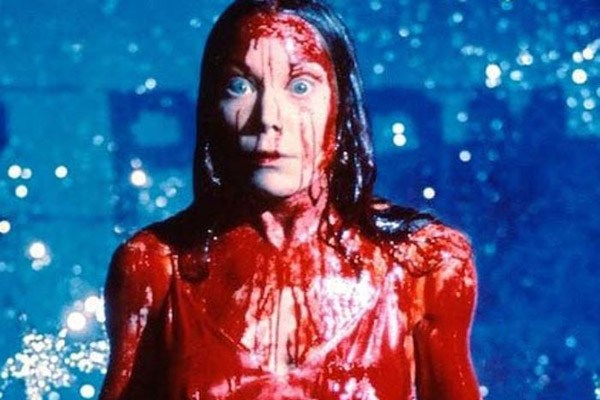 The whole point, of course, is for Carrie to start the film covered in blood and then to end it the same way, of course. It's an iconic image, and I guess Chris is trying to communicate here that she thinks Carrie is a "pig" and also to rub the gym incident in her face again. The imagery is strong, and the end result is pretty potent, I just don't follow the logic of it all. Chris, start to finish, is villainous teen with barely-there characterization and motivation. Someone this willing to go to such extremes should have been expelled from school years before, but then if she had such a hate boner for Carrie you would think she'd be a constant presence in in Carrie's life, always making it hell (instead of just crossing paths with the girl at the start and end of the film).

There are just too many flaws in this film, in short for me to get into it, and that's just with the story. There's also the matter of how its filmed, both with the direction of an After School Special, but the lustful camera work of skin flick. That opening scene, with Carrie in the shower, gives us long, lingering shots of all the girls in various states of undress, and even take its time watching Carrie from up close. I'm not sure what the director was trying for there, maybe to lull us in with one thing and then have the horror take over after, but it sets a tone for the film that it never quite shakes. "Carrie is a quiet and reserved girl who doesn't understand she's a woman now, but lets leer at her like she is one, and then constantly leer at the other girls in the film afterward," just doesn't work for me.

I just don't like this film, in any way, at all. Perhaps I'm in the minority, or maybe it just hasn't aged well after all these years. It was certainly a success when it first came out, making $34 Mil against a $2 Mil budget, which was good enough for various studios to try, and try again, to make some kind of series extension for the film (a sequel, and then two remakes, to follow). But this film right here simply doesn't do it for me. The whole intent of the production, from the director's eye to the characters and the story, leaves me cold. I feel bad for Carrie, for sure, but that doesn't mean I get invested in her here. Everything that happens to her feels inevitable because this film doesn't eel like it ever takes place in the real world. It's a cartoony film with a lustful eye that feels at odds with what should be the intent of the story. This is one film that is probably better left in the past.