Time to Pop Some Corn

Children of the Corn

As we track our way through all the Slasher films and franchises I can dig up, we've naturally come to one series I kept putting off for as long as I could: Children of the Corn. The reason for my reticence is simple: where other Slasher series -- HalloweenThe franchise that both set the standard for Slasher horror and, at the same time, defied every convention it created, Halloween has seen multiple time lines and reboots in its history, but one thing has remained: Michael Myers, the Shape that stalks Haddonfield., Child's PlayAlthough some might have thought that the idea of a killer doller slasheer flick couldnt' support a multi-decade spanning franchise, Chucky certainly proved them wrong, constantly reinventing his series, Child's Play to stay fresh and interesting three decades later., Nightmare on Elm StreetThe brain-child of director Wes Craven, A Nightmare on Elm Street was his answer to the glut of Slasher films that were populating the multiplex. His movie featured an immortal character, Freedy, with a powerset like none other, reshaping the expectations for Slasher movies to come., for example -- generally start strong before seeing a drop in quality as the sequels continue onwards, the same can't be said for the Children. I went out of my way to watch most of these films back in the day and the "best" film of the bunch could only be considered tolerably mediocre. Most of these films are simply bad. 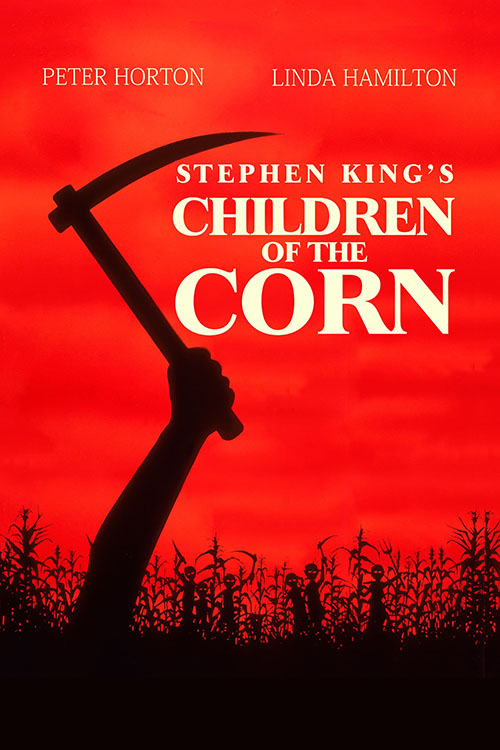 The first of the films in the series, 1984's Children of the Corn, is one of the better films, but that's only by comparison. This is a dull, stupid movie that, had it been named anything else (i.e., without that all important Stephen King connection) would likely have bombed at the Box Office. But it's (very loosely) based on a Stephen King short story and, thus, the producers could put "Stephen King" at the opening of the film (calling it "Stephen King's Children of the Corn" drastically over-estimates how much of this material comes from the short story) and sell the film for all it was worth. It's not worth much, but they still sold it to the tune of $14.6 Mil on a less-than-$1 Mil budget. Not a bad return.

That said, this film is also the lest "slasher" of all the films in the series, containing a relatively low body count (especially if discount the first scene of carnage right at the start of the film). The series would get more and more slasher-like from here, with the body counts going up (alongside the stupidity of the already stupid characters). This first film, though, is more of a thriller with eventual paranormal elements, and it's also the one film that's closest to King's original story (although only by a hair). It just sets the precedent that all you had to do was attached King's name to whatever and you could make a film. They just, generally, weren't very good.

In Children of the Corn, we open with a massacre. A group of teens, led by preacher Isaac (John Franklin) and his lead disciple Malachi (Courtney Gains), surprise the adults in town by killing all of them. And I do mean all of them as (we eventually learn) anyone over the age of 18 has to die. The reasons for this aren't initially clear but it eventually comes out that Isaac, through his teachings, leads the kids to believe that being an adult is a sin, as is anything to do with the modern world, and everyone from outside the collective of children in the town has to be eliminated.

It's into this setting that was see Burt Stantion (Peter Horton) and Vicky Baxter (Linda Hamilton) arrive. The two are driving cross-country to an internship for Burt (as he's a doctor-in-training), but their drive is interrupted when one of the children (who has just been attacked, and was bleeding from a slice across his throat) stumbles out into the road. Burt, who's driving, doesn't see the kid until its too late and runs the boy over. This leads Burt and Vicky to dump the body in their trunk and then drive off to the nearby town to find authorities. Unfortunately what they find, instead, are the children of the corn and they aren't at all happy to have two adult "outworlders" in their town. 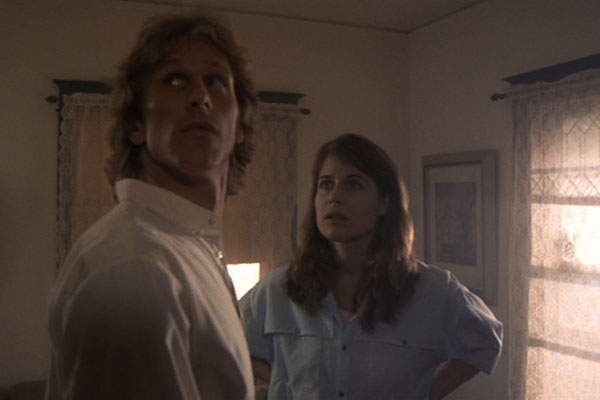 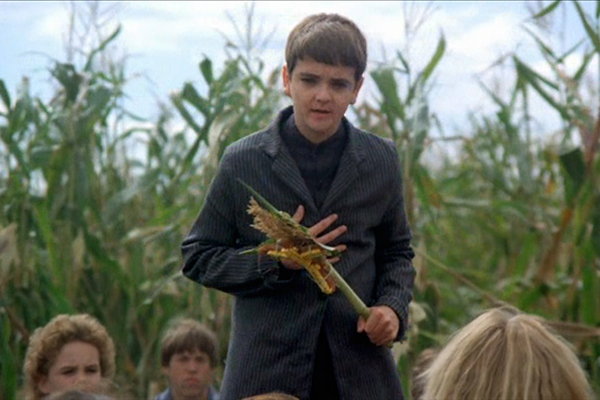 I have a number of issues with this film, but before we get to them I do want to note that the basic idea of the story, that of crazed, murderous children hacking up adults that wander into town, is certainly interesting. There are strong horror vibes you can get off a story like that, as King did in his original short story, and the producers wisely tried to tap into that here, casting a bunch of crazed kids to play the crazed killer kids. Nothing about this film works, but the movie does get a fair bit of natural momentum just from the strong idea.

That said, everything else about this movie is dumb, and that starts with our two leads. Along I liked Horton and Hamilton in these roles, as they're strong, charismatic actors, their characters are complete idiots. There's the obvious fact that they were driving while distracted, which they shouldn't have been doing. Then there's the fact that the kid was repeatedly stabbed, and had a slice across his throat that he's holding onto, and the doctor in the car never once comments, "hey, this kid was brutally attacked before I ran him over. Maybe going to the nearby town to report isn't the smartest idea as the crazed killers could be there." Even then, once they get to the town, find it abandoned and desolate, warning bells should have gone off for them and they should have gotten out as fast as possible.

But they don't, and they have a meandering stroll through the town trying to piece everything together. This is, of course, the next big problem: this film has an absolutely sluggish pace. There's easily thirty minutes of actual story stretched out to an hour-and-a-half, with the most interesting part of the film being that opening massacre. From there we take forever to learn about our two leads, then spend longer with them as they're not in the least bit freaked out by this strange town. It just goes on and on.

That said, the pacing issues could be a by-product of the fact that all the child actors suck. They were clearly told to overact as hard as they could, and they do, but it's so comically bad that you can't get interested or invested in them. It doesn't help that we really only meet two kids for most of the film -- the only two good kinds in town, Robby Kiger as Job and Anne Marie McEvoy as Sarah -- while the rest of them aren't given any real motivation or character background until the last 15 minutes of the film. It's impossible to care about them, or try to understand their motivations, when the film keeps all big plot developments buried until the last section of the last act. 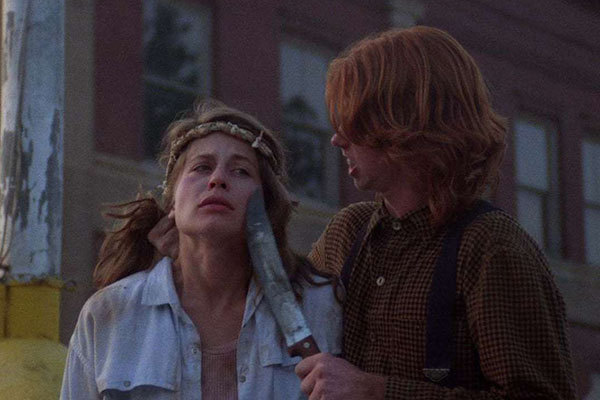 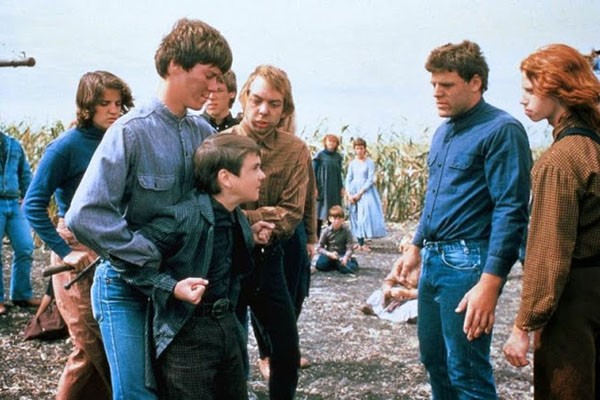 Just about all of this, of course, is a by-product of the fact that this is a feature length film based on a short story. This isn't like adapting one of King's novels, which are giant tomes filled with story and plots the script writers can pick from. Everything in the short story "Children of the Corn" had to be fleshed out, given more substance than was in the original tale, just to hit 90 minutes. Most of that is done simply by padding the run time, but as a consequence of the short story keeping all its cards close to its chest the film does the same thing; it works in the story, it doesn't work here.

Although it was a hit at the time, and went on to spawn an 11-film franchise (only three of which saw theaters), it seems like most people have developed the same opinion I have for this film (and series): it sucks. This is nothing but a misfire, a good idea crafted into the wrong kind of media, and then dropped on audiences looking for more King flicks. They might have bought it back then but it seems like, at this point, no one is interested in what this franchise is selling. Well, other than me, as I stupidly bought all these films a while back and now I get to suffer through the whole series again.

Wrath? The children of the small town decide they don't need adults anymore, that the modern world is evil and then children need to run the town and tend to the corn. So they kill all the adults.

It's a group effort, with the leader of the children, Isaac, leading his "flock" to a diner so they can poison, and hack up, the adults in there. It's a gruesome affair, by 1980s standards, with death by meat slicer being a particularly nice touch.

We have the opening sequence where the children take over the town, killing at least seven on screen (although more die off-screen, as per the story). Then we have four kills, with one of the kids dying as they try to leave the town (through the corn, a big mistake), then the killing of the old coot that runs the gas station (who serves the role of the "harbinger"), and then eventually the child preacher (who maybe becomes undead) and the teen that tries to usurp his place in the flock.